Infections after anterior cruciate ligament reconstruction (ACLR) are rare. No cases of Salmonella infection have been described to our knowledge.

We describe a rare case of Salmonella infection in a 23-year-old patient following an ACLR. The patient presented with subacute septic arthritis, 26 d after a hamstring autograft ACLR. The pathogen, Salmonella enterica typhimurium was isolated by bacteriological sampling of the first arthroscopic lavage. Two arthroscopic lavages were required, with intravenous antibiotic therapy for two weeks with cefotaxime and ciprofloxacin, followed by oral antibiotics with amoxicillin and ciprofloxacin for a total duration of three months. This approach treated the infection but two years after the septic arthritis, faced with ongoing knee instability due to graft damage, a revision ACLR with a bone-tendon-bone graft was performed. At the last follow-up, full range of knee motion had been achieved and sports activities resumed.

Infection after ACLR is rare and requires an early diagnosis and management in order to treat the infection and prevent arthritis-related joint cartilage destruction and damage to the graft.

Core Tip: Infection after anterior cruciate ligament reconstruction (ACLR) is uncommon, with staphylococci found in more than 90% of cases. We present herein, an exceptional case of Salmonella infection after ACLR. This case highlights the importance of early diagnosis and management: arthroscopic washing for acute infections or arthrotomy for late infections and appropriate antibiotic therapy. The purpose of the surgical treatment is to prevent arthritis-related joint cartilage destruction and to protect the graft.

Septic arthritis after anterior cruciate ligament (ACL) reconstruction (ACLR) is a rare but severe complication, with an incidence between 0.3% and 1.7%[1-3]. The main responsible pathogens are Staphylococci (coagulase-negative and S. aureus) and Streptococci[2,4-6].

Salmonella spp are Gram-negative bacilli, belonging to the enterobacteriaceae family and responsible for digestive infections. Contamination is mainly caused by the consumption of raw or undercooked food (meat, eggs, and dairy products), or food contaminated by the excreta of carrier animals (more rarely by direct animal contact). After a short incubation period, these pathogens are responsible for an inflammatory intestinal syndrome with mucoid bloody diarrhea. Extra-intestinal complications, including osteo-articular complications, are rare (< 1%) and associated with haematogenous spread[7]. Typhoid fever is caused by Salmonella spp and osteo-articular complications occur in less than 1% of cases, arising in one of three possible ways: haematogenous spread, contiguous source, or as a result of vascular insufficiency[8]. The risk factors include sickle cell anaemia, diabetes, systemic lupus erythematosus, lymphoma, liver diseases, previous surgery or trauma, those at extremes of age, and steroid use[9].

We report herein a rare case of Salmonella enterica typhimurium following ACLR. To our knowledge, this is the first case of septic knee arthritis after ACLR due to Salmonella spp.

Twenty-six days after an ACLR, a 23-year-old man showed a deterioration in his general state (asthenia, fever and chills) and local signs of an early knee septic arthritis: pain, heat, redness, and edema.

The patient reported an episode of abdominal pain associated with mucoid bloody diarrhea 10 d before the onset of the arthritis symptoms, which quickly resolved within 48 h. Further questioning on risk factors for Salmonella spp revealed the patient had eaten an egg-based picnic 24 h before these symptoms appeared.

This patient was suffering from chronic instability in his right knee, following a soccer injury. An isolated ACL injury was reported on magnetic resonance imaging (MRI).

Three months after the injury, an ACLR was performed, using a hamstring autograft (semi-tendinosus and gracilis). The procedure was performed under general anesthesia with a tourniquet at the proximal thigh for duration of 40 min. An outside-in drilling technique was used for the femoral tunnel. Femoral and tibial fixation was with interference screws.

The patient followed a standardized post-operative rehabilitation protocol aimed at controlled restoration of range of motion, muscle strength and proprioception. He was discharged the same day full weight bearing assisted with crutches. At 15 d after surgery, a routine consultation was performed to verify the absence of pain, hematoma, wound inflammation and/or serous or purulent discharge.

A collection in the external femoral approach site was confirmed.

A biological inflammatory syndrome was found with an initially raised C-reactive protein (CRP) of 51 mg/L increasing to 130 mg/L over the first 24 h (Figure 1), alongside a white blood cell count increase from 11000/mm3 to 13300/mm3 during the same period. 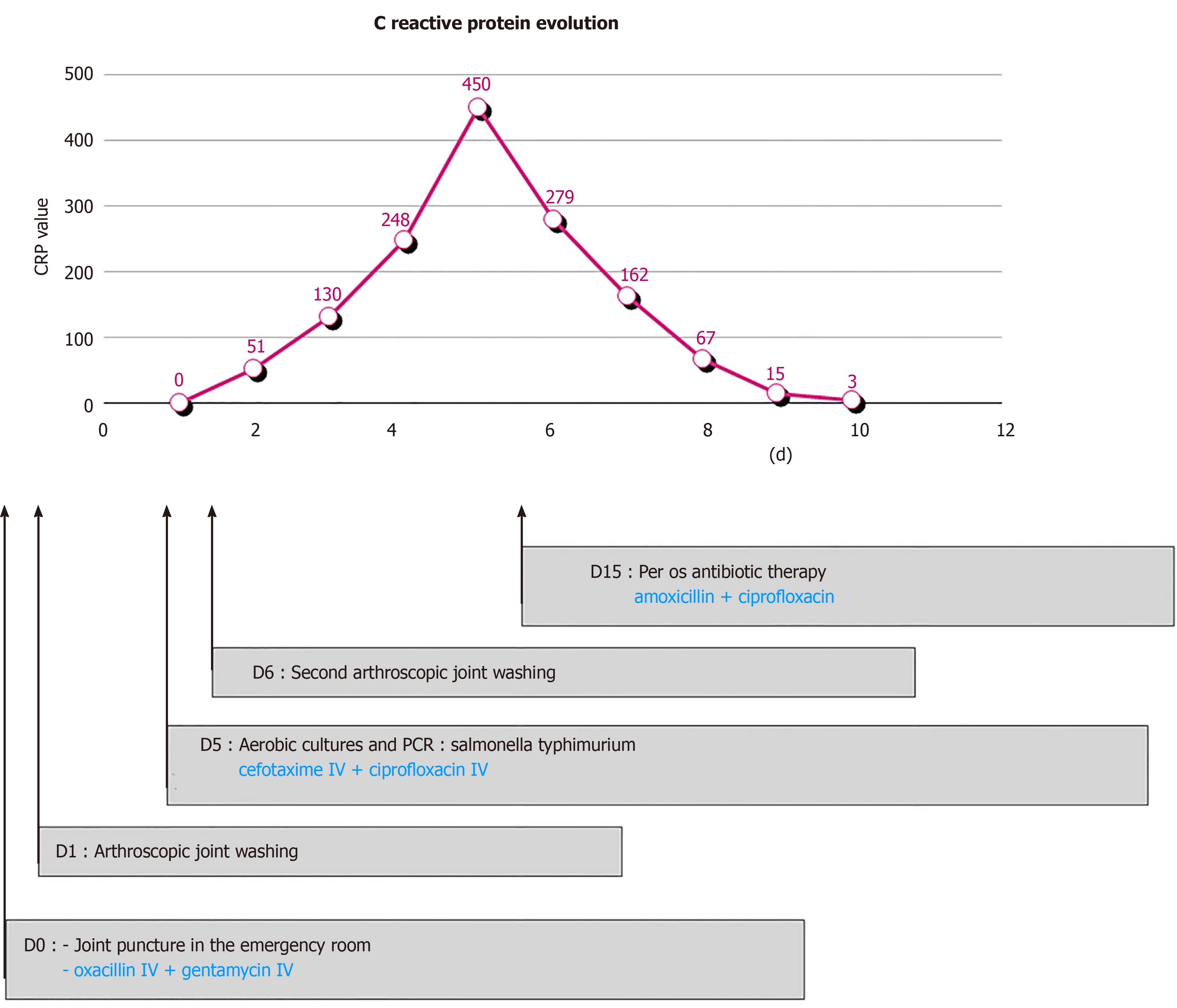 The joint fluid aspiration performed in the emergency room showed neutrophils at direct examination and was followed by administration of intravenous antibiotic therapy – oxacillin 2 g every 8 h and gentamycin – 270 mg/d.

An urgent arthroscopic joint lavage was performed the same day. The joint fluid was serous, not purulent. with few false membranes but without a clear inflammation of the synovial tissue. A surgical approach centered on the scar for the femoral tunnel, was also performed and revealed a separate collection apparently extra-articular. Multiple samples were taken for bacteriological analysis. Intravenous antibiotic therapy with oxacillin at a dose of 2 g every 8 h and gentamycin at a dose of 270 mg per day was continued pending bacteriological results.

This result was also confirmed by polymerase chain reaction (PCR) DNA 16S. Antibiotic therapy was modified to cefotaxime at a dose of 3 g every 6 h and ciprofloxacin at a dose of 400 mg every 8 h.

The clinical and biological evolution was not favorable, on the 6th post-operative day, a knee effusion and a collection in the external femoral approach was seen, as well as a biological inflammatory syndrome, with a CRP increase up to 450 mg/L (Figure 1). Therefore, a second arthroscopic lavage was performed. The external femoral approach was again opened and now revealed a purulent collection, communicating with the joint. Arthroscopy showed purulent joint effusion with false membranes and an inflammatory synovial tissue (Figure 2). 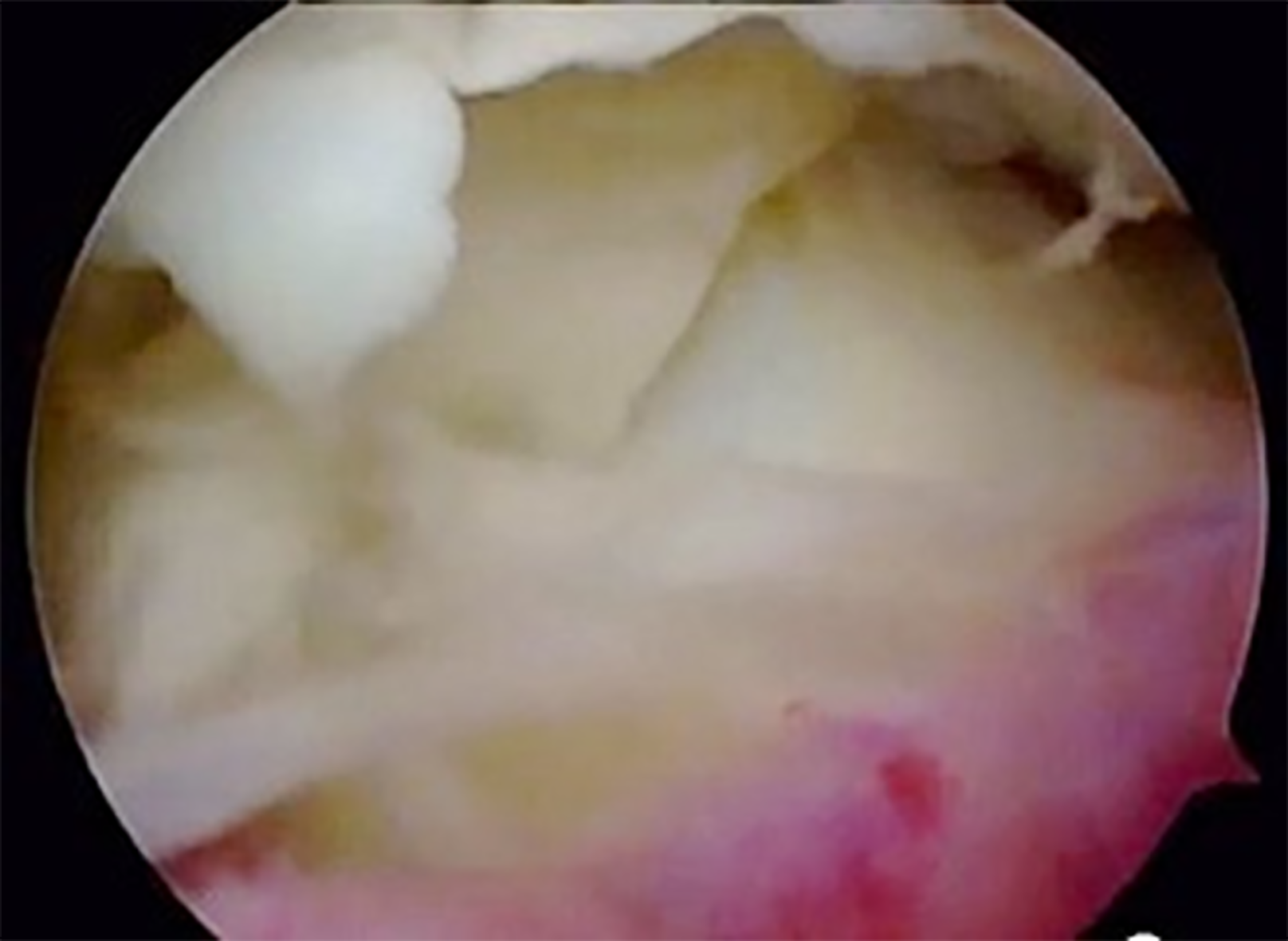 Two years after the septic episode, the infection was considered cured but a persistent knee instability (with positive Lachmann-Trillat and jerk-tests) persisted. Furthermore, MRI showed a partial rupture of the graft. In order to meet the patient's desire to resume a pivotal sports activity, a revision ACLR was scheduled, using a bone-tendon-bone graft reconstruction combined with a Lemaire procedure. Intra-operatively, a distended and non-functional ACL graft was found. Prophylactic antibiotic therapy with amoxicillin at a dose of 150 mg/kg/d in 4 injections was initiated pending the microbiology results of tissue samples. Antibiotic therapy was stopped on day 5, due to the sterility of the bacteriological samples.

We report an uncommon case of Salmonella enterica typhimurium arthritis in a young patient, following an ACLR.

Infections after ACLR are rare, and no cases of Salmonella infection have been described to our knowledge. The main responsible pathogens are Staphylococci (coagulase-negative and S. aureus) and Streptococci[2,4-6]. This case occurred early after ACLR, however given the history, haematogenous spread from the primary bowel infection is presumed.

Salmonella non typhi have been rarely reported as agents of arthritis. Salmonella is a Gram-negative Bacillus Enterobacteriaceae responsible mainly for digestive infections. The prevalence of joint infections with Salmonella is only 1%[7]. It mainly affects the native hip in children[10]. Some cases of Salmonella arthritis after total hip or knee arthroplasty have been described in the literature (Table 1).

Risk factors for bacterial blood-borne knee infections (old age, diabetes, polyarthritis and other immunodeficiency diseases as well as intravenous drug abuse) were not found in this patient, nor were other described risk factors such as concomitant meniscus resection or a history of surgery on the same knee[11].

For ACLR, hamstrings autograft has been reported to be a risk factor for surgical site infection compared to bone-tendon-bone graft reconstruction[5].

Septic arthritis is an orthopedic emergency. The gold standard of treatment is joint debridement and antibiotic therapy according to the culture results. Smith et al reported that enzymatic destruction begins by the eighth hour after the inoculation. By the 48th hour, 40% of the glycosaminoglycan is lost, and collagen breakdown occurs in a period of few days in septic arthritis[12]. Several studies have shown that the duration between the beginning of symptoms and surgical intervention is the most important prognostic factor for septic arthritis[13,14]. Early diagnosis and management are essential to minimize the risk of graft failure and osteo-articular lesions, which cause stiffness and chronic pain. It is recommended to hospitalise the patient and give the appropriate treatment within 24 h[1,15-17]. The reference treatment is as follows (Figure 3): first surgical treatment by knee debridement and lavage with attempts to protect the graft in most cases and then medical treatment by intravenous antibiotic therapy with penicillin (cloxacillin), initially targets the most frequently encountered pathogens (Staphylococcus aureus, enterobacteria and streptococci). 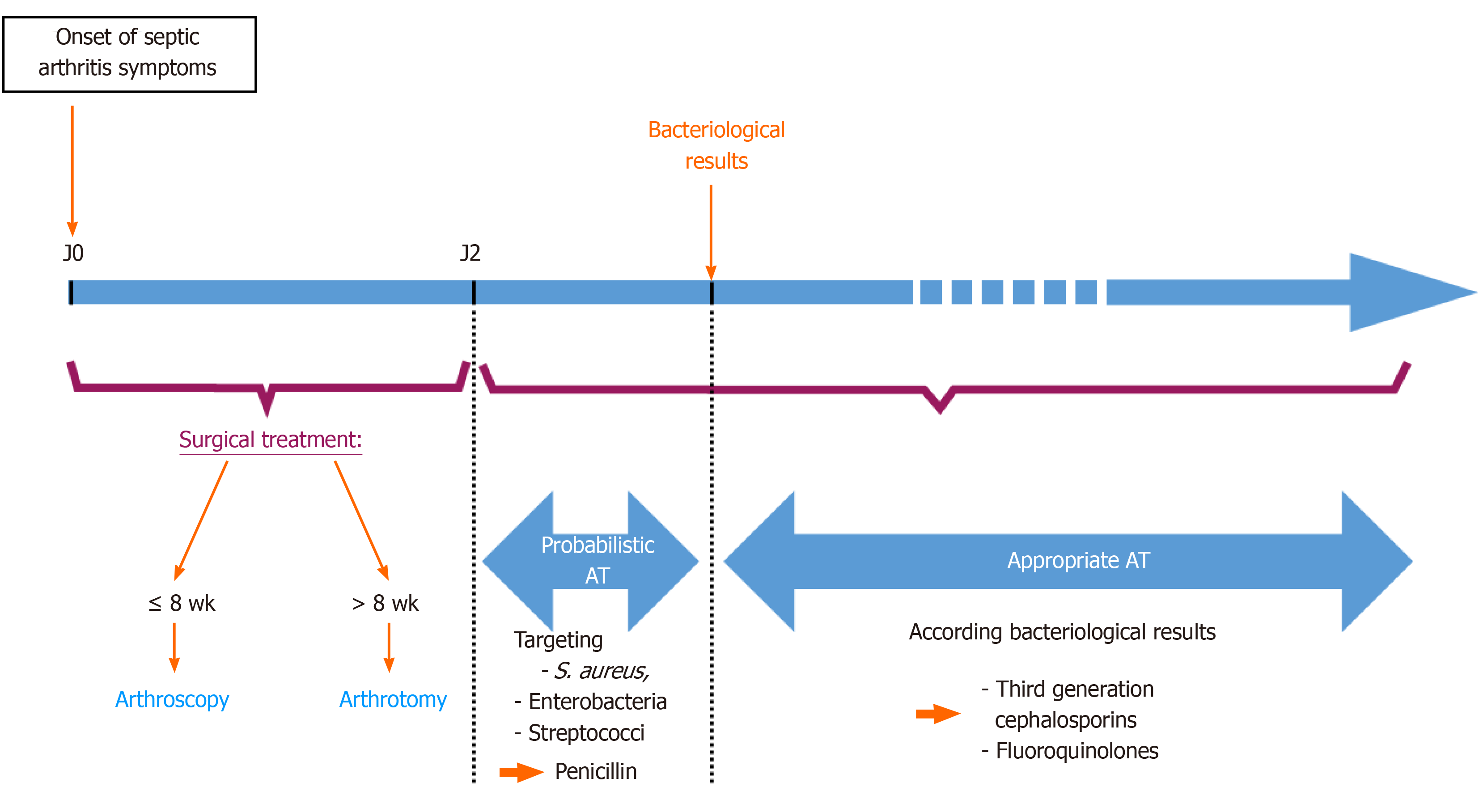 Blind joint fluid aspiration is not described in the optimal management of infection after ACLR and antibiotic therapy initiated before the first arthroscopic lavage in our patient could have negated the results of bacteriological samples, resulting in a delay in optimal management and therefore decreasing the chances of saving the graft[16]. For acute (less than 2 wk postoperatively) and subacute (between 2 and 8 wk) infections, arthroscopic debridement and lavage can be proposed, while for chronic infections (after 8 wk postoperatively) an open lavage via an arthrotomy has been recommended. Additional lavage may be necessary if the initial treatment fails. The modalities of management, in this case, are ambiguous: some would perform a second lavage arthroscopically and others would prefer an arthrotomy[16,18].

The presence of an abscess in the surgical wound, backed by a CRP increase despite the surgical and antibiotic treatment, justified a second lavage in order to reduce the bacterial inoculum. In this patient case, the subacute infection justified the use of an arthroscopic approach instead of an arthrotomy. An open arthrotomy could also have been performed if arthroscopic treatment had failed. In this case, iterative arthroscopic management has been successful to control the infection. Antibiotic therapy is adapted after analysis of antibiotic sensitivity, and continued until the clinical-biological evolution is satisfactory, an antibiotic treatment of at least 6 wk is recommended[19].

The initial antibiotic therapy used in this patient was appropriate because it is effective for the most frequent pathogens (i.e., staphylococci). It was adapted after antibiotic sensitivities. Salmonella is sensitive to third generation cephalosporins and fluoroquinolones, which were administered to our patient once the bacteriological results were obtained[7,11].

Graft failures are rare in early management of infection[16]. For this patient, the causes may have been as follows: The 24 h delay in treatment due to the aspiration, the absence of graft debridement, the pathogen (since no cases of Salmonella septic arthritis after ACLR are described), but likely primarily due to the two successive surgical procedures that could have compromised the integration of the graft.

Infection after ACLR is uncommon, with staphylococci found in more than 90% of cases. This case highlights the importance of early diagnosis and management: arthroscopic lavage for acute infections or arthrotomy for late infections and appropriate antibiotic therapy. Like any septic joint, early aggressive surgical treatment is required, also aiming to reduce the risk of arthritis-related joint cartilage destruction and damage to the graft.