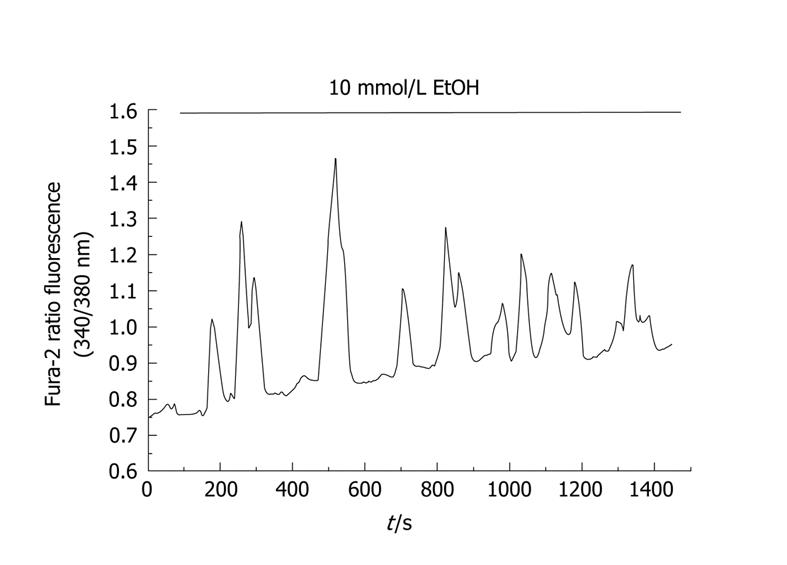 Figure 1 Time-course of changes in [Ca2+]i in response to ethanol. Cells were loaded with the fluorescent probe fura-2. Changes in fluorescence emitted by the fluorophore reflect changes in [Ca2+]i. In this setup, pancreatic acinar cells were stimulated with 10 mmol/L ethanol, which induced an oscillatory pattern in [Ca2+]i. The horizontal bar indicates the time during which ethanol was applied to the cells. (nm, nanometers). 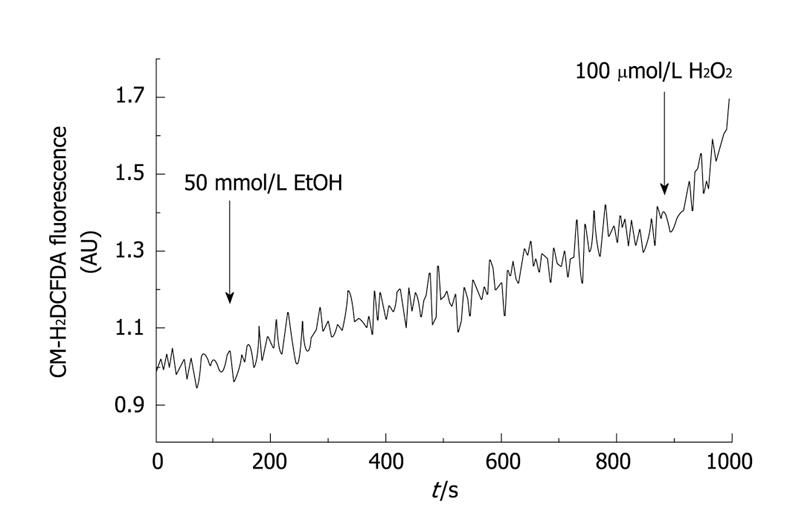 Figure 2 Time-course of ethanol-evoked reactive oxygen species (ROS) production in mouse pancreatic acinar cells. Pancreatic acinar cells were loaded with CM-H2DCFDA, a stable non-fluorescent molecule that yields a polar diol that is well retained within the cells. The diol can then be oxidized by ROS to a fluorescent form; therefore this dye has been proved to be an excellent probe for determination of ROS production. In this setup, stimulation of cells with 50 mmol/L ethanol (EtOH) led to a significant increase in ROS generation. At the end of the experiment H2O2 (100 μmol/L) was added, as a positive control for oxidation. a.u., absolute units of fluorescence.

Figure 3 Putative mechanisms of action of ethanol on pancreatic acinar cells physiology. EtOH may, either itself or through its metabolites, sensitize the exocrine pancreas to physiological agonists. The point of action of ethanol may be at the R on the cell surface or intracellular. A stimulated Ca2+ release from the ER and a reduction in Ca2+ extrusion from the cytosol by the SERCA and/or the PMCA, will lead to accumulation of Ca2+ within the cytosol. This may lead to an overproduction of ROS which, in turn, will augment cytosolic Ca2+ accumulation, apart from other cellular effects. Cytosolic Ca2+ overload, together with ROS generation, may inhibit exocytosis of digestive enzymes (Z) that will accumulate inside the cell. Intracellular trapped digestive enzymes may be activated, and may initiate the autodigestion of the gland, establishing an inflammatory process. On the other hand, ethanol and/or its metabolites can activate intracellular routes for inflammation and/or cell proliferation, contributing to the impairment of cell function and to an uncontrolled cell growth. ER: Endoplasmic reticulum; SERCA: Sarco-endoplasmic reticulum Ca2+-ATPase; PMCA: Plasma membrane Ca2+-ATPase; IP3R: Inositol 1,4,5-trisphosphate.