Article-Type of This Article
Diagnosis Advances

Diagnosis of extremity soft-tissue tumors can be challenging. Characteristics of tumor margins can help precisely identify locally aggressive or non-aggressive behavior for surgical planning, but cannot differentiate benign from malignant lesions. Most malignant tumors can have inhomogeneous signals on T2-weighted images. Although a uniform signal on T2-weighted images can be a reliable indication of a benign lesion, a well-defined mass with homogeneous internal signal intensity does not definitively identify a benign lesion. Some common and distinctive soft-tissue lesions can have specific clinical and imaging features allowing a diagnosis without biopsy. These are known as determinate lesions. This illustrative report presents a diagnostic guide for extremity soft-tissue tumors based on tissue signal and morphological characteristics on magnetic resonance images. It is important for clinicians to be familiar with the imaging characteristics of common determinate lesions.

Core tip: The aim of this illustrative report is to provide a diagnostic guide for soft-tissue tumors of the extremities based on tissue signal and morphological characteristics on magnetic resonance images.

MAGNETIC RESONANCE IMAGING OF SOFT-TISSUE TUMORS OF THE EXTREMITIES: A PRACTICAL APPROACH

The functions of magnetic resonance (MR) imaging in evaluation of soft-tissue tumors of the extremities include detection, characterization, local staging, and detection of recurrence and complications after therapy.

MR imaging and computed tomography (CT) scanning can be equally accurate for detecting the size and extent of a tumor. MR imaging is more accurate than CT for evaluating individual muscle involvement and therefore can be the staging procedure of choice in patients with soft-tissue sarcoma of the extremities.

MR imaging is superior to CT in detecting recurrent soft-tissue sarcomas. A nodule or mass with a mass effect on surrounding tissue is highly indicative of recurrent tumors. However, both the tumor and organizing scar (or granulation tissue) can show marked gadolinium enhancement.

Figure 1 Lipoma of the tendon sheath. A: T1-weighted MR image of the right wrist shows a lobulated high-signal-intensity mass (arrows) located between the palmar muscles; B: Fat-saturated proton-density weighted MR image shows homogeneous low signal intensity of the tumor mass (arrows), suggestive of a fat component; C: There is no enhancement of the tumor mass (arrows) after gadolinium administration on fat-saturated T1-weighted image. MR: Magnetic resonance. 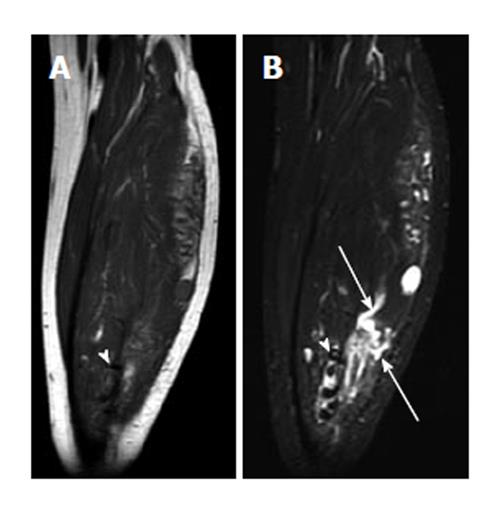 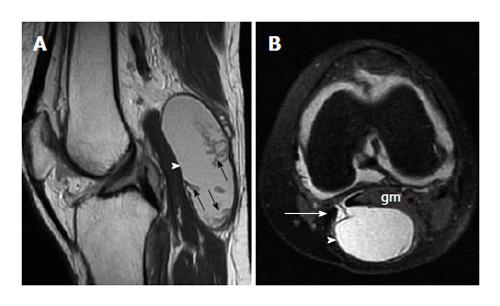 Figure 4 Baker cysts. A: Sagittal proton-density B: Axial gradient-echo images. The left knee shows a well-defined cystic lesion (arrowhead) connected to the knee joint by way of a narrow neck between the semimembranosus tendon (arrow) and the medial head of the gastrocnemius muscle (gm). Note that the Baker cyst contains debris (small arrows in A). 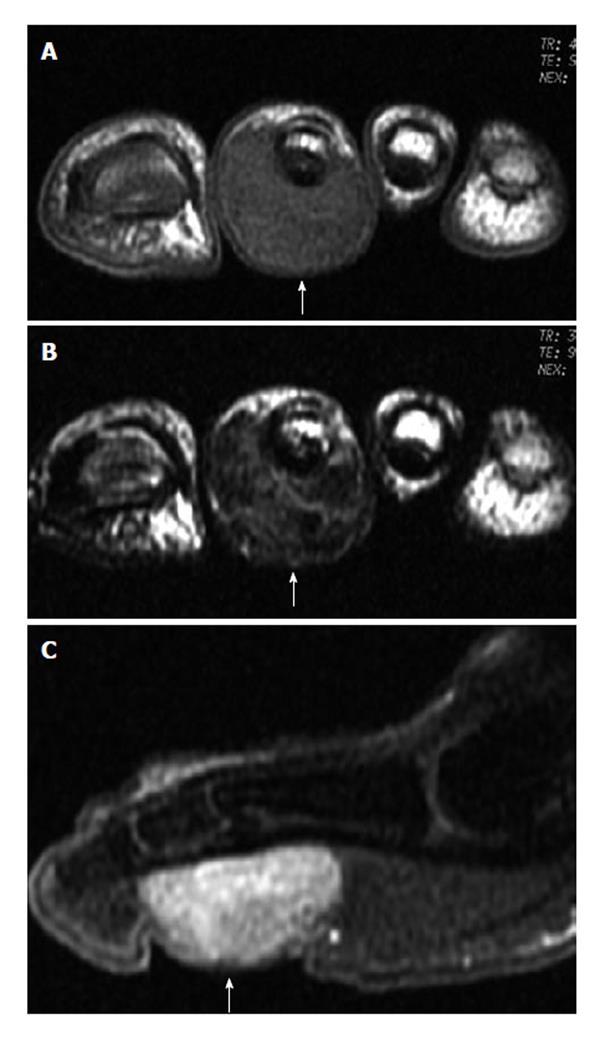 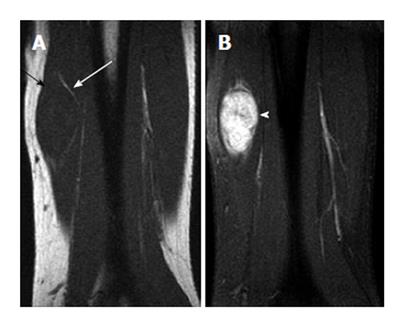 Figure 6 Neurofibroma of the left ulnar nerve (split-fat sign) in a 58-year-old man. A: Coronal T1-weighted image of the left forearm shows a spindle-shaped mass with isointensity relative to adjacent muscle. Note the presence of the split-fat sign (arrows). Because the neurovascular bundle is normally surrounded by fat, masses arising at this site maintain a rim of fat about them as they slowly enlarge; B: Coronal T1-weighted fat-saturated gadolinium-enhanced image shows heterogeneous enhancement of the mass (arrowhead). Recognition of the spindle shape of the tumor and contiguity of the tumor and adjacent nerve may suggest the diagnosis[6]. 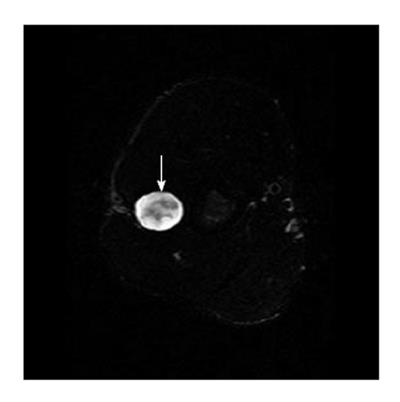 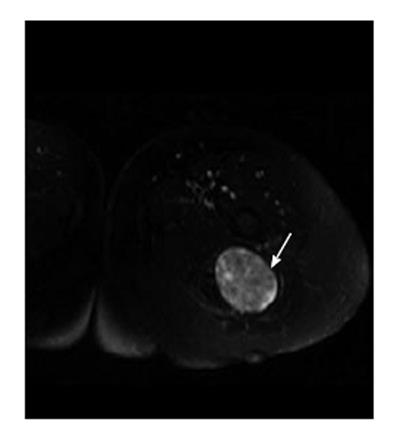 Figure 8 Neurofibroma of the left sciatic nerve (fascicular sign) in a 55-year-old woman. A hyperintense mass (arrow) with multiple small hypointense fascicle-like structures in the mass, representing the “fascicular sign”[6]. 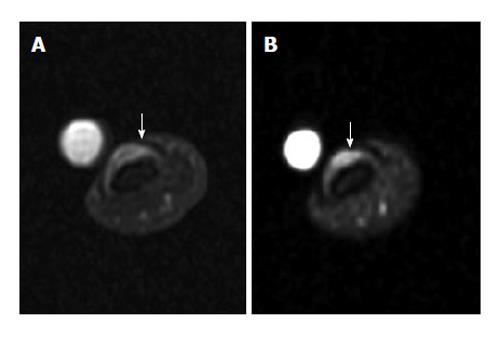 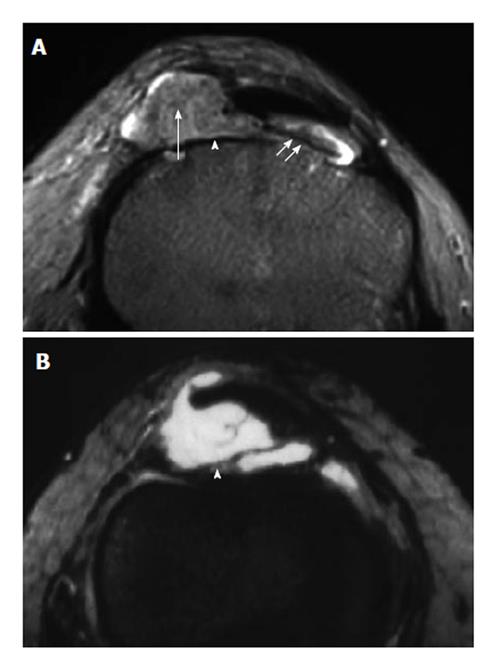 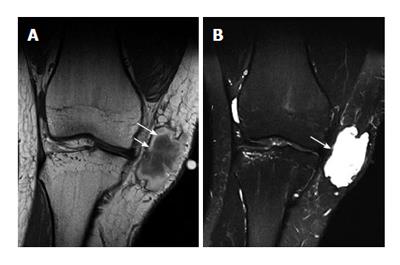 Figure 11 Early subacute hematoma. A: Coronal T1-weighted; B: T2-weighted MR image of the knee. On T1-weighted image, there is a hyperintensity of extracellular methemoglobin at the periphery (long arrow) of the hematoma (which is seen 2-7 d after injury). Note a very thin low-signal-intensity rim at the outermost layer of the hematoma, indicating hemosiderin (short arrow). B: Coronal T2-weighted MR image shows overall hyperintensity of the hematoma (arrow), exception made for a very thin low-signal-intensity peripheral rim caused by hemosiderin. 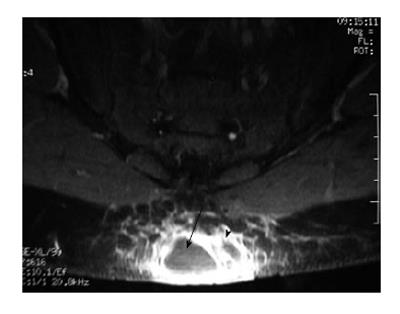 Figure 12 Abscess. Axial gadolinium-enhanced T1-weighted image with fat saturation shows a mass lesion within the subcutaneous fat of the buttock, with a pronounced rim of enhancement (arrowhead), corresponding to large amounts of granulation tissue. The unenhanced central area is a fluid-debris cavity (arrow).
MRI indeterminate lesions

An indeterminate lesion is one that must be biopsied to ensure an accurate diagnosis[2]. Examples of lesions are malignant fibrous histiocytoma (Figure 13), fibroma, fibrosarcoma, leiomyoma, leiomyosarcoma, angiosarcoma (hemangiosarcoma), rhabdomyoma, rhabdomyosarcoma, synovial sarcoma, synovioma, lymphangiosarcoma, malignant hemangiopericytoma, alveolar soft parts sarcoma, epithelioid sarcoma, and angiosarcoma. Diagnosis of a lesion suspicious for a malignant tumor should never be relied on imaging alone. All suspicious tumors should be biopsied (Figures 14 and 15). 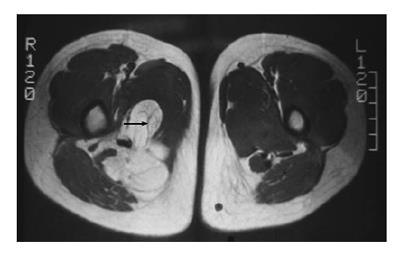 Figure 14 Low-grade liposarcoma. Axial T1-weighted MR image of bilateral thighs shows a lobulated high-signal-intensity mass with uneven or focal thickening septa (arrow) within the tumor on the right thigh, which can be a finding for low-grade liposarcoma. MR: Magnetic resonance. 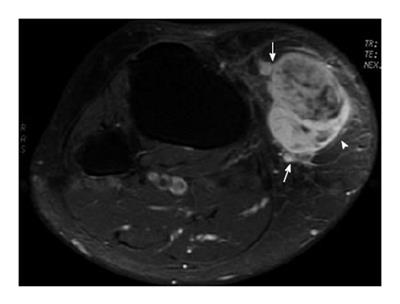 Figure 15 Malignant peripheral nerve sheath tumor involving the subcutis of the right knee in a 65-year-old woman. Tumor mass (arrowhead) is located in the subcutaneous area of the right knee. The mass has an ill-defined margin (arrows) with a fascicular appearance centrally.
Characteristics of tumor margins

A well-demarcated lesion or a tumor mass with a capsule can favor a benign diagnosis, whereas a less well-demarcated lesion or tumor mass with an infiltrative margin is most likely malignant. Margin characteristics can help precisely identify locally aggressive or non-aggressive behavior for surgical planning, but cannot differentiate benign from malignant lesions[3]. Clinical data always play an important role in evaluating the aggressiveness of tumors.

The aim of this illustrative report is to provide a diagnostic guide for soft-tissue tumors of the extremities based on tissue signal and morphological characteristics on MR images. Examples of common determinate lesions are illustrated, except that one indeterminate lesion (malignant fibrous histiocytoma) is shown as an example for comparison.

In summary, MR imaging can be helpful in evaluating soft-tissue tumors of the extremities, but it can also be misleading. The combination of signal and morphological characteristics on MR images allows radiologists to categorize many lesions as benign or malignant, although a significant proportion of the images are not specific. It is important for clinicians to be familiar with the imaging characteristics of common determinate lesions. Biopsy is needed to define the histological nature of an indeterminate soft-tissue neoplasm.