Computed tomography (CT) and magnetic resonance imaging (MRI) are excellent modalities which have the ability to detect, depict and stage the nerve invasion associated with pancreatic carcinoma. The aim of this article is to review the CT and MR patterns of pancreatic carcinoma invading the extrapancreatic neural plexus and thus provide useful information which could help the choice of treatment methods. Pancreatic carcinoma is a common malignant neoplasm with a high mortality rate. There are many factors influencing the prognosis and treatment options for those patients suffering from pancreatic carcinoma, such as lymphatic metastasis, adjacent organs or tissue invasion, etc. Among these factors, extrapancreatic neural plexus invasion is recognized as an important factor when considering the management of the patients.

Pancreatic carcinoma is a common malignant neoplasm with a high mortality rate. There are many factors influencing the prognosis and the selection of treatment methods for those patients suffering pancreatic carcinoma, such as lymphatic metastasis, adjacent organs or tissue invasion, etc. Among these factors, extrapancreatic neural plexus invasion is recognized as an important factor when considering the management of the patients.

We all know that neurotropic growth is one of the important biologic features of pancreatic carcinoma; cancer cells possibly spread and metastasize through the perineural space leading to recurrence after surgery[1-7]. Extrapancreatic neural plexus invasion can be found in the early stage and in small sizes of tumor, even in those less than 2 cm in size[8,9]. Neural invasion has been found at operation in 91% of patients with pancreatic carcinoma[10]. Nakao et al[11] found that 90% of intrapancreatic nerve and 69% of extrapancreatic neural plexus were involved in 204 patients with pancreatic carcinoma through 10 years of follow-up; the survival rate in the latter group was markedly lower than that in the former after surgical resection.

The mechanisms of extrapancreatic nerve invasion have been described as follows: (1) destroying perineurium directly; (2) getting into the perineural space through perineurial vessels and reticular fibers; and (3) destroying nerve terminal synapse adventitia. In general, carcinomas in the head, uncinate process and tail of pancreas mainly invade the right coelial plexus, superior mesentery artery (SMA) nerve plexus and splenic plexus, respectively[5-7,12].

It has been reported that the application of coronal and sagittal multiplanar reformatted images or curved planar reformations enhances the performance of multidetector row computed tomography (MDCT), especially for the evaluation of local extension of pancreatic adenocarcinoma[13-15]. It is likely that diagnosis of extrapancreatic neural plexus invasion by pancreatic carcinoma would be more precise and exact using MDCT[16]. Furthermore, high resolution computed tomography (CT) and dynamic enhanced scanning are of great help to reveal the nerve invasion.

Currently, the techniques of enhanced CT, T1-weighted imaging (SPGR), T2-weighted imaging (FRFSE) and MR dynamic enhanced scanning are proving to be the most useful methods[8,18]. The characteristics of imaging are listed as follows.

Plain and contrast-enhanced CT is often used to aid the diagnosis of pancreatic carcinoma and help evaluate the extension including the nerve and vascular invasion. Contrast-enhanced CT can show the tumor and the mass (nerve invasion) clearly during rapid bolus injection of large amounts of iodinated urographic contrast. Also, the results have shown correlation between CT and pathological findings[8,13,19].

The introduction of multidetector-row scanners has facilitated the acquisition of images during multiple phases of intravenous contrast administration. Utilization of the arterial dominant phase (first phase), using a scan delay of 40 s has resulted in superior pancreatic parenchymal enhancement. This has led to superior tumor-to-parenchymal enhancement differences, facilitating superior tumor detection and diagnosis, when compared to portal venous (second phase, 70 s delay) or delayed phases (third phase, 150 s delay) of imaging. All the images obtained are used to reconstruct and to observe pancreatic carcinoma and the extrapancreatic invasion[15,16].

Current MR techniques using phased-array torso coils, thin slices, and dynamic gadolinium-enhanced breath-hold gradient-echo (GRE) sequences are optimal for imaging of pancreatic carcinoma, and each has its own advantages in the detection of smaller tumors and the extension of carcinoma. For a comprehensive assessment of pancreatic carcinoma and extrapancreatic invasion, it is necessary and important to use different series, including T1-weighted imaging (e.g., fast spin-echo imaging with multiple breath-hold acquisitions or single-breath-hold gradient echo imaging); T2-weighted imaging (e.g. FRFSE or SSFSE imaging) and fat saturation three-dimensional enhanced SPGR dynamic MR images. The most helpful sequences are the T1-weighted fat-suppressed and fat saturation three-dimensional gadolinium-enhanced GRE sequences. On the T1-weighted fat-suppressed images, the pancreatic parenchyma usually shows high signal intensity due to its abundant proteinaceous element while the tumor is of low signal intensity. On the gadolinium-enhanced GRE images, pancreatic carcinomas enhance less than the surrounding parenchyma due the lack of blood supply; when the signal of adipose tissue is very low, the enhanced pancreatic parenchyma and vessels render the ideal setting for observation. Furthermore, MRI has high sensitivity in the detection of small tumors, vascular metastasis and nerve invasion[20-23].

Dynamic imaging is performed with four breath-hold sequences- before the injection (corresponding to unenhanced imaging), immediately after the injection (arterial dominant phase of enhancement), 30 s afterward (early venous phase of enhancement), and 1 min afterward (late venous phase of enhancement). An additional delayed phase was acquired using a two-dimensional single-section SPGR technique in a study performed by our group[22]. All the MRI pictures were taken from our hospital patients, and all the examinations were conducted on 1.5-T MR imagers (Signa, GE Healthcare).

CT has been used to study the extrapancreatic neural plexus invasion in common bile duct carcinoma[8,24,25] and pancreatic carcinoma[26]. Miura[24] reported that a mass-like lesion located between the medial portion of the uncinate process and the SMA or celiac artery could diagnose extrapancreatic neural plexus invasion around the SMA and celiac artery with an accuracy of 63% on CT using 5 mm slice table incremental CE-CT, when performed on eight patients with pancreatic head carcinoma. 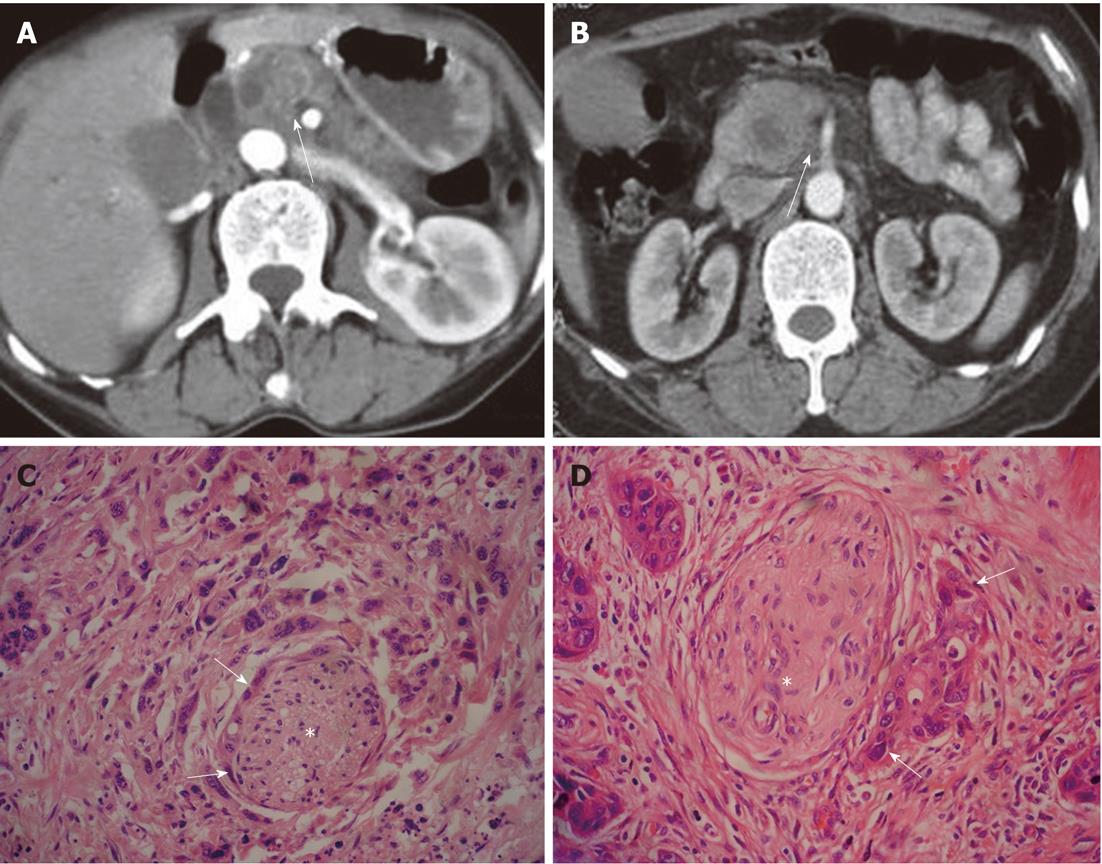 Figure 4 Characteristics of extrapancreatic neural invasion by pancreatic carcinoma on computed tomography image. A: Imaging shows the streaky and strand-like structure (arrows) around the tail of pancreas; B: The histological picture confirmed the invasion (asterisk) by the carcinoma (arrows) (HE, 200 ×).

Tian et al[8] studied 41 patients with carcinoma of pancreatic head, establishing two levels of criteria (A and B) for the assessment of neural plexus invasion on thin-section helical CT imaging. Criterion A was with respect to changes in the area around the SMA and inferior pancreaticoduodenal artery (IPDA), because the IPDA was mostly visualized on thin-section helical CT and was included in the PLX-II: A0, no change in fat attenuation; A1, increase in fat attenuation, such as a streaky and strand-like structure (Figures 1, 3 and 4); A2, mass formation (Figures 2, 5 and 6)[16,28,29]. Criterion B was defined based on the status of the jejunal trunk (JT) because JTs are exclusively visualized on thin-section helical CT and run across the PLX-II: V-, normal JT; V+, stenosis or obstruction of the JT[30].

Tian et al[8] reported that neural plexus was invaded in 85% of pancreatic carcinoma, and that there was no correlation between carcinoma size and the incidence of carcinoma invasion to the PLX-II. The sensitivity, specificity and accuracy were, respectively, 100%, 91% and 95% according to criterion A; and 18%, 100% and 62% according to criterion B, for evaluating the PLX-II invasion. They concluded that criterion A had higher sensitivity and accuracy, while criterion B had higher specificity.

The potential invasion to the extrapancreatic neural region near to pancreatic carcinoma on MR imaging was seen to include regions posterior and media to the pancreatic head, posterior to body of the pancreas, and also included the involvement of major vessels adjacent to the tumor, including the SMV and/or portal vein, SMA, celiac axis artery, common and/or proper hepatic artery, and splenic artery[22].

On MR imaging, the degree of the extrapancreatic neural invasion might be classified into three grades[8,17]: NV0, no change in fat signal intensity; NV1, streaky and strand-like signal intensity structure in fat tissue (Figure 7); NV2, irregular masses (diameter larger than 10 mm) adjacent to the lesions (Figure 8). 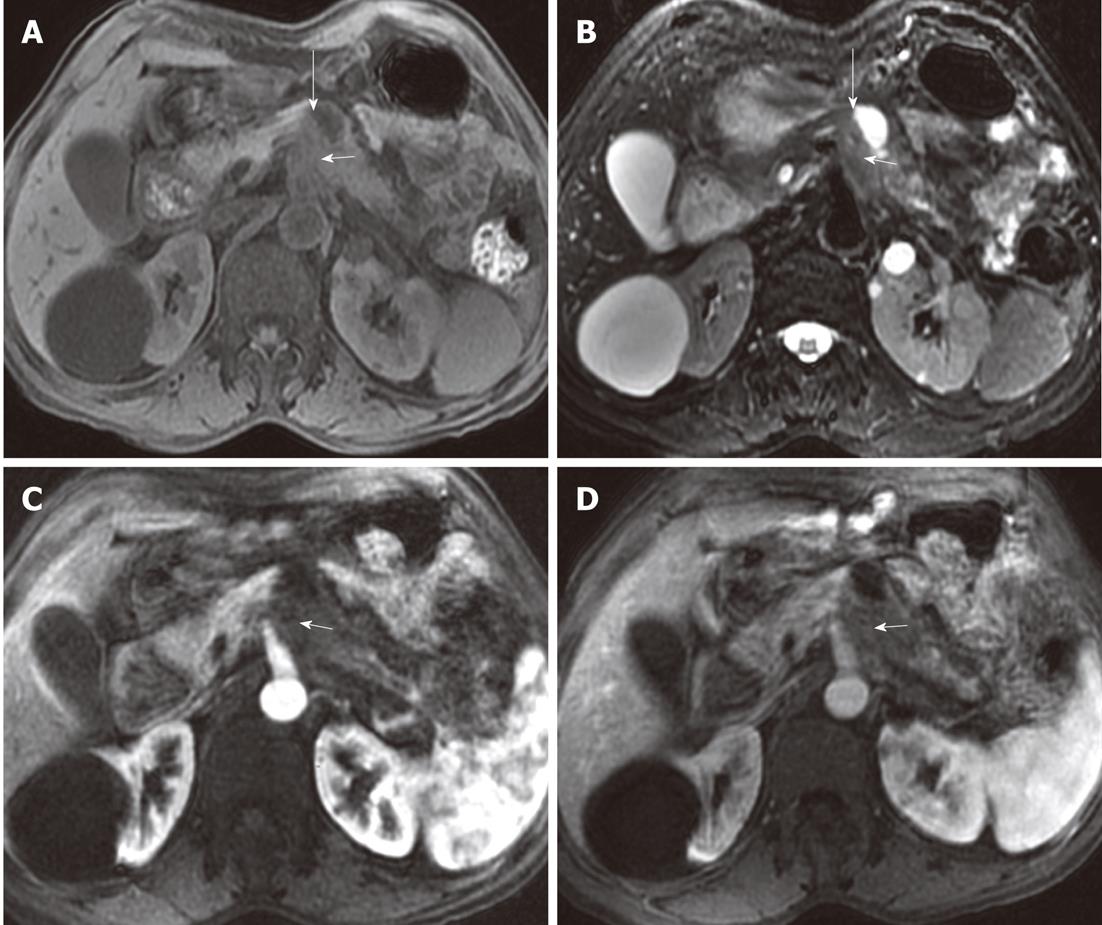 Figure 7 Example of patterns of extrapancreatic neural invasion by pancreatic carcinoma and the characteristics as visualized by magnetic resonance imaging. Fifty-seven-year-old female with pancreatic body carcinoma: magnetic resonance images. The tumor (short arrows) was located at the body of the pancreas which showed hypointensity on T1-weighted imaging (A), arterial phase (C) and venous phase (D), while it showed hyperintensity on T2-weighted imaging (B); there was streak-like signal intensity structure (long arrows) between pancreatic body and abdominal aorta. 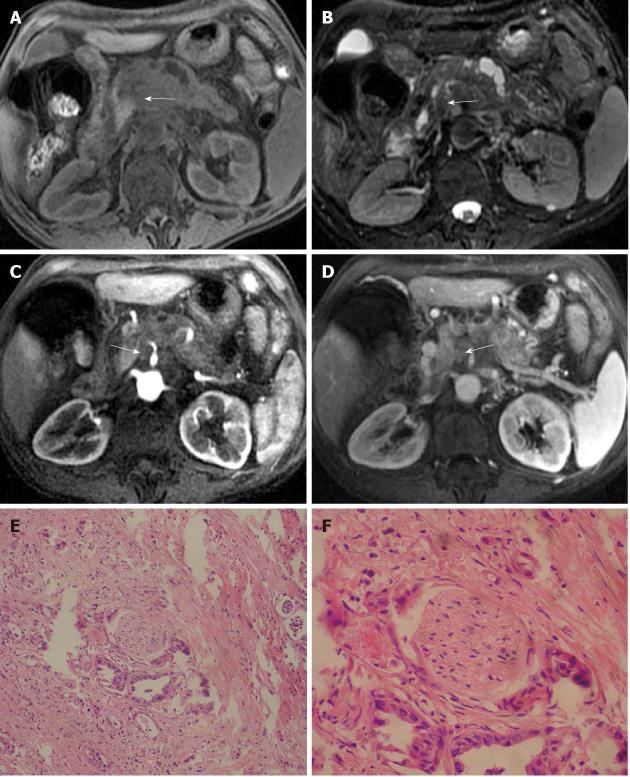 Figure 8 Characteristics of tumor and the extrapancreatic neural invasion by pancreatic carcinoma on magnetic resonance images in an 80-year-old female. The tumor was located at the region between head and body of the pancreas and invaded medial to pancreas forming a mass (arrows). A: 3D gradient-echo (GRE) T1-weighted precontrast image; B: Fat-saturated fast recovery fast spin-echo T2-weighted image; C and D: 3D GRE T1-weighted Gd-enhanced arterial and venous phases. Histopathology confirmed extrapancreatic neural invasion by pancreatic carcinoma (arrows); E: HE, 40 ×; F: HE, 200 ×.

We have previously studied 20 patients with pancreatic carcinoma by MR imaging, and found the signs of extrapancreatic neural plexus invasion in 16 of the 20 patients (80%); 50% of patients showed streaky and strand-like signal intensity structures in fatty tissue, and 30% showed masses near the tumor. The signal intensity of the nerve invasion was hypointense on T1-weighted imaging and isointense on T2-weighted imaging in 88% of the patients, hypointense on arterial phase and isointense on delayed phase in 94% of the patients. Furthermore, vascular invasion was often demonstrated in the setting of nerve invasion (Figure 9), and the degree of vascular invasion was correlated with that of nerve invasion (r = 0.58, P < 0.005)[22]. 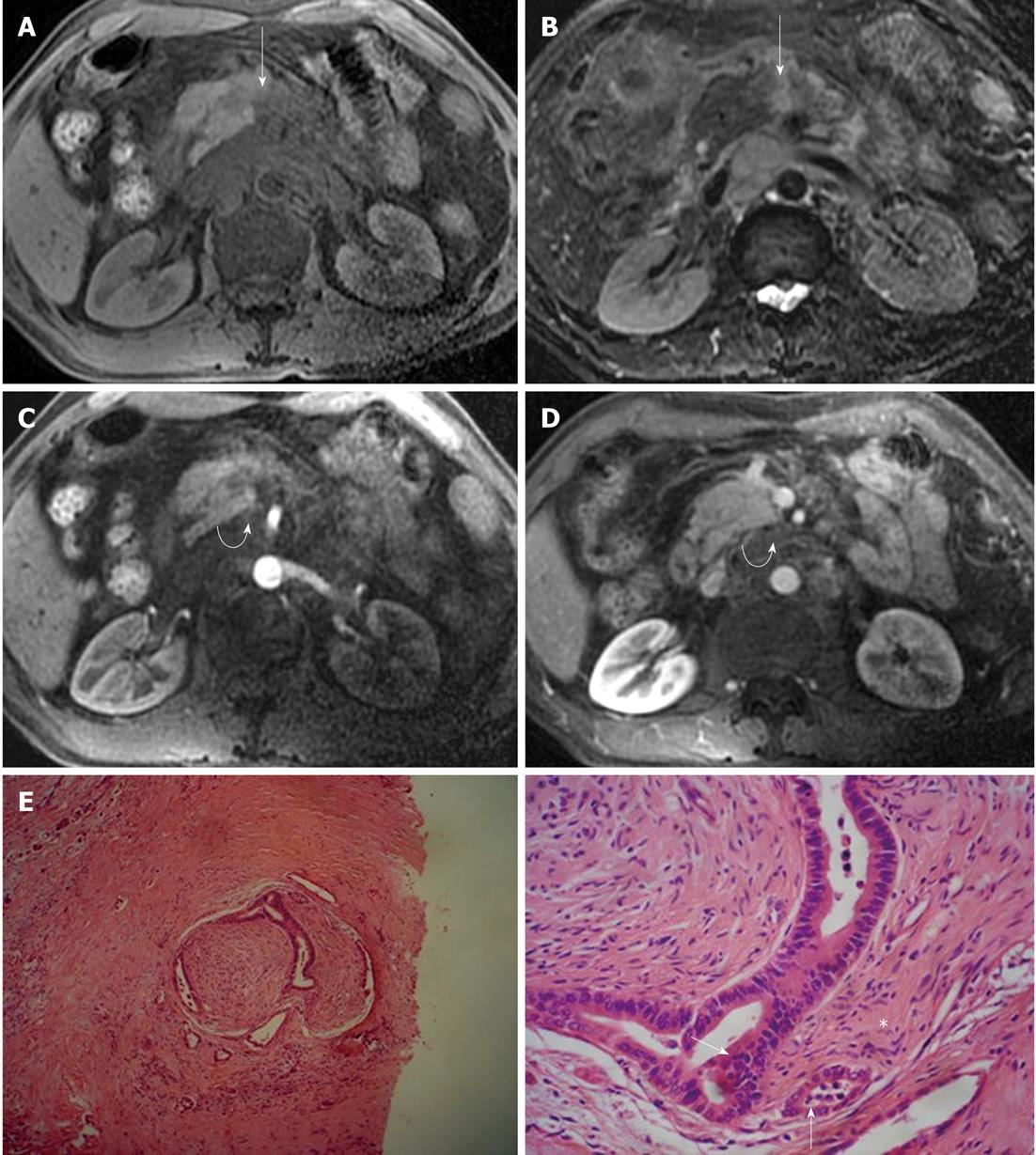