Congenital airway anomalies can be asymptomatic or may cause severe respiratory distress requiring immediate treatment. These anomalies can present early in life, or may be just incidental findings. It is important to recognize these entities to realize their clinical significance and to avoid false diagnosis. In this article, the various congenital airway anomalies and their imaging features by multidetector computed tomography (MDCT) are reviewed in order of occurrence during the embryological timeline. This pictorial essay reviews the various distinct congenital airway lesions and their MDCT manifestations. It also provides insight into the embryological basis of the congenital airway lesions encountered.

Imaging modalities for pediatric tracheo-bronchial lesions have vastly improved over time. Frontal and lateral neck and chest X-rays were the radiological investigations used in the past which provided limited diagnostic yield[1]. With the advent of multidetector computed tomography (MDCT) scanners and continued refinement in the 3-D reconstruction software algorithms, newer options for non-invasive imaging of these lesions have become available. These high resolution images demonstrate exquisite details of the airways down to the segmental bronchi, can depict the adjacent mediastinal structures, and result in an improvement in diagnostic confidence. In addition, decreased scan time, and therefore decreased need for prolonged sedation in the pediatric population, are advantageous in scanning children, where motion artifact is an issue.

EMBRYOLOGY OF THE AIRWAY

The lower respiratory system originates as a diverticulum from the ventral wall of the foregut during the 4th week of life and continues to develop until 2 years of life. The respiratory epithelium originates from the endodermal lining of the respiratory diverticulum. The cartilaginous and muscular components of the trachea and lungs are derived from the surrounding splanchnic mesoderm. As the diverticulum elongates in the caudal direction, it divides into the trachea and esophagus by a trachea-esophageal septum. The ventral portion forms the trachea and lung buds, while the dorsal portion forms the esophagus. At 28-30 d, the lung buds form the primary bronchi, from which develop the segmental bronchi.

Tracheal agenesis and atresia are rare congenital anomalies which cause respiratory distress in the newborn immediately after delivery. In the most common variety (type II), there is complete tracheal atresia with normal bronchi and carina. Rarely, there is normal distal trachea and bronchi with a tracheo-esophageal fistula and atretic proximal trachea (type I) or no trachea at all, with the bronchi arising directly from the esophagus (type III)[2]. Tracheal agenesis is sometimes associated with syndromic conditions, such as VATER (vertebrae, anus, trachea, esophagus, and renal) (Figure 1 and Table 1).

Figure 1 Tracheal agenesis type-III. A, B: Axial images in the lung window show the presence of dilated esophagus and tube in situ. There is no separate lumen for trachea; C: Caudally, right (long arrow) and left main bronchi (short arrow) arise independently from the thoracic esophagus.
Duplication cyst

Foregut duplication cysts are not often classifiable as either esophageal or bronchogenic. Bronchogenic cysts are by far the most common mediastinal cysts. Approximately 80% of cysts are located in the paratracheal or subcarinal location. These foregut duplication cysts close to the airway can cause compression and narrowing of the lumen, thereby causing hyperinflation of the lung[3]. On CT, these cysts appear as thin walled unilocular fluid attenuation masses situated close to the airway (Figure 2).

Figure 2 Foregut duplication cyst. Axial images in the mediastinal (A) and lung (B) window and coronal multiplanar reformatted images (C) showing a fluid-attenuating lesion (long arrows) in the mediastinum compressing the left main bronchus (short arrow) with hyperinflation of left lower lobe. Hydropneumothorax in the left side was due to post-surgical change.
Tracheal web

A tracheal web consists of a thin layer of membrane encircling the tracheal lumen. The narrowing of the lumen caused by the membrane is variable. Webs and stenosis result from a failure of complete resorption of the epithelium during the seventh and eighth weeks of intrauterine development. Congenital webs occur in the larynx, usually at the glottis level, and affect the vocal cords[4] (Figure 3).

Figure 3 Congenital subglottic web. A, B: Sagittal multiplanar reformatted images (A) and coronal minimal intensity projection images (B) show the short segment and circumferential narrowing of the subglottic region; C: Virtual bronchoscopy image shows the narrowing to be annular and is located below the vocal cords (arrow).
Congenital subglottic and tracheal stenosis

This condition accounts for 15% of all laryngeal anomalies and is the most common laryngeal anomaly requiring tracheotomy in infants. Incomplete recanalization of the laryngotracheal tube during the third month of gestation leads to different degrees of congenital subglottic or tracheal stenosis. Congenital subglottic stenosis can be membranous or rarely cartilaginous, and results from an abnormal shape of the cricoid cartilage (Figure 4). Congenital tracheal stenosis can be generalized as follows: hypoplasia, funnel-shaped stenosis or segmental stenosis[5].

Tracheomalacia is a common cause of stridor and respiratory distress in neonates and infants, second only to laryngomalacia. Tracheomalacia is caused by abnormal collapsibility of the C-cartilages of the trachea. CT imaging features include opposition of the tracheal wall and widening of the C-cartilage with buckling of the posterior wall during the expiratory scan, i.e. the “expiratory frown sign”. Often, imaging may not reveal the narrowing due to the dynamic nature of the narrowing[6] (Figure 5).

Figure 5 Tracheomalacia. Axial image (A) in the lung window and virtual bronchoscopy image (B) shows widening of the tracheal ‘C’- cartilage and decreased antero-posterior dimension of the trachea.
DISORDERS OF TRACHEOESOPHAGEAL SEPTUM
Tracheoesophageal fistula

Tracheoesophageal fistula (TEF) is due to an incomplete separation of pulmonary and esophageal anlage during early embryogenesis. There are five types of esophageal atresia (EA) and TEF, the most common abnormality being EA with a distal TEF (84%). Isolated atresia without a fistula is the next most common finding (8%), followed by H-type TEF without atresia (4%). EA with proximal and distal fistulas (3%) and EA with a proximal fistula (1%) are less common[7] (Figure 6).

Figure 6 Tracheo-esophageal fistula ‘H’- type. Axial image in the mediastinal (A) and lung window (B) shows the presence of tracheo-esophageal fistula (arrows) and consolidation in the right upper lobe. Nasogastric tube is present in the esophageal lumen; C: Coronal multiplanar reformatted images depicts the ‘H’- shaped fistula (arrow) between the trachea and esophagus.
DISORDERS OF TRACHEAL BUD BRANCHING
Tracheal bronchus

Tracheal bronchus refers to an aberrant bronchus arising from the tracheal wall above the carina, usually on the right side, caused by abnormal additional branching in early embryonic life. The incidence of tracheal bronchus is reported to be between 0.1% and 5%. Rarely, it might cause recurrent infection of the involved upper lobe[8] (Figure 7). 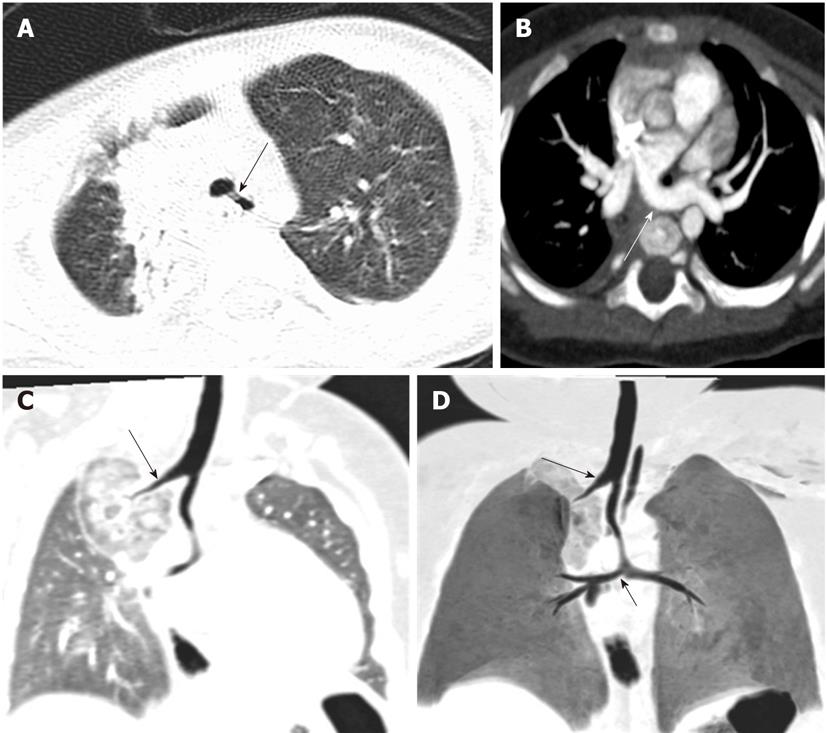 Tracheal trifurcation develops when there is an abnormal division of tracheal segments into three segments instead of the normal two divisions[9] (Figure 8).

Congenital tracheal diverticula are rare developmental lesions which are due to abnormal supernumerary branches arising from the trachea during development. The diverticulum is lined by respiratory mucosa and usually communicates with the tracheal lumen. The most common location of the lesion is the right postero-lateral wall of the trachea at the cervicodorsal junction[10] (Figure 9). 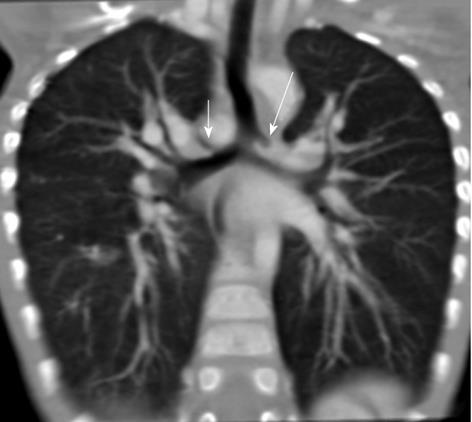 Pulmonary isomerism is an anomaly of the number of lung lobes. In this anomaly, the right lung has 2 lobes, whereas the left has three. This condition may be associated with situs inversus, asplenia, polysplenia, and/or anomalous pulmonary venous drainage (Figure 10).

There are four types of congenital broncho-esophageal communication. Type I is a large congenital diverticulum with an inflammatory fistula with the bronchus. Type II is a fistula between the esophagus and the lobar or segmental bronchus. Type III is an esophageal communication with a pulmonary cyst which then communicates with the bronchus. In type IV, the fistula enters a sequestered segment and divides into smaller tracks[12] (Figure 12).

Figure 12 Pulmonary hypoplasia with broncho-esophageal fistula. Axial image in the lung window (A) shows collapse of the right lower lobe. Aspirated barium (arrow) in the lower lobe was visualized in the axial image in the mediastinal window (B); C: Barium examination, carried out prior to computed tomography through an esophageal tube, depicts the origin of the right lower lobe bronchus from the esophagus.
Bronchial atresia

Bronchial atresia is caused by the obliteration of a segment of bronchus and mucus impaction of the proximal lumen of the bronchus with preservation of distal branches[13]. It is usually an asymptomatic lesion, detected incidentally during imaging for other purposes. The distal lung is aerated from collateral bronchial airways and appears hyperlucent on CT[14]. CT shows a tubular mass-like fluid-filled dilated bronchus, usually an apico-posterior segment of the left upper lobe with peripheral segmental hyperinflation. A dilated tubular-shaped opacity associated with segmental hypoattenuation and decreased vascularity is the characteristic CT finding of bronchial atresia (Figure 13). 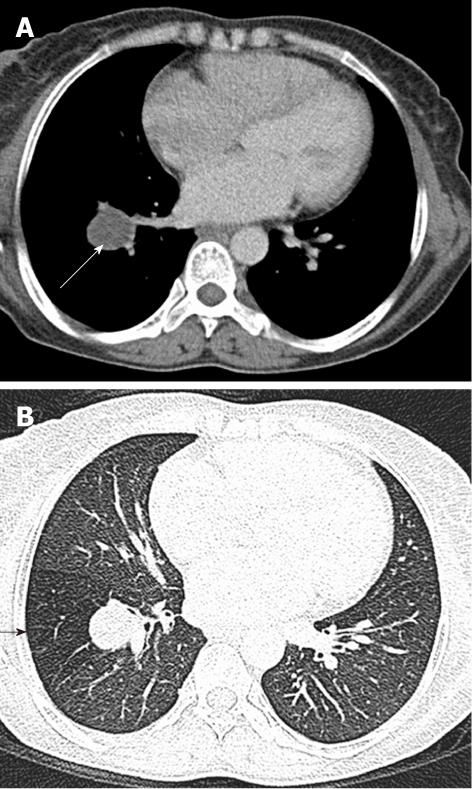 CCAM is a developmental malformation caused by adenomatous proliferation of the bronchiole-like epithelium which is usually not sequestered by the airways. In type 1 CCAM, there are multiple cysts with mass effect on the adjacent lung. Type II and III have increasingly solid components in addition to the cystic component[15] (Figure 14). 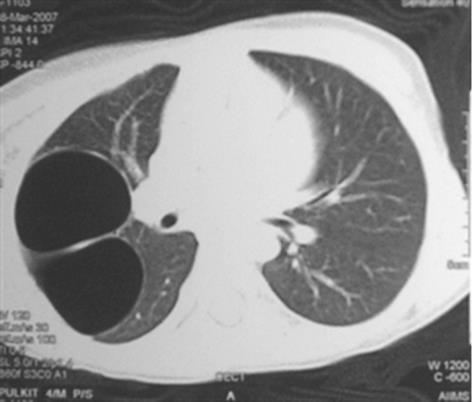 A pulmonary sequestration is a bronchopulmonary segment without a normal bronchial communication and with normal or anomalous vascular supply. The sequestered segment may be intralobar if it is not surrounded by pleura, or extralobar if it is covered by a layer of pleura. Intralobar sequestration usually presents late in childhood due to repeated infections and is generally situated in the lower lobes. Extralobar sequestration usually presents in infancy, is less common than the intralobar variety, and has an upper lobe predilection (Figure 15).

Figure 15 Sequestration of lung segment- Extralobar type. A: Axial image in the lung window shows a homogenous pulmonary lesion in the location of the right lower lobe lateral basal segment; B, C: Coronal multiplanar reformatted images (B) and axial image (C) at the level of portal vein bifurcation in the mediastinal window show anomalous venous drainage (long arrow) into the right branch of the portal vein (short arrow).
EXTRINSIC IMPRESSION

These conditions are not part of the congenital airway lesions and are beyond the scope of this article. However, these conditions may give rise to airway symptoms due to extrinsic compression.

The left main bronchus can be compressed by an anteriorly placed descending aorta or enlarged pulmonary artery[16]. Tracheal compression can be due to a pulmonary arterial sling (Figure 7) or aortic ring[17] (Figure 16).

Figure 16 Compression of left main bronchus between enlarged pulmonary artery and descending aorta. Axial images in the mediastinal window (A and B) show enlarged pulmonary artery in this case of atrial septal defect. Axial image (B) and coronal multiplanar reformatted images in the lung window (C) show narrowing of the mid segment of the left main bronchus (arrows) and the resultant hyperinflation in the left lung.
Peribronchial hamartomas

Pulmonary hamartomas are generally seen sub-pleurally in the peripheral lung parenchyma. Occasionally, they may arise from the mesenchyme of the bronchial wall causing bronchial narrowing or intraluminal growth and can lead to hyperinflation, collapse, pneumonia and hemoptysis[18] ( Figure 17). 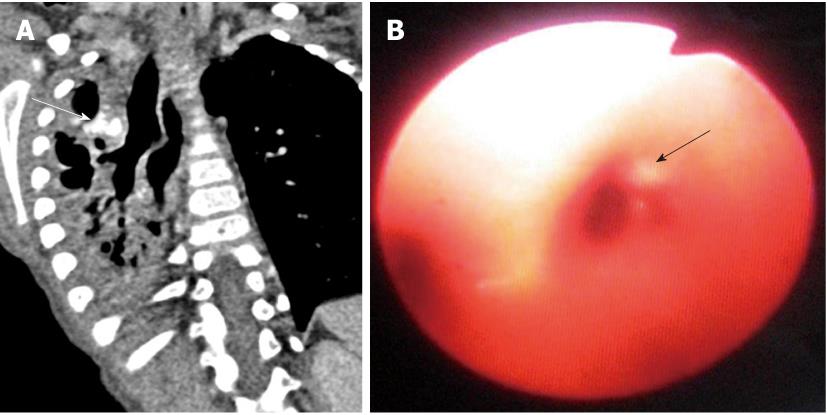 Figure 17 Peribronchial hamartoma. A: Coronal multiplanar reformatted images in the mediastinal window shows eccentric narrowing of the right main bronchus by a lesion with dense calcification (arrow) and resultant distal bronchiectasis and volume loss; B: Fiberoptic image of the carina shows distortion of the antero-lateral wall of the right main bronchus (arrow). Histological analysis revealed the lesion to be a peribronchial hamartoma.
CONCLUSION

Congenital major airway anomalies differ in their stage of development in the embryological sequence, severity of symptoms, time of presentation, and prognosis. MDCT is a valuable adjunct to bronchoscopy, especially in patients with suboptimal bronchoscopy examination. In this review, the utility of MDCT in the diagnosis of congenital airway anomalies is highlighted.