Early diagnosis and management of neck infections and inflammatory processes is a common challenge for emergency and ear, neck and throat physicians, as well as radiologists. Emergency neck infections are diverse in their presentation, ranging from a transient enlargement of a lymph node to a rapidly spreading necrotizing fasciitis. Symptoms and signs, with the clinical history, usually suggest the diagnosis. But complex neck anatomy and sometimes limited physical examination can obscure and delay diagnosis, thus the need for an appropriate imaging exam and correct interpretation. In this pictorial review, we will consider common neck acute inflammatory processes that may be encountered in the emergency room and discuss some of their salient imaging findings.

INFECTIONS OF THE LYMPH NODES

A variety of infectious and non-infectious processes may cause enlargement of cervical lymph nodes, which is referred to as “reactive”. Cervical adenitis denotes an inflammation of the lymph nodes of the neck due to an infectious process (Figure 1A). Suppurative adenitis indicates an infected node that has undergone liquefaction necrosis (Figure 1B). The likelihood of developing cervical adenitis, especially suppurative forms, decreases with age, although the incidence of suppurative adenitis is increasing in older patients[1,2]. 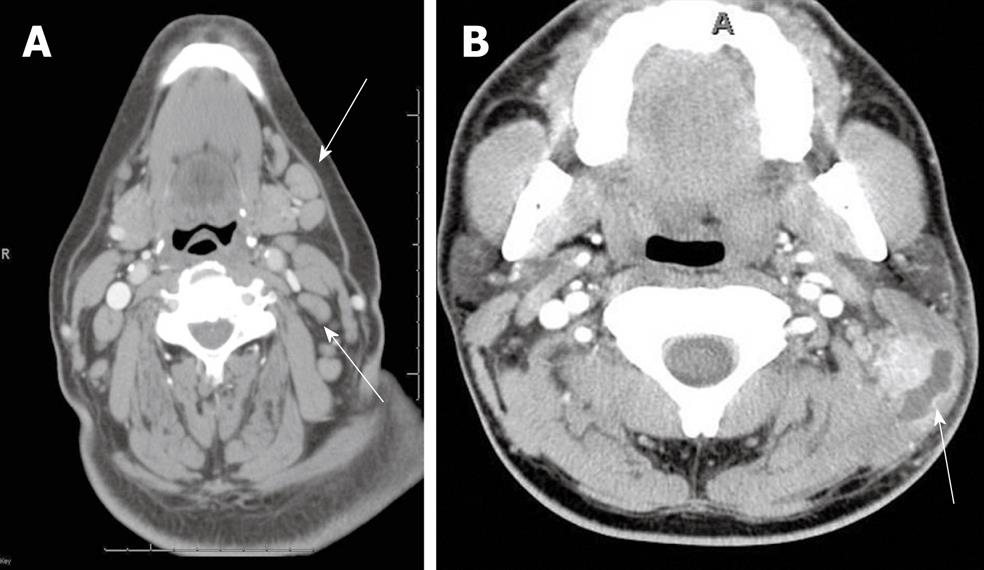 Computed tomography (CT) suggests early involvement of a lymph node by its homogeneous enlargement, loss of the fatty hilum and increased enhancement of the involved lymph node on CT (Figure 1A). Reticulation of the adjacent fat surrounding a suppurative lymph node or the presence of a circumferential rim of soft tissue may be helpful in differentiating an inflammatory etiology as the cause of the abnormal node as opposed to metastases.

Cat-scratch disease (CSD) is caused by the bacteria Bartonella henselae and usually presents within 3-10 d following contact with a cat[7]. It is a very common cause of enlarged cervical lymph nodes in children.

CT usually demonstrates a unilateral clumped group of enlarged lymph nodes clustered in the primary eschelon drainage of the site of contact.

Lymphadenitis is the most common form of head and neck tuberculosis. There is a significant increase in the prevalence of tuberculosis in industrialized countries due to the acquired immune deficiency syndrome epidemic, drug abuse and increased migration[8,9]. Involvement is commonly bilateral and most frequently involves the internal jugular, posterior triangle and supraclavicular nodes. 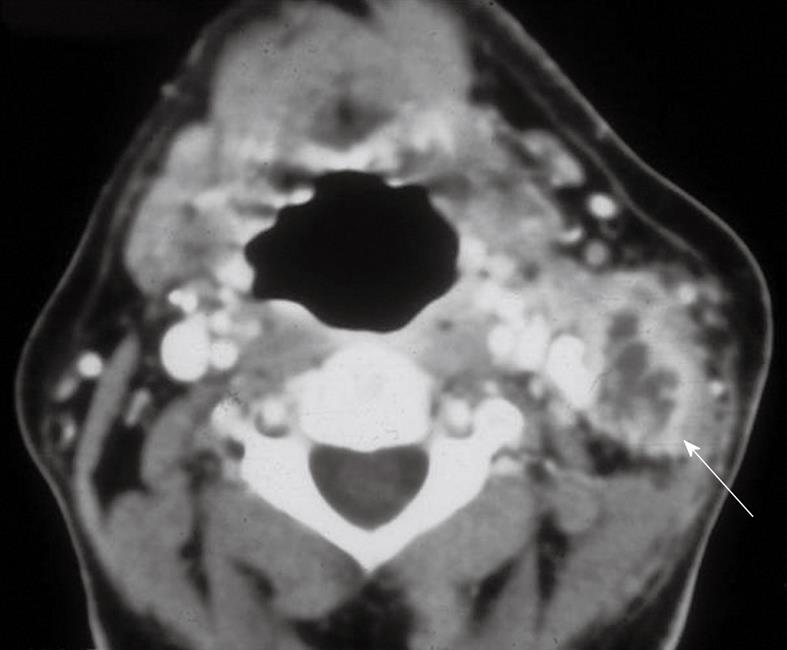 In adults, infection of the retropharyngeal space is usually due to a penetrating injury. Gram positive cocci are the most common pathogen implicated in such cases[10]. In children, however, retropharyngeal space infections are most commonly due to an upper respiratory tract infection. The causal organism is usually Hemophilus influenzae. The affected patient often presents with fever, neck pain, sore throat and neck mass[11]. 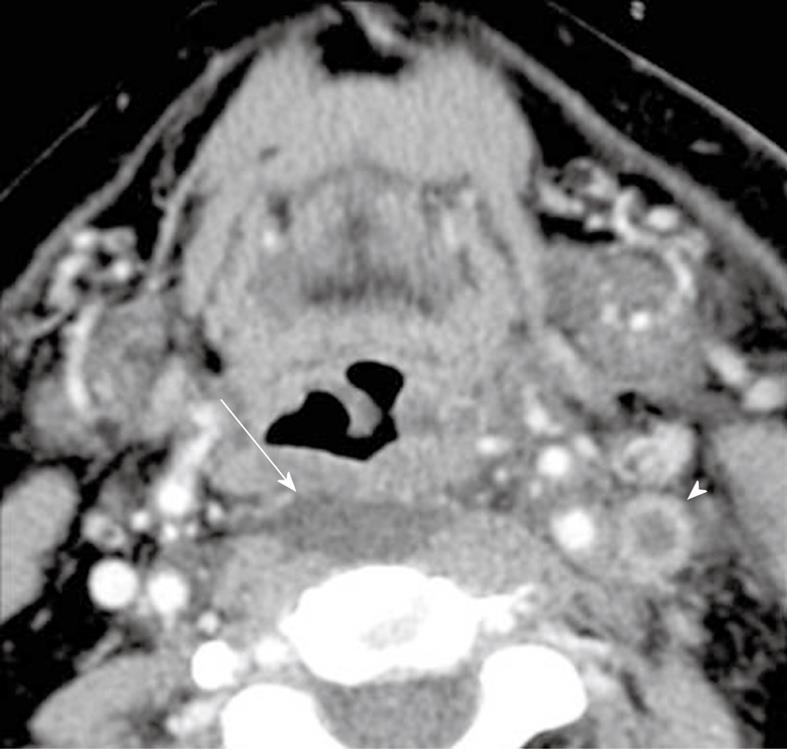 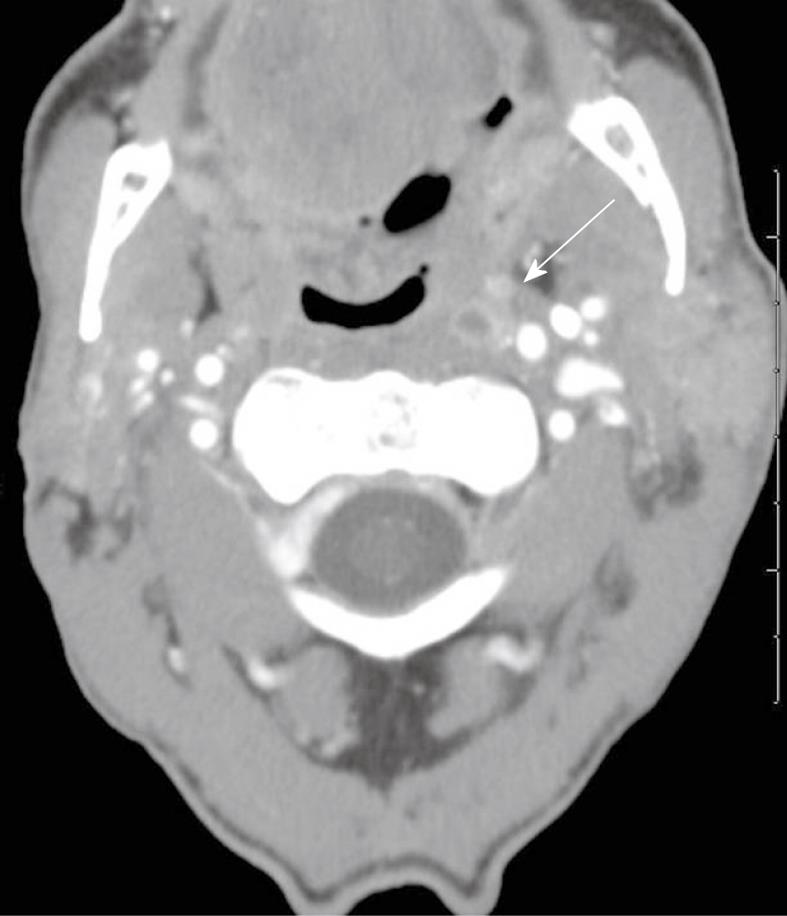 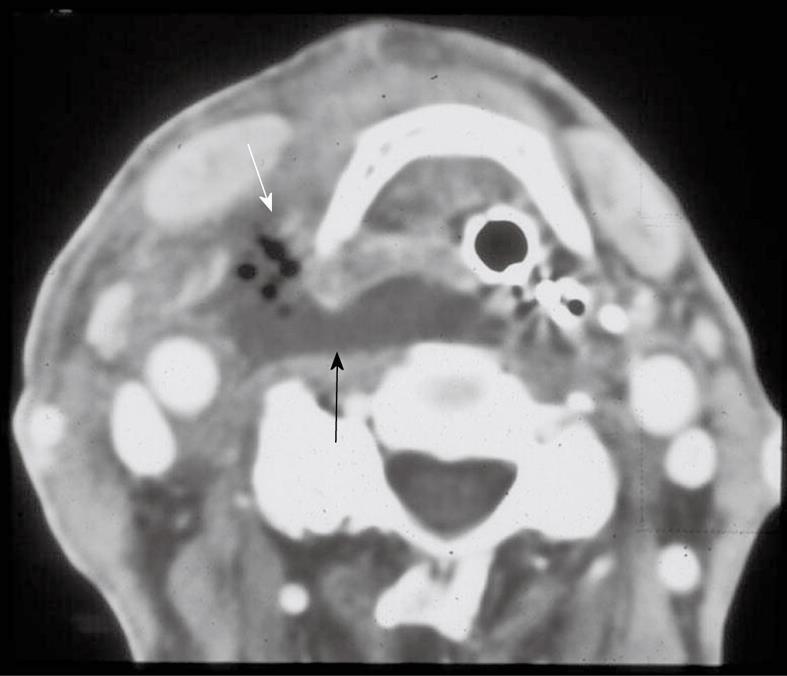 In contrast to acute tonsillitis, which is more common in children, a tonsillar abscess is more common in young adults. The average age is 25 years with more than 65% of patients falling between 20-40 years. Sore throat, dysphagia, fever and trismus are the usual clinical symptoms. Almost all patients have a history of recurrent pharyngitis. Management typically includes incision and drainage with antibiotic coverage[12].

CT shows an enhancing mass in the tonsillar fossa that may or may not show pus formation (Figure 6). Extension into the parapharyngeal space may involve the medial pterygoid muscles and may lead to trismus. The inflammatory process may spread posterolaterally into the carotid sheath with possible jugular vein thromobosis or carotid artery erosion. 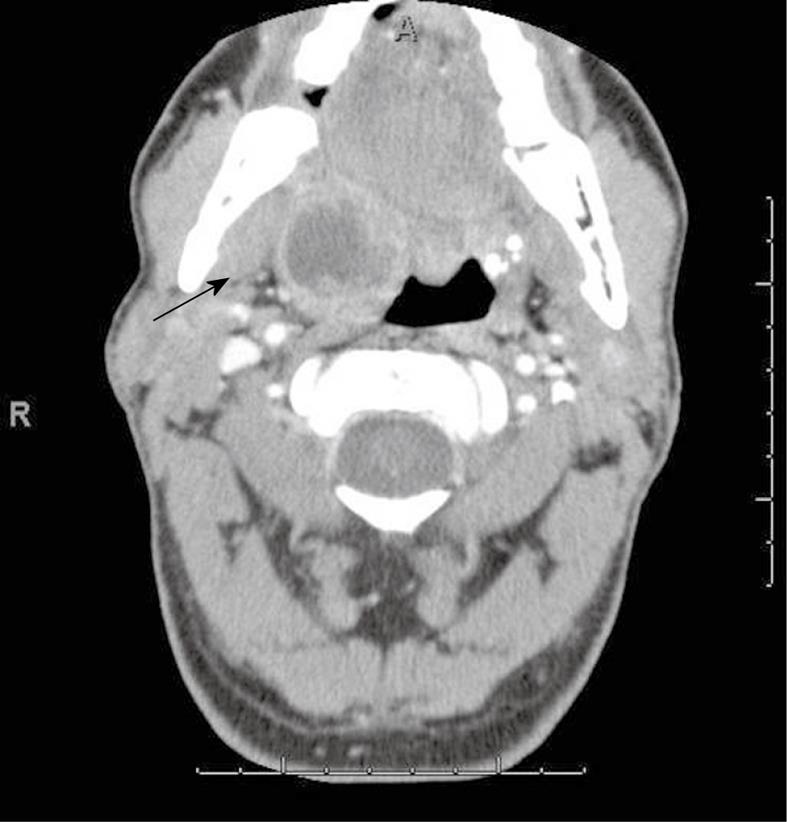 An abscess in the parapharyngeal space may arise from direct extension of infection from the pharynx through the pharyngeal wall, as a consequence of odontogenic infection, local trauma, and occasionally peritonsillar abscess[13]. Diabetes is the most common systemic condition predisposing one to parapharyngeal abscess.

Contrast-enhanced CT scanning is the imaging examination of choice to diagnose parapharyngeal abscess. CT shows a single or multiloculated low-density lesion with an air and/or fluid center (Figure 7) with occasional enhancement of the abscess wall. 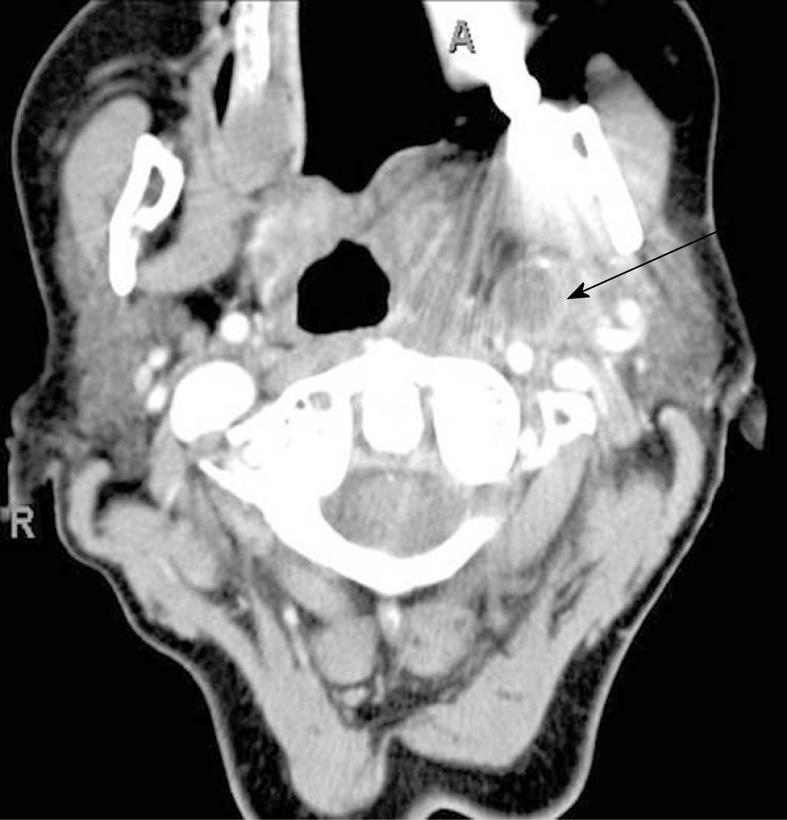 CT imaging will reveal non-specific findings of diffuse reticulation of subcutaneous fat along with thickening and enhancement of the platysma (Figure 8). One may also find multiple abscesses extending along the fascial planes. Presence of gas within the soft tissue in the absence of prior surgery or radiation therapy is pathognomonic for necrotizing fasciitis. 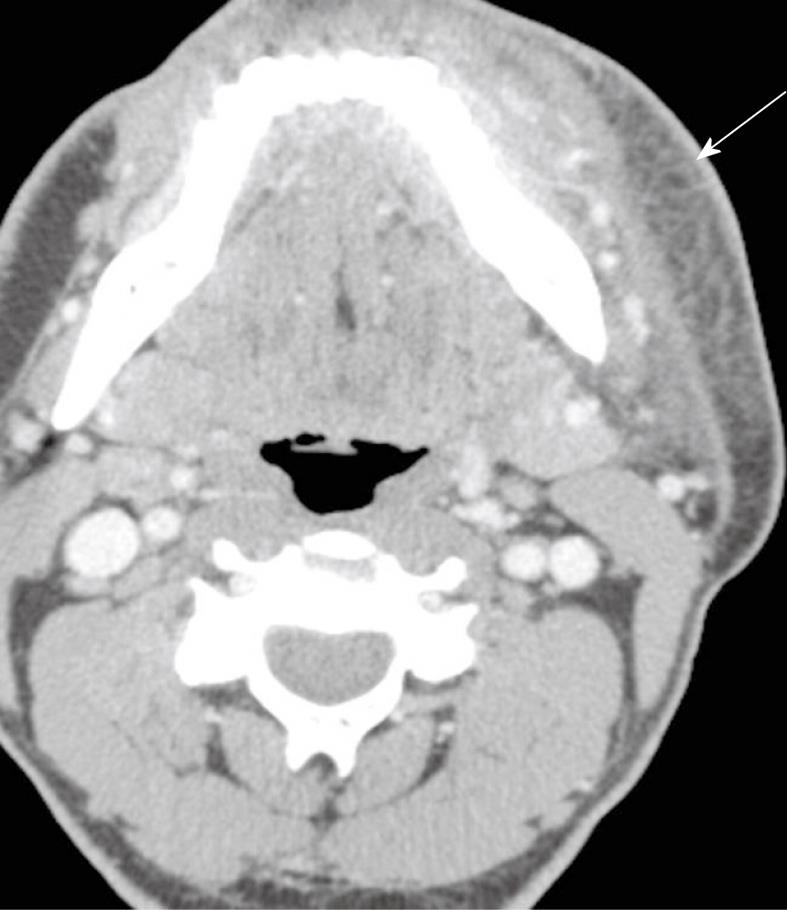 A Bezold abscess is a rare complication of otomastoiditis with necrosis of the mastoid tip and spread of infection from bone to the adjacent soft tissue. Inflammatory collections may course along the plane of the sternocleidomastoid muscle to the lower neck. If left untreated, the abscess may spread as far as the larynx and mediastinum, which results in a poor prognosis. Clinically, patients present with fever, neck pain, restricted neck motion, and otalgia[16,17].

On CT imaging, there is usually unilateral opacification of the middle ear and mastoid cavities, often associated with bone erosion, especially of the mastoid tip (Figure 9A). The abscess involves the adjacent musculature surrounding the mastoid and extends inferiorly (Figure 9B)[18].

Abscesses originating in this space are usually due to sublingual or submandibular duct stenosis or calculus disease. Dental infection or mandibular osteomyelitis, however, may also extend into the sublingual space (SLS). The most commonly encountered organisms in SLS abscess formation are Staphylococcus aureus and Streptococcus viridans.

Clinically, patients with SLS abscess usually present with pain, tenderness and swelling in the anterior floor of the mouth. There may be a history of salivary colic, recent dental disease or dental manipulation.

CT shows an enhancing mass involving the SLS associated with subcutaneous streaking and thickening of the platysmus muscle. The genioglossus-geniohyoid complex is often displaced medially or across the midline (Figure 10). If a submandibular component is present, the infectious process may track into the parapharyngeal space. Infection may also spread to the medial pterygoid or masseter muscles.

Ludwig’s angina denotes cellulitis of the floor of the mouth with infection of the submental, sublingual, and submandibular space. This infection is usually due to streptococcus or staphylococcus species. Patients usually present with pain, tenderness and swelling of the mouth floor. The infection is usually precipitated by an odontogenic infection[19,20]. In neglected cases, Ludwig’s angina may spread inferiorly through fascial planes into the mediastinum, with some patients presenting with chest pain.

Since the tongue can rapidly become posteriorly displaced in this condition, securing a patient’s airway is a priority[21].

Contrast-enhanced CT shows swelling of the floor of the mouth (Figure 11) frequently associated with streaky changes in the adjacent subcutaneous fat and thickening of the overlying platysmus muscle. Enlargement of the submental or submandibular lymph nodes may also be seen, with pus or gas formation present in late cases. 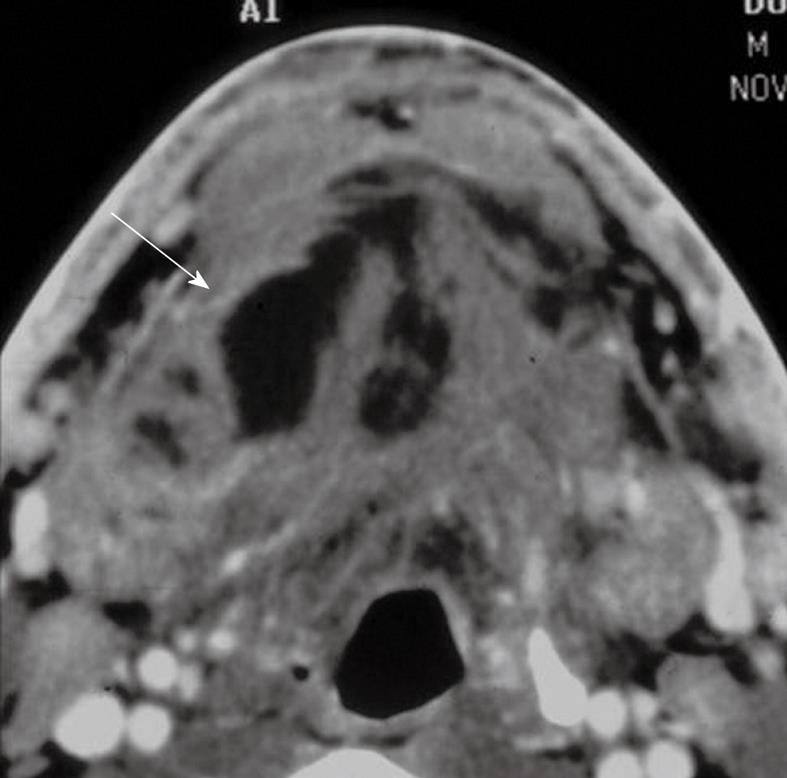 Calcific tendinitis is a benign inflammatory condition caused by deposition of hydroxyapatite in the tendon fibers of the longus colli muscles[22]. Patients present clinically with either sudden onset or subacture pain in the neck and throat worsened by head movement and swallowing[23]. Due to its rare occurrence, it is often mistaken, clinically, for traumatic injury, retropharyngeal abscess, or infectious spondylitis, causing patients to frequently undergo unnecessary tests and treatment. The condition, however, is self-limited and resolves after 1-2 wk upon calcium resorption.

CT imaging may show extensive soft tissue swelling between C1 through C4 with amorphous calcific deposits anterior to C1 and C2[24], with pre-vertebral edema, which are findings that may suggest retropharyngeal space infection (Figure 12). 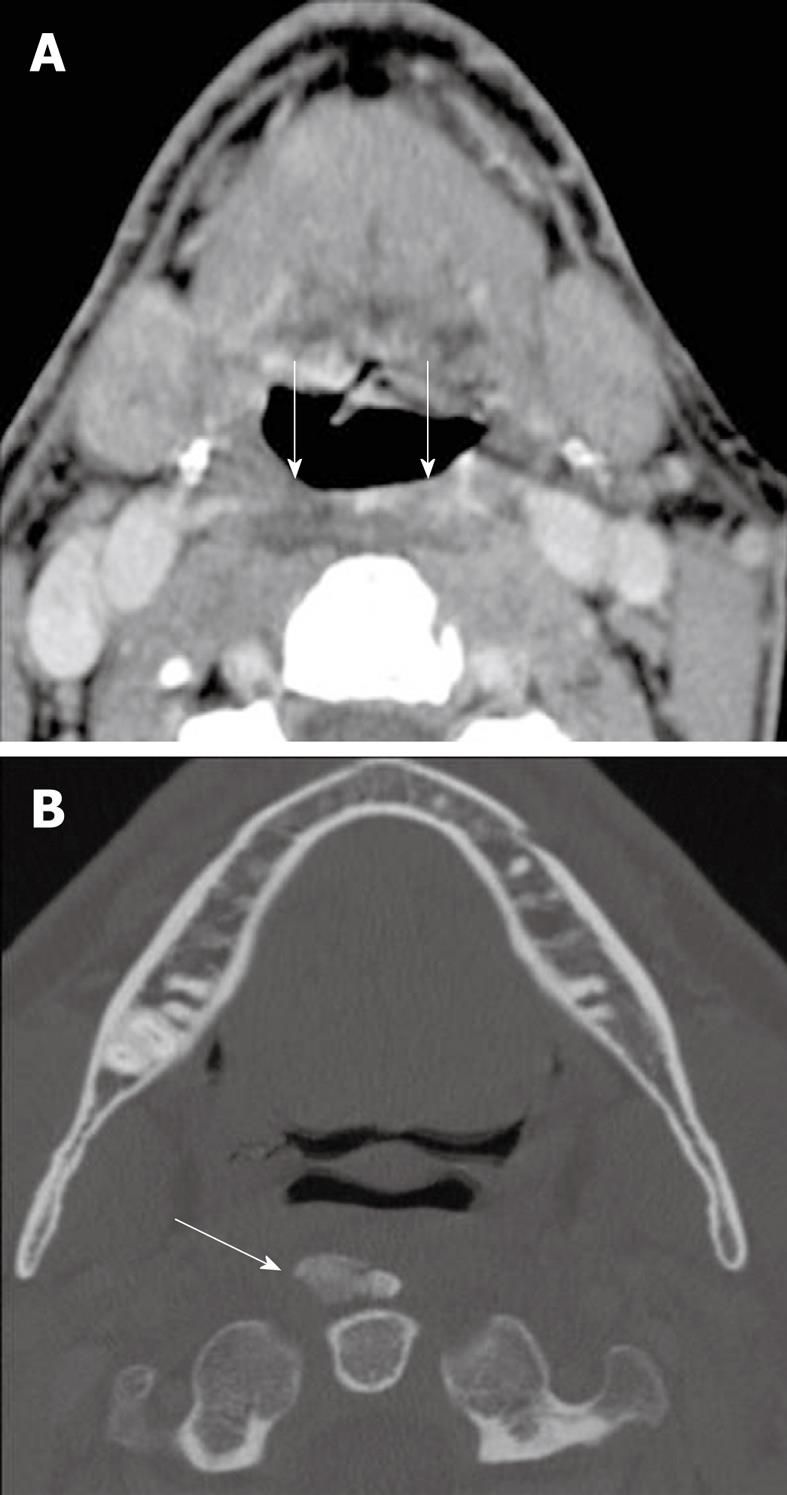 MRI, if performed, will demonstrate a signal void anterior to C1 and C2 representing an amorphous calcification. Additionally, MR may demonstrate marrow edema in adjacent vertebrae.

The majority of swallowed pharyngeal and esophageal foreign bodies take place in the pediatric population[25]. Senile, stuperous and psychiatrically ill adult patients are also prone to swallowing a variety of foreign objects. The ingested foreign bodies usually lodge in areas of normal anatomic narrowing in the cricopharyngeus area, the aortic arch or the distal esophagus. Sharp objects may perforate the pharynx or esophagus and may result in abscess formation in the adjacent spaces, such as the retropharyngeal space. Non-contrast CT confirms the presence of an ingested foreign body. Contrast-enhanced CT will demonstrate the site and level of the resultant inflammation or abscess.

Infectious and inflammatory processes of the neck are frequently encountered situations in the emergency room, with diverse clinical presentation and symptomatology, often with limited physical exam due to complex neck anatomy and limited accessibility to deep neck tissues. CT imaging has become a necessary tool for the diagnosis of neck inflammatory processes, localizing the site and extension of the process and helping in decision making for appropriate surgical or medical intervention. In this pictorial, we review the most frequently encountered situations and we discuss their usual CT findings.