AIM: To express Hsp60 protein of H pylori by a constructed vector and to evaluate its immunogenicity.

METHODS: Hsp60 DNA was amplified by PCR and inserted into the prokaryotie expression vector pET-22b (+), which was transformed into BL21 (DE3) E.coli strain to express recombinant protein. Immunogenicity of expressed Hsp60 protein was evaluated with animal experiments.

RESULTS: DNA sequence analysis showed Hsp60 DNA was the same as GenBank’s research. Hsp60 recombinant protein accounted for 27.2% of the total bacterial protein, and could be recognized by the serum from H pylori infected patients and Balb/c mice immunized with Hsp60 itself.

Helicobacter pylori (H pylori) infection is the major cause of chronic active gastritis and most peptic ulcer diseases[1-11], and is also closely related with gastric cancers such as adenocarcinoma, mucosa-associated lymphoid tissue (MALT) lymphoma and primary gastric non-Hodgkin’s lymphoma[12-18]. This organism has been categorized as a class I carcinoma by the World Health Organization, and direct evidences of its carcinogenesis was recently demonstrated both in an animal model and in retrospective cohort and nested case-control studies in China[19-21]. In addition, seroprevalence studies indicated that H pylori infection was also associated with cardiovascular, respiratory, extra-gastroduodenal digestive, autoimmune diseases[22-24]. Successful eradication of H pylori is thus an important goal. Currently, its treatment involves antibiotic therapy, but this has some associated problems such as low patient compliance and increase of resistant strains[25-27]. An alternative approach is to develop a vaccine, which would not only clear the organism, but also prevent its reinfection[28-31].

Selection of antigenic targets and adjuvants is critical in developing H pylori vaccine. So far this area has achieved only a limited success. With most studies focusing on urease enzyme combined with cholera toxin (CT) or heat-labile toxin of Escherichia coli (LT), this antigen/adjuvant combination has been proved to be effective in many animal models, but some problems still exist such as toxicity of LT or CT and inadequate protection of urease enzyme, so new antigens and adjuvants should be looked for[32]. Some studies have proved that heat shock protein 60 (Hsp60) of mycobacteria was a kind of adjuvants, and could cause immune responses of priority in mouse and mankind models, so some researchers suspected H pylori Hsp60 might be an excellent antigen candidate[33,34]. In this study, recombinant plasmid of H pylori Hsp60 gene was constructed and expressed for the development of H pylori vaccine.

Bacterial strain BL21(DE3) and plasmid pET-22b(+) were provided by the Institute of Biotechnology, Academy of Military Medical Sciences. H pylori SS1 was preserved in this research institute. Restriction enzyme Not I, Nco I and T4 DNA ligase, Vent DNA polymerase, isopropyl-β-D-thiogalactopyranoside (IPTG) were purchased from New England Biolabs Company. Goat anti-mouse and goat anti-human IgG-HRP were purchased from Huamei Bioengineering Company, China and His-Tag precolumn from Invitrogen Company. Specific-pathogen-free, female BALB/c mice were housed according to Health Research Council of China guidelines with free access to food and water. Eight H pylori positive sera (which were positive by urease test, pathological dying and germ culture) and three H pylori negative sera (which were detected negative by the above-mentioned three examinations) were from patients treated in the Endoscope Center of this institute. Other reagents were analytically pure reagents produced in China.

All restriction enzyme digestions, ligations and other common DNA manipulations, unless otherwise stated, were performed by standard procedures[31,35]. The genome of H pylori was prepared from cells collected from colonies on a agar plate. The gene of H pylori Hsp60 was amplified from the genome of H pylori by PCR (Techne PROGENE) using the primers Hsp601 (5’-TGGCCATGGATGGGCCAAGAGGCAGGAAT-3’) as upstream primer and Hsp602 (5’-AGTGCGGCCGCCATCATGCCGCCCATG-3’) as downstream primer as described in the literature[36]. Hsp601 and Hsp602 contained Nco I and Not I sites, respectively. PCR was performed with the hot start method. PCR condition was that after initial denaturing at 95 °C for 30 s, each cycle of amplification consisted of denaturing at 95 °C for 30 s, annealing at 55 °C for 30 s and polymerization at 72 °C for 60 sec and further polymerization for 10 min after 35 PCR cycles. PCR product was harvested from agarose gel, digested with Nco I and Not I, and inserted into Nco I and Not I restriction fragments of the expression vector pET-22b(+) using T4 DNA ligase. The resulting plasmid pET- Hsp60 was transformed into competent E.coli BL21 (DE3) cells using ampicillin resistance for selection. The alkaline lysis method was chosen for large-scale preparations of recombinant plasmid and the plasmids were identified by restriction enzymes. DNA sequence was performed with a DNA automatic sequencer.

The recombinant strains were incubated overnight at 37 °C while shaking in 5 ml LB with 100 μg/mL ampicilline, 50 mL LB were inoculated and the cells grew until the optical density at 600 nm reached 0.4-0.6. Isopropyl-β-D-thiogalactopyranoside (IPTG) was added to a final concentration of 0.1, 0.2, 0.4, 0.6, 0.8, 1.0 mM, respectively.E.coli cells growing in 50 mL LB 3 h or 5 h after induction were harvested by centrifugation at 12000 g for 10 min and the pellet was resuspended in 1 ml 30 mM Tris buffer (pH8.0) containing 1 mmol/L EDTA (pH8.0), 20% sucrose. The suspension was put on ice for 10 min, and then centrifuged for 10 min at 12000 g, and the resulting suspernatant contained proteins from periplasms. The resulting pellet was resuspended in 5 mL 50 mM Tris buffer (pH8.0) containing 2 mM EDTA, 0.1 mg/mL lysozyme and 1% Triton X-100. The suspension was incubated at 30 °C for 20 min and then sonicated on ice until it became clarified. The lysate was centrifuged at 12000 g for 15 min at 4 °C, and then the resulting supernatant containing proteins from cytoplasms was purified with Ni-NTA column. Whole-cell lysates, sonicated supernatant, osmotic shock liquid of recombinant strains expressing H pylori Hsp60 genes and the purified rHsp60 were analyzed by electrophoretical analysis in a 10% polyacrylamide gel.

Six to eight week old mice were immunized four times by hypodermic injection in the back of mice at weekly intervals. Each dose consisted of 20 µg of H pylori rHsp60 protein and 200 µg of adjuvant aluminum hydroxide gel. Age-matched control mice were not immunized. Four weeks after the last immunization, blood samples were taken from the retro-orbital sinus to measure anti Hsp60 systemic immune responses and stored at -20 °C until assay.

According to the literature, the gene encoding Hsp60 protein was amplified by PCR with chromosomal DNA of H pylori Sydeny strain (ss1) as templates. The cloning products were electrophoresed and visualized on 8 g·L-1 agarose gel (Figure 1). It revealed that Hsp60 DNA fragment amplified by PCR contained a gene with approximately 1 548 nucleotides, which was compatible with previous reports[36]. 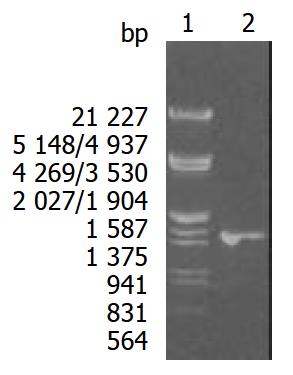 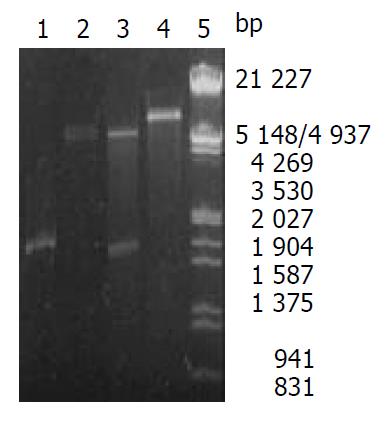 The nucleotide sequence of cloned genes inserted in pET22b(+) was analyzed by automatic sequencing across the cloning junction, using the universal primer T7. The results were as follows the cloned genes contained 1 548 nucleotides with a promoter and a start codon coding a putative protein of 516 amino acid residues with a calculated molecular mass of Hsp60. As compared with previous reports, the homogeneity was 100% between them[36].

Expression and purification of Hsp60 gene in Escherichia coli

Whole-cell lysates, sonicated supernatant, osmotic shock liquid of recombinant strains expressing H pylori Hsp60 genes and the purified rHsp60 were analyzed by electrophoretical analysis in a 10% polyacrylamide gel for detection of fusion proteins (Figure 3). The results showed that the clearly identifiable band was 60 000 Dalton highly expressed fusion proteins, which was similar to that predicted. Gel automatic scan analysis showed that it was 0.6 at D value and the final concentration of IPTG was 0.1 mmol/L and induction for 5 hours, the expression of Hsp60 rose remarkably, which accounted for 27.2% of total bacterial proteins. Among them, soluble substance accounted for 14.7% of supernatant. Hsp60 was further purified with Ni-NTA column; its final purity was 80%. 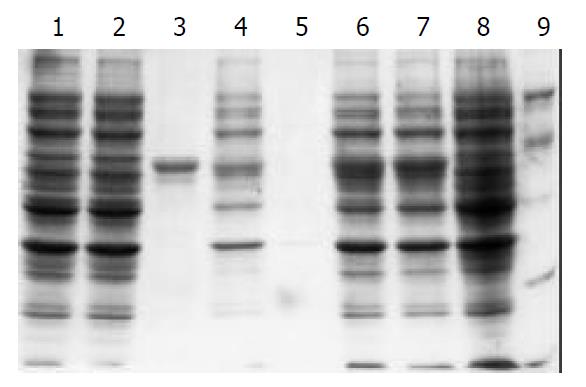 Hsps exists widely in nature and is one of the most conservative proteins of biosphere. For a long time, people have researched low Hsps as a molecular partner took part in physiological activities of cells. However, their results indicate that Hsps from microorganisms are the most important protective antigens when people and animals are infected with microorganisms. The protective immune response to 20 kinds of infectious diseases, such as tuberculosis and lepra was directly aimed at Hsps as far as reported[33,34]. Especially in the model of mice infected with tubercle bacillus, specific anti-Hsp60 only produced immunoreaction with Hsp60 of tubercle bacillus, not with mice Hsp60 themselves[37]. This resolved the autoimmune problems because of high conservation, which was perplexed. Furthermore, in models of mice and monkeys infected with plasmodium, immunoreactions did not depend on adjuvants when polypeptides were combined with Hsp60[38]. It showed that Hsp60 had similar functions of adjuvants. So under the uncertainty of H pylori urease preventing H pylori infection, H pylori Hsp60 as a H pylori vaccine component is not only used to combine urease to constitute multivalence vaccine, but also used as adjuvants to resolve the disadvantages of CT or LT.

In fact, H pylori Hsp60 immune protection function has been confirmed by experiments in vitro and in vivo. Yamaguchi et al[39] reported H pylori Hsp60 monoclonal antibody could significantly inhibite adhesion of H pylori to human gastric epithelial MKN45 cells and gastric cancer cells. Yamaguchi et al[40] also evaluated the protective effect of immunization with amino acids 189 to 203 (VEGMQFDRGYLSPYF) on H pylori Hsp60 molecules. The results suggested that the immune response to the epitope (VEGMQFDRGYLSPYF) was unique and could prevent H pylori infection in animal models. In this study, specific antibody to Hsp60 was detected in sera from the mice immunized with purified recombinant protein Hsp60, but not in sera from the mice in control group. Sera from patients also showed the same results. These results suggest that Hsp60 of H pylori may be a good candidate for a vaccine. However, whether it can be used as an adjuvant and antigen needs to be further researched.