METHODS: HAb18 F(ab’)2 was directly labeled with 188Re using 2-mercaptoethanol (2-ME) as reducing agents. Labeling efficiency and immunoreactivity of 188Re-HAb18 F(ab’)2 were evaluated by Whatman 3MM paper chromatography and live cell assay, respectively. Biodistribution analysis was also conducted in nude mice bearing human hepatoma in which animals were sacrificed at different time points (1, 4, 18, 24 and 24 h) after 188Re-HAb18 F (ab’)2 was injected through tail-vein into hepatoma-bearing nude mice. The blood and radioactivity of organs and mass were measured. The concentrations of 188Re-HAb18 F(ab’)2 were evaluated with apharmacokinetic 3P97 software.

CONCLUTION: The pharmacokinetics of 188Re-HAb18 F (ab’)2 fital-compartment model.188Re-HAb18 F(ab’)2 can be uptaken selectively at the hepatoma site.

188Re is a new radioisotope[1-16]. In the past,131I was used as the main radioisotope for radioimmunotherapy(RAIT).131I has its favour such as simple labeling, appropriate partical energy and path length,but the high energy of γ-ray produced harmness to the whole body, and β-energy(Emax,0.6MeV) was low[17-22]. So scientists have searched for more effective radioisotope. Rhenium-188 is of particular interest to this study as the 188Re may be obtained from the 188W/188Re generator, and 188Re decays by β- emission with energies (Emax = 2.12MeV) similar to 90Y and γphotons (Eγ = 155keV; aboundance = 15%) that are useful for dosimetry calculations and radioimmunoimaging, with a half-time of 17h. Furthermore, 188Re has chemical properties similar to 99Tc m, thus it can be conjugated to antibodies modeling on 99Tc m labeling methods using direct or indirect method[23-29]. Direct methods require attaching the reduced form of Re to the endogenous thiols of antibodies, whereas indirect methods require the reduced Re to be complexed by a bifunctional chelator that is conjugated to the antibody[30-32]. There has been considerable interest in the direct labeling of mAb, which would result in the formation of an instant kit formulation for imaging or therapy.

188Re can be provided at reasonable costs for routine preparation of radiopharmaceuticals for cancer treatment. 188Re is an important therapeutic radioisotope which is obtained on demand as carrier-free sodium perrhentate by saline elution of the tungsten-188/rhenium-188 generator system.Because of its prominent physical characters, 188 Re will become a new therapeutic isotope.188Re is a radioisotope currently under evaluation for a variety of therapeutic application, including that for metastatic bone pain and therapy in oncology.

The HAb18 antibody is a murine IgG1 anti-hepatoma monoclonal antibody under investigation in our laboratory. It does not cross react with normal liver cells, and only rarely with other malignant tissues. Due to the smaller size, easier penetration into tumor tissues, rapid clearance from circulation, and less human anti-mouse antibody (HAMA) reaction, F(ab’)2 fragments showed that tumor localization is faster and better than the intact antibody. Previous studies of 99Tcm labeled with HAb18 F(ab’)2 indicated that the conjugate is effective to detect hepatoma in the nude mice model[33]. The results encourage us to continue the radioimmunotherapy for hepatoma using 188Re labeled with HAb18 F(ab’)2. we have studied the pharmacokinetics of 188Re-HAb18 F(ab’)2 in hepatoma-bearing nude mice in order to prove if 188Re-HAb18 F(ab’)2 was located specially in hepatoma, to establish the pharmacokinetical model and get the parameters of pharmacokinetics.

Five-week Balb/c nude mice( derived from Experimental Animals Center of our university) were implated with 1 × 107 (0.2 mL) human hepatocellular carcinoma (HCC) cells in the right thigh. When the diameter of the tumors reached 1cm, the tumor bearing mice would be investigated further.

HAb18 F(ab’)2 fragment was generated by pepsin digestion and phenyl-sepharose HP column purification with a relative molecular mass of 110000. The solution containing the antibody fragment was concentrated by lypholization and reconstituted with distilled water.

The antibody concentrated at 5 g·L-1 was reduced by reaction with a molar excess of 2-ME at 4 °C for 20-30 min. The reduced antibody was isolated from reductant through a PD-10 column (Pharmacia) equilibrated with 0.05 mol·L-1 acetate-buffered saline.

For labeling, the reduced HAb18 F(ab’)2 was mixed with glucoheptonate (GH) solution, SnCl2 solution, and 50-100 μL perihenium solution for 2-3 h at 37 °C before it was analyzed by Whatman 3MM paper chromatography which was then developed in 100 g·L- 1 trichloroacetic acid (TCA). Rª-f (distance of some composition moved/distance of extended reagent moved) values for 100 g·L-1 TCA are: mAb 0.0, 188Re-GH 0.7, and 188ReO-4 0.7. Labeled mAb was differentiated from 188Re colloid by the method of Thrall et al[33]. The same strips impregnated with 10-20 g·L-1 human serum albumin before development with 5V:2V:1V; water: ethanol: 5 mol·L-1 NH4OH(volum ratio). Colloid remained on the bottom of the strip while mAb-bound isotope migrated with the solvent front.

The in vitro immunoreactivity of the radiolabeled HAb18 F (ab’)2 was evaluated by a live cell assay[9]. Briefly, 5 × 109·L-1 HCC cells were centrifuged at 1000 r·min-1 for 5 min and washed twice with 1 g·L-1 bovine serum albumin (BSA) in PBS, then 5 serial 1: 2 dilutions were made up in 10 g·L-1 BSA in Eppendorf tubes precoated with BSA. Radiolabeled HAb18 F(ab’)2 at a mass concentration of 40 μg·L-1 in 10 g·L-1 BSA was added using a volume equal to half the volume of cell suspension. The total volume of cell-binding assay solution was 0.3 mL. After incubation for 2 h at 37 °C, the total as well as the cell-bound radioactivity were counted in a gamma counter.

Study of biodistribution in nude mice

Fifteen hepatoma-bearing nude mice were divided into 5 groups randomly, the mice were tail-vein injected via tail vein with 1.85MBq188Re-HAb18 F(ab’)2 in a volume of 0.1 mL and then they were sacrificed at 1, 4, 18, 24 and 48 h (3 mice at each time). Samples of tumor, heart, liver, spleen, lung, kidney, large intestine, small intestine, muscle,bone were taken and weighed carefully. In addition, the blood sample was drawn from the heart. The radioactive concentrations in tissues were calculated and expressed as percent injected dose per gram(% ID·g-1). The radioactivity of tumor/no tumor(T/NT) was also calculated.

Table 1 shows the biodistribution of 188Re-HAb18 F(ab’)2. The blood concentration was measured by 3P97 software, which fits the 1-compartment model(Table 2). Figure 1 shows the curve of concentration-time in nude mice, and Table 3 shows the parameters of pharmacokinitics. The half-time(h) of each tissue was: tumor (32.99), blood (2.99), lung (5.67), bone (11.76), muscle (9.22), small intestine (7.47), large intestine (15.08), heart (2.29), liver (5.67), spleen (19.76),and kidney (11.53). Table 4 illustrates the influence of various concentrations of SnCl2 and GH on the free 188ReO-4 amounts, colloid amounts and labeling efficiency. Optimal complexation with labeling efficiency of 91.7% was achieved in 0.8 mol·L-1 GH and 2 g·L-1 SnCl2 solution. As shown in Figure 2, the immunoreactive fraction, 0.78 was determined by plotting the inverse of the bound fraction as compared with the inverse of the cell concentration, which is based on the assumption that the total antigen concentration (i.e., cell density) is a good approximation for the free antigen concentration. 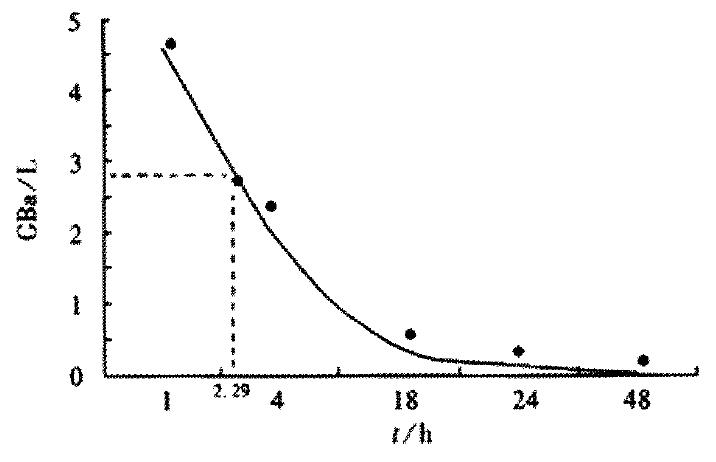 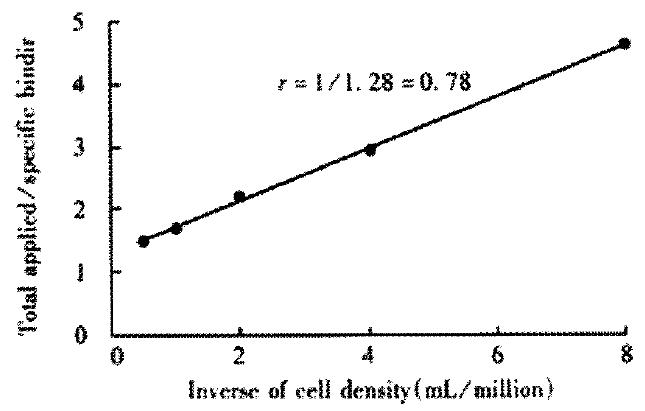 The occurrence of hepatoma is high in Southeast Asia, East Africa and Middle Africa. In China, hepatoma is one of the most three common cancers related death, but there is no effective treatment[34-45]. The therapy of hepatoma includes surgical operation, chemotherapy and radiotherapy. Targeting diagnosis and therapy of hepatoma with anti-hepatoma Mab have been developed quickly,giving a hopeful prospect to hepatoma treatment. Our reaserch focuses on the targeting therapy of hepatoma[46-48]. 188Re is a generator-produced radioistope which can be obtained. There were some studies on the biodistribution and pharmacokinetics of 188Re-mAb. Safavy et al[49] have reported biodistribution of 188Re-labelded trisuccin-HuCC49 and tisuccin-C49deltaCh2 conjugates in athymic nude mice bearing intraperitoneal coloncer xenografts.188Re-labeled mAb was injected,and the mice were sacrificed 24 h postinjection. Biodistribution of the radiolabeled mAb at 24h after injection showed median tumor uptake values of 23.5%ID·g-1 and 17. 6%ID·g- 1 for the 188 Re-C49deltaCh2 and 188 Re-HuCC49, respectively. Yang et al[50] have prepared the conjugate of staphy-lococcal exterotoxin A(SEA) protein which is a bacterical Sag and the F(ab’)2 fragment of HAb18. The F(ab’)2 fragment of mAb HAb18 was prepared by papainic digestion method. The conjugate of mAb HAb18 F(ab’)2 fragment and SEA was prepared with chemical conjugating reagent N-succinimidy1-3-(2-pyirdyldithio) propionate (SPDP) and purified through chromatography column Superose 12 with FPLC system. The molecular mass was identified with SDS-PAGE assay,the antibody activity of in the conjugate was determined by indirect immunocytochemical ABC method. SEA is a protein, the method of labeling is indirect, SEA and antibody are conjugated by SPDP. 188Re’s labeling method is direct,it is more convienient and quicker than indirect method. In the animal experiment, 188Re -HAb18F (ab’)2 can inhibit the growth of tumor, but the pharmacokinetics of 188Re- HAb18F(ab’)2 in animal is seldom reported.

From 3P97 software, we can see the pharmacokinecs of conform to a 1-compartment model.Table 2 shows the criteria for goodness of fitting. we can judge the compartments from R squares, goodness of fit and AIC.1,1/C,1/C/C represented three weights.To the same weight,when the F test has marked significance (P < 0.05 or P < 0.01),we should choose the compartment of small AIC,and when the F test has not prominent significance (P > 0.05),we should choose the small compartment[53]. From Table 2, it can be seen that the 1-compartment model is the best. 188Re-HAb18 F(ab’)2 can distribute to the whole body instantly.The elimination rate was corresponded to the concentration of the drug. The higher the concentration was, the higher the speed of elimination was.

The half-time was 32.99 h in tumor, being much longer than that in any other organs.It showed that 188Re- HAb18 F(ab’)2 was located specifically in hepatoma and the elimination was low. It also showed the higher selective reactivity of HAb18 F(ab’)2 with hepatoma, the harmness to other organs was small. The half-time was 2.29 h in blood, and was 32.99 h in tumor,the radioation of blood can decrease more rapidly than that of the tumor. The half-time of 188Re was 17h, which was also lower than that in blood, so the 188Re can be eliminated through the blood. It has excellent value in the clinical therapy[54-62].

Carrier-free 188Re is one of βemitting radionuclides recommended for RAIT because of suitable decay characteristics and availability from 188W/188Re generator. Some methods are reported in the literature for labeling mAb with 188Re which imitate the labeling method of 99Tcm. 188Re eluted from generator will not bind to organic ligands without reduction to a lower oxidation state. We selected SnCl2 as reductant and GH as transfer ligand and stablizer to avoid Sn-or Re-collide formation. Table 1 shows that the concentration of SnCl2 and GH solutions is an important parameter to obtain good labeling results. The low percentage of free 188ReO-4 and radiocolloid shows that 0.8 mol·L-1 GH and 2 g·L-1 SnCl2 are the optimal values. Under these conditions, the labeled HAb18 F(ab’)2 keeps its immunoreactivity (Figure 2).

We believe that a variety of factors make 188Re a potential alternative to other β-emitting radionuclides for RAIT. They include an efficient generator system and the direct labeling of IgG at high specific activity. The enchanced clearance of 188Re-IgG from the circulation and the retention of immunoreactivity and tumortargeting of the Re-mAb conjugate are also important factors. In addition, the low-energy(155 keV,15%) γemission for imaging and the lack of accretion of metabolic products in nontarget tissues are important characteristics for further evaluation of 188Re-labeled antibodies for tumor therapy.