AIMS: To study the pathologic classification of gastric neuroendocrine tumors and its clinicopatho-logic significance.

RESULTS: The 52 gastric neuroendocrine tumors were divided into three types: ① Gastrin dependent type of carcinoid (26 cases) accompanied by chronic atrophic gastritis (CAG) and tumor extension limited to the mucosa or submucosa complicated with hypergastrinemia and G cell hyperplasia. This type was consistently preceded by and associated with generalized proliferation of endocrine cells in the extratomoral fundic mucosa. ② Non-gastrin dependent type of carcinoids (16 cases) associated with neither CAG nor hypergastrinemia. This type was more aggressive; and ③ Neuroendocrie carcinomas (10 cases), which are highly aggressive tumors.

CONCLUSIONS: A correct identification of different types of gastric endocrine tumors has major implications for the treatment and prognosis of the patients.

According to recent literature, gastric carcinoids incidence ranges from 11% to 41% of all gastrointestinal carcinoids[1,2]. Until a decade ago, however, it was regarded as pathological curiostry accounting for about 3%[3]. It was recognized that gastric neuroendocrine tumors cover a spectrum of neoplasms showing wide variations in their clinicopathological features, prognosis and pathogenetic mechanisms[4,5]. The classification of gastric neuroendocrine tumors (GNET) is of some value in its treatment and prognosis[6]. This paper is to study clinicopathologic classification of GNET for the correct management of patients.

A total of 42 cases of gastric carcinoid were collected in Parma University, Italy (29 cases) and China (13 cases). Ten cases of neuroendocrine carcinoma were identified from 326 resected gastric carcinomas by immunostaining and electromicroscopy.

Formalin-fixed and paraffin-embedded tissues were available and the blocks of specimens included tumor and extratumoral mucosa. A series of 15 sections (5 μm thick) were cut from each block. Hema-toxylin and eosin, Acilan blue pH2.5-periodic staining were carried out. The cellular localizations of neuroendocrine substances were detected by the avidinbiotin ª²peroxidase complex method (ABC kit, K355; Daco, Carpenteria, CA, USA). The primary antibodies and positive controls are listed in Table 1. All antibodies were polyclonal except serotonin and bombesin. Peroxidase was revealed using diaminobenzidine tetrahydrochloride (DAB) and H202. Control of specificity of the immunoreaction was performed by incubating consecutive sections with nonimmune serum instead of the primary antiserum or with the specific antisera preabsorbed with the excessive amounts of the respective antigens.

Fasting serum gastrin was determined in 33 of 42 carcinoid patients and 8 of 10 neuroendocrine carcinomas.

Type 1. Gastrin dependent carcinoid (26 cases), with a mean age of 58.2 years (range 27-88 years), a female to male ratio of 1.36:1. Eleven cases are single tumors appearing as polypoid lesions. Eight of them were < 1 cm in maximum diameter, 2 were 1 to 1.5 cm, and only one was 2.5 cm. Fifteen multiple tumors were 1.0 cm-1.5 cm in each one. In histological structure the carcinoids appeared either trabecular or in solid arrangement (Figure 1). Tumor cells were monomorphic and medium sized in regular shape and with round nuclei. Mitoses were either absent or seen occasionaly. Sixteen cases confined to the gastric mucosa and 4 cases to the submucosa. One case was found to have lymph node metastases, and no distal metastases was found. 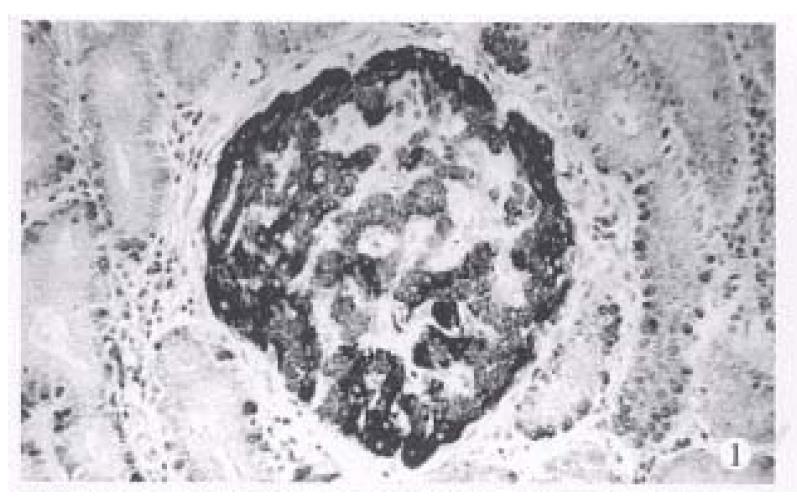 This type of carcinoids is associated with CAG and proliferation of endocrine cells in extratumoral fundic mucosa. It includes hyperplasia as simple, linear, micronodular and adenomatoid hyperplasia and dysplasia as enlarging, fusing micronodules, invasive lesion and nodule with newly formed stroma. When at a diameter of 0.5 mm, it was defined as carcinoid tumor. The hyperplasia and dysplasia (Figure 2) of endocrine cells in extratumoral mucosa were found in all 26 cases. The fasting serum gastrin of 21 of 26 cases were examined before operation and all had hypergastrinemia, ranging from 700 ng/L-1000 ng/L (normal is 100 ng/L). G cell hyperplasia in antrum was observed in 24 cases and antrum mucosa was investigated. Nine of 11 cases of single tumors underwent polypectomy, and 2 cases partial gastrectomy, and 15 multiple tumors received antrectomy. Eighteen cases were followed up, there were 3 deaths with a mean survival of 40 months, which was unrelated to the gastric carcinoid. After a mean of 64 months, 15 were alive. 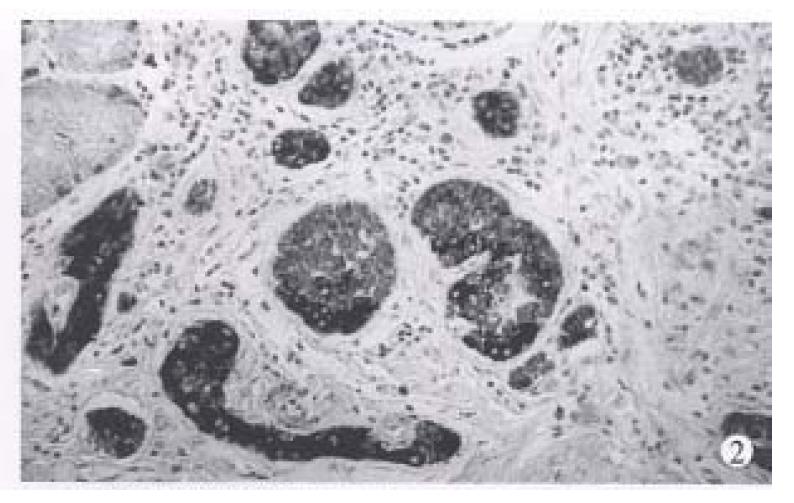 Type 2. Non-gastrin dependent carcinoid (16 cases). The mean age was 53.8 years (range 42-61 years), a female to male ratio of 0.6:1. All tumors were single with a median diameter of 2.5 cm. Tumors showing moderate enlargement of lobules and trabeculae and moderate cellular atypia included nuclear polymorphism, hyperchromasia, prominent nuceoli and slight increase in mitotic count (< 1 per 2 HPF) (Figure 3). Small necrosis may also be found. The muscularis propria or serosa were invaded in 11 of 16 cases (68.8%). Local lymph node metastases were found in 9 (56%) cases and distant metastases were seen in 5 (31%) patients. The circulating gastrin of 12 of 16 patients was examined and had normal levels. No antral G cell hyperplasia was found in 13 of 16 cases. Two of 16 patients displayed hyperplasia of endocrine cells in extratumoral mucosa and none had dysplasia. Among 14 cases followed up died with a mean survival of 32 months and 10 were alive after a mean follow-up of 72 months. 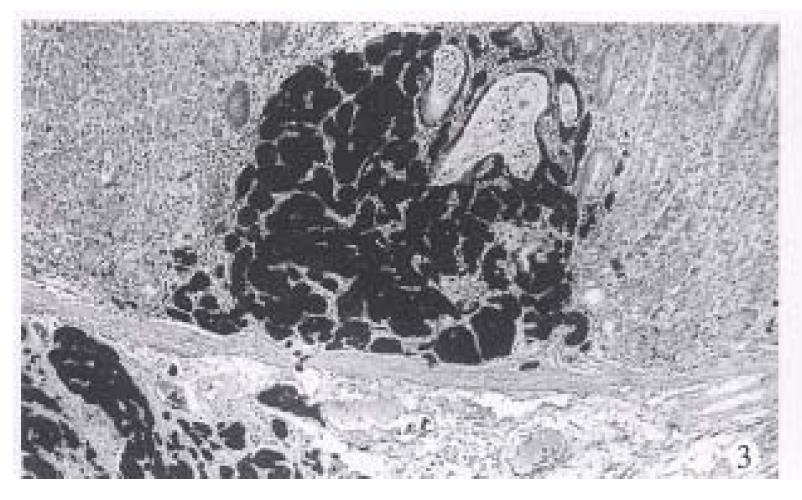 Type 3. Neuroendocrine carcinomas (10 cases). The mean age was 62.8 years (range 57-78 years), 8 men and 2 women. All tumors were single, with an average size of 5.1 cm (range 3.0 cm-8 cm). Histologically, they were characterized by large, poorly defined, solid aggregates or diffuse shets of round or spindle cells (Figure 4). Mitoses were usually abundant (> 1 per HPF). Focal necrosis was common. The extratumoral mucosa was associated with chronic atrophic gastritis in six cases. Ultrastructural evidence of endocrine type cytoplasmic granules was found in 8 cases examined. The hypergastrinemia was found in only one of 5 cases. 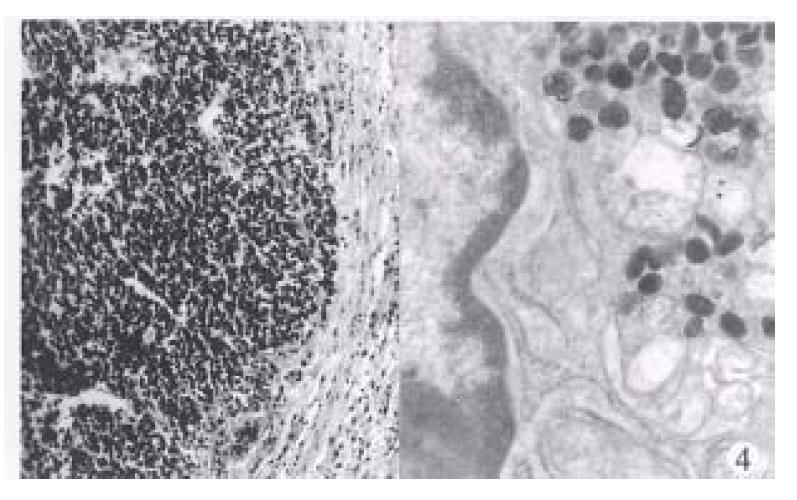 Carcinomas invaded the gastric wall, reaching the muscularis propria in three cases (30%), and serosa in seven (70%). Eight cases showed metastases to local lymph nodes and two to livers. Deaths were observed in seven cases with a mean survival of 8 months (range 2-10 months) after a mean follow-up of 54 months.

Table 3 and Figure 5 summarize the clinicopathological characters and survival of variations of gastric neuroendocrine tumors. 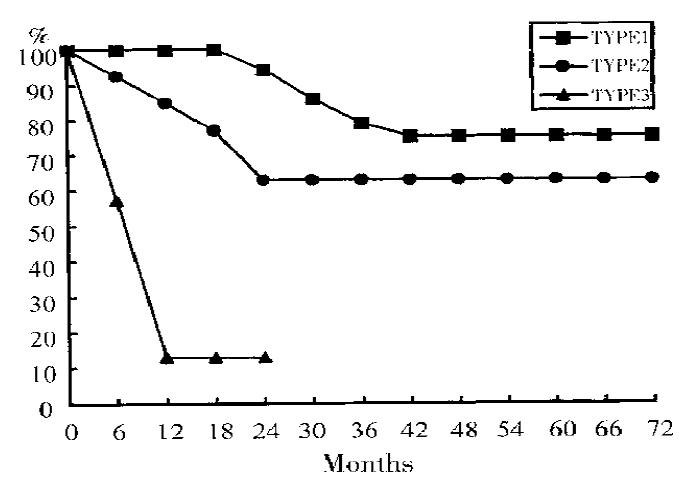 The result of features of 26 cases of gastrin dependent carcinoid type is in agreement with some previous reports in which it was named as carcinoids associated with atrophic gastritis. This type is either single (polypoid lesions) or multiple tumor. The histological features show typical carcinoids. Tumor extension limited to the mucosa or submucosa. Gastrin dependent carcinoids are consistently associated with generalized proliferation of endocrine cells in the extratumoral fundic mocosa. A histopathological classification has been formulated for the spectrum of proliferative lesions presented by fundic endocrine cells of hypergastrinemic patients. The clas-sification arranged in a sequence presumed to reflect the temporal evolution of the process and the in-creasing oncologic risk for the patients[5,6]. Our data also provide a rationale for the treatment of single carcinoids with tumorpolypectomy followed by regular endoscopic follow-up. In the patients with multiple tumors, antrectomy is recommended. Postantrectomy regression of proliferating gastric endocrine cells was documented in several cases.

The 16 cases of non-gastrin dependent type which correspond to Solcia’s carcinoids of sporadic type[7,8] had single tumors. They usually presented with typical carcinoid features by slight increase in mitotic count (< 1 per HPF). Serum levels of gastrin were in the normal range. These tumors appear free from hypergastrinemia and should not benefit from antrectomy. Their aggressive behavior dictated a complete surgical ablation.

The type of neuroendocrine carcinomas composed mainly of cells was strongly positive for endocrine markers (Cg A, SP or hormonal products). Those positive cells were major parts of the tumor (> 50%). Although neuroendocrine differentiation is not a rare phenomenon in common gastric carcinoma (3.1%-53.5%)[9] but neuroendocrine carcinoma of the stomach was found infrequently. In this series, 10 (3.1%) were identified from 326 gastric carcinomas. The endocrine granules were observed by trasmission electron microscopy. This type of carcinomas is high-grade one. Tumors were considered aggressive cancers with poor prognosis showing large tumors (mean 5.1 cm) with deep invasion and metastasis. The surgical resection is the most appropriate form of treatment for this type and the usefulness of multiagent chemotherapy remains to be evaluated in larger series of patients.

Immunohistochemically, no significant specific differences were found in the three types of neu-roendocrine tumors of stomach[4,10]. Types 1 and 2 of carcinoid were mostly composed of ECL cells which produce histamine[5,6]. The eight hormonal antibodies used in the study showed a various amount of positive expression in neuroendocrine tumors of stomach. Further investigations are needed to elucidate the significance of hormones produced by those tumors.

In conclusion, neuroendocrine tumors of the stomach cover a spectrum showing wide variations in their clinicopathological features, prognosis, and pathogenetic mechanisms. It has implications for the treatment.

Supported in part by grants from Medical Science Council of Chinese PLA, No. 96MB01.