Genome-wide association studies from Asia indicate that HLA-DP and HLA-DQ loci are important in persistent hepatitis B virus (HBV) infections. One of the key elements for HBV-related carcinogenesis is persistent viral replication and inflammation.

To examine genetic and nongenetic factors with persistent HBV infection and viral load in families with hepatocellular carcinoma (HCC).

In the first-stage persistent HBV study, all SNPs except rs9272105 were associated with persistent infection. A significantly higher area under the reciprocal operating characteristic curve for nongenetic factors vs genetic factors (P < 0.001) suggests that the former play a major role in persistent HBV infection. In the second-stage viral load study, we added 8 HBsAg carriers born after 1984. The 309 HBsAg carriers were divided into low (n = 162) and high viral load (n = 147) groups with an HBV DNA cutoff of 105 cps/mL. Sex, relationship to the index case, rs477515, rs9272105, and rs7756516 were associated with viral load. Based on the receiver operating characteristic curve analysis, genetic and nongenetic factors affected viral load equally in the HCC family cohort (P = 0.3117).

In these east Asian adults, the mechanism of persistent HBV infection-related SNPs was a prolonged viral replication phase.

Chronic hepatitis B is a global disease, with the highest prevalence in Africa and Asia[1,2]. Hepatitis B virus (HBV) is highly infectious[3,4], and those who are infected early in life are likely to develop a persistent infection[5-7]. Intra-familial spread of infection is common, resulting in the clustering of chronic hepatitis B surface antigen (HBsAg) carriers and hepatocellular carcinoma (HCC) in families[8-10]. Recent genome-wide association studies (GWASs) in Japan, Korea, Saudi Arabia, China, and Taiwan have consistently shown that single nucleotide polymorphisms (SNPs) at the HLA-DP and HLA-DQ loci play important roles in persistent HBV infection[11-19]. However, risk alleles of HBV-related SNPs are not present in the majority of Africans[20,21], so the high prevalence of HBsAg carriers in Africa cannot be completely explained by the SNPs.

It is well known that clearance of the hepatitis B e antigen (HBeAg) occurs earlier in African than in Asian HBsAg carriers[22-25]. In east Asia, the annual HBeAg seroconversion rate is < 2% in children younger than 3 years of age and around 5% in children older than 3 years of age[22,23]. On the contrary, an HBeAg annual clearance rate of 14%-16% has been found in Euro-Mediterranean and African children[24,25]. HBeAg clearance is associated with a decreased viral load and results in a decrease of perinatal infections and the development of chronic persistent HBV infection[7,23]. We propose that persistent HBV infection-related SNPs may be one of the reasons for the prolonged HBV replication phase in east Asians. To evaluate this hypothesis, we analyzed the HBV-related SNP and demographic data obtained from HCC families. HCC families are known to have higher perinatal transmission and a longer HBV replication phase than the general population[9,10]. We expect that the genetic and nongenetic factors characteristic of HCC families may help us to understand the nature of persistent HBV infection.

Our study was approved by the institutional review board of Chang Gung Memorial Hospital, Taiwan (IRB 104-2596). Written informed consent was obtained from all participants. All experiments and data comparisons were carried out in compliance with relevant laws and guidelines, and complied with the ethical standards of the Declaration of Helsinki.

Patients with HCC who were diagnosed at Chang Gung Memorial Hospital, Lin-Kou Medical Center were included as index cases. From 2003 to 2007, relatives of the patients were prospectively invited to complete a liver disease survey. The details of the survey can be seen in our previous report[10]. Briefly, after confirmation of their relation to the index HCC patient, the relatives received a structured questionnaire and underwent assessments of their liver biochemistry, alpha-fetoprotein, viral markers, and HBV genotyping. Peripheral blood samples were collected for host genome analysis.

We calculated sample sizes and statistical power to detect genetic effects in the study. The calculation considered the impact the minor allele frequency (MAF, from 0.1 to 0.4), odds ratio (OR, from 1.05 to 3), statistical power (from 0.5 to 0.9) and measurement error (type I error = 0.05) have on sample size. Power calculations were performed with QUANTO power calculator, version 1.2.4 (https://preventivemedicine.usc.edu/download-quanto/).

Individual locus analysis: We assessed the association of SNPs with persistent HBV infection or viral load in an additive genetic model using univariate and multivariate logistic regression of the data from unrelated male participants. In the family analysis, relatives included individuals living in the same household. First- and second-stage analyses were conducted with a generalized estimating equation (GEE) that included data correlated with a binary response (e.g., to HBsAg status and HBV DNA level) using an exchangeable working correlation structure[28,29]. Univariate and multivariate analysis of the first- and second-stage results were assessed using the GEE method combined with the PROC GENMOD procedure in SAS 9.3 (SAS Institute). ORs were reported with 95% confidence intervals (CIs).

Weighted genetic risk score calculation: The weighted genetic risk score (WGRS) was calculated for the SNPs that were significantly associated with persistent infection or viral load. We assumed that each SNP was independently associated with risk according to an additive genetic model. The WGRS was calculated by multiplying the number of risk alleles at each polymorphic locus (0, 1, or 2) by each person for the corresponding relative logarithm of the OR (wi) from the multivariate individual locus analysis and rescaling it with the factor m/∑iwi, as follows: WGRS = (m/∑iwi)·∑wini, where m is the number of statistically significant SNPs and ni is the number of risk alleles for SNPi[30]. We divided the continuous WGRS into quartiles (Q1-4) and compared the risks among them.

Evaluation of genetic and nongenetic factors: We analyzed factors associated with persistent HBV infection or viral load using the logistic regression model unrelated participants and the GEE method for family data. Three prediction models were used: (1) The genetic model included only SNPs and WGRS; (2) The nongenetic model included only demographic data; and (3) The mixed model included both genetic and nongenetic variables. The contribution of the WGRS was evaluated using the area under the receiver operating characteristic curve (AUC), net reclassification improvement (NRI) method[31], and integrated discrimination improvement (IDI)[32] with the prediction model with and without the WGRS. To assess the demographic impact of including the WGRS in the model, an AUC of 0.5 indicated no discrimination and an AUC of 1 indicated perfect discrimination. The NRI indicated the proportion of subjects reclassified correctly (NRI > 0) or incorrectly (NRI < 0) into the various risk categories. An IDI > 0 indicated a statistically significant prediction of improvement as a result of adding variables to the model.

The HCC family cohort included 835 participants (Figure 1), of whom 301 HBsAg-positive and 424 of HBsAg-negative family members were selected for the first-stage HBV infection-persistence analysis. We excluded those born after the nationwide vaccination program was initiated in 1984. In the second-stage viral load study, we added 8 HBsAg carriers born after 1984 (Figure 1). A cohort of 309 HBsAg carriers was divided into high (n = 147) and low (n = 162) viral load groups using an HBV DNA cutoff of 105 cps/mL. 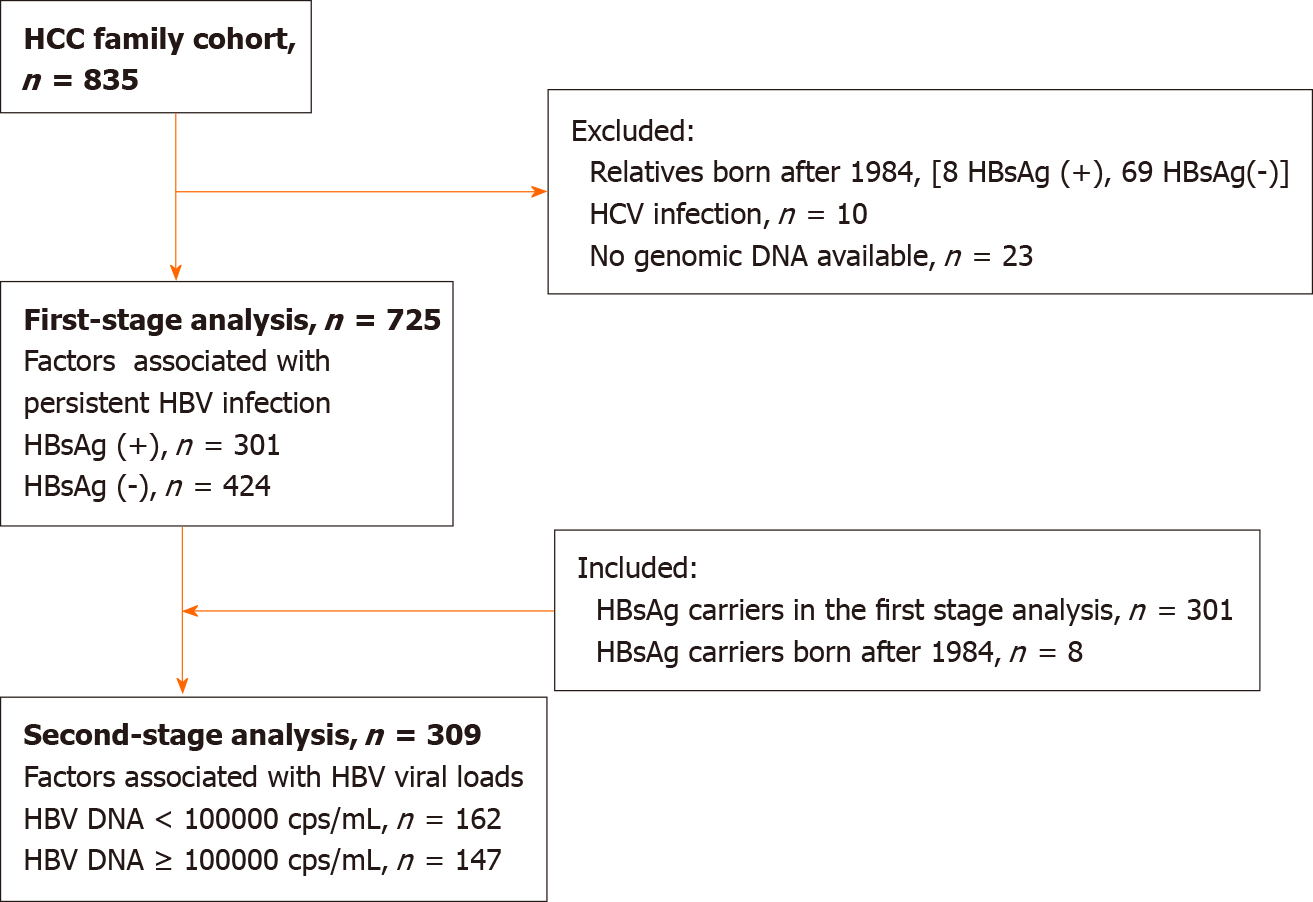 In the presence of SNPs identified in a GWAS, nongenetic factors remain important in persistent HBV infection. The persistence of infection induced by the SNPs might depend on a delay in clearance of the HBeAg. It is known that in HBsAg carriers, HBeAg clearance occurs earlier in African than in Asian populations[22-25]. That means East Asians of reproductive age are likely to have higher HBV viral loads and a higher rate of perinatal HBV infection of their babies[7,10,22,23]. Perinatal infection usually persists as a chronic infection[7,23]. As African women usually clear HBeAg before reproductive age[24,25], the viral load during pregnancy is likely to be lower than that in East Asians, which would decrease the chance of perinatal HBV infection[24]. We suspect that a prolonged HBV replication phase in parents could be the mechanism of persistent HBV infection associated with SNPs.

Univariate analysis of the factors associated with HBV viral load in the HCC family cohort revealed that three of the five SNPs (rs477515, rs9272105, rs7756516) differed significantly between the high and low viral load groups (Table 4). The cumulative effect of the WGRS was also greater in the high viral load group (Table 3, lower panel). Multivariate GEE analysis found that the rs477515 SNP (OR = 2.242, P = 0.0238) and WGRS (OR = 1.567, P < 0.0001) were independently associated with a high viral load in the mixed model (Table 5). Our data thus support the prevailing view that the SNPs associated with persistent HBV infection promote persistent HBV replication. The mean ages of our study groups ranged from 41.25-45.03 years (Tables 1 and 4). Persistent high viral loads in these age groups were likely to have resulted in perinatal transmission of chronic HBV infection during the reproductive age.

This study provides information that may help to establish more accurate models of disease through the incorporation of genetic and nongenetic factors, but it was limited by the relatively small number of HCC families. Another limitation was that HBV genotype studies were not available in patients with low viral loads. HBV genotype C has been associated with a lower HBeAg clearance rate than genotype B[40]. We found a high adjusted OR (2.066, P = 0.0515) for the association of genotype C with a high viral load relative to a low viral load in this HCC family cohort (Table 4).

We conclude that SNPs associated with persistent HBV infection prolong the replication phase in the parent generation and increase the burden of persistent infection in the offspring generation.

Genome-wide association studies (GWASs) in Asian populations indicate that the HLA-DP and HLA-DQ loci are involved in the persistence of hepatitis B virus (HBV) infections. Persistent viral replication and inflammation are key influencers in HBV-related carcinogenesis.

HBV-related single nucleotide polymorphisms (SNPs) have been identified in east Asian populations but are uncommon in African populations. Different mechanisms may drive persistent infection in those regions.

We examined genetic and nongenetic factors associated with persistent HBV infection and viral load in families with hepatocellular carcinoma (HCC).

HCC families were enrolled. Five HBV-related SNPs (rs477515, rs9272105, rs9276370, rs7756516, and rs9277535) were genotyped. Factors associated with persistent HBV infection and viral load were identified with the use of generalized estimating equations.

In the first-stage persistent HBV study, all SNPs except rs9272105 were associated with persistent infection. A significantly higher contribution of nongenetic than genetic factors (P < 0.001) to persistent HBV infection was found. In the second-stage viral load study, sex, relationship with index case, rs477515, rs9272105, and rs7756516 were associated with viral load. Receiver operating characteristic curve, and genetic and nongenetic factors had equal effects on viral load in the HCC family cohort (P = 0.3117).

Termination of the HBV replication phase before pregnancy will be a therapeutic goal in East Asian countries.

Corresponding Author's Membership in Professional Societies: American Association for the Study of Liver Diseases, No. 139352; The Gastroenterological Society of the Taiwan, No. 398; The Ultrasound Society of the R.O.C., No. G355.