Pancreatic cancer is a deadly malignancy with aggressive properties. MicroRNAs (miRNAs) participate in the pathogenesis of a variety of diseases and molecular processes by targeting functional mRNAs. Nevertheless, the regulatory role of miRNAs in signaling pathways involved in pancreatic cancer remains largely unknown.

To explore the molecular regulation involved in pancreatic cancer and potential mechanisms of miR-205.

The above findings suggested that miR-205 mediated APC regulation contributes to pancreatic cancer development, which could be considered as a novel prognostic biomarker for clinical care.

Pancreatic cancer is a severe malignancy with a five-year survival rate of less than 5% worldwide, due to its late detection, metastasis, and resistance to treatment such as chemotherapy and radiation therapy[1-3]. There are over 60 types of genetic mutations in pancreatic cancer according to previous studies, and these mutations have been related to several signaling pathways. Nevertheless, the regulation of these pathways in pancreatic cancer remains largely unknown[4-6]. Therefore, the exploration of molecular mechanisms involved in pancreatic cancer will be necessary and useful to improve its current therapy status.

In recent years, microRNAs (miRNAs) are emerging as important regulators in cancer development and play important roles in many physiological and pathological processes such as tumor growth, biosynthesis, immune regulation, and drug re-sistance[7-9]. MiR-205 has been found to play a role in various cancers[10,11], but there has been no relevant report in pancreatic cancer. Adenomatous polyposis coli (APC) is a tumor suppressor protein that is involved in biological processes including transcriptional activation, apoptosis, cell migration, and cell adhesion[12,13]. Besides, APC has been found to have an important role in pancreatic cancer in a previous study[14].

Cells were cultured in RPMI 1640 (Hyclone, CA, United States) supplemented with FBS, streptomycin, and penicillin in a humidified chamber at 37 °C. Transfection was performed using Lipofectamine 2000 reagent in accordance with the manufacturer’s instructions. The transfection efficiency was assessed by detecting the fluorescence of red fluorescent protein expressed by the transfection vector.

The cancer samples and controls were analyzed through Agilent microRNA microarray (v14.0). First, the raw data presented as gProcessedSignal were normalized. The differential expression was filtered by fold change > 2 and P-value < 0.05, and all bioinformatics computations were performed using R script[15]. The prediction of miRNA targets was performed with miRDB[16] and targetScan[17]. Functional analysis was performed with KOBAS[18] software.

In accordance with the manufacturer’s protocol, total RNA was isolated from each sample with Trizol (Invitrogen, CA, United States) and treated with DNase I (Invitrogen, CA, United States) to remove residual DNA. Then, RNA was reverse-transcribed into cDNA. MiRNAs were reverse-transcribed using the Mir-XTM miRNA Synthesis Kit (Clontech, Shanghai, China) according to the manufacturer’s protocol. For miRNA targets, the primary transcript levels were determined with the SYBR Green Master. The sequence-specific primers for the target genes were retrieved from PrimerBank database. MiRNAs and mRNAs were normalized into U6 and GAPDH, respectively.

After 24 h transfection of miR-205 mimic and inhibitor, cells were put into 96-well plates for 12 h at a density of 3 × 103 viable cells/well. MTT assay was conducted on a spectrophotometer (Shimadzu, Columbia, SC, United States) at 490 nm to observe cell viability. For colony formation assay, the treated cells were plated and cultured in 6-well plates for 2 wk. After paraformaldehyde (Saier Biotechnology, Tianjin, China) was applied to these cells, the number of colonies was counted as cells were stained with crystal violet (Saier Biotechnology, Tianjin, China).

A total of 52 pancreatic cancer patients who received examination during their stay in Handan Central Hospital from July 2014 to November 2017 were collected. After ruling out other relevant diseases, 41 patients aged < 87 years were included in the experiment group, including 16 women and 25 men. The age, height, weight, and tumor stage were recorded as shown in Table 1.

To explore the pancreatic cancer-related miRNAs, microarray analysis was performed on five cancer tissue samples and five healthy control samples. The data demonstrated that a list of miRNAs were differentially expressed in pancreatic cancer (P < 0.05, fold change ≥ 2) (Figure 1A), including 79 up-regulated and 128 down-regulated miRNAs. Furthermore, we sorted out top 20 differentially expressed miRNAs with relatively large differences, including miR-205-3p, miR-216a, miR-216b, miR-148b, miR-30a, miR-6130, miR-155, miR-5704, miR-222, miR-221, miR-21, miR-631, miR-181a, miR-6754-3p, miR-6817-5p, miR-3928-5p, miR-6805-5p, miR-199a-3p, miR-4726-5p, and miR-6845-3p. The hierarchical clustering analysis was performed to demonstrate their expression patterns, as shown in Figure 1B. Among these miRNAs, miR-205 expression level was significantly increased in pancreatic cancer and there has been no relevant report about its mechanisms of action. 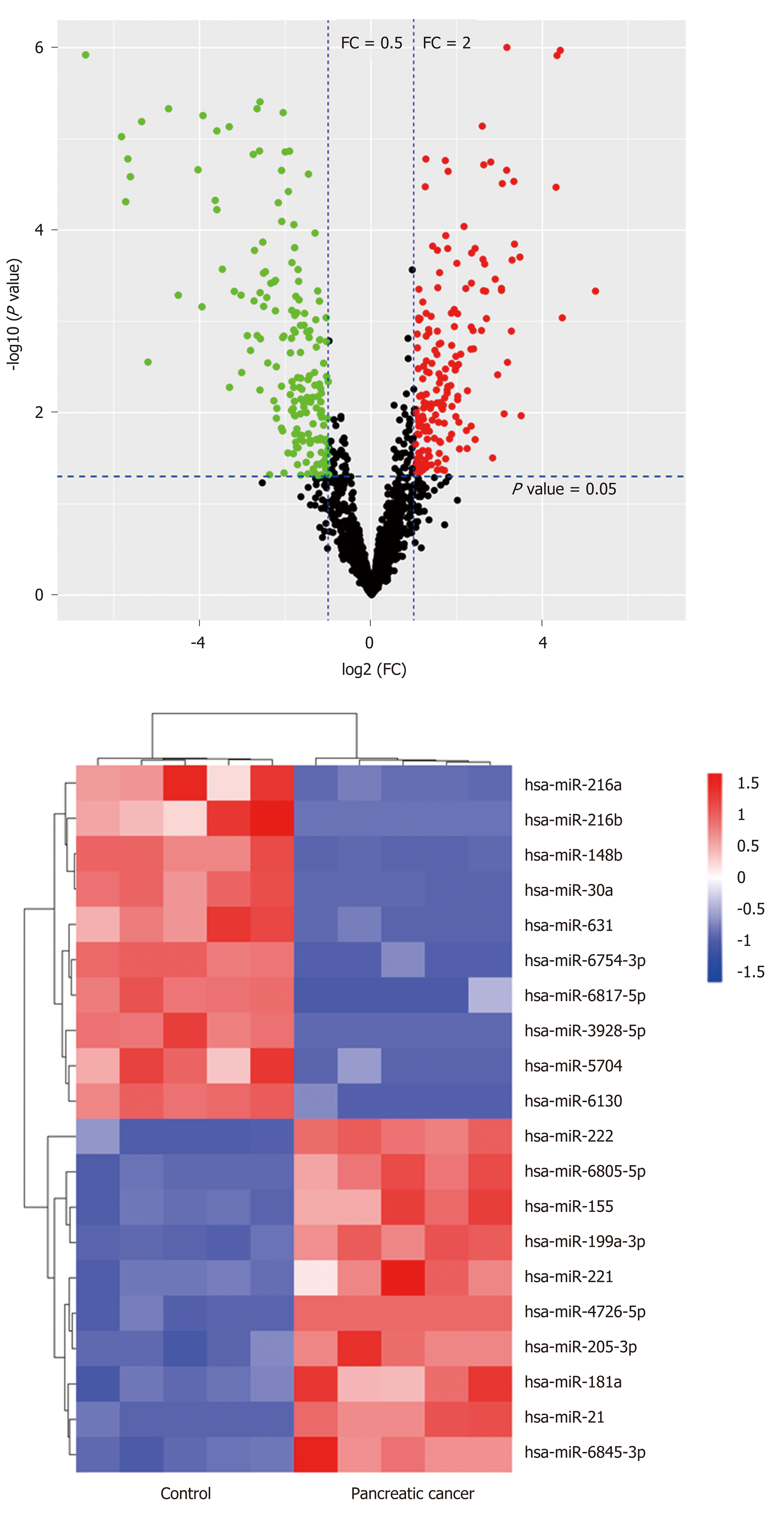 To further verify the miR-205 expression level, qRT-PCR was performed on patient samples and three pancreatic cancer cell lines as described in the Methods section. MiR-205 showed increased expression in cancer samples compared with healthy tissues (n = 41 each; Figure 2A). Similarly, miR-205 also showed an increased expression level in three pancreatic cancer cell lines compared with HPDE6 cells (Figure 2B). MTT assay was performed in PANC-1 cells and control cells, and the results demonstrated that miR-205 overexpression in PANC-1 cells could notably increase the growth rate while an opposite result was observed in miR-205 down-regulated PANC-1 cells, as shown in Figure 2C. We then performed colony formation assay to assess its potential impact on cell proliferation. The results showed that proliferation of PANC-1 cells was increased after transfection with miR-205 mimic, as shown in Figure 2D. Collectively, these findings demonstrated that miR-205 may exert a tumor-promoting effect in pancreatic cancer. 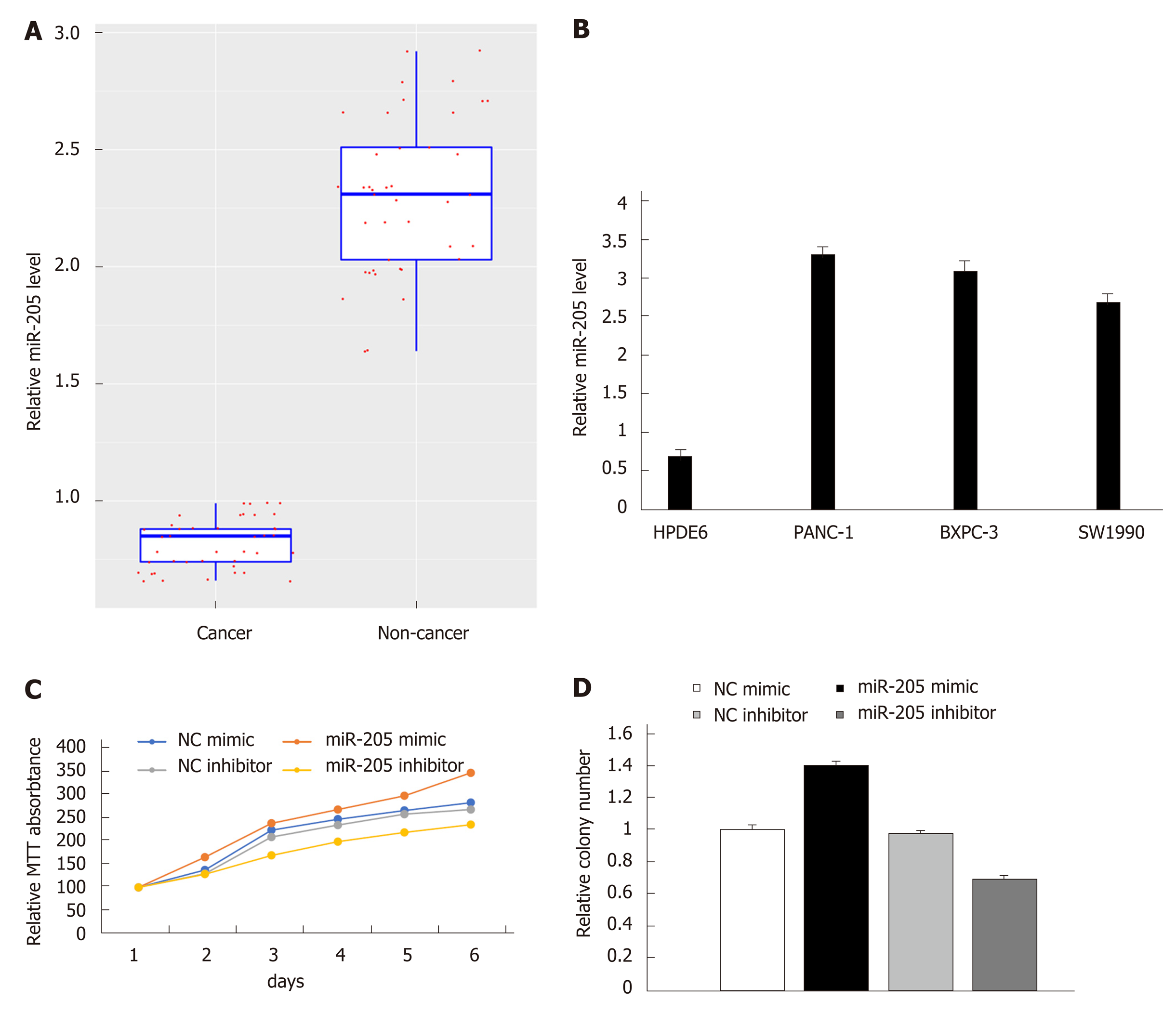 In order to investigate the molecular mechanism of miR-205, we performed target prediction and functional enrichment analysis of the targets using bioinformatics tools. A total of 168 targets were mapped to KOBAS database and subjected to GO/pathway analysis. According to the GO enrichment results, these genes participate in the regulation of cellular components, biological processes, and molecular functions. The bar chart shows that these genes are related to plasma membrane part, cell projection, and neuron part in the cellular components category, and are involved in signaling, cell communication, and developmental process in the biological processes category. Moreover, the molecular functions category showed that these genes mainly play a role in signaling and transmembrane receptor activity (Figure 3). According to the pathway analysis results, the target genes are related to cytokine-cytokine receptor interaction, regulation of IFNA signaling, and the TGF-β signaling pathway (Figure 4). Furthermore, we noticed that APC is a potential target of miR-205, which has been discovered to play an important role in the development of pancreatic cancer. 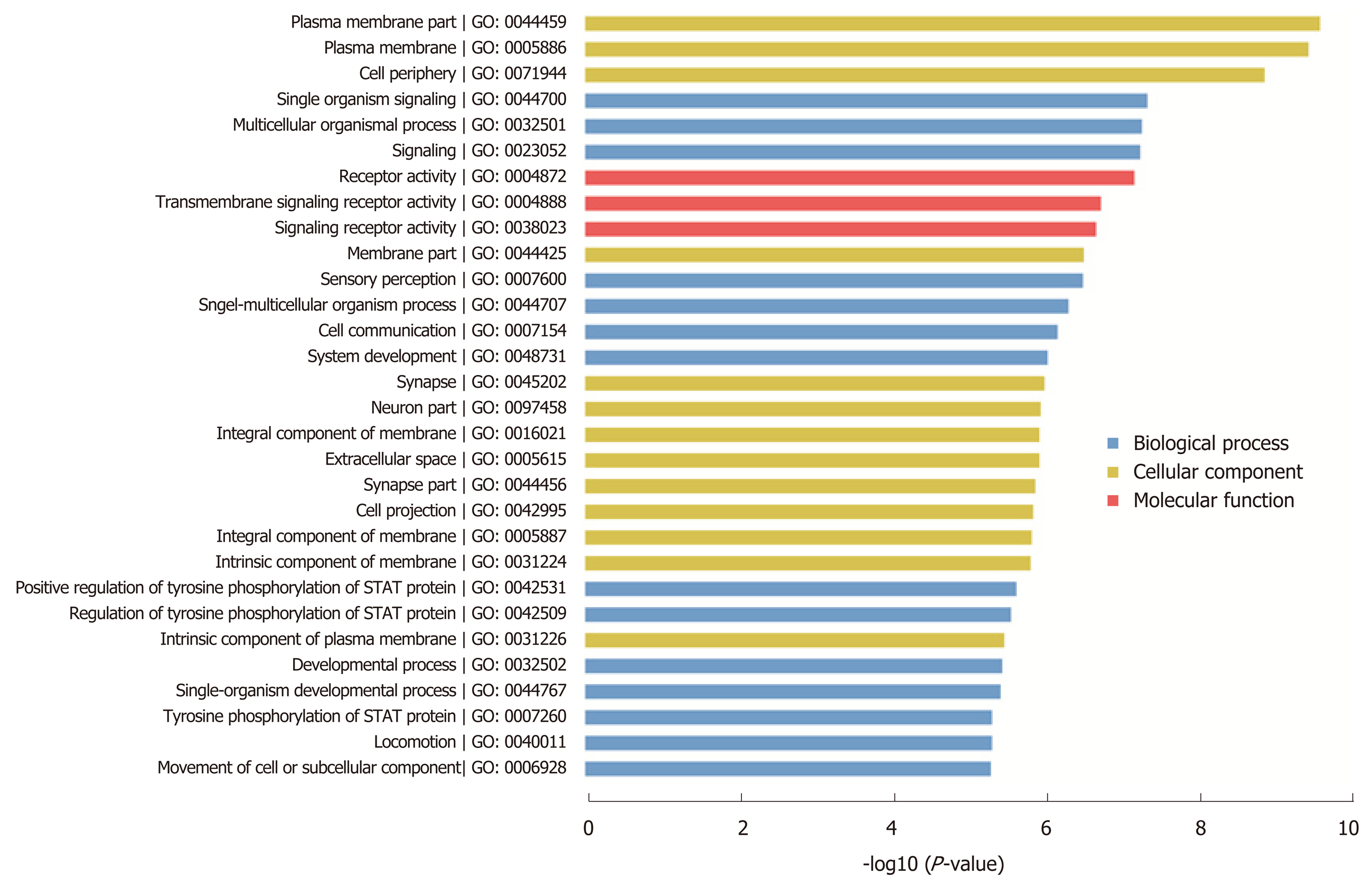 Figure 3 GO pathway analysis of the target genes of miR-205.

Figure 4 Pathway analysis of the target genes of miR-205.
APC is down-regulated in pancreatic cancer 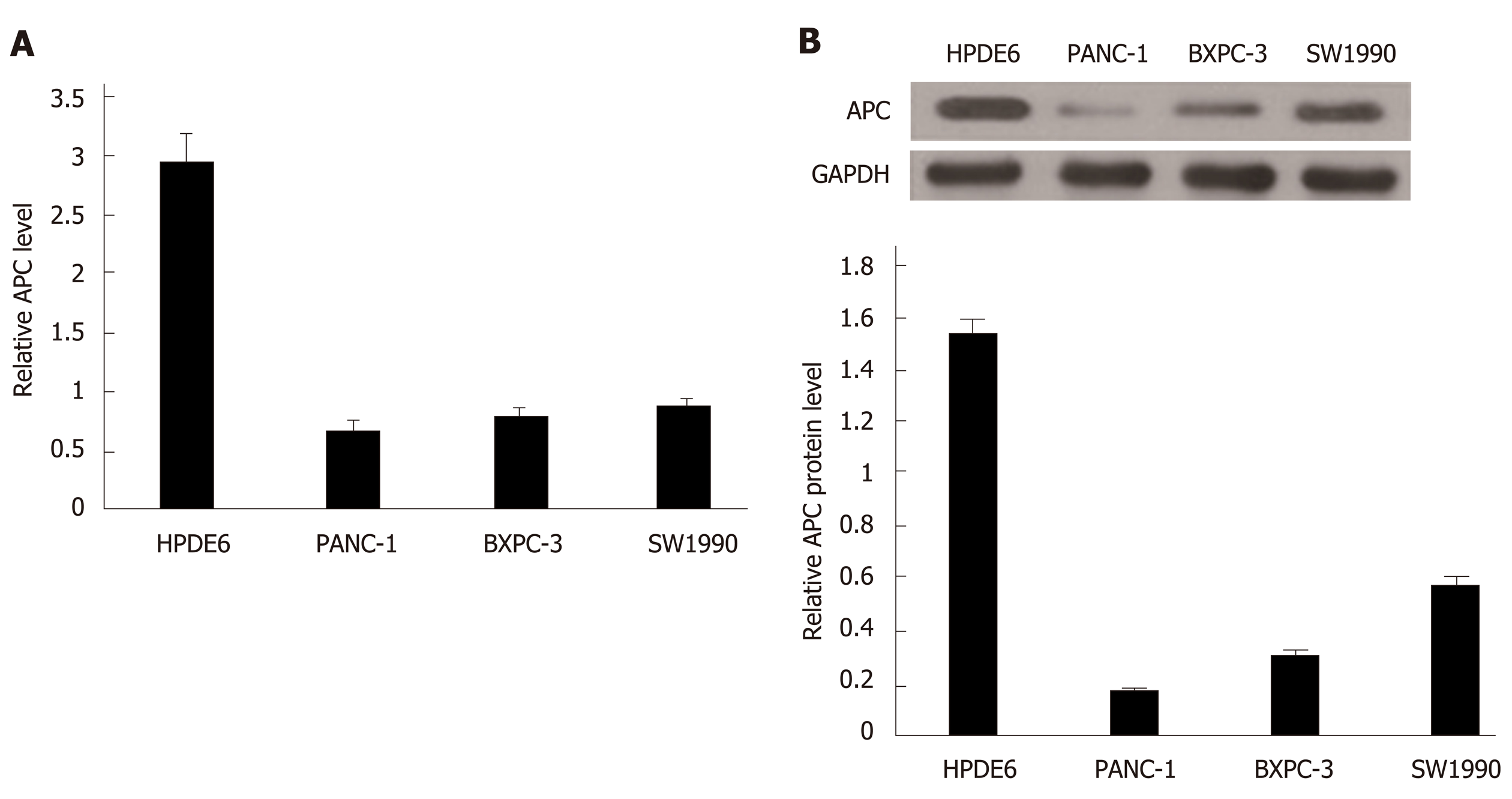 To confirm that APC is a target of miR-205, luciferase reporter assay was performed. The 3’-UTR of APC wild-type or mutant was cloned, as shown in Figure 6A. The results indicated that miR-205 mimic could dramatically decrease the luciferase activity of wild-type vector, but had no effect on the mutant (Figure 6B) in PANC-1 cells. Furthermore, we found that APC mRNA level in miR-205 mimic treated PANC-1 was decreased while an opposite result was observed in miR-205 inhibitor treated cells (Figure 6C). Since APC protein was reported to participate in the development of pancreatic cancer, MTT assay was then carried out in APC overexpressing PANC-1 cells, and the results demonstrated that the promoting effect of miR-205 on pancreatic cancer cell proliferation was reduced (Figure 6D and E). These results indicated that miR-205 directly inhibits APC expression by binding to its 3’-UTR in pancreatic cancer cells. Moreover, miR-205 promotes the proliferation of pancreatic cancer cells by targeting APC. 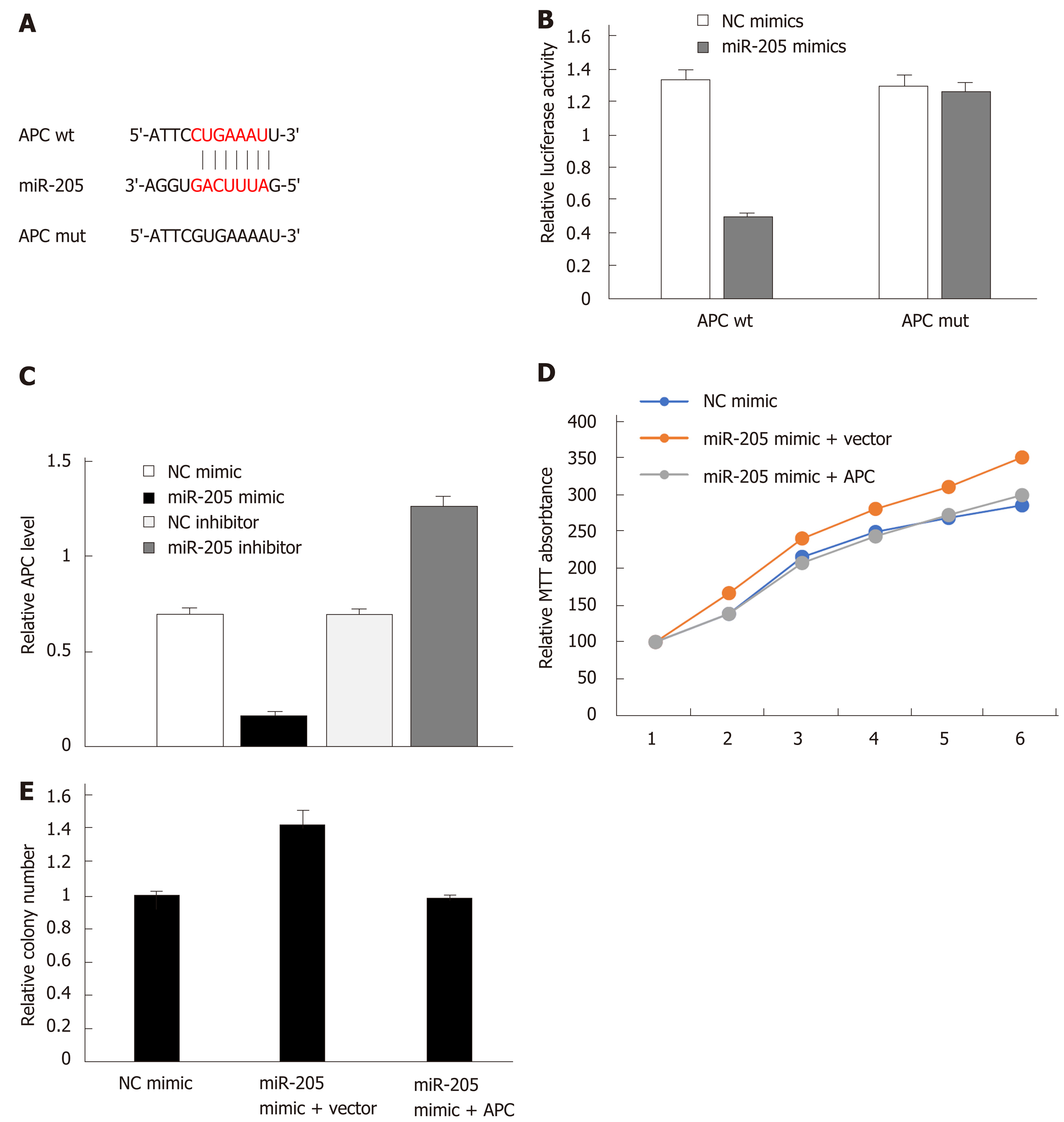 Pancreatic cancer, an aggressive malignancy with a five-year survival rate of less than 5%[2], is a multi-genic disease that develops in a stepwise manner. The treatment of pancreatic cancer is often very difficult due to the impact of drug resistance and metastasis[1]. MiRNAs are a group of small, non-coding RNA molecules, which have been investigated as novel therapeutic targets in cancer[19]. The main mechanism for miRNAs to exert their function is down-regulating the expression or inducing degradation of target genes by binding to the 3’-UTR of target genes in mammals[8,17].

Microarray assay is a convenient and efficient technique to explore the genome-wide gene expression[20]. In this study, 207 miRNAs were found to be abnormally expressed in pancreatic cancer by microarray analysis, including 79 up-regulated and 128 down-regulated miRNAs. These aberrantly expressed miRNAs may provide valuable resources for cancer research. Among these miRNAs, several miRNAs have been studied in previous research. For instance, miR-216 was identified to be down-regulated in pancreatic cancer, which is consistent with previous result[21], and miR-221 was found to promote proliferation and enhance cell cycle progression[22]. MiR-205 was found to play a role in various cancers, including breast cancer and prostate cancer[10,11], but there has been no relevant report in pancreatic cancer. We found that miR-205 showed increased expression in pancreatic cancer and could promote cell proliferation in vitro. The target prediction of miR-205 and functional enrichment analysis of the targets identified the genes involved in various functions and pathways, including cytokine−cytokine receptor interaction, regulation of IFNA signaling, the Wnt signaling pathway, and the TGF-β signaling pathway. Among them, the Wnt signaling pathway was demonstrated to regulate crucial aspects of cell fate determination, cell migration, and organogenesis. A previous study found that mutations cause Wnt pathway activation in human cancers[23]. As one of the miR-205 targets, APC acts as a tumor suppressor protein and participates in transcriptional activation, apoptosis, cell migration, and cell adhesion[12,13]. We confirmed that miR-205 promoted cell proliferation by targeting APC in pancreatic cancer.

Pancreatic cancer is known as a deadly malignancy in the world, and a sufficient treatment for the disease has not been found yet. We aimed to explore the regulatory mechanisms of microRNAs (miRNAs) in pancreatic cancer.

As a group of non-coding RNAs, miRNAs were found to paly important roles in human disease. In this study, we aimed to explore the miRNAs involved in pancreatic cancer and potential regulatory mechanisms of miR-205, which may contribute to pancreatic cancer treatment.

MiRNA expression pattern in pancreatic cancer and potential regulatory mechanisms of miR-205 and adenomatous polyposis coli (APC) were analyzed. The findings may contribute to clinical care of pancreatic cancer.

Microarray analysis was used to explore the genome-wide miRNA expression profile in pancreatic cancer. QRT-PCR and Western blot were performed to validate gene expression. Bioinformatics analysis was performed to predict target genes and their potential functions. Dual luciferase reporter assay was used to validate the binding of miR-205 and APC. Proliferation was evaluated by MTT and colony formation assays.