To investigate the feasibility and safety of secondary endoscopic submucosal dissection (ESD) for residual or locally recurrent gastric tumors.

Secondary ESD of residual or locally recurrent gastric tumors appears to be a feasible and curative treatment though it requires greater technical efficiency and longer procedure time.

Endoscopic submucosal dissection (ESD) technique has evolved, and various lesions can now be treated with ESD, regardless of their size and site, including ulcer scars with severe fibrosis[1,2]. To achieve curative resection, it is very important to accurately predict the margin of neoplasm before ESD. Therefore, chromoendoscopy, magnifying endoscopy, and magnifying image-enhanced endoscopy are widely used to determine the appropriate lesion margin[3,4]. However, despite these efforts, the positive lateral margins of a neoplasm can still occur after ESD. According to the Japanese gastric cancer treatment guidelines, surgical resection should be performed after non-curative resection of early gastric cancer[5]. However, for patients with differentiated carcinoma in which the positive lateral margin is the only non-curative factor, secondary ESD can be performed given the low risk of lymph node metastasis in such cases.

Primary ESD is a relatively established technique that dissects along the loose submucosal layer. However, secondary ESD is difficult because the submucosal layer is eliminated by the previous endoscopic resection and is replaced with fibrosis. In patients who have positive lateral margin after primary ESD, early secondary ESD is performed within a few days. This can be technically difficult because the orientation of the residual lesion might be confusing and development of submucosal fibrosis may have begun[6]. Late secondary ESD is performed a few months after the primary ESD and is also technically demanding because of severe submucosal fibrosis. Until recently, there have only been a few reports of secondary ESD for residual or locally recurrent tumors[6-8]. Therefore, this study aimed to investigate the feasibility and safety of secondary ESD procedures for residual or locally recurrent gastric neoplasms.

Between January 2010 and February 2017, 1623 consecutive patients underwent gastric ESD for gastric neoplasms at Gangnam Severance Hospital in Seoul, Korea. Among these, 28 patients received secondary ESD for residual or locally recurrent tumors. We compared clinicopathologic factors between secondary ESD (28 patients) and primary ESD (1595 patients). The prospectively collected database of ESD and medical records were then reviewed and analyzed retrospectively to determine the feasibility and safety of ESD for residual or locally recurrent tumors. The Institutional Review Board (IRB) of Gangnam Severance Hospitals approved this study.

In this study, secondary ESD refers to an additional ESD procedure for residual or locally recurrent tumors. Early salvage ESD was performed immediately after histological confirmation of positive lateral margins of the initial ESD specimen (Figure 1). Late salvage ESD was prescribed when the positive lateral margin was histologically confirmed after the initial ESD, and was performed after complete healing of the artificial ulcer caused by the initial ESD (Figure 2). Late secondary ESD was performed when local recurrence was proven histologically during the follow-up period after initially curative primary ESD (Figure 3). The general sequence of early or late salvage and late secondary ESD were similar to that of the primary ESD. However, sodium hyaluronate (LG Life Science Co., Seoul, South Korea) was frequently used as a submucosal injection material to overcome non-lifting signs induced by ulceration and fibrosis of the submucosal layer caused by the primary ESD[9]. In general, a non-insulated knife was used for dissecting fibrotic areas that were not lifted due to fibrosis. Additionally, to achieve an appropriate angle for a dissecting view of the submucosa in fibrotic area, the submucosal dissection was initiated in a non-fibrotic area of sufficient distance from the fibrotic area.

Figure 2 Case of late salvage endoscopic submucosal dissection. A 52 year old male patient was diagnosed with a 3 cm early gastric cancer on the posterior wall of the lower body. The primary ESD procedure was performed, and piecemeal resection was done incompletely due to severe bleeding and adhesion. Late salvage ESD was performed after complete healing of the artificial ulcer caused by the primary ESD. ESD: Endoscopic submucosal dissection. 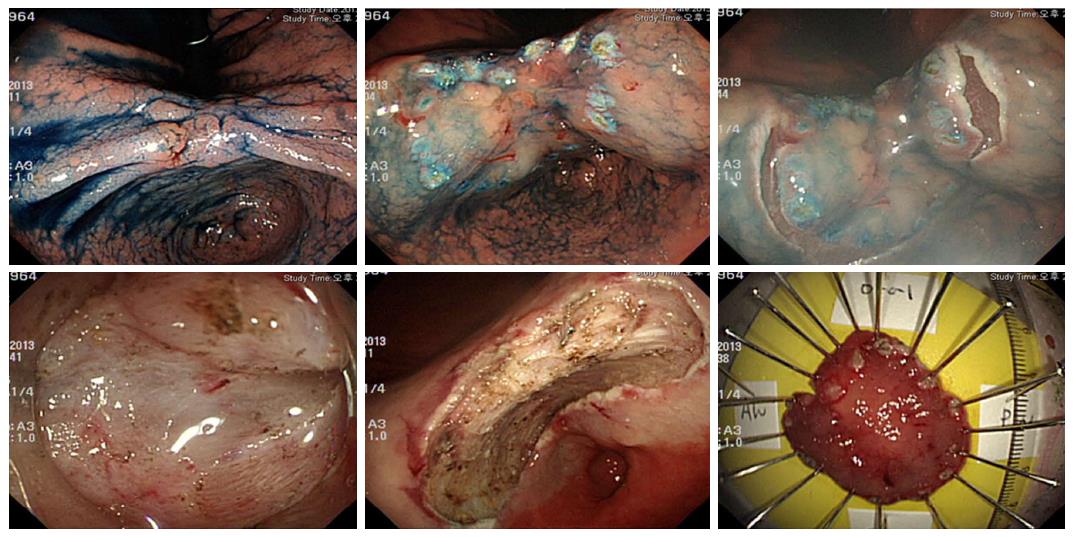 Subgroup analysis according to surgical strategy

Secondary ESD is technically difficult due to the severe fibrosis and scar formation that results from primary ESD[25]. In this study, the mean procedure time and dissection time of secondary ESD was longer than that for primary ESD. In addition, the dissection speed was lower in the secondary ESD group than in the primary ESD group, while the adverse events rate of secondary ESD was slightly higher than that of primary ESD. That is, secondary ESD is associated with a greater technical difficulty, longer procedure time, and increased incidence of adverse events. However, in this study, bleeding after secondary ESD was managed endoscopically, without the need for further emergent operation; aspiration pneumonia was treated with antibiotics and conservative care. The aspiration pneumonia occurred in 15 (0.9%) patients. The procedure time was longer in patients with aspiration pneumonia than others (83.3 min vs 55.1 min, P = 0.125). However, the difference was not statistically significant. Although many endoscopists worry that submucosal fibrosis might cause perforation, in this study, there were no perforations reported in the secondary ESD group. We suspected that deep excavation by benign peptic ulcers would not preserve the muscle layer. However, the artificial ulcer caused by ESD was contracted, preserving the muscle layer, which was thicker than before ESD. Therefore, this observation may explain the rarity of perforation. Primary ESD procedures in this study were performed by one of five ESD endoscopists. Two of them were fully skilled experts (YYH, far more than a thousand cases of ESD experience; KJH, more than five hundreds cases of ESD experience) and the other three were less-skilled ESD endoscopists whose ESD experience were less than a hundred cases. However, secondary ESD in this study was exclusively performed only by the two fully skilled ESD experts (YYH and KJH). That might be a reason why the outcomes of the secondary ESD group were relatively good despite the technical difficulty.

ESD has multiple advantages compared to other treatment options for residual or locally recurrent tumors, such as gastrectomy and additional endoscopic treatment. Compared to gastrectomy, ESD offers improved quality of life, decreased morbidity, longer length of recovery, and lower healthcare costs. It also has advantages over other endoscopic treatments, such as argon plasma coagulation, including a high chance of en bloc resection, which allows for complete histologic assessment. Therefore, the application of secondary ESD for residual or locally recurrent tumors is an important treatment consideration.

According to this study, secondary ESD for residual or locally recurrent tumors is a safe, minimally invasive, and effective treatment. However, secondary ESD should be performed by an experienced endoscopist with precautions, including the appropriate electrosurgical knife, the appropriate dissection depth, and the careful gradual dissection of the severe fibrotic tissue along the plane of the deep submucosa or superficial proper muscle. Furthermore, the surrounding non-fibrotic tissue should first be dissected sufficiently to make a flap of the specimen and directly visualize the plane of the submucosa from the non-lifting fibrotic area to the fibrotic area[27,28]. Therefore, in this study, we found that the specimen size of the secondary ESD group was significantly larger than the primary ESD group. In addition, one recommendation for dissecting the fibrotic area is to dissect deeply along the surface of the muscle fiber because the ESD ulcer scar has an intact muscle layer.

In previous reports, the curative resection rate for residual gastric neoplasms was 92% to 100%[6,26,30] and curative resection rate for locally recurrent gastric neoplasms was 76% (35/46) to 87% (13/15)[26,28]. In this study, the en bloc and curative resection rates of secondary ESD were 92.9% and 89.3%, respectively, which were comparable with those reported previously for secondary ESD. Two patients in the early salvage ESD group had no residual tumor. Although, they showed histological confirmation of positive lateral margins of the initial ESD specimen, no residual lesion was detected due to burning effects on the tissue by electrosurgical unit.

Early and late salvage ESD, which were both performed after histological confirmation of positive lateral margins of the primary ESD specimen, did not involve en bloc resection of the primary lesion. Therefore, the risks of local recurrence and lymph node metastasis resulting from piecemeal resection were always taken into consideration. Hence, careful surveillance after early and late salvage ESD is also very important. In this study, there was no local recurrence during the mean follow-up period in any patient who received secondary ESD.

Although this study was retrospective with a small number of patients, this is the first study to report the feasibility and safety of secondary ESD according to the timing of ESD.

In conclusion, we found that secondary ESD appears to be a feasible and curative treatment. When we consider the morbidity of gastrectomy, secondary ESD of residual or locally recurrent gastric neoplasms is a good therapeutic option worth pursuing, although the procedure time is longer and associated with higher technical difficulty.

Endoscopic submucosal dissection (ESD) is an accepted curative treatment option for gastric tumors with very low local recurrence. However, residual or locally recurrent tumors occur rarely after ESD. Although secondary ESD is technically demanding, it can be applied to residual or recurrent tumors with scar and dense fibrotic submucosa. We investigated the feasibility and safety of secondary ESD for gastric tumors. We also categorized secondary ESD into three groups according to the surgical strategy (early salvage, late salvage, or late secondary ESD) and analyzed them.

There is no consensus on the timing of salvage ESD. Until now, there were few reports about the feasibility and effectiveness of early salvage ESD.

To investigate the feasibility and safety of secondary ESD for residual or locally recurrent gastric tumors.

Although it requires greater technical efficiency and longer procedure time, secondary ESD of residual or locally recurrent gastric tumors appears to be feasible and curative treatment.

Secondary ESD of residual or locally recurrent gastric tumors is a feasible and curative treatment.