Acquired amegakaryocytic thrombocytopenia (AAMT) is one of the causes of severe thrombocytopenia and is characterized by a marked reduction in the number of megakaryocytes, with preserved hematopoiesis of the other lineages in the bone marrow[3]. The exact mechanisms of AAMT have not been fully elucidated. However, the defect of TPO receptor (c-Mpl) expression due to c-Mpl gene mutation is the major cause of congenital amegakaryocytic thrombocytopenia[4]. Furthermore, patients with systemic lupus erythematosus (SLE) and systemic sclerosis who have autoantibodies to c-Mpl develop AAMT[5,6]. TPO, produced mainly by hepatocytes, binds to c-Mpl on hematopoietic stem cells and megakaryocytes, and promotes all stages of platelet production, from the proliferation and differentiation of megakaryocytes to megakaryocytic maturation and platelet formation[1]. Thus, autoantibodies to c-Mpl may be one of the causes of AAMT, through inhibiting TPO function. AAMT with autoantibodies to c-Mpl has not previously been reported in patients with hepatitis C virus (HCV) infection.

Here, we report the first case of a patient with HCV infection and idiopathic thrombocytopenic purpura (ITP), who later developed AAMT with autoantibodies to c-Mpl.

A 64-year-old woman was admitted with the chief complaint of dyspnea. She had a past history of post-transfusion hepatitis approximately forty years beforehand, and subsequently she was diagnosed with HCV infection (genotype 1b, high). At the age of 41, she developed thrombocytopenia (platelets count: 12.2 × 104/μL). At that time, she received interferon therapy, but the HCV infection persisted. At the age of 51 and 52, liver biopsy and bone marrow aspirations were performed, respectively. Liver biopsy specimens revealed periportal mild inflammatory cell infiltration and fibrosis (Modified Histological Activity Index: activity was 5/18, fibrosis was 1/6; Figure 1A and B). The clot section of the bone marrow aspirate showed no significant change, and the number of megakaryocytes was within the normal range. Although the platelet-associated IgG (PA IgG) was not measured, she was diagnosed with ITP (Figure 1C). At the age of 61, liver cancer was detected, using computed tomography and magnetic resonance imaging, and she received transcatheter arterial chemoembolization (TACE) on several occasions. On the most recent admission, her liver cancer was found to be enlarged and ascites and pleural effusion had increased. Laboratory data are shown in Table 1. Her laboratory data indicated hepatic dysfunction, remnants of liver cancer and thrombocytopenia. On day 15 of her admission, her general condition deteriorated, and she died of liver failure. An autopsy was performed. 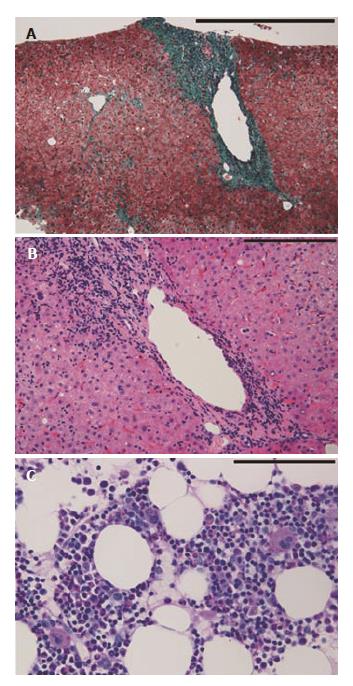 At autopsy, she showed generalized jaundice and purpura in the anterior chest wall. Ascites (2600 mL) and pleural effusion (left: 100 mL, right: 3400 mL) were observed. Liver weight was 660 g, indicating severe atrophy. The cut surface of the liver showed diffuse micronodular cirrhosis with a dark green nodule (15 mm × 15 mm) in the left lobe, and a yellow, partly reddish or green, lesion with an irregular margin (70 mm × 50 mm) in the right lobe (Figure 2A). Spleen weight was 240 g, indicating mild enlargement. Varicose veins were observed in the lower esophagus, stomach, and rectum. 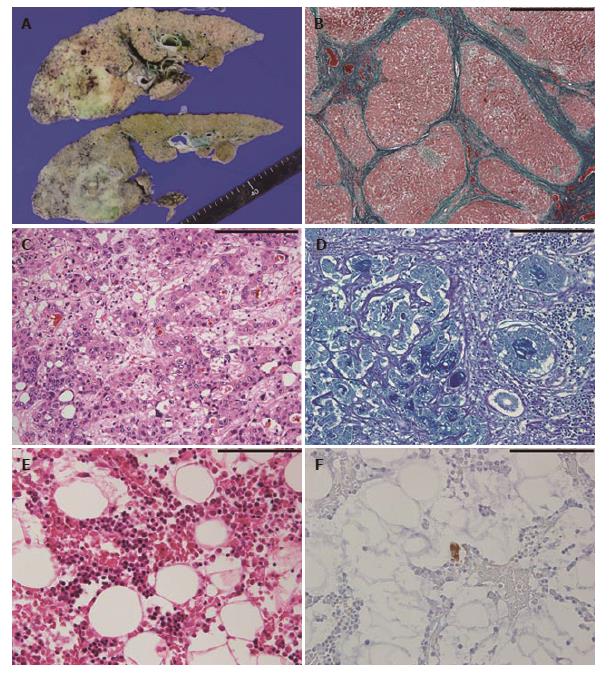 Histopathologically, liver specimens showed diffuse small regenerative nodules with fibrous septum and septal mild mononuclear cell infiltration (Figure 2B). The right lobe lesion was mainly composed of two components: hepatocellular carcinoma with bile production (Figure 2C) and adenocarcinoma with mucin production (Figure 2D). Therefore, the diagnosis of combined hepatocellular-cholangiocarcinoma was made. There were no viable tumor cells in the left lobe lesion, compatible following TACE treatment for liver carcinoma. Microscopic metastases were observed in both lungs. Bone marrow specimens showed slight hypocellularity (30%-40%), with a myeloid to erythroid ratio: 3 to 1, and a marked reduction in the number of megakaryocytes, < 1 megakaryocyte/10 high-power fields (Figure 2E). Immunostaining for CD41 revealed scattered small megakaryocytes (Figure 2F). Other lineages of hematopoietic cells were preserved, and myelofibrosis, dysplasia, and metastatic lesions were not observed. Spleen specimens showed mild congestion without extramedullary hematopoiesis. Characteristic histopathological findings of the spleen in patients with ITP, such as an increase of secondary follicles with well-delineated germinal centers, an expansion of a follicular marginal zone of the white pulp and a diffuse proliferation of foamy histiocytes, were not obvious in this patient. There was no definite lesion in the thyroid.

Figure 3 A schema of the pathogenesis of the current case. Hepatitis C virus infection may cause the generation of anti-c-Mpl antibodies (1). At first, most of the generated antibodies would be absorbed with the c-Mpl on platelets because platelets are the largest component in the megakaryocyte lineage (2). These antibody-attached platelets are destroyed in the spleen (3), therefore, idiopathic thrombocytopenic purpura (ITP)-like clinical manifestations are observed (Early stage). Following a sufficient reduction of platelets, these antibodies begin to bind to the c-Mpl on the megakaryocytes and its progenitor cells in the bone marrow (4). Attached antibodies block the functions of thrombopoietin, causing inhibition in the development and proliferation of the megakaryocyte lineage (5). Thus, severe reduction of megakaryocytes in the bone marrow occurs, that is, acquired amegakaryocytic thrombocytopenia (AAMT) (Advanced stage).

AAMT with autoantibodies to c-Mpl can be one of the causes of thrombocytopenia in patients with chronic HCV infection.

Liver cirrhosis, combined hepatocellular-cholangiocarcinoma in the liver and microscopic metastases in both lungs, and acquired amegakaryocytic thrombocytopenia (AAMT) in the bone marrow.

There are a limited number of reports describing AAMT with autoantibodies to thrombopoietin receptor (c-Mpl) in patients with systemic lupus erythematosus and systemic sclerosis.

AAMT is characterized by a marked reduction in the number of bone marrow megakaryocytes and occurs, in part, through autoantibodies to c-Mpl.

The case record is correctly described and documented. The authors describe the first case of AAMT associated with HCV infection.