This work aims to facilitate diagnosing Aspergillus appendicitis, which can be missed clinically due to its rarity, by proposing a clinical pentad for Aspergillus appendicitis based on literature review and one new case. The currently reported case of pathologically-proven Aspergillus appendicitis was identified by computerized search of pathology database at William Beaumont Hospital, 1999-2014. Prior cases were identified by computerized literature search. Among 10980 pathology reports of pathologically-proven appendicitis, one case of Aspergillus appendicitis was identified (rate = 0.01%). A young boy with profound neutropenia, recent chemotherapy, and acute myelogenous leukemia presented with right lower quadrant pain, pyrexia, and generalized malaise. Abdominal computed tomography scan showed a thickened appendiceal wall and periappendiceal inflammation, suggesting appendicitis. Emergent laparotomy showed an inflamed, thickened appendix, which was resected. The patient did poorly postoperatively with low-grade-fevers while receiving antibacterial therapy, but rapidly improved after initiating amphotericin therapy. Microscopic examination of a silver stain of the appendectomy specimen revealed fungi with characteristic Aspergillus morphology, findings confirmed by immunohistochemistry. Primary Aspergillus appendicitis is exceptionally rare, with only 3 previously reported cases. All three cases presented with (1)-neutropenia, (2)-recent chemotherapy, (3)-acute leukemia, and (4)-suspected appendicitis; (5)-the two prior cases initially treated with antibacterial therapy, fared poorly before instituting anti-Aspergillus therapy. The current patient satisfied all these five criteria. Based on these four cases, a clinical pentad is proposed for Aspergillus appendicitis: clinically-suspected appendicitis, neutropenia, recent chemotherapy, acute leukemia, and poor clinical response if treated solely by antibacterial/anti-candidial therapy. Patients presenting with this proposed pentad may benefit from testing for Aspergillus infection by silver-stains/immunohistochemistry and considering empirical anti-Aspergillus therapy pending a tissue diagnosis.

Core tip: This work reports the fourth reported case of isolated Aspergillus appendicitis, further characterizes this syndrome, and identifies a clinical pentad associated with this syndrome: clinically-suspected appendicitis, neutropenia, recent chemotherapy, acute leukemia, and poor clinical course if treated solely with antibacterial or anti-Candidial antibiotics. These risk factors are biologically reasonable. Immunosuppression from neutropenia and acute leukemia may promote Aspergillus appendicitis. Local gastrointestinal ulcers from recent chemotherapy provides a nidus for fungal colonization. In patients presenting with this proposed pentad, Aspergillus appendicitis should be considered in the differential diagnosis, special silver stains should be performed to evaluate for this infection, and empiric anti-Aspergillus therapy may be considered pending tissue diagnosis.

The diagnosis of isolated (primary) Aspergillus appendicitis may be clinically overlooked or delayed because of its exceptional rarity, as shown by a review of the English literature revealing only three cases, and its association with profound immunosuppression (Table 1)[1-3] that can delay or mask the usual clinical features of appendicitis[4,5]. Yet, delayed diagnosis and therapy for Aspergillus appendicitis may have dire patient consequences, as occurred in two of the three previously reported cases[1,2]. A new patient is reported of isolated Aspergillus appendicitis who presented with five striking clinical findings, and a novel syndromic pentad is proposed as a diagnostic tool, based on this new case report and review of the three previously reported cases that demonstrated nearly identical findings. 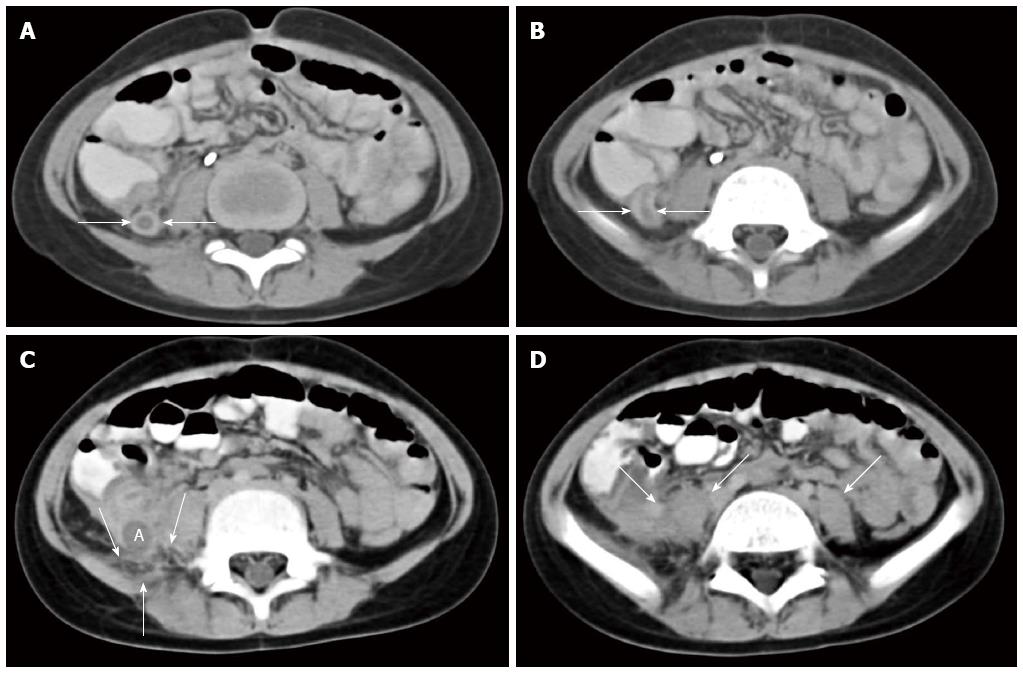 Figure 1 Computed tomography images. Computed tomography images of abdomen using IV non-ionic contrast and standard oral contrast demonstrates dilated appendiceal ostium and thickened appendiceal wall in cross-section (arrows in A); dilated lumen and thickened wall of vermiform appendix in longitudinal section (arrows in B); periappendiceal fat stranding (arrows in C) and an enlarged right psoas muscle with indistinct margins from local extension of the appendiceal inflammation (enlarged right psoas muscle with indistinct margins identified in D by 2 arrows, as compared to normal-sized left psoas muscle with distinct margins identified by 1 arrow). The appendix measures approximately 11 mm in diameter from outer wall to outer wall. All these findings are consistent with acute appendicitis. There is no evident appendicolith or typhlitis.

Emergency laparotomy revealed an inflamed, edematous, dusky appendix without appendiceal perforation but with thickened periappendiceal mesentery. The appendix was resected. Microscopic examination of hematoxylin and eosin stains of histologic sections of the resected appendix showed an acute necrotizing appendicitis, with scattered questionable fungal hyphal forms. Postoperatively, the patient continued to be ill with persistent moderate pyrexia for 12 d, while receiving IV ampicillin, gentamicin, and metronidazole antibiotic therapy and filgrastim (granulocyte colony stimulating factor). Due to this poor clinical response, evident risk factors for fungal appendicitis, and questionable findings of fungal hyphae on a conventional hematologic stain, a Grocott-Gomori methenamine-silver nitrate stain was performed on the resected specimen which revealed numerous fungal hyphae that showed features characteristic of Aspergillus of septation and acutely angled branching, and which was confirmed as Aspergillus by immunohistochemistry (Figure 2A and B). The specific species causing the Aspergillus infection could not be determined in the formalin fixed tissue. On day 13 IV amphotericin-B was added to the antibiotic regimen and the patient rapidly improved clinically, with defervescence and gradual recovery of the leukocyte count to 3400 cells/mm3. He was discharged after 21 d of IV amphotericin therapy to receive oral itraconazole as an outpatient. During 8 mo of follow up, the patient had 2 relapses of AML, but no evident Aspergillus recurrence, while continuing oral antifungal prophylaxis with itraconazole.

Aspergillus, a widespread fungus in the environment, usually enters the human body by airborne transmission and colonizes the nasal cavities or facial sinuses. Invasive pulmonary aspergillosis accounts for 90%-98% of invasive Aspergillus infections, but hematogenous spread may cause disseminated infection[8-12], or rarely isolated infections of other organs, including central nervous system, heart, liver, kidneys, and gastrointestinal (GI) tract[13-17]. Based on a literature review of more than 3000 cases of Aspergillus infection, Denning et al hypothesized that isolated GI aspergillosis generally arises from ingestion of food contaminated with Aspergillus, and colonization by Aspergillus of GI ulcers which can arise from antecedent chemotherapy[10,18].

Aspergillus fumigatus is the most frequent species that causes human infections, followed by A. flavus, A. terreus, A. niger, and A. nidulans[19]. The risk of pulmonary infection and hematogenous spread greatly increases with immunosuppression, including profound neutropenia, glucocorticoid therapy, and neutrophilic or phagocytic dysfunction from acute leukemia[20,21], chronic granulomatous disease, and advanced human immunodeficiency virus infection[7,22-24].

All four analyzed cases, including the current case, presented with a distinct syndrome of clinically-suspected appendicitis, acute leukemia [either AML or acute lymphocytic leukemia (ALL)], recently administered chemotherapy, and neutropenia (Table 1)[1-3]; and three of the patients, including the current case, initially did poorly when receiving antibacterial therapy without anti-Aspergillus therapy[1,2]. The fourth case received anti-Aspergillus therapy promptly without delay. Four other cases of appendiceal aspergillosis were reported with other GI involvement, but without clinically apparent extraintestinal spread (Table 2)[26-29], of which one had disseminated aspergillosis demonstrated by autopsy[29]. All four of these cases, like the four cases of isolated Aspergillus appendicitis, had underlying AML or ALL, neutropenia, and recent chemotherapy.

To promote early diagnosis and appropriate treatment, a clinical pentad is proposed for suspected Aspergillus appendicitis of: (1) clinically-suspected appendicitis; (2) neutropenia; (3) recent chemotherapy; (4) underlying acute leukemia; and (5) poor response if administered antibacterial antibiotics or anti-Candidial therapy without anti-Aspergillus therapy. The hypothesized pathophysiology of the proposed syndromic pentad is Aspergillus, presumably ingested in contaminated food (1) colonizes GI ulcers or areas of mucositis induced by chemotherapy. Mucosal ulcers commonly occur after chemotherapy with daunorubicine, which was administered in 3 of the 4 reported cases[2,3,current report], or after chemotherapy with cytarabine[30], which was administered in 2 of the 4 reported cases[3,current report], (fourth patient received unspecified chemotherapy[1]). Aspergillus then invades the appendiceal wall due to immunosuppression from (2) neutropenia and (3) acute leukemia[31]. The patients, despite immunosuppression, still present clinically (4) with RLQ pain and fever suggestive of appendicitis; and (5) the patients with Aspergillus infection should not respond to conventional antibacterial or anti-Candidial antibiotics.

The proposed pentad is subject to criticism. First, the data are limited to four cases of isolated Aspergillus appendicitis and four cases of Aspergillus appendicitis with other GI involvement, and therefore require further confirmation. However, all four case reports generally satisfied the proposed pentad. Second, the reviewed cases may lack clinical details because of their retrospective nature. Third, cases obtained from the literature, particularly individual case reports, are subject to reporting bias. For example, clinicians might selectively report and journal editors might selectively publish only dramatic cases of poor response to antibacterial therapy and rapid recovery after instituting anti-Aspergillus therapy. Fourth, although the proposed syndromic pentad may be highly sensitive for Aspergillus appendicitis, the specificity is unstudied and might only be moderate. The differential diagnosis in patients satisfying this pentad also includes (bacterial) neutropenic typhlitis, with or without bacterial appendicitis[36,37], and appendicitis caused by other fungi[38], including Candida[29], Mucor[39], and Histoplasma[40,41]. Therefore, this pentad should not be viewed as diagnostic, but merely as clinically useful to raise a suspicion of potential Aspergillus appendicitis. All five criteria appear to be typical for Aspergillus appendicitis, but the first four criteria may also occur with (bacterial) neutropenic typhlitis/enterocolitis and only the fifth criterion of poor response to conventional antibacterial/anti-Candidial antibiotic therapy is relatively specific for Aspergillus appendicitis.

This clinical pentad may become increasingly important clinically because of an increasing incidence of invasive Aspergillus[42], and an increasing incidence of severe neutropenia from more potent immunosuppressive chemotherapy and more frequent stem cell transplantation[14]. It is important to recognize neutropenic patients with invasive Aspergillus because they may fare poorly with solely antibacterial or anti-Candidial therapy (e.g., fluconazole) without specific anti-Aspergillus therapy (e.g., voriconazole or amphotericin). Addition of another factor to the pentad of persistently positive galactomannan antigenemia in patients with suspected appendicitis might be useful diagnostically but is not warranted at this point because of a lack of data on the galactomannan antigen status in the reported cases of appendiceal aspergillosis[43].

An 8-year-old boy with acute myelogenous leukemia, diagnosed one month earlier, and with profound neutropenia, after receiving two cycles of IV chemotherapy with daunorubicin, cytarabine, thioguanine, etoposide and dexamethasone, presented with low-grade pyrexia and chills for one day.

Clinical presentation is an episode of febrile neutropenia. The differential diagnosis includes neutropenic typhlitis and/or appendicitis, due to local opportunistic infections including bacterial infections, Candida, Mucor, Histoplasma, or Aspergillus.

Microscopic examination of hematoxylin and eosin stains of histologic sections of the resected appendix showed an acute necrotizing appendicitis, with scattered questionable fungal hyphal forms. A Grocott-Gomori methenamine-silver nitrate stain performed on the resected specimen revealed numerous fungal hyphae that showed features characteristic of Aspergillus of septation and acutely angled branching, and which was confirmed as Aspergillus by immunohistochemistry.

The patient underwent appendectomy for the appendicitis and was administered IV filgrastim (granulocyte colony stimulating factor) for the profound neutropenia. On postoperative day 13 IV amphotericin-B therapy was added when Aspergillus appendicitis was identified by special stains performed on the resected appendix.

Review of the modern literature revealed only 3 other reported cases of isolated Aspergillus appendicitis, aside from one case very briefly reported in German in 1959.

Analysis of the current case and review of the three prior case reported in the modern literature suggest that patients with Aspergillus appendicitis may clinically present with a pentad of: clinically-suspected appendicitis, neutropenia, recent chemotherapy, acute leukemia, and poor clinical response if treated solely by antibacterial/anti-candidial therapy.