CONCLUSION: This study provides new evidence for the protective effects of NAC treatment on hepatocytes during IRI. Through inhibition of ROS-mediated ER stress, NAC may be critical to inhibit the ER-stress-related apoptosis pathway.

Core tip: The protective effect of N-acetylcysteine (NAC) treatment has been confirmed in IRI; however, its underlying mechanism remains unclear. Our previous data showed that endoplasmic reticulum (ER) stress is critical for the development of liver IRI. We have found new evidence for the protective effects of NAC on hepatocytes during liver IRI. Our data demonstrated that NAC modulates ER stress signaling and reduces ER-stress-mediated apoptosis during liver IRI. These findings provide further support for the usefulness of exploring NAC as a potential alternative drug for treating liver IRI.

Ischemia reperfusion injury (IRI) is an important inducing factor in liver damage and failure in various clinical settings, such as hepatic trauma, resection, liver transplantation and circulatory shock[1-4]. ER stress mediates liver injury during liver IRI[5,6]. ER, as an intracellular organelle, plays a key role in protein synthesis, folding, assembly and transportation. Upset in any balances of the ER causes ER stress. Generally, ER stress can give rise to an unfolded protein response (UPR), which tries to reduce ER stress by inhibiting protein synthesis, increasing chaperones, and decomposing misfolded proteins[7-10]. However, excess or prolonged UPR results in apoptosis as a cytoprotective response in stressed cells[9,10].

N-acetylcysteine (NAC), an antioxidant drug, is an inexpensive and simple water-soluble molecule that has been used as a treatment for congestive and obstructive lung diseases for nearly 50 years. Since the mid-1970s, it has also been used to treat paracetamol intoxication[15]. In addition, it has been used to treat hepatitis and acute liver failure, in which it protects the liver by increasing hepatic glutathione (GSH), which serves as a substrate to inactivate or combine with foreign substances[16,17]. Indeed, NAC has beneficial effects on IRI in the central nervous system, heart, kidney and liver[18-21]. To date, however, no data are available on the effects of NAC on ROS-induced ER stress during IRI. This study was designed to elucidate whether NAC inhibits ROS and ROS-induced ER stress during hepatic IRI.

We used a partial (70%) hepatic ischemia model. Midline laparotomy was performed under 10% chloral hydrate [0.3 g/kg, injected intraperitoneally (ip)] anesthesia in mice. In the IR group, all structures in the portal triad (hepatic artery, portal vein, and bile duct) to the left and median liver lobes were occluded with an atraumatic bulldog clamp for 90 min. The clamp was then removed to allow reperfusion. The abdomen was immediately closed with a continuous 4-0 silk suture. The mice were sacrificed 6 h after reperfusion, and blood, as well as liver tissue samples, were harvested for analysis. In the sham-operated group, mice were given anesthesia and subjected to laparotomy and exposure of the portal triad without hepatic ischemia. In the NAC treatment group, mice were injected ip with 300 mg/kg NAC for 2 h before the operation. NAC was purchased from Sigma-Aldrich (Shanghai, China) and diluted in saline to 3 mg/mL.

Liver specimens were fixed with 10% neutral formaldehyde and embedded in paraffin. The specimens were sectioned at 4 μm and stained with hematoxylin and eosin. The sections were subjected to histopathological analysis by light microscopy. Sections were scored from 0 to 4 for sinusoidal congestion, vacuolization of hepatocyte cytoplasm, and parenchymal necrosis, as described by Suzuki et al[22].

GSH, malondialdehyde (MDA) and caspase-3 activities were assessed in liver tissues. The activities were measured with a GSH, MDA and Caspase-3 assay kit (Jiancheng Biotechnology, Nanjing, China), according to the manufacturer’s instructions. 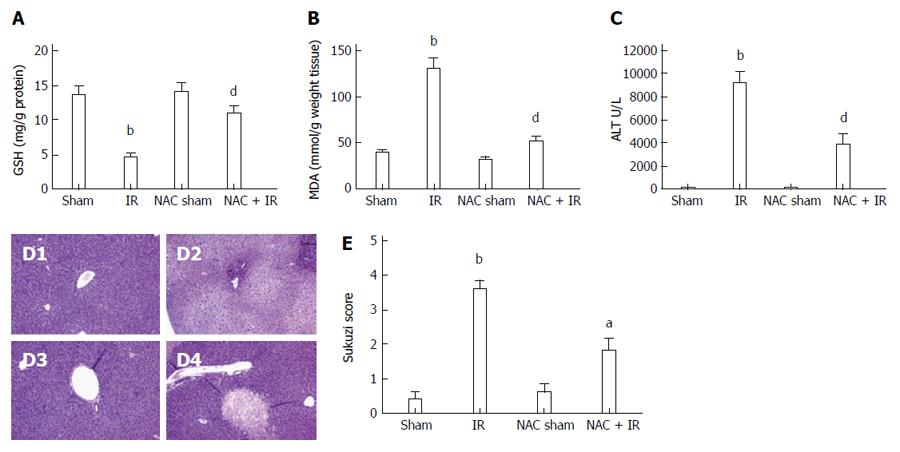 We then assessed whether the inhibitory effect of NAC on IR-induced oxidative stress could reduce hepatocellular damage directly inflicted by ROS during liver IR. Figure 1C shows that NAC treatment significantly attenuated the increase of serum transaminases after reperfusion (9144 ± 1064 U/L and 3783 ± 1017 U/L, respectively, P < 0.05). Liver serum enzyme data were in line with liver pathological analyses. Histological analysis showed distinct areas of necrosis in the IR group, which was significantly improved in the NAC treatment group (Figure 1D). The histological parameters observed in the sham (0.40 ± 0.25), IR (3.6 ± 0.25), NAC sham (0.60 ± 0.30) and NAC IR (1.8 ± 0.37) groups were according to Suzuki et al[22] (Figure 1E). These data indicated that NAC treatment significantly attenuated ROS-induced liver injury after IR.

Following reperfusion, the TUNEL assay assessed hepatocellular apoptosis. TUNEL-positive cells were markedly fewer in the NAC-pretreated IR liver compared with the IR group (Figure 2A). TUNEL-positive cells as a percent of total hepatocytes in the four groups were: Sham 1.5% ± 0.29%, IR 72.0% ± 5.08%, NAC sham 1.75% ± 0.48% and NAC + IR 20.5% ± 4.41%, indicating that hepatocellular apoptosis was significantly inhibited by NAC treatment after reperfusion (Figure 2B). Active caspase-3 directly triggered hepatocellular apoptosis following liver IR and indicated the levels of apoptosis. Figure 2C displays that the level of caspase-3 was significantly inhibited after NAC treatment in ischemic liver compared with the IR control (0.925 ± 0.11 U and 2.35 ± 0.25 U, respectively; P < 0.005). 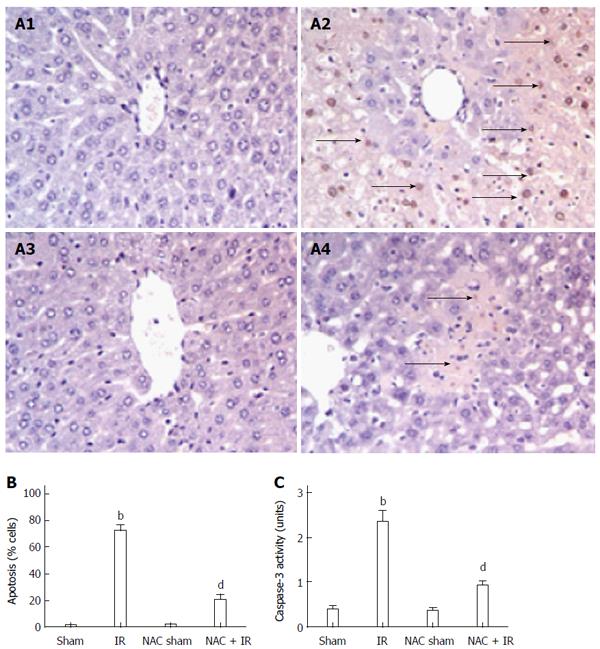 Previous studies have shown that ROS is an important inducer of the ER stress response, which mediates cell death[25-27]. The above data showed that NAC treatment significantly inhibited ROS generation during liver IR. We analyzed whether NAC treatment reduced ER stress responses mediated by ROS during liver IRI. We assessed gene expression and protein levels of ER stress molecules, including GRP78, ATF4 and CHOP. GRP78 is a central regulator of ER homeostasis, because of its multiple functional roles in protein folding, ER calcium binding, and controlling of the activation of transmembrane ER stress sensors. The ATF4-CHOP pathway, downstream of GRP78, is the main apoptotic pathway of ER stress[23]. These molecules are expressed at low levels under physiological conditions, but are induced strongly during severe ER stress. As shown in Figure 3A, GRP78, ATF4 and CHOP gene expressions were significantly elevated in the ischemic liver after reperfusion. These genes were significantly inhibited by NAC treatment after reperfusion. In addition, GRP78, ATF4 and CHOP proteins were further analyzed by western blotting, which agreed with the PCR data (Figure 3B and C). These data indicated that NAC treatment suppressed ROS-mediated ER stress during liver IRI. 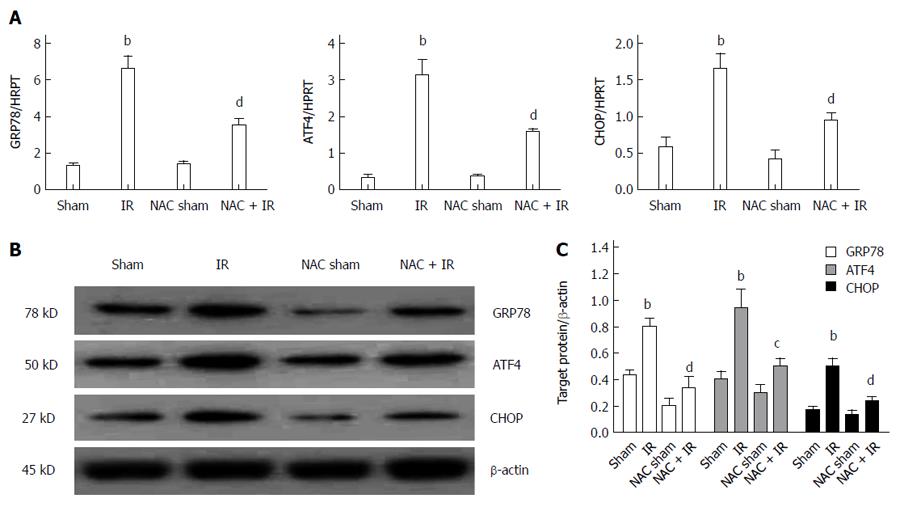 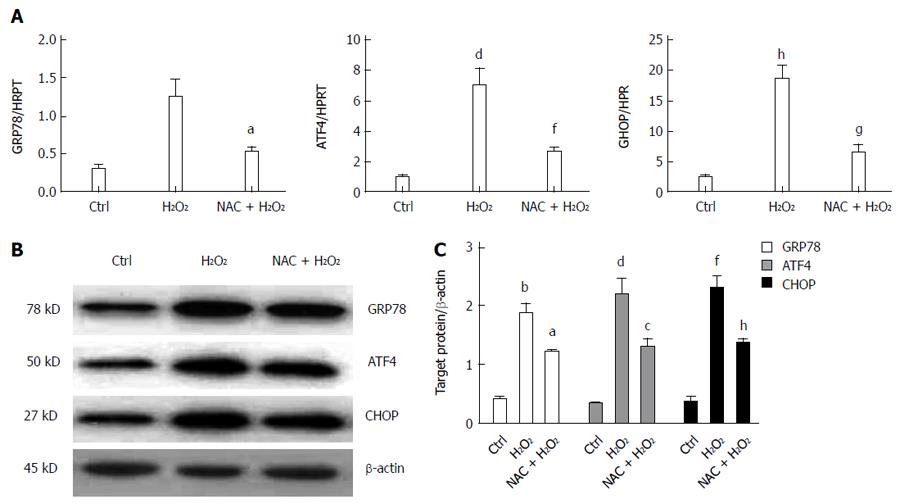 Previous studies have shown that Bcl-2 and other Bcl-2 family members are important molecules during ER-stress-induced apoptosis[28,29]. The present work examined the levels of antiapoptotic Bcl-2 family members Bcl-2 and Bcl-xl by western blotting. Figure 5A shows that liver IR significantly inhibited the levels of Bcl-2 and Bcl-xl, which could be restored by NAC treatment. To assess directly the roles of NAC treatment on ROS-mediated ER stress or ER stress induced cell death, we analyzed the effects of NAC treatment on H2O2- or TG-induced hepatocellular death by LDH in vitro. Figure 5B shows that NAC treatment significantly reduced H2O2-induced (30.71 ± 1.09 U/L and 15.36 ± 1.83 U/L, respectively, P < 0.005) and TG-induced (35.37 ± 3.20 U/L and 15.62 ± 2.41 U/L, respectively, P < 0.005) death in hepatocytes. These data indicated that NAC treatment inhibited ROS or the ER-stress-mediated apoptosis pathway. 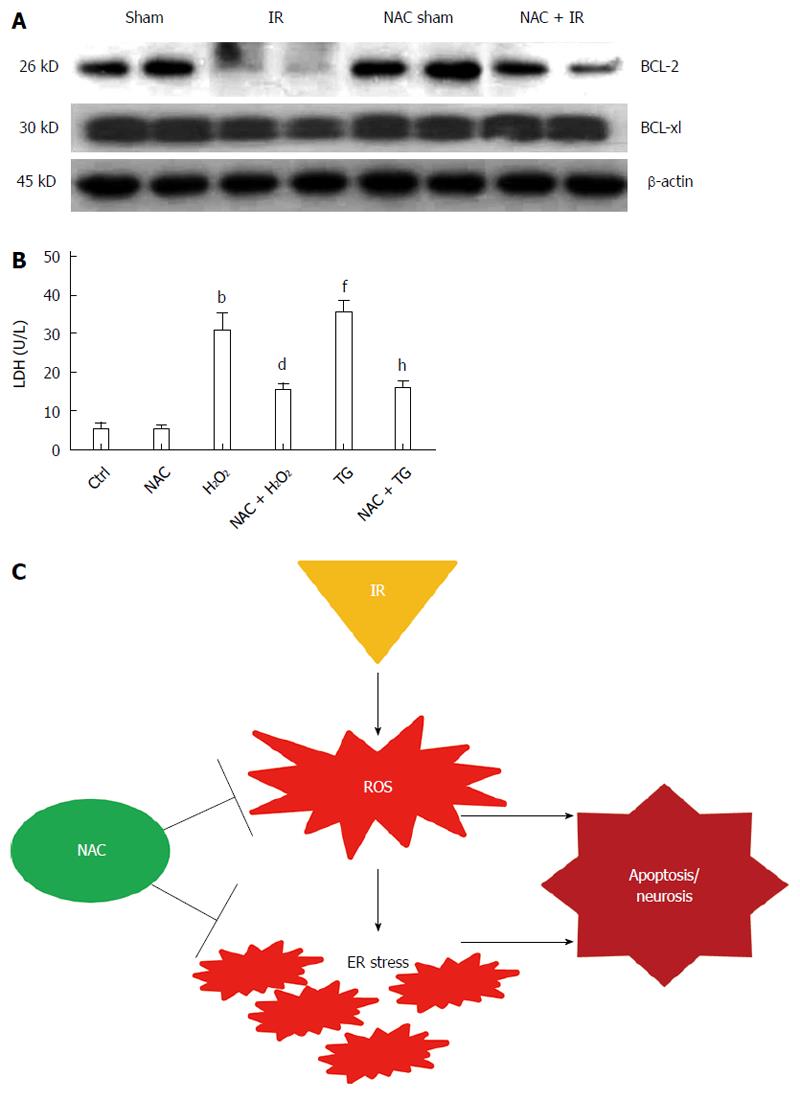 NAC is an antioxidant that provides resistance to tissue injury caused by ROS. It has been reported extensively to have excellent preventive and therapeutic effects on various disorders, including paracetamol intoxication, hepatitis, acute liver failure and IRI[16,21,30,31]. The mechanisms and molecules of NAC treatment in connection with tissue protection have been reported in various diseases. NAC has a number of different pharmacological effects, predominantly based on increased mitochondrial and cytosolic production of GSH, one of the principal free radical scavenging agents in humans[32]. In paracetamol toxicity, GSH repletion reduces the level of covalent binding of the toxic metabolite, making NAC an effective antidote[33]. The Stravitz RT group has shown that NAC treatment improves transplant-free survival in patients with non-paracetamol acute liver failure by ameliorating the production of IL-17[34]. Some recent studies have demonstrated that ROS can trigger ER stress in vivo and in vitro[13,14]. The present study aimed to elucidate whether the ROS-induced ER stress is inhibited by NAC treatment after liver IRI, and if yes, to investigate the effects of ER stress inhibition on apoptosis.

Apoptosis/necrosis plays crucial role in liver IRI and reflect liver tissue damage directly. The present study assessed apoptotic cells in liver sections after IRI and showed that the positive cells were markedly increased in the IR group. In addition, the mean number of positive cells detected in the NAC treatment group was 20.21% of that in the IR group. Caspase-3 levels, which indicate the extent of apoptosis in the liver tissue, were analyzed in ischemic liver tissue after reperfusion. NAC treatment effectively repressed caspase-3 levels upregulation following reperfusion, which was in line with the TUNEL results.

Prolonged and excessive ER stress can cause cell apoptosis or death. LDH activity correlates with cell membrane disruption and is thus regarded as a reliable indicator of cell damage and/or death[42]. In addition, LDH levels have often been used an index to assess hepatocellular death[43]. We measured LDH activity to reflect hepatocyte damage or death. Figure 5A shows that H2O2 treatment significantly increased LDH release, which was significantly inhibited by NAC pretreatment. To investigate further the effects of NAC on ER-stress-induced cell death, TG (an activator of ER stress) was used to treat hepatocytes. The results demonstrated that NAC treatment effectively reduced hepatocellular death induced by TG treatment. UPR activates c-JNK phosphorylation, which has been suggested as a pro-apoptotic link by direct phosphorylation of mitochondrial proteins, including members of the BCL-2 family[12,13,28,29]. Our present findings are consistent with other studies in which IR-induced ER stress inhibited expression of antiapoptotic protein (BCL-2 and BCL-xl) in the liver. Our results also indicate that NAC treatment recovers expression of BCL-2 and BCL-xl during liver IRI.

In conclusion, our research indicates that NAC treatment attenuates the liver injury induced by IR and reinforces the usefulness of exploring NAC as a potential alternative therapeutic drug during liver IRI. The protective effects of NAC not only reflect its confirmed antioxidant effects, but also are caused by regulation of ER stress molecules and prevention of related apoptosis development (Figure 5C). However, the application of our results has some limitations in the clinical setting.

We are grateful to Yuan-Fang Fu at UCLA for revising the English text.

The protective effect of N-acetylcysteine (NAC) treatment has been confirmed during IRI in several organs, but its underlying mechanism remains unclear.

IRI is an important inducing factor in liver damage and failure in various clinical settings, such as hepatic trauma, resection, liver transplantation and circulatory shock. Although many drugs or agents have been evaluated in preventing liver IRI, the outcomes were not satisfactory.

This study revealed new evidence for the protective effects of NAC treatment on hepatocytes during liver IRI. The data demonstrate that protection associated with NAC treatment is not only caused by the confirmed antioxidant effects, but also by regulation of endoplasmic reticulum (ER) stress molecules and inhibition of relative apoptosis during liver IRI.

This study provides evidence further supporting the usefulness of NAC as an alternative therapeutic drug during liver IRI.

The study reports experimental data that highlight the potential use of NAC in the treatment of IRI. The experimental techniques were appropriate, and the authors present their findings in an adequate way.