Right portal vein ligation (PVL) is a safe and widespread procedure to induce controlateral liver hypertrophy for the treatment of bilobar colorectal liver metastases. We report a case of a 60-year-old man treated by both right PVL and ligation of the glissonian branches of segment 4 for colorectal liver metastases surrounding the right and median hepatic veins. After surgery, the patient developed massive hepatic necrosis with secondary pulmonary and renal insufficiency requiring transfer to the intensive care unit. This so-called toxic liver syndrome finally regressed after hemofiltration and positive oxygen therapy. Diagnosis of acute congestion of the ligated lobe was suspected. The mechanism suspected was an increase in arterial inflow secondary to portal vein ligation concomitant with a decrease in venous outflow due to liver metastases encircling the right and median hepatic vein. This is the first documented case of toxic liver syndrome in a non-cirrhotic patient with favorable issue, and a rare complication of PVL.

Portal vein embolization (PVL) was first used by Makuuchi et al[1] to induce liver hypertrophy before major hepatectomy in biliary cancers. The technique was then applied to hepatocellular carcinoma and colorectal liver metastases (CRLM) to decrease postoperative morbidity and mortality[2,3]. PVL and portal vein embolization (PVE) are generally safe with few side effects in non-cirrhotic patients[4]. Suppression of the right portal flow causes atrophy of the right lobe, and induces the production of various growth factors and proinflammatory cytokines that prepare hepatocytes for growth (for review, see[5]). Whereas arterial ischemia can induce massive liver necrosis, the suppression of portal flow leads to progressive apoptosis with minor consequences for liver function[6], owing mainly to a compensatory increase in arterial blood flow in the deprived lobe, a phenomenon called “hepatic arterial buffer response (HABR)”[7]. Here we report a case of massive hepatic necrosis of both the right lobe and segment 4 after PVL in a patient treated for CRLM, with secondary cardiac, pulmonary and renal insufficiency due to toxic liver syndrome.

A 60-year-old man was referred to our tertiary center for treatment of metachronous bilobar colorectal liver metastases. He had no medical history. Two years before he had undergone right colectomy for stage II colon cancer with no adjuvant anticancer therapy. During oncologic follow-up, three CRLM were detected by multidetector computed tomography scan: two in the right lobe, and one large one encircling the right and middle hepatic veins and displacing the left hepatic vein (Figure 1). Neoadjuvant chemotherapy (six courses of FOLFOX with cetuximab) was administered, with control imaging showing objective response according to RECIST criteria[8]. Radical resection required right hepatectomy enlarged to segment 4 (right trisectionectomy according to the Brisbane terminology[9]). To improve left lobe hypertrophy, we decided to perform a two-stage surgical procedure: first, right PVL with ligation of the glissonian branches of segment 4, and assessment of resectability using intraoperative liver ultrasonography (US) followed by right trisectionectomy. At first stage laparotomy, the liver was normal with no sign of chemotherapy-related injury. CRLM were confined to the right lobe and did not involve the left hepatic vein. A right PVL was performed with ligation of the glissonian branches of segment 4. 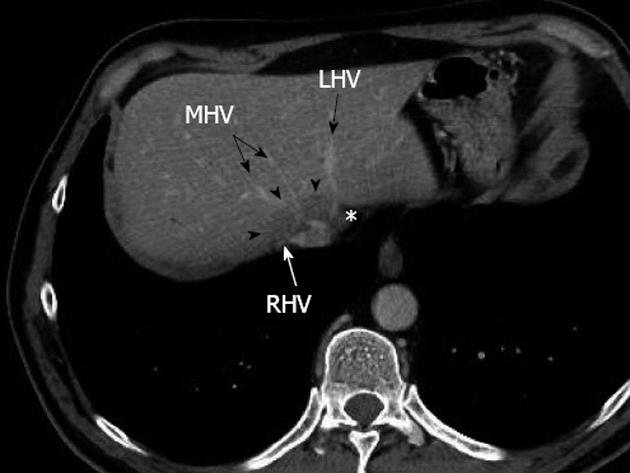 The immediate postoperative course was marked by a massive peak of transaminase and moderate liver insufficiency (Figure 2). The patient developed pulmonary and renal insufficiency with oligoanuria necessitating transfer to the intensive care unit (ICU) for non-invasive positive pressure ventilation and hemofiltration. US of the hepatic pedicle did not show any vascular thrombosis. Multidetector computed tomography (MD-CT) performed at postoperative day (POD) 2 showed massive hepatic necrosis of segment 4 and of a large part of the right hemi-liver, hypertrophy of the left lobe and ascites (Figure 3). Renal biopsy revealed acute tubular necrosis without any particularity (Figure 4). Liver biopsy was not performed because of relative liver insufficiency and ascites. The level of transaminases started to decrease progressively from POD 2, and hemofiltration was stopped after recovery of renal function at POD 12. Finally, the patient was discharged from ICU at POD 15. A liver abscess developed in segment 8 near the necrotic area. Percutaneous drainage showed infected collection without biliary leak, with favorable outcome after appropriate antibiotic treatment. The patient was discharged from hospital after 52 d. 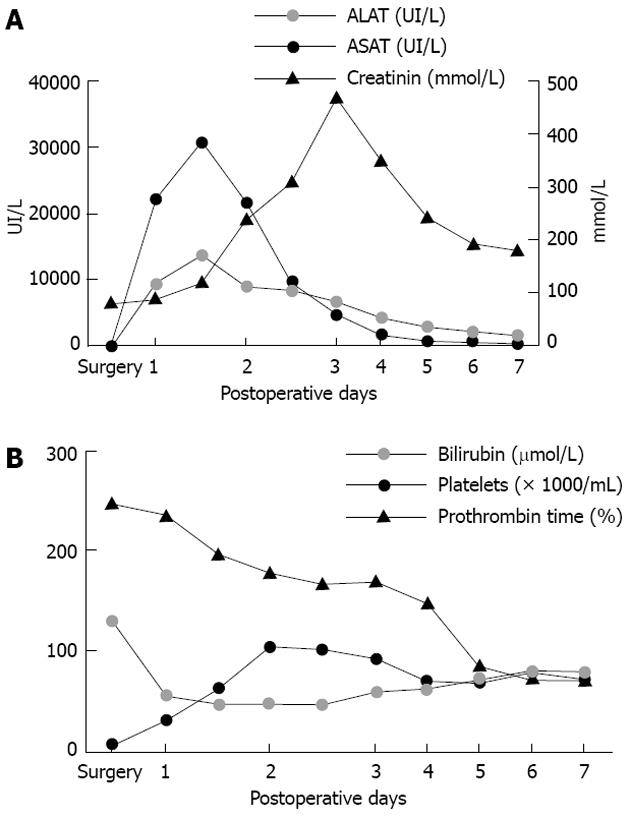 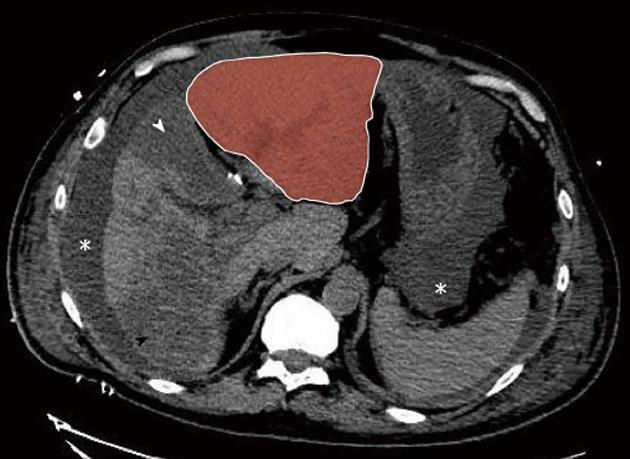 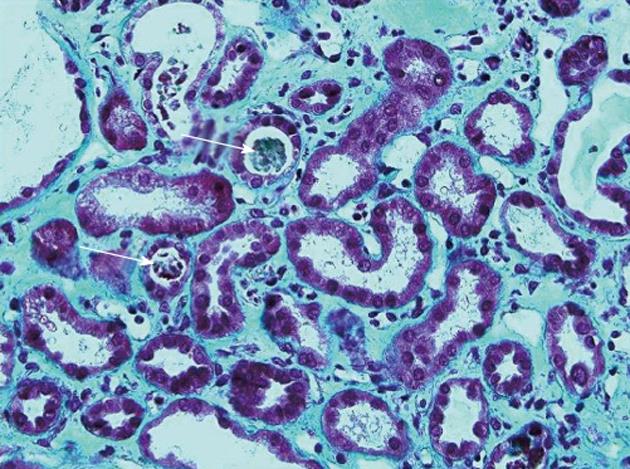 Portal vein occlusion by ligation or embolization is a safe procedure widely used to induce liver hypertrophy of the future remnant liver before major liver resection. The mortality of this procedure is these procedures nil and major morbidity is about 1%[6]. In the event of post-procedure symptoms, which occur in more than 50% of patients, transaminase levels peak at a level less than three times baseline 1 to 3 d after embolization and return to baseline in 7-10 d[10]. Fever and post-embolization syndrome, which are frequently observed after trans-arterial chemoembolization, are rare in PVE or PVL. Markers of liver insufficiency (bilirubin, prothombin time) are usually not affected. Hepatic necrosis of the ligated lobe has never been reported as a major complication[4]. Despite having different courses within the liver, arterial and portal blood flow drain in a common terminal hepatic veinule[11]. Thus, occlusion of a branch of the portal vein induces an ipsilateral HABR that guarantees rapid normalization of overall blood flow in the ligated lobe[12]. Flow in the hepatic artery of the ligated lobe increases by more than 3-fold for this compensatory effect and is usually well tolerated as venous outflow can absorb the overflow[13]. Hepatic necrosis involves the interruption of hepatic arterial flow with secondary damage due to liver hypoxemia. Interestingly, portal arterialization by arterioportal shunting restores normal oxygen supply within the liver and can prevent liver necrosis[14]. Hence, hypoxemia is the main cause of liver necrosis and explains why portal vein obstruction alone cannot induce hepatic necrosis. In contrast, impairment of venous outflow following compression by liver tumors may be very deleterious in this situation. Studies on venous drainage of right lobe grafts in living donor liver transplantation have demonstrated that non reconstruction of the middle hepatic vein can lead to congestion of the anterior sector, with possible severe liver dysfunction[15,16]. In such cases, assessment of hepatic tissue oxygenation using near-infrared spectrometry has confirmed congestion with hypoxemia of the anterior sector[17]. As a consequence, portal veins can become the draining veins to ensure adequate venous outflow, via a mechanism of regurgitation[18]. Finally, it can be speculated that compression of the right and median hepatic veins by liver metastases silently reduced the flow in these veins, with partial recovery of liver outflow through the portal system. PVL in this condition could have induced acute congestion with secondary necrosis of the right liver. Congestion was probably worsened by increased hepatic arterial inflow due to hepatic arterial buffer response secondary to PVL.

Acute congestion probably led to massive hepatic necrosis of the right lobe with partial liver insufficiency. In our patient, massive hepatic necrosis caused renal, cardiac and respiratory dysfunction. This so-called “toxic liver syndrome (TLS)” was first described by Ringe et al[19] in fulminant hepatic failure. Definition is based on complete liver necrosis associated with cardiovascular shock, renal, and possibly respiratory failure requiring vasopressor support, hemodialysis, and mechanical ventilation[19]. The pathophysiology is still unclear but seems to involve toxic metabolites released from the necrotic liver, such as cytokines or cardiosuppressive factors, known to play a role in cardiac and pulmonary instability after liver ischemia-reperfusion syndrome[20,21]. Furthermore, intra-abdominal hypertension related to an increase in the volume of the intra-abdominal organs and ascites can impair cardiac preload by reduced venous return and pulmonary function and by limitation of abdominal wall expansion[22]. TLS is invariably fatal, and all the studies on the topic have been published in the setting of two-stage liver transplantation[19,23-26]. To the best of our knowledge, there are no documented cases of reversible TLS. The syndrome usually develops following graft failure or acute rejection in liver transplantation, but can also have traumatic, toxic or postoperative causes[19]. Spontaneous evolution of TLS is fatal mainly because of its association with liver failure[19]. One approach is wo-stage liver transplantation, which consists in (1) removing the necrotic liver to avoid toxic syndrome and stabilize the patient; and (2) restoring hepatic function with transplantation[27]. In our case, the patient did not develop fatal complications, for at least two reasons. First, only a part of the liver was involved by necrosis so that TLS was comparatively moderate. Second, the remnant liver spared by necrosis was neither cirrhotic nor fibrotic and was able to ensure sufficient hepatic function to minimize liver insufficiency, as demonstrated by the rapid hypertrophy visualized on MD-CT. Taken together, these two factors may have limited the consequences of TLS and directly contributed to the patient’s favorable clinical evolution.

Portal vein ligation must be avoided when impaired venous return is suspected. There is the risk of massive hepatic necrosis occurring due to hepatic congestion and secondary toxic liver syndrome, which can be fatal. This is the first documented observation of a spontaneously reversible toxic liver syndrome with minor hepatic failure.