Hepatic artery pseudoaneurysm (HAP) is a very rare disease but in cases of complication, there is a very high mortality. The most common cause of HAP is iatrogenic trauma such as liver biopsy, transhepatic biliary drainage, cholecystectomy and hepatectomy. HAP may also occur with complications such as infections or inflammation associated with septic emboli. HAP has been reported rarely in patients with acute pancreatitis. As far as we are aware, there is no report of a case caused by acute idiopathic pancreatitis, particularly. We report a case of HAP caused by acute idiopathic pancreatitis which developed in a 61-year-old woman. The woman initially presented with acute pancreatitis due to unknown cause. After conservative management, her symptoms seemed to have improved. But eight days after admission, abdominal pain abruptly became worse again. Abdominal computed tomography (CT) was rechecked and it detected a new HAP that was not seen in a previous abdominal CT. Endoscopic retrograde cholangiopancreatography (ERCP) was performed because of a suspicion of hemobilia as a cause of aggravated abdominal pain. ERCP confirmed hemobilia by observing fresh blood clots at the opening of the ampulla and several filling defects in the distal common bile duct on cholangiogram. Without any particular treatment such as embolization or surgical ligation, HAP thrombosed spontaneously. Three months after discharge, abdominal CT demonstrated that HAP in the left lateral segment had disappeared.

Hepatic artery pseudoaneurysm (HAP) is rare[1,2]. But rupture is common and occurs in 76% of patients with HAP. There are many causes of HAP, but it usually results from procedures such as liver biopsy, transhepatic biliary drainage, cholecystectomy, and hepatectomy[3]. HAP may also occur with complications such as infections or inflammation associated with septic emboli[4-7]. HAP has rarely been reported in patients with acute pancreatitis[8,9]. As far as we are aware, there is no report of a case caused by acute idiopathic pancreatitis. We report a case of HAP thought to be caused by acute pancreatitis due to unknown cause, in a 61-year-old Korean woman. HAP spontaneously thrombosed without any particular treatment and finally disappeared several months later. We also review the literature concerning HAP.

A 61-year-old Korean woman was admitted to the emergency room with right upper quadrant pain and vomiting starting 8 h before admission. She was previously well-nourished, and had no past medical history. The patient denied a history of percutaneous intervention, abdominal surgery, trauma, viral hepatitis, bleeding disorders, jaundice or blood transfusion. On admission, her blood pressure was 120/80 mmHg, pulse rate was 78/min, and body temperature was 36.8 °C. On examination, her appearance was that of acute illness and her tongue was mildly dehydrated. But she was clinically non-anemic and non-icteric. Abdominal examination revealed right upper quadrant tenderness without rebound and hepatomegaly. Rectal examination showed no melena.

After conservative management, her symptoms were improved but eight days after admission, her abdominal pain abruptly deteriorated again. Laboratory data were as follows: hemoglobin 12.2 g/dL; hematocrit 35.7%; white blood cell count 9200/μL with 69.2% neutrophils; platelet count 118 000/μL; prothrombin time 14.1 s (INR 1.20); alkaline phosphatase 83 U/L; total bilirubin 0.6 g/dL; ALT 13 U/L; AST 22 U/L; gamma-glutamyl transferase 33 U/L. Amylase (69 U/L) and lipase (153 U/L) were within normal ranges. On a second check-up with abdominal CT, the infiltration and swelling of the pancreas head was improved and there was no stone in the biliary tract. But it showed a newly developed hepatic artery pseudoaneurysm in the left lateral segment and no evidence of acute bleeding related to it as a complication (Figure 2). We performed endoscopic retrograde cholangiopancreatography (ERCP) in order to find the cause of aggravated pain with suspicion of hemobilia. Several filling defects with labile and indeterminate shapes were observed on cholangiogram and, after sphincterotomy, these findings were confirmed to be caused by fresh blood clots without a stone, and blood clots were removed with a balloon catheter and basket (Figure 3). Emergent angiography was not performed due to no further acute bleeding evidence. 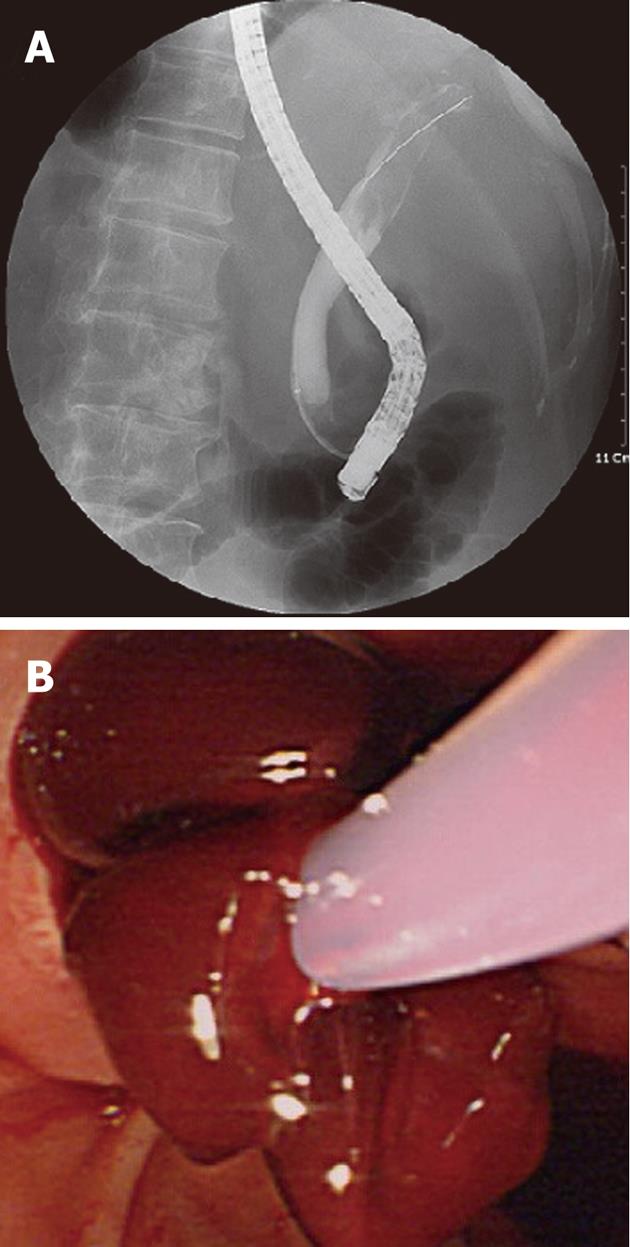 Figure 3 Cholangiogram by endoscopic retrograde cholangiopancreatography showed several amorphous filling defects in the common bile duct (A) and lots of blood clots were seen and removed by basket after endoscopic sphincterotomy (B).

After ERCP, the patient’s pain improved and filling defects caused by blood clots of the extrahepatic duct were not observed on endoscopic nasobiliary drainage cholangiogram. Magnetic resonance imaging showed that dilatation or filling defects of the bile duct disappeared and bleeding of proximal HAP was replaced by thrombus formation (Figure 4). Two days later, angiography revealed no visible contrast leakage and definite HAP. Her symptoms resolved rapidly, and she was discharged on the 16th day after clot removal.

Figure 4 Magnetic resonance imaging scans of the abdomen revealed that hepatic artery pseudoaneurysm was replaced by thrombus formation (white arrows) in the left lateral segment in-phase (A) and out-of-phase (B) T1-weighted images and T2-weighted image (C). 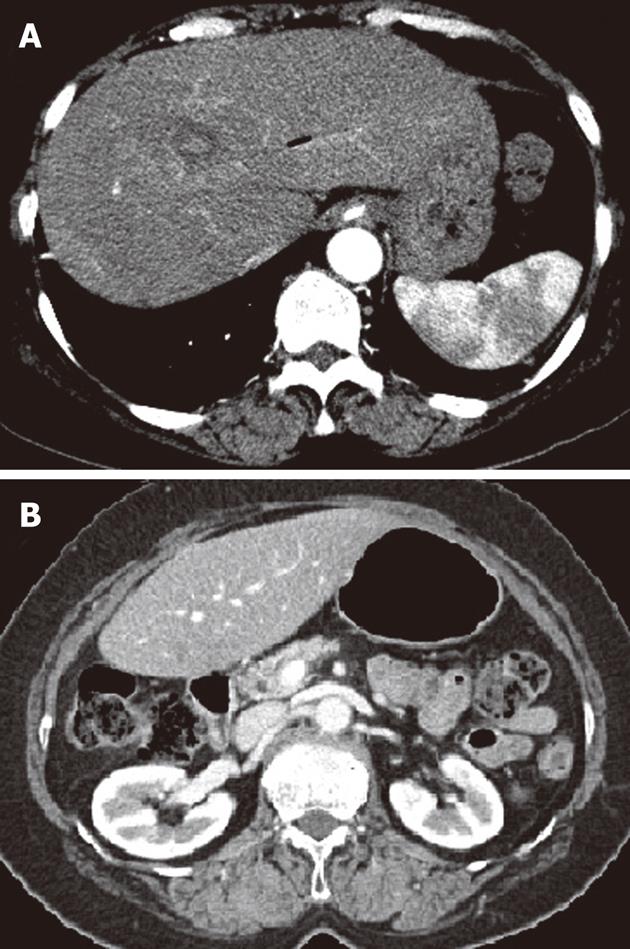 Figure 5 Follow-up of abdominal computed tomography scans 3 mo later showed that both previously noted hepatic artery pseudoaneurysm in the left lateral segment (A) and diffuse swelling and infiltration of pancreas (B) had disappeared.
DISCUSSION

In this case, it can be presumed that a rupture of preexisting HAP was not detected on initial abdominal CT imaging, resulting in hemobilia and eventually, acute pancreatitis was complicated by hemobilia. However, considering the fact the patient had normal levels of hemoglobin and no bile duct dilatation or filling defects when visiting hospital and the clinical course worsened (e.g., pain) despite the improvement of acute pancreatitis during the treatment, this possibility is very low. She was hospitalized for 8 d without any evidence of this procedure, and hemobilia-induced abdominal pain developed without aggravation of acute pancreatitis. This makes the scenario of pancreatitis-induced HAP more reasonable.

HAP is a rare and potentially fatal disease if it ruptures. In most cases, conservative management is not recommended due to the high rupture rate. Treatment comprises reconstructive surgery, or ligation depending on the size of the lesion and its location in the past. Today, the treatment of choice is selective transcatheter embolization[10,12,13]. However, in very limited cases, which means, unless HAP is not at risk of immediate rupture because of progressively enlarging size or instability, it can be managed by closed medical observation and imaging follow-up with appropriate treatment of the associated infection[14]. In this case, there was only conservative management of acute pancreatitis which is thought to be a cause of HAP. But we could confirm that HAP spontaneously thrombosed without any particular treatment at the image study. Three months after discharge, abdominal CT demonstrated that HAP in the left lateral segment had disappeared.

In summary, we report a rare case of a 61-year-old Korean woman who had HAP caused by acute idiopathic pancreatitis. In this case, HAP spontaneously thrombosed and then disappeared after recovery of acute pancreatitis. This case alerts clinicians that acute pancreatitis can be considered as a potential cause of HAP.