AIM: To determine the associations between leptin and ghrelin concentrations and sustained virological response (SVR) in chronic hepatitis C patients with steatosis.

METHODS: We retrospectively assessed 56 patients infected with hepatitis C virus (HCV) genotype-1 and 40 with HCV genotype-3. Patients with decompensated cirrhosis, and those with other causes of chronic liver disease, were excluded. Serum HCV-RNA concentrations were measured before the initiation of treatment; at weeks 12 (for genotype 1 patients), 24 and 48 during treatment; and 24 wk after the end of treatment. Genotype was determined using INNO-LIPA HCV assays, and serum leptin and ghrelin concentrations were measured using enzyme-linked immunosorbent assay. Biopsy specimens were scored according to the Ishak system and steatosis was graded as mild, moderate, or severe, according to the Brunt classification.

Hepatic steatosis is a histopathological feature observed in > 50% of patients with chronic hepatitis C (CHC)[1,2], but occurs less frequently in patients with chronic hepatitis B (27%-51%) and autoimmune hepatitis (16%-19%)[3,4]. Steatosis in CHC patients has been attributed to a combination of mechanisms involved in the pathogenesis of non-alcoholic fatty liver disease, as well as to the direct effect of hepatitis C virus (HCV) on hepatic lipid metabolism leading to triglyceride accumulation[5,6]. In contrast, steatosis in patients chronically infected with hepatitis B virus (HBV) is associated with host metabolic factors[7].

Leptin, the product of the obese (ob) gene, is mainly expressed by adipose tissue, although it is expressed in other organs, including the liver[13]. Leptin plays an important role in the regulation and metabolism of body fat and may induce insulin resistance, increase fatty acid concentrations in the liver, and enhance lipid peroxidation[5,8,9]. Leptin may act as an immunomodulator, inducing the release of cytokines, such as tumor necrosis factor (TNF)-α, interferon (INF)-γ, interleukin (IL)-18, and tumor growth factor (TGF)-β1, thus promoting liver steatosis and fibrosis[8].

Ghrelin is a peptide that acts as an endogenous ligand of the growth hormone secretatog receptor[14]. Ghrelin is involved in energy metabolism, food intake, and glucose homeostasis[14,15]. Recent studies have assessed whether ghrelin acts as an independent signal of adiposity or as a downstream mediator of leptin, affecting energy balance[16].

We retrospectively assessed patients with serologically, virologically, and histologically confirmed CHC, recruited between 2005 and 2008. Patients were included if they had detectable anti-HCV antibody by enzyme-linked immunosorbent assay (ELISA) III at least twice a year, detectable serum HCV-RNA by a sensitive PCR assay within 1 mo prior to the start of treatment, liver biopsy showing chronic hepatitis with steatosis within 6 mo before treatment, and elevated alanine aminotransferase (ALT) activity (> 40 IU/L and < 400 IU/L) at entry and at least once during the 6 mo before the first screening.

None of these patients had previously received antiviral treatment or steatosis-inducing therapy. The duration of HCV treatment with PEGylated INF-α and ribavirin was genotype-based. Genotype 1 patients who did not achieve undetectable HCV-RNA or a decrease in 2 logs of HCV-RNA at week 12 (early virological response or EVR), were considered non-responders but included in the study. All patients were clinically, hematologically and biochemically evaluated at weeks 2, 4, 8, 12, 24, 48, and 72 after the start of treatment.

The study protocol was approved by our institutional review board, and all patients provided written informed consent. The study conformed to the ethical guidelines of the 1975 Declaration of Helsinki.

Liver biopsies were obtained at baseline using the Menghini technique (mean length of biopsy cores, 1.7 cm). Liver tissue was fixed in 10% neutral formalin and paraffin-embedded sections were stained with hematoxylin-eosin and Masson trichrome stains. Liver biopsies were scored by an experienced liver pathologist using the Ishak scoring system. Steatosis was quantified as the percentage of hepatocytes that contained fat droplets and was graded using a three-tier scale: grade 1/mild (1%-33%), 2/moderate (33%-66%), and 3/severe (> 66%). Patients with histopathological findings of steatohepatitis, including hepatocellular ballooning or perisinusoidal fibrosis in zone 3, were excluded.

All continuous variables are presented as mean ± SD or medians ± interquartile ranges (75th-25th percentiles) if they deviated from normality. The association between each genotype and continuous variables was determined by ANOVA (using post-hoc Scheffe’s test when the omnibus test was significant) or Student’s t-test. The association between each genotype and categorical variables was determined using the χ2 test. Multiple logistic regression analyses were used to determine the association between response to therapy and leptin concentrations, ghrelin concentrations, hepatic steatosis, fibrosis, and HOMA-IR, with results presented as odds ratios and 95% CI. These analyses were performed separately for each genotype and for measurements at baseline and at the end of follow up. For reasons of multicollinearity, it was not possible to include steatosis and fibrosis in the same model. Therefore, fibrosis and steatosis were alternatively introduced (one at a time) into the core model. Mixed effect models were used to examine the relationship between baseline and end of follow-up leptin and ghrelin concentrations among responders and non-responders. There were no significant changes in weight or fat composition in the study population during treatment; therefore, there was no need to adjust leptin and ghrelin concentrations for BMI after treatment. All reported probability values (P-values) were based on two-sided tests, with significance set at 0.05. All statistical analyses were performed using the SAS statistical package (Version 9.1, SAS Institute Inc., NC).

Of the 154 treatment-naive patients with CHC screened, 96 fulfilled our enrollment criteria and completed treatment. The study population consisted of 60 men and 36 women, all of Caucasian origin; of these, 56 were infected with HCV genotype-1 and 40 with HCV genotype-3.

HCV genotypes and response to treatment

All patients received combination therapy with PEGylated INF a-2b or a-2a, plus weight-adjusted ribavirin, for 24 (genotype-3) or 48 (genotype-1) weeks. All tolerated treatment well and completed treatment without any major side effects, significant reductions in drug dose, and significant changes in BMI (reduction more than 2 kg/m2). Patients infected with HCV genotype-1 who did not achieve sustained virological response (SVR) stopped therapy, whereas those infected with HCV genotype-3 were treated for 24 wk without measurements of HCV-RNA at week 12, according to currently approved treatment guidelines. Of the 96 patients, 62 (64.6%) achieved SVR, whereas the remaining 34 (35.4%) did not.

Leptin, ghrelin and response to treatment

Among patients infected with HCV genotype-3, however, there were no significant differences in leptin concentrations at baseline and at end of follow-up between those who did and did not achieve SVR (Table 2). Using mixed effect model analysis, leptin remained unchanged, both in responders (P = 0.51) and non-responders (P = 0.61) (Table 4).

Figure 1 Correlation between leptin concentrations and steatosis in patients infected with hepatitis C virus genotypes-1 and -3 who did and did not achieve sustained virological response following treatment with PEGylated interferon a-2b or a-2a plus ribavirin. NS: Not significant.

Figure 2 Correlation between ghrelin concentrations levels and steatosis in patients infected with hepatitis C virus genotypes11 and -3 who did and did not achieve sustained virological response following treatment with PEGylated interferon a-2b or a-2a plus ribavirin. NS: Not significant. 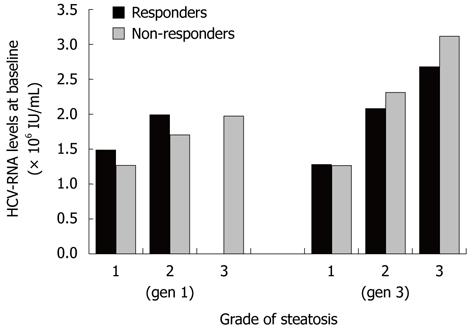 Figure 3 Correlation between viral load and steatosis in patients infected with hepatitis C virus genotypes-1 and -3 who did and did not achieve sustained virological response following treatment with PEGylated interferon a-2b or a-2a plus ribavirin. HCV: Hepatitis C virus.
Multivariate analysis

The mechanism by which HCV induces steatosis remains unclear. Steatosis in patients infected with the non-3 genotype has been associated with increased BMI, visceral obesity, increased cholesterol and triglyceride concentrations, insulin resistance, metabolic syndrome, diabetes, alcohol consumption, and increased sensitivity of the liver to oxidative stress or cytokine-mediated injury[17,18].

Leptin is a putative link between HCV infection and steatosis[19]. Although a high incidence of hyperleptinemia has been observed in HCV infected patients with liver steatosis[10,20], the underlying mechanism promoting this effect remains undefined. Leptin may increase insulin resistance and fatty acid concentrations in the liver, leading to enhanced lipid peroxidation and promoting steatosis[5]. Leptin may also induce the release of cytokines, such as TNF-α, INF-γ, IL-18, and TGF-β1, which are involved in the pathogenesis of both liver steatosis and fibrosis[8]. In steatosis, activated hepatic stellate cells, but not quiescent cells, can express leptin[21].

Our results clearly show that, in HCV infected patients with liver steatosis, serum leptin levels tend to increase as the grade of steatosis worsens. This finding is significant, especially in genotype-1 patients, suggesting that leptin increases during infection as a part of the host immune response, and may contribute to the development of steatosis. Although steatosis is more common and more severe in patients infected with HCV genotype-3[17,18], we found that leptin concentrations were not correlated with either the grade of steatosis or response to treatment. Structural and nonstructural proteins of HCV genotype-3 may directly cause steatosis by provoking oxidative stress[6,22,23]. Alternatively, the viral core protein may target microsomal triglyceride transfer protein activity, modifying very low density lipoprotein assembly in, and secretion by hepatocytes[24,25]. The core protein may also affect the cytoplasmic domain of members of the TNF receptor family or act directly on the mitochondria, leading to increased oxidative stress and lipid peroxidation[26]. In patients infected with HCV genotype-3, we found that the grade of steatosis was correlated with higher viral load at baseline, in agreement with the direct “steatogenic” effect of this genotype[6].

Although ghrelin is important in food intake, energy balance, and the regulation of the growth hormone releasing mechanism[15], its role in hepatic disease has not been extensively evaluated to date. Increased serum ghrelin concentrations have been reported in patients with cirrhosis and hepatocellular carcinoma, suggesting that this adipokine may be involved in the anorexia-cachexia syndrome during the terminal stages of liver diseases[27]. Data on ghrelin concentrations in patients with CHC are limited[28].

Our findings are in accordance with previous reports, which found that steatosis was an independent negative predictor of response to antiviral therapy[29-32]. We also found that genotype 1 patients with elevated leptin concentrations before treatment had a lower likelihood of achieving SVR, irrespective of their viral load. This observation is in keeping with the role of leptin as a suppressor of cytokine signaling 3 in the liver[33], or as a factor that inhibits INF signaling.

In conclusion, our results suggest that the extent of hepatic steatosis, in addition to the stage of fibrosis and the viral genotype, may affect the likelihood of SVR in CHC patients. Leptin appears to contribute to the pathogenesis of steatosis, and we found that elevated serum leptin concentration may be an independent predictor of SVR in HCV genotype-1 infected patients. Increase ghrelin concentrations after successful treatment in genotype 1 patients indicate that this peptide plays a role in the achievement of SVR. Further investigations are needed to determine whether ghrelin acts as a downstream mediator of leptin and to assess the influence of ghrelin on liver steatosis and HCV infection.

Steatosis is a frequent histopathological feature in patients with chronic hepatitis C (CHC). Leptin and ghrelin are involved in body fat regulation and metabolism. Higher serum leptin concentrations have been associated with steatosis, but less is known about leptin and ghrelin concentrations in patients with CHC and steatosis or the effect of these peptides on response to treatment.

These findings suggest that serum leptin concentrations may be an independent negative predictor of SVR in HCV genotype-1 infected patients with steatosis; the role of ghrelin requires be further investigation.

Leptin, the ob gene product, is expressed mainly by adipose tissue, although it is expressed in other organs, including the liver. Leptin is important for body fat regulation and metabolism. Ghrelin, a peptide that acts as an endogenous ligand for the growth hormone secretatog receptor, is involved in energy metabolism, food intake and glucose homeostasis.

The research study has an important outcome and could be further strengthened by exploring the existing data for an effect of sex on these parameters, if any.