AIM: To investigate the effect of severe acute pancreatitis (SAP) on pharmacokinetics of Da-Cheng-Qi Decoction (DCQD) components in rats.

CONCLUSION: SAP can significantly impact the absorption of DCQD components in rats and their pharmacokinetic parameters.

Acute pancreatitis, occurring suddenly and usually resolving after a few days of treatment, may become life-threatening if severe complications take place. Fulminant acute pancreatitis is more dangerous[1]. Severe acute pancreatitis (SAP), characterized by intricate mechanism, variant symptoms, grave prognosis and multiple complications, seriously threatens the life of patients and brings a heavy burden to the society, families and economy. Each year, about 210 000 patients with acute pancreatitis in the United States are admitted to hospitals[2]. Additionally, neither standard treatment nor other medications are available for SAP patients at present[3]. SAP, similar to Yangming Fushi syndrome (YMFSS) according to the traditional Chinese medicine, has been treated with purgative herbals throughout China for more than three decades[4-6].

Da-Cheng-Qi Decoction (DCQD), a famous preparation of traditional Chinese medicine used in treatment of digestive diseases, is composed of Dahuang (Caulis Fibraureae), Houpu (Cortex Magnoliae Officinalis), Zhishi (immature bitter orange) and Mangxiao (Natrii Sulphas). It has been reported that DCQD can restore gastrointestinal function by facilitating motility, relieving enteroparalysis and evacuating “dry stool”[7], prevent bacterial translocation and counteract with endotoxin, regulate Ca2+-Mg2+-ATPase in the pancreatic acinar cells[8]. SAP can be treated with Chinese herbal decoctions based on the above mechanism. However, no studies are available on the pharmacokinetics of such decoctions in acute pancreatitis. According to the theory “syndrome and treatment pharmacokinetics”, YMFSS should influence the pharmacokinetics of DCQD[9], but it has not been proved experimentally up to date.

Thus, we quantified the DCQD components absorbed in rats with SAP characterized by YMFSS and studied the influence of SAP on the pharmacokinetics of DCQD components[10].

Male clean-grade, healthy Sprague-Dawley rats, weighing 320 ± 25 g, at the age of 90 ± 5 d, were used in this study. The rats were handled according to the University Guidelines and the Animal Ethics Committee Guidelines of the Animal Facility of the West China Hospital, maintained in air-conditioned animal quarters at 22 ± 2°C with a relative humidity of 65% ± 10%, acclimatized to the facilities for 10 d, and then fasted for 24 h with free access to water prior to experiments.

The structures of rhein, chrysophanol, rheochrysidin, magnolol, hesperidin, naringin and ibuprofen (internal standards) are presented in Figure 1. Reference standards for these components of DCQD and the internal standard (IS) were purchased from the National Institute for the Control of Pharmaceutical and Biological Products (Beijing, China). Methanol with a chromatographic grade was obtained from Tedia Company Inc. (USA). Acetic acid and ethyl acetate were bought from Chongqing Chemistry Co. Ltd. (Chongqing, China). Ammonium acetate, sodium hydroxide and hydrochloric acid (analysis grade) were purchased from Chengdu Kelong Chemical Reagent Factory (Chengdu, China). All aqueous solutions and buffers were prepared with deionized water from a Millipore RiosTM-16 water purifier (Millipore, Billerica, MA, USA)[11].

A mass spectrometer was operated using an electrospray source configured to the negative ion mode and quantification was performed by multiple reaction monitoring (MRM). Production mass spectra of the analytes are shown in Figure 1 where [M-H]- of each analyte was selected as the precursor ion, and the most abundant or specific fragment ion was selected as the production in MRM acquisition. Instrumental parameters were optimized for each analyte by infusing the corresponding standard solution at a flow rate of 5 μL/min, using a syringe pump integrated into the API 3000 mass spectrometer. Nitrogen was used as a curtain, and auxiliary gas and air were used as a nebulizer gas. Electrospray conditions for the 6 major DCQD components and IS were curtain gas (6.0 L/min), ion-spray voltage (-4500 V), nebulizer gas (6.0 L/min), auxiliary gas (7.0 L/min), turbo temperature (4°C), respectively. Optimized mass spectrometry parameters for each DCQD compound and IS are listed in Table 1[11].

Blank and spiked rat plasma chromatograms were compared to evaluate the selected method (Figure 2). Calibration curves were plotted from the peak area ratio of each analyte to IS vs plasma concentrations using a 1/c2 weighted linear least-squares regression model. The lower limit of quantification was set at the concentration of the lowest non-zero calibration standard (S/N ≥ 10:1) that could be measured with an acceptable accuracy and precision (≤ 20% for both parameters). Intra- and inter-day precisions were determined by assessing the measured results of QC samples at low, medium and high concentrations (Table 1). Accuracy was determined as the difference in percentages between the mean and nominal concentrations detected (Table 1). Extraction recoveries of the 6 analytes were determined by comparing the peak areas obtained from rat plasma samples with those from the unextracted standard solutions at the same concentration (Table 1). Bench-top stability of the 6 analytes in rat plasma was determined by assessing the QC samples after stored for 2 and 4 h at room temperature. Freeze-thaw stability was detected after two cycles and long-term stability was determined by assessing the QC samples stored at -30°C for 14 d. QC samples were prepared, injected and reinjected after the samples were maintained in the autosampler at 8°C for 12 d. Stability of the analytes was detected by comparing the measured results with those of freshly prepared samples at the same concentration[11] (Table 2). 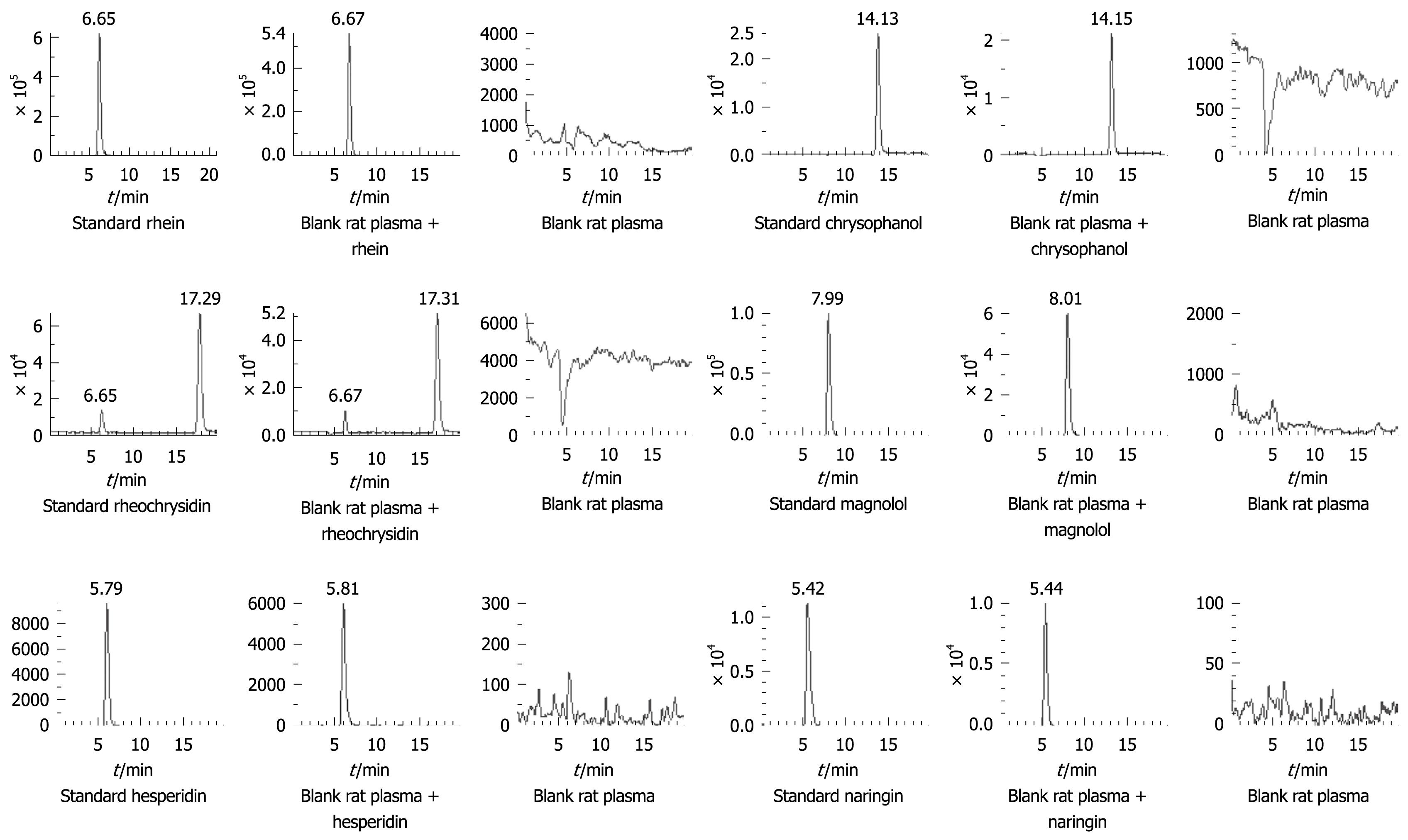 Acute pancreatitis was induced in rats. The animals were anesthetized with ethyl ether as previously described[12].

Dahuang, Houpu, Zhishi and Mangxiao were purchased from Chengdu Green Herbal Pharmaceutical Co. Ltd. (Chengdu, China) and authenticated by Professor Yang Song (Department of Pharmacognosy, Sichuan University, China). DCQD was routinely prepared with 6.0 g of Dahuang, 6.0 g of Houpu, 6.0 g of Zhishi and 6.0 g of Mangxiao. For crude drugs, the spray-dried DCQD was reconstituted in water to a concentration of 1 g/mL. The contents of the six DCQD components were measured as previously described[13]. The crude DCQD preparation was administered through the duodenum of rats at a dosage of 20 g/kg. The voucher specimens were kept in our laboratory.

Rats in SAP and control groups were fed with laboratory rodent chow by gavage. Concentration of DCQD components in plasma was measured by HPLC-TMS. Concentration-time curves were plotted for various components from DCQD.

HPLC-TMS for simultaneous determination of the six components has been validated in our laboratory[11,14]. Plasma samples were spiked with the IS (ibuprofen), acidified by HPLC and extracted twice using ethyl acetate. The HPLC-TMS system was operated under MRM modes using electrospray ionization in the negative ion mode.

Data collection, peak integration and calibration were performed with Analyst 1.4.2 software. Calibration curves were plotted according to the peak area ratio of analytes to ISs, and the linear regression between plasma concentration and peak area ratio was weighed by 1/x2. Concentrations of QC and unknown samples were measured by interpolation from the calibration curves. Drug and statistics software programmed by the Chinese Pharmacological Society was used to process the plasma concentration data and compartment model fitting and then all the pharmacokinetic parameters were figured out. The results were expressed as mean ± SD. The pharmacokinetic parameters of each DCQD component were compared with statistical software PEMS3.1 and the difference was compared by sample pairing and t-test. P < 0.05 was considered statistically significant.

The mean plasma concentration of rhein was obviously higher, the peak time (Tmax) of rhein was significantly shorter while the T1/2α was significantly higher, and the clearance rate (CL/F) and AUC of rhein were obviously lower in SAP group at each time point than in control group within 12 h after treatment with DCQD, suggesting that acute pancreatitis can impact the absorption, distribution and elimination of rhein in rats (Figure 3, Table 3). 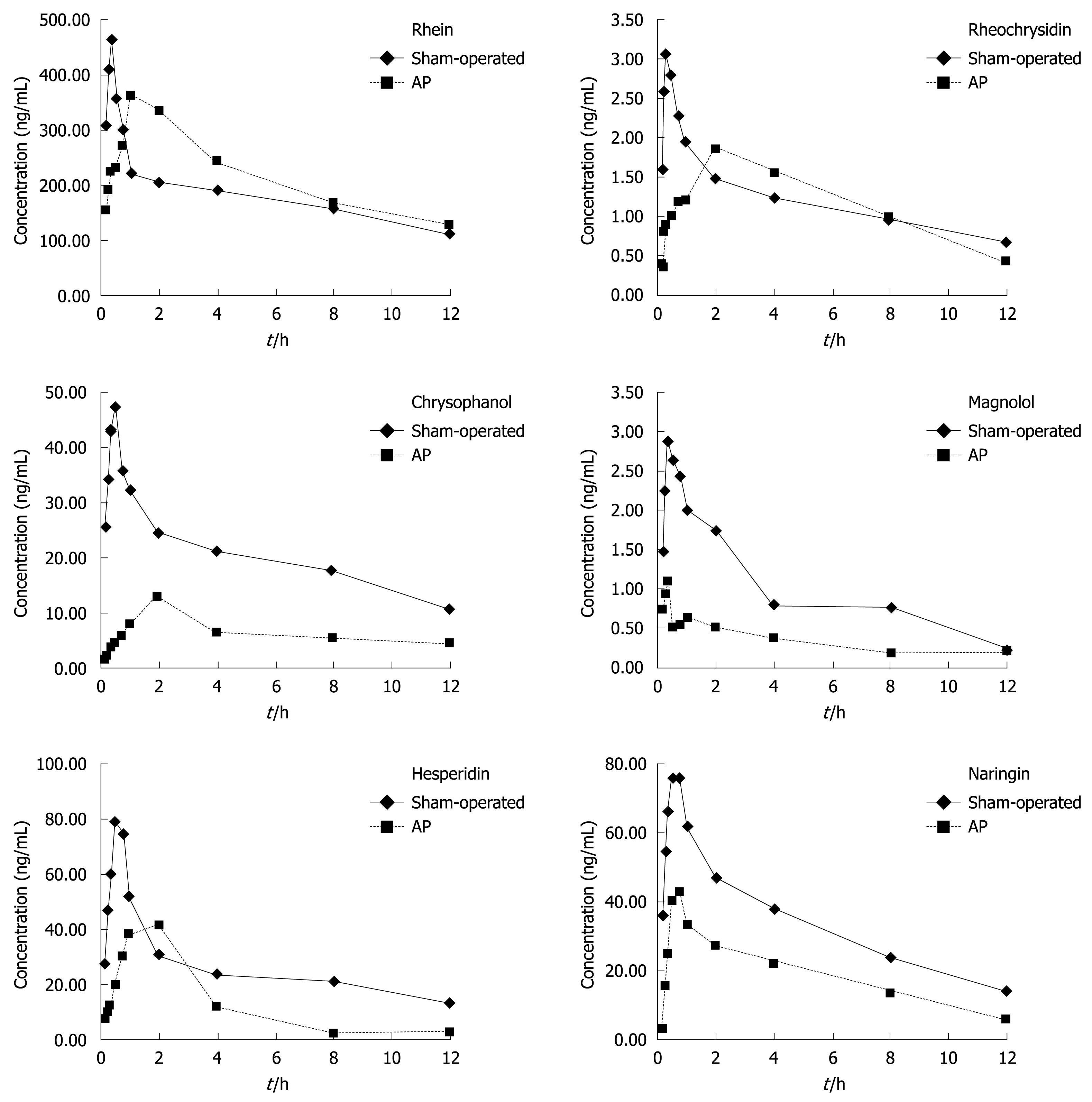 Figure 3 Plasma concentration-time curves for DCQD components in rats of the two groups (n = 6).
Rheochrysidin in rats after a single dose of DCQD by gavage

Chrysophanol in rats after a single dose of DCQD by gavage

Magnolol in rats after a single dose of DCQD by gavage

The mean plasma concentration of magnolol was obviously lower, the Cmax and AUC of magnolol were obviously lower while the T1/2α, MRT and Tmax were similar between the two groups within 12 h after treatment with DCQD, suggesting that SAP can significantly affect the bioavailability of magnolol (Figure 3, Table 4).

Hesperidin in rats after a single dose of DCQD by gavage

Naringin in rats after a single dose of DCQD by gavage

The mean plasma concentration of naringin and the Cmax and AUC of naringin were obviously lower in SAP group at each time point than in control group within 12 h after treatment with DCQD, revealing that acute pancreatitis can impact the absorption, distribution and bioavailability of naringin in rats (Figure 3, Table 4).

In the present study, the early absorption of each DCQD component tended to degrade in SAP group, the Cmax and AUC of DCQD components such as chrysophanol, magnolol, hesperidin and naringin were obviously lower in SAP group than in control group, suggesting that lack of an effective blood volume and a systematic inflammatory response to organ damage in SAP rats would affect the distribution, metabolism and excretion of DCQD components[15].

No significant difference was found in T1/2α and Tmax of DCQD components such as magnolol and naringin between the two groups, which may be due to the way of modeling experiments. Rats were anaesthetized with ethyl ether and recovered 10 min later with free activity. Two hours after treatment with DCQD, the rats became conscious and maintained normal physiology, indicating that influence of anesthesia on physiology and pharmacokinetics in rats can be ignored[16].

However, the T1/2α and Tmax of rhein, rheochrysidin and chrysophanol were longer in SAP group in control group. In addition, the absorption of DCQD components was greatly affected by variant molecular constitutions and lower pH of SAP rats in vitro.

In summary, SAP can obviously impact the absorption and pharmacokinetic parameters of DCQD containing rhein, chrysophanol, rheochrysidin, magnolol, hesperidin and naringin in rats.

Severe acute pancreatitis (SAP), characterized by intricate mechanism, variant symptoms, grave prognosis and multiple complications, seriously threatens the life of patients and brings a heavy burden to the society, families and economy. Additionally, either standard treatment or other medications for SAP is available at present. In China, clinical and experimental researches on Da-Cheng-Qi Decoction (DCQD) have shown that DCQD is a valid prescription for the treatment of SAP.

SAP, similar to Yangming Fushi Syndrome (YMFSS) according to the traditional Chinese medicine, has been treated with purgative herbals throughout China for more than three decades. However, no studies are available on the pharmacokinetics of DCQD components in rats with acute pancreatitis.

Acute pancreatitis was found to have certain effects on the pharmacokinetics of DCQD components in rats, showing that DCQD can be used in treatment of SAP.

The authors investigated the effect of acute pancreatitis on the pharmacokinetics of DCQD components in rats, which may contribute to the treatment of SAP.