METHODS: Human hepatocarcinoma cell lines (HepG2 and Hep3B) in culture were treated with inhibitory concentrations, 50% of the compound, for 24 h. The induction of apoptosis was detected in treated cells by analysis of DNA fragmentation, DNA content, and acridine orange and propidium iodide staining.

RESULTS: After 24 h of 5-alkyl resorcinol treatment, both cell lines showed: (1) the typical morphological alterations of apoptosis; (2) DNA fragmentation, detected by laddering and appearance of a subG0 population by flow cytometry; and (3) condensed and fragmented nuclei by acridine orange-propidium iodide staining.

CONCLUSION: Based on the results, this compound exerts its cytotoxic effect in both hepatocellular cell lines through apoptotic cell death. For Hep3B, cells with mutated p53 and Fas, apoptosis would proceed by p53- or Fas-independent pathways.

Hepatocellular carcinoma is the 5th most common cancer in the world and the 4th most common cause of cancer-associated mortality[1]. Surgical resection and local treatment are frequently limited, as a result of metastasis, cirrhosis, and other pathological changes in the liver parenchyma. The development of chemotherapeutic or chemopreventive agents for hepatocellular carcinoma is important to reduce the mortality caused by this disease. Since cell homeostasis depends on the balance between proliferation and apoptosis, effective compounds inducing apoptosis appear to be a relevant strategy to suppress tumor growth[2]. Cytotoxic drugs cause cell death in sensitive cells, at least partly, by induction of apoptosis.

The Anacardiaceae family comprises many medicinal species from which a number of biologically active substances, such as various phenolic lipids (alkylresorcinols, alkylphenols, alkylcatechols), have been isolated. These compounds present antibacterial, fungicidal and cytotoxic properties[3,4]. In addition, cytotoxic activity on tumor cells (B-16, PC-13, L-5178Y, P-388 and Hep-2) and antitumor activity against S-180 tumors in mice have been reported[5,6]. Lithraea molleoides (Vell.) Engl, a member of the Anacardiaceae family, is a Southamerican tree that grows in Argentina, Brazil and Uruguay[7,8]. We have previously reported cytotoxic activity for the methanol extract of L. molleoides on HepG2 cells[9]. Further activity-guided fractionation of the dichloromethane extract has led to the isolation of a pure bioactive compound, a new cytotoxic 5-alkyl resorcinol (5-AR) derivative: 1,3-dihydroxy-5-(tridec-4’,7’-dienyl) benzene[10].

The aim of the present study was to analyze the mechanism of cytotoxicity of this compound, by studying apoptosis induction on treated HepG2 and Hep3B hepatoma cell lines.

MATERIALS AND METHODS
Isolation and identification of the compound

The isolation and characterization of the L. molleoides compound 1, 3-dyhydroxy-5- (tridec-4´, 7´-dienyl) benzene has been previously described[10].

The cytotoxicity assay was carried out as previously described[9]. Briefly, 5 × 103 of HepG2 or Hep3B cells in growth medium were seeded in each well of a 96 well-microtiter plate, and incubated for 24 h at 37°C. Different concentrations of the 5-AR (in quadruplicates) were added to the exponentially growing cells. Cell controls in absence of the compound were included. After an incubation period of 24 h at 37°C, the MTT assay was performed following the manufacturer’s instructions. The absorbance values at 546 nm and 650 nm were recorded in an ELISA plate reader (Meterech 960). The 50% inhibitory concentrations (IC50) for both cell lines were determined by linear regression from dose-response curves.

Approximately 1-2 × 106 of control or treated cells were harvested and washed twice with PBS. DNA was extracted by the Wizard Genomic DNA Purification Kit (Promega), according to the manufacturer´s instructions. The DNA pellet was washed, air-dried, resuspended and electrophoresed on 1% agarose gel at 50 volts for 3  h. The gel was visualized under UV transilluminator and photographed.

Analysis of the DNA content by flow cytometry (hypoploid cells)

After a 24-h 5-AR treatment, control or treated cells were harvested and washed twice with 1 g/L bovine serum albumin (BSA) in PBS. They were fixed in 700 mL/L ethanol for 1 h at 4°C, washed twice with 1 g/L BSA in PBS and resuspended in the same buffer. After the addition of a DNA extraction buffer (192 mmol/L PO4HNa2; 4 mmol/L citric acid; pH 7.8), incubation at room temperature (RT) for 5 min and centrifugation, the cells were stained with propidium iodide (Sigma, 50 µg/mL) and treated with RNAse A (Sigma, 0.5 mg/mL) for 30 min at RT. Cells were analyzed on a flow cytometer (FACSCalibur, Becton Dickinson) containing an argon laser (488 nm). The red fluorescence of propidium iodide, proportional to the DNA content, was collected through a 620 ± 15 nm band pass filter. A minimum of 10 000 cells per sample was collected and DNA hystograms were further analyzed by the WinMDI 2.8 program.

Approximately 1 × 106 of control or treated cells were resuspended in 5 mL of PBS containing 5 µg/mL of acridine orange (Sigma) and 5 µg/mL of propidium iodide (Sigma). The cell suspension was immediately dispensed onto slides, viewed under fluorescent microscopy (Nikon Eclipse 400) and photographed (Nikon Coolpix 4500).

The cytotoxicity of 5-AR on HepG2 and Hep3B human hepatoma cell lines was assessed by a cell viability assay, in the presence of different concentrations of the compound for 24 h. Under these experimental conditions, 5-AR exhibited a significant cytotoxic effect on both HepG2 and Hep3B cells. The IC50 values for HepG2 and Hep3B were interpolated from linear regression curves: 13.12 µg/mL (45.49 µmol/L) and 12.45 µg/mL (43.17 µmol/L), respectively (Figure 1). Both viability curves for 5-AR were practically overlapped, suggesting a parallel effect for cell death in both cell lines. This effect is independent of the p53 status of the cells, as cytotoxicity by 5-AR was similar for HepG2, which posses wild-type p53, and Hep3B, which are p53-deficient. 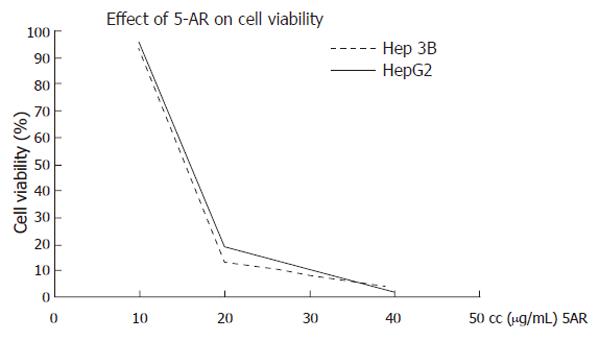 Figure 1 Treatment with 5-AR is highly cytotoxic for HepG2 and Hep3B cells. Cytotoxicity was studied testing cell viability by MTT assay in control or treated cells. The IC50 values for both cell lines were determined by linear regression from dose-response curves.

Based on the detected cytotoxic activity, the effect of the compound on cell apoptosis induction was examined in both cell lines by different methods. 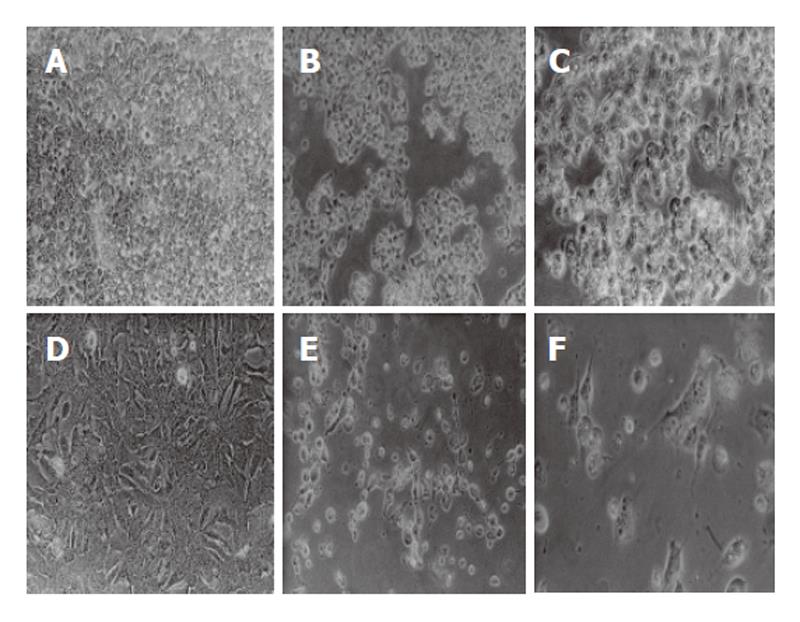 DNA fragmentation, the typical hallmark of apoptosis, was analyzed by DNA laddering on agarose gels and by the appearance of a subdyploid cell population with lower DNA content by flow cytometry. 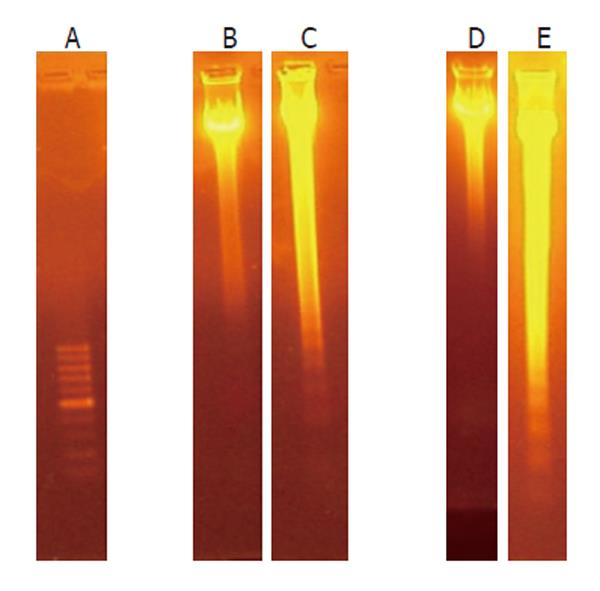 Figure 3 Treatment of HepG2 and Hep3B cells with 5-AR induces the DNA laddering typical of apoptosis. DNA was extracted from control or treated cells and electrophoresed on an agarose gel. Lane A: molecular marker; lane B: control untreated HepG2 cells; lane C: HepG2 cells treated for 24 h with 5-AR IC50; lane D: control untreated Hep3B cells; lane E: Hep3B cells treated for 24 h with 5-AR IC50. Results are from one experiment that is representative of three similar ones. 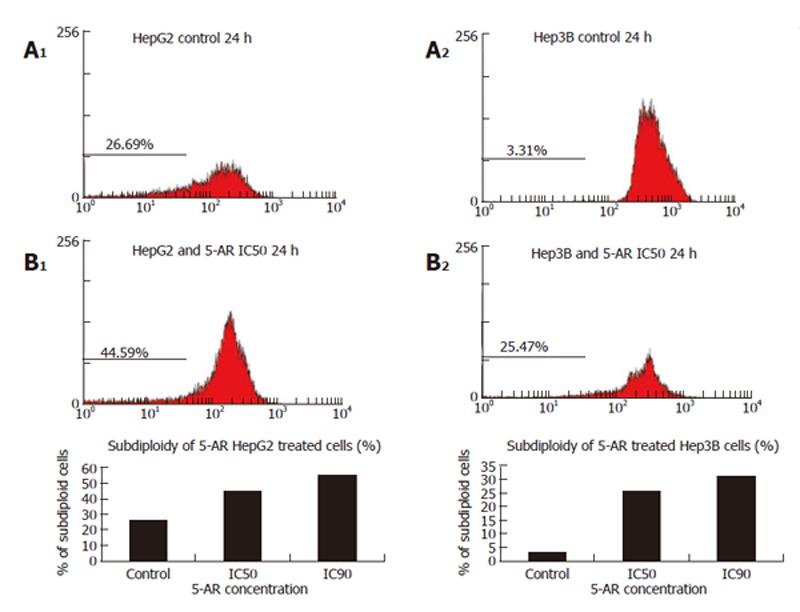 Figure 4 5-AR-treated HepG2 and Hep3B cells showing a subG0 population detected by flow cytometry. Treated or control cells were stained with propidium iodide and analyzed by flow cytometry. Left: (A1) control untreated HepG2 cells, (B1) HepG2 cells treated for 24 h with 5-AR IC50; Right: (A2) control untreated Hep3B cells, (B2) Hep3B cells treated for 24 h with 5-AR IC50. Results are from one experiment that is representative of three similar ones.
Induction of nuclear condensation by 5-AR treatment

Control or 5-AR-treated HepG2 and Hep3B cells were stained with acridine orange and propidium iodide. A significant increase in the percentage of red cells and in condensed and fragmented nuclei were observed in treated cells, all these findings compatible with apoptotic cell death (Figure 5). 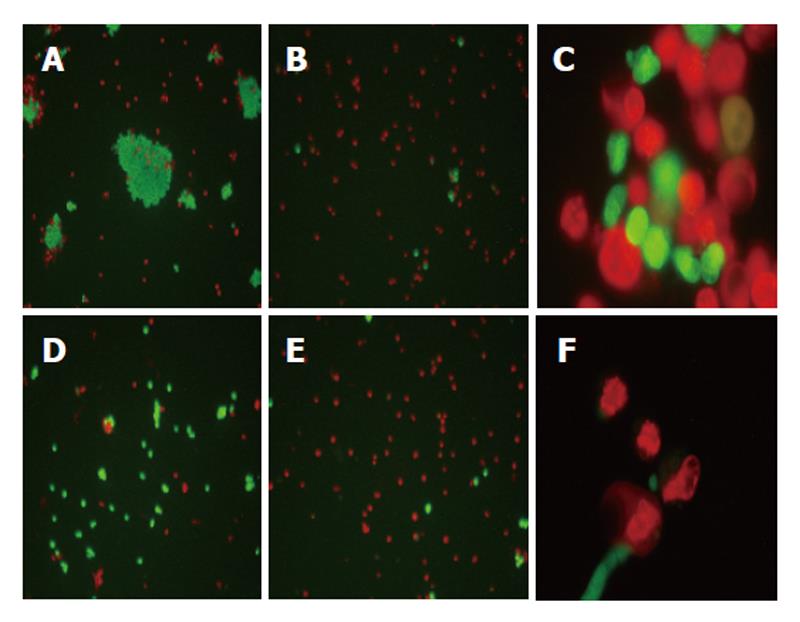 The search for novel anticancer drugs from natural sources has continued through the collaboration of scientists worldwide in looking for new bioactive compounds[12]. Experimental agents derived from natural products offer opportunities to evaluate not only totally new chemical classes of anticancer agents, but also novel and potentially relevant mechanisms of action[13].

With the aim of searching for new cytotoxic compounds from Argentine medicinal plants, a 5-AR was isolated from L. molleoides. The dose-dependent cytotoxic activity detected on many human tumoral cell lines suggested that it may contain some kind of antitumoral activity[10]. Due to the relevance of human hepatocarcinoma and the lack of available successful treatments, human hepatocarcinoma cells were selected to study the 5-AR cytotoxicity and to deepen into the mechanism of cell death induced by this compound.

Apoptotic pathways are involved in the cytotoxic mechanism of antitumoral drugs. Some anticancer drugs are known to upregulate Fas ligand, leading to its interaction with Fas and triggering the apoptotic pathway. On the other hand, p53 exerts its effects on cells as a transcription factor. An increase in p53 leads to the expression of pro-apoptotic proteins, which prompt cells to undergo apoptosis. It has been reported that p53-dependent apoptosis modulates the cytotoxicity of anticancer agents[14].

Considering the importance of Fas and p53 in hepatocyte cell death, two cell lines were selected based on their differential p53 and Fas phenotype. While HepG2 cells exhibit normal expression of both proteins, Hep3B cells present mutated p53 and Fas[15]. In this work, the treatment of HepG2 and Hep3B with IC50 doses of the 5-AR induced apoptosis in both cell lines, as evidenced by all the methodologies used in this work. Experiments with lower concentrations of the compounds also showed apoptosis induction in both cell lines (data not shown).

The fact that 5-AR can induce programmed cell death in Hep3B with non-functional p53[15] and Fas[16] evidences that the cytotoxic effect of 5-AR in this cell line is independent of their p53 or Fas phenotypic profile. As p53 is the most common mutated gene in hepatocellular carcinomas, it is important to have cytotoxic compounds that exert their apoptotic activity in a p53-independent pathway to treat this kind of tumors.

The induction of apoptosis is known to be an efficient strategy for cancer therapy[17]. Recently, many plant extracts have demonstrated to posses the ability of triggering the apoptotic pathway[18,19]. The present study demonstrates that a pure compound isolated from L. molleoides is highly cytotoxic and presents apoptogenic activity on human hepatocarcinoma cell lines. The molecular mechanistic pathway involved in this process will be studied in our future experiments. Our results and the previously reported cytotoxic and antitumoral activities of other alkyl resorcinols justify further in vitro and in vivo studies to evaluate the potential use of this 5-AR as an antitumoral agent for hepatocellular carcinoma.