In this study, a combined ALT and TFL flap was used for reconstructing the abdominal wall defect, achieving excellent functional and aesthetic outcomes.

A 43-year-old male patient was burned by 10 kV high voltage on the left upper limb and in the abdominal wall and was admitted to the Department of Burns and Skin Repair Surgery, Hainan General Hospital.

A 43-year-old male patient suffered from temporary unconsciousness after a 10-kV high-voltage electric shock on June 17, 2018. He had no history of falls from a height or incontinence. He was transferred to the local hospital for disinfection, wound dressing, and fluid transfusion. However, due to disease progression, he was transferred to the Department of Burns and Skin Repair Surgery, Hainan General Hospital, 8 h after the incident.

The physical examination at admission indicated a pulse of 69 beats/min and blood pressure of 134/99 mmHg. The patient had a pale face but was conscious and could answer simple questions. He had abdominal and rebound tenderness. The burned areas involved the middle abdomen and the left upper limb. The involved abdominal skin measured 18 cm × 15 cm. Full-thickness abdominal wall defects (5 cm × 2 cm, portrait) were noted 2 cm above the umbilicus, with carbonized marginal tissues and exposed blackened bowels (Figure 1A). Regarding the left upper limb injury, most skins were carbonized, the muscles were necrotic, arteries and veins were embolized, ulnar and radial arterial pulses disappeared, cyanosis was present, and the skin temperature significantly decreased. 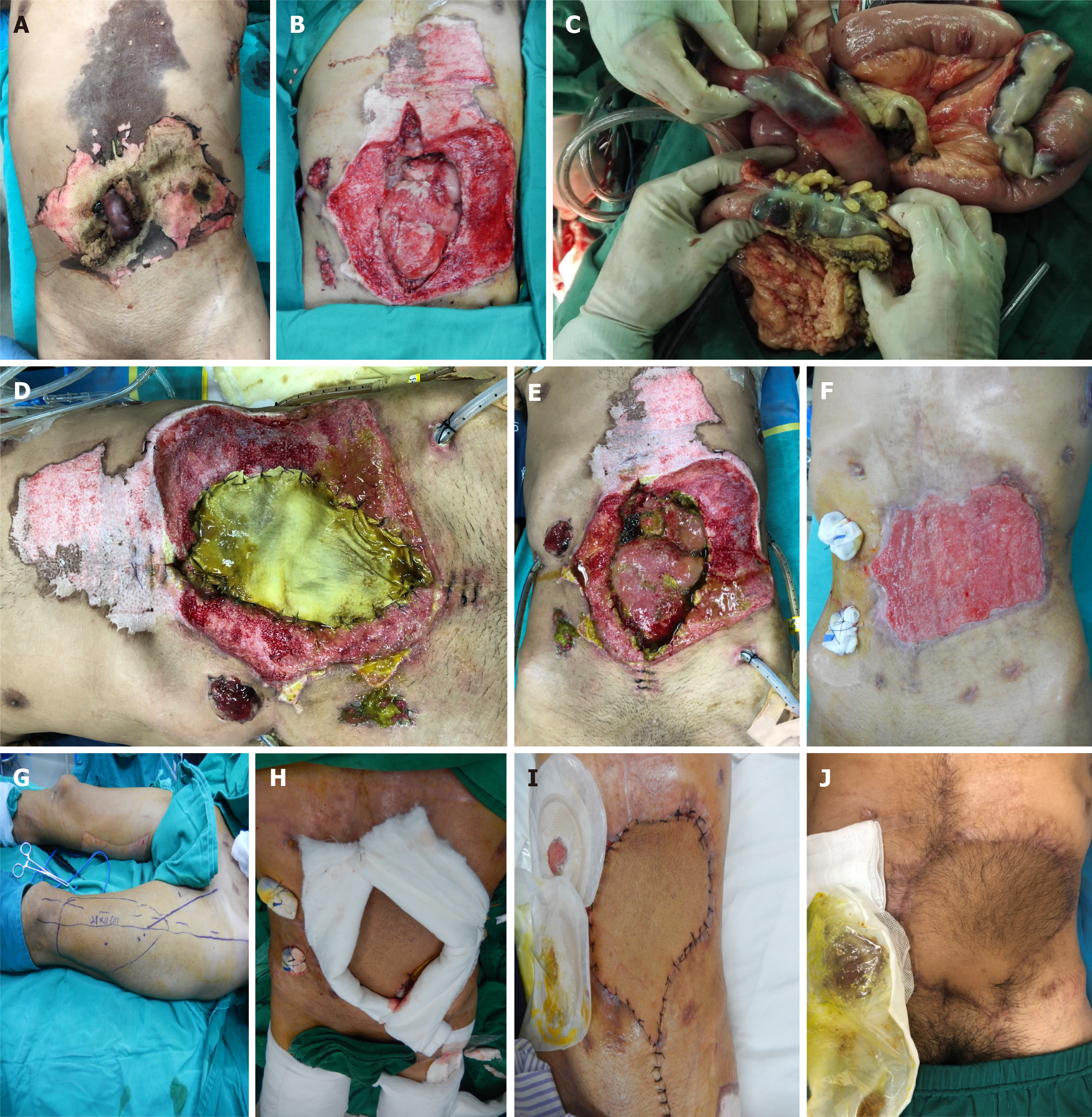 Given the patient’s history and condition, osteofascial compartment syndrome of the left upper limb and abdominal wall defects complicated with bowel necrosis were preliminarily considered. After preoperative preparation for 1 h, an emergency surgery, combining the open amputation of the upper left upper limb, debridement for the abdominal burns, and exploratory laparotomy, was performed. The intraoperative findings showed full-thickness abdominal wall defects, measuring 18 cm × 15 cm (Figure 1B) after escharotomy. Large amounts of fecal water-like liquid and bowel fluid were found in the abdominal cavity. Partial necrosis of the transverse colon and necrosis of multiple bowel segments were also observed (Figure 1C). After resection of the necrotic bowels, end-to-end anastomosis was performed. The necrotic greater omentum was resected, and double-barrel terminal ileostomy was performed in the right lower abdomen. Normal saline and Anerdian III were used to thoroughly clean the abdominal cavity. Multiple silicone drainage tubes were placed in the pelvic floor, greater curvature of the stomach, anterior right subhepatic space, and left iliac fossa. The abdominal wall defects and bowels were covered with the acellular dermal matrix (ADM). Vacuum sealing drainage (VSD) was also used to cover the wound for temporary abdomen closure. After the surgery, measures such as anti-infective treatment, total parenteral nutrition (TPN), and continuous negative-pressure drainage of the wound were given, and the patient’s vital signs were stable. Five days after the exploratory laparotomy, the patient experienced abdominal pain; yellow-green fluids were drained out from the tube, and the negative-pressure materials were also dyed in yellow-green. Thus, another exploratory laparotomy was performed, revealing a duodenal leak, which was repaired. Two days after the leak repair, the oozing and leakage of the yellow-green duodenal fluids were still observed. The temporary closure was continued with ADM, VSD, and continuous negative-pressure drainage. The ADM and VSD materials were changed every 7-10 d (Figure 1D and E). Treatments such as gastrointestinal decompression, TPN, anti-infection, and symptomatic treatments were given while the duodenal fistula was healed 6 wk after the repair of the duodenal leak. Within this 6 wk period, dense granulation tissue grew on the serosal surface of the exposed bowel walls, forming a plate-like adhesive barrier that completely enclosed the abdominal cavity (Figure 1F). Hence, a left ALT flap measuring approximately 21 cm × 16 cm (Figure 1G) was designed for the repair. While harvesting, the TFL was included. The flap arteries and veins were anastomosed with the inferior epigastric artery and vein under a microscope to restore the abdominal wall integrity (Figure 1H and I). The patient was discharged 2 wk after the abdominal wall repair. He was followed every 2-3 mo for 1 year.

The patient was followed every 2-3 mo for 1 year. At the last follow-up in June 2019, the patient had no complications such as abdominal wall ulcer, abdominal wall hernia (Figure 1J), bowel obstruction, or bowel fistula.

Justo et al[8] used allogeneic abdominal wall tissue grafting to treat huge abdominal wall defects. Despite some successful cases, risks of infectious diseases, immune rejection, and other problems, including lack of donors and ethics, remain. For the treatment of huge full-thickness abdominal wall defects, autologous flap repair has become a good choice[4-6]. Autologous flaps come from the same individual and match all the requirements of ideal repair material. Therefore, a combined ALT and TFL flap was used to repair the huge full-thickness abdominal wall defect in the present case. It turned out to be a good choice, resulting in excellent outcomes and avoiding problems such as infectious diseases, immune rejection, and lack of donors or ethics.

Chou et al[3] believed that an ALT flap was increasingly popular because of its large harvest size, low donor site complications, versatile applications, and ease of harvest. During the surgery, two groups of surgeons could simultaneously perform ALT flap harvest and repair of the abdominal wall defect separately while the patient was placed in the supine position. This meant shorter operating time and no need to change patient position. Compared with the latissimus dorsi flap that required a change in the patient position[2], the ALT flap was superior in abdominal wall repair. In the present case, the surgeons designed a left-side ALT flap harvest with a size of 21 cm × 16 cm, including the TFL flap. The flap arteries and veins were anastomosed with the inferior epigastric artery and vein to restore the abdominal wall integrity, and skin graft repair was done after the wound size was reduced due to the shrunk donor area. Hence, not only the skin and fascia defects but also the muscular defects were repaired using TFL. Caliceti et al[9] believed that the harvest of an ALT flap with skin or muscle in a large size made the ALT flap an ideal flap for three-dimensional reconstruction. A combined ALT and TFL flap had an abundant blood supply and a strong anti-infective function, thus avoiding foreign body retention or severe infections related to mesh repair. The TFL flap had adequate strength and tension, enabling its functioning as muscles of the abdominal wall. This further strengthened the abdominal wall and avoided the occurrence of abdominal hernia postoperatively. During the 1-year follow-up of the patient, no abdominal hernia was found. Compared with pedicled flaps, a combined ALT and TFL free flap could repair any abdominal defects and avoid the restraints of space.

Delayed repair of abdominal wall defects due to electrical burns is reliable. This is because electrical burns of the abdomen not only involve skin necrosis but also damage the deep fascia, muscles, peritoneum, or even abdominal organs; the condition is often characterized by progressive necrosis. Therefore, temporary closure is required after early debridement. Also, the reconstruction of the abdominal wall should be performed only after necrosis goes away and stable gastrointestinal, liver, and kidney functions are achieved through proactive treatments. Maloney et al[1] suggested VSD-assisted delayed reconstruction for patients with severely contaminated abdominal wall defects, which was similar to the proposed method. Prior to the repair of abdominal defects, TAC with suitable material was required to avoid bulge of the bowel, bowel edema, abdominal infection, and other complications. ADM is a novel biomaterial with good tissue compatibility, no immunogenicity, and a certain degree of strength. Hence, it is a preferred material for TAC. Continuous VSD-assisted drainage helps control infection, promotes granulation tissue growth, and avoids retraction of the abdominal wall. This further enhances the repair of the abdominal wall and prevents the bulge of the bowels. However, VSD cannot be in direct contact with the abdominal organs. Greater omentum or an ADM layer is required to avoid organ damages. The combined use of ADM and VSD greatly protected the abdominal organs, effectively drained the bowel fluids, accelerated infection control, promoted granulation tissue growth, and fully prepared for the repair and reconstruction of the abdominal wall defects using the ALT flap.

Satisfactory functional and aesthetic effects were achieved following the abdominal wall repair. However, severe bowel adhesions remained in the abdominal cavity, making intra-abdominal surgery impossible for the patient. Therefore, no closure of ileostomy was done for the patient, and he had to live with an ileostomy bag for a long time. More clinical studies should be performed in the future to provide solution to the aforementioned problem.