Ankylosing spondylitis (AS) is a systematic and rheumatic disease, which causes multiple symptoms. However, dysphagia due to the formation of a giant anterior cervical osteophyte is rare in patients with AS.

We present the case of a 65-year-old male patient who was diagnosed with AS and visited the hospital with a complaint of progressive dysphagia. The appropriate imaging examinations indicated that a giant anterior cervical osteo-phyte at C3-4 caused esophageal compression, which led to dysphagia. An operation for resection was performed without complications.

This case demonstrates that a large cervical osteophyte may be the cause of dysphagia in patients with AS, and early accurate diagnosis and surgical treat-ment are very important for the improvement of symptoms. Anterior cervical discectomy and fusion are extremely effective and should be taken into consideration.

Core Tip: Ankylosing spondylitis (AS) is a systematic and rheumatic disease, which causes multiple symptoms. However, dysphagia is rare in patients with AS. We present the case of a 65-year-old male patient who was diagnosed with AS and visited the hospital with a complaint of progressive dysphagia. The appropriate imaging examinations indicated that a giant anterior cervical osteophyte at C3-4 caused esophageal compression, which led to dysphagia. An operation called anterior cervical discectomy and fusion was performed without complications. This case demonstrates that early accurate diagnosis and surgical treatment are very important for the improvement of symptoms.

Ankylosing spondylitis (AS) is a chronic systemic, inflammatory and rheumatic disease that primarily affects the sacroiliac joints and the skeleton; concurrently, AS frequently involves other extra-articular clinical symptoms including peripheral arthritis, pericarditis, pulmonary fibrosis, and symptoms involving other organ systems[1].

Thus, we present a case of extrinsic dysphagia caused by esophageal compression due to a large cervical osteophyte that is secondary to AS.

A 65-year-old male patient was referred to our clinic with a complaint of progressive dysphagia.

The patient had difficulty eating solid food for 2 years. For the last 6 mo, he suffered from severe dysphagia while swallowing solid and liquid food. This was accompanied by slight dyspnea.

The patient did not have a history of trauma to the neck and reported not having cough or pain while swallowing; however, he lost 4 kg in body weight in the last 6 mo. Moreover, the patient had a medical history of AS for 6 years and did not have diabetes or metabolic syndrome.

The patient had no family history of AS.

The physical examination findings showed dorsal kyphosis, limited cervical motion in all directions, and positive neck tenderness. The patient had no neurological signs in the upper or lower limbs. The Hoffman sign was negative bilaterally. The extremity muscle strength and sensation findings were normal.

The laboratory examination findings showed that he was positive for human leukocyte antigen B27 (HLA-B27) but negative for antinuclear antibody and rheumatoid factors. Other blood test results, including blood cell count, C-reactive protein and erythrocyte sedimentation rate, were normal.

The patient underwent laryngoscopy, which revealed esophageal compression without mass lesions in the esophagus. He underwent a cervical X-ray (Figure 1), which showed fusion between the C4-C7 corpuses with prominent osteophyte formation anteriorly on the left at the C3-4 level. A bamboo spine appearance was detected with simple thoracolumbar radiography (Figure 2). A computed tomography (CT) scan (Figure 3A and B) revealed apparent osteophytes and arthritic facet joints. Magnetic resonance imaging (MRI) (Figure 4A and B) demonstrated giant anterior osteophyte hyperplasia of the cervical vertebral body, leading to compression of the esophagus and dysphagia. At the same time, hypertrophy of the posterior longitudinal ligament and yellow ligament at the C3-4 level caused compression of the spinal cord. 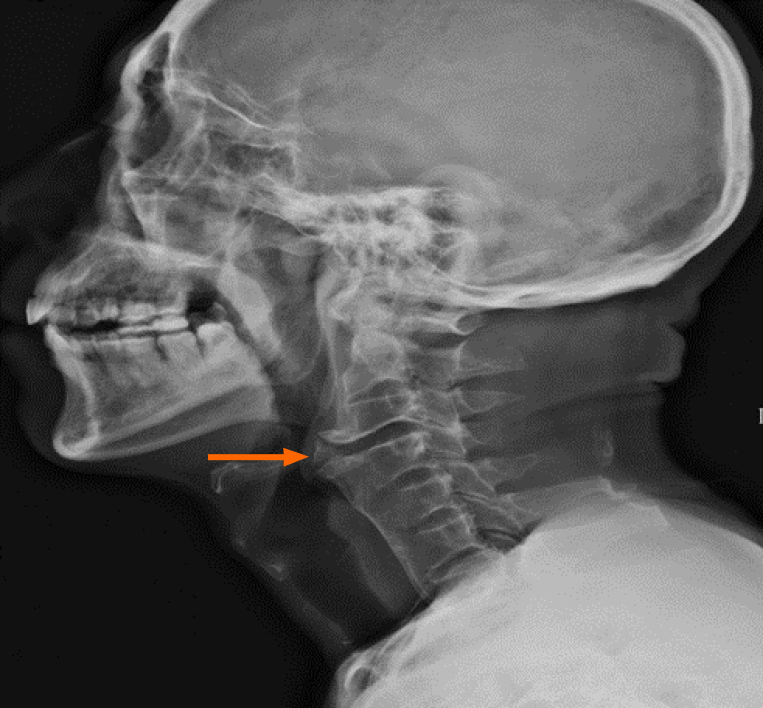 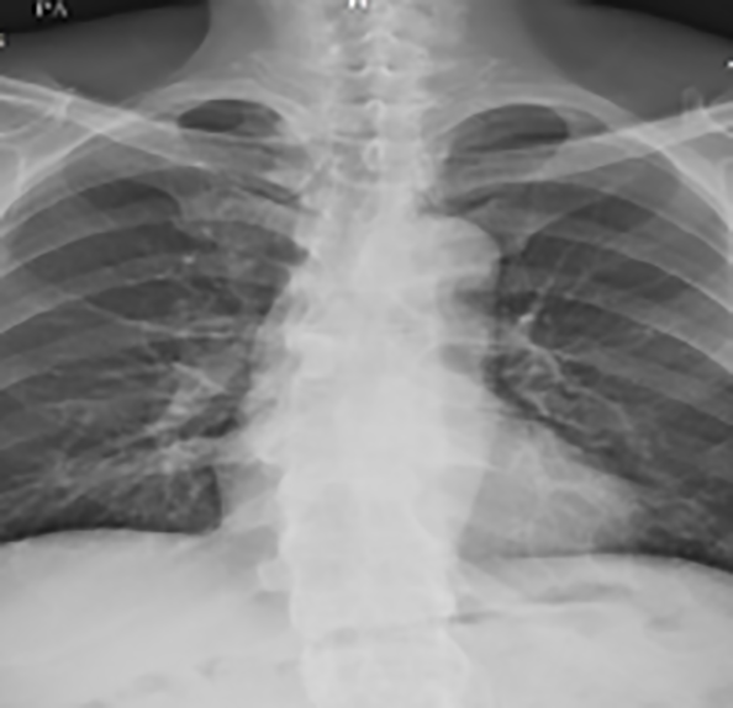 The final diagnosis of the presented case was esophageal compressed type cervical spondylosis.

After an orthopedic surgeon was consulted, anterior cervical discectomy and fusion (ACDF) for osteophyte excision via the anterolateral approach in the neck was proposed, and the patient agreed to undergo this operation.

Then, a thick osteophyte was identified and cleared by rongeurs (Figure 5A and B), its complete removal was confirmed by X-ray 1 d after the operation (Figure 6A). Moreover, there were no complications, including dysphonia or surgical site infection, and the patient was discharged 48 h after the operation. He indicated that the preoperative symptoms, such as dysphagia, disappeared and that he was able to return to his normal diet 1 mo after the surgery (Figure 6B), he was satisfied with the degree of postoperative improvement.

Figure 5 Pictures during the surgery. A and B: Giant anterior cervical osteophyte.

Figure 6 Patient's postoperative X-ray examinations. A: Lateral radiograph of cervical spine 1 d after operation; B: At 1 mo after operation, indicating the follow-up of patients in different time periods after surgery.
DISCUSSION

AS is a systematic, inflammatory and rheumatic disease that mainly affects the spine, sacroiliac joints and peripheral joints. HLA-B27 plays an important role in AS pathogenesis, and it can be detected in most cases; it is regarded as a specific indicator for but not necessarily required for the diagnosis of AS[3]. In our case study, the patient was positive for HLA-B27. The symptoms were consistent with his 6-year history of AS, in addition to the physical and imaging examination findings.

Restricted spinal motion is frequently observed in patients with AS, especially in the cervical vertebrae. However, difficulty swallowing is rarely a symptom of AS. Moreover, dysphagia associated with cervical vertebral disease is usually observed in diffuse idiopathic skeletal hyperostosis (DISH) but is rarely related to AS with cervical spine involvement[4,5]. Therefore, it is necessary to distinguish the difference between DISH and AS.

DISH, also known as Forestier’s disease, is a non-inflammatory condition characterized by the calcification and ossification of soft tissues, mainly ligaments, and ehthesis[6]. However, there are currently no widely accepted criteria for the diagnosis of DISH, and it is still detected radiologically. Resnick et al[7] reported the radiographic and pathologic features of DISH and established diagnostic criteria that are now commonly used, including the involvement of at least four contiguous vertebrae, the preservation of the intervertebral disc space, and the absence of apophyseal joints or sacroiliac inflammatory changes. In our case study, the patient had AS with bilateral sacroiliitis and only one osteophyte at the C3-4 level according to the CT/MRI findings but did not satisfy the DISH criteria. Moreover, the histological outcomes of this case indicate obvious inflammatory reactions in the ossification tissues, which supports the diagnosis of AS. Thus, the symptom of dysphagia in this patient is attributed to esophageal compression due to a giant anterior cervical osteophyte that is secondary to AS but not DISH.

Usually, the mechanisms involved in the generation of dysphagia vary greatly, among which mechanical compression causing an inflammatory reaction leading to esophageal obstruction, as observed in our study, is rare. In most cases, patients with mild or moderate dysphagia choose to undergo conservative therapy, such as diet modification, antibiotics, anti-inflammatory drugs and steroids, for symptom relief[8]. In a previous study, anterior cervical ossification formation was not inhibited in a 37-year-old elderly white presenting with dysphagia and a 12-year history of AS, although he was treated with tumor necrosis factor-αinhibitors for the last 6 years[9]. The patient’s dysphagia was also caused by osteophytes on the anterior cervical vertebrae, which originated from AS, and drugs did not work to some extent.

Thus, conservative treatments are beneficial for some patients. However, it is unwise for people with severe symptoms, especially dysphagia, to undergo conservative treatment only, even if recommended by a doctor, as it can affect their quality of life. A previous case study reported that a 48-year-old male with AS suffered from progressive dysphagia to soft foods and liquids for several years[5]. A surgical operation for the resection of the osteophyte was proposed by his surgeon, while the patient refused. As a result, after 6 mo, there was no improvement in dysphagia, and his health worsened. In contrast, another 73-year-old male patient with extrinsic esophageal dysphagia underwent an operation that was performed to resect a thick osteophyte using a chisel without internal fixation, and he claimed he did not have any difficulty swallowing after surgery[10]. As in our study, the patient underwent ACDF surgery, which was a minimally invasive surgery assisted by a microscope. Its advantage was that decompression from the front of cervical spine was more direct and thorough, and the effect was very obvious. In addition to the large osteophyte being removed, an internal fixation and fusion were placed to maintain normal physiological functions and enhance the stability of the cervical spine. In addition, the ACDF surgery has shorter recovery time, smaller wounds, fewer complications and more convenient intraoperative operations than the method of simply removing osteophytes. As expected, the effect was proven shortly thereafter, as he visited our clinic for a postoperative review 1 mo after being discharged from the hospital. Later, the patient was able to return to a normal diet basically 3 mo after surgery.

In conclusion, anterior cervical osteophytes rarely lead to dysphagia, even in patients with AS. Thus, the early diagnosis of AS and detection of osteophyte formation seem particularly significant. Some imaging examinations are necessary for the detection and diagnosis of the disease. In addition, surgical excision of giant osteophytes should be taken into consideration to relieve symptoms and restore digestive function in patients for whom conservative treatment has no effect. ACDF is extremely effective and a beneficial choice for patients.

The authors would like to acknowledge the assistance of Zhang F and Zhang KY in the preparation of this article.