Here, we report the case of a 22-year-old woman who presented with a 3 mo history of progressive abdominal distension and a hypervascular abdominopelvic mass. Due to a high serum concentration of CA125, the preoperative diagnosis was unclear. During surgery, 5 L of ascites was removed. An 18.8 cm solid mass, which was pedunculated from the uterine fundus and exhibited complex adhesion to the greater omentum, was removed. The CA125 level was reduced postoperatively, and a pathologic study confirmed that the mass was a leiomyoma that originated in the uterus.

Uterine leiomyoma can share vessels with the greater omentum. This case highlights the difficulty of diagnosing pseudo-Meigs syndrome and the importance of imaging and laboratory examinations.

Core Tip: We report a case of uterine leiomyoma of the greater omentum with a high serum concentration of CA125 and pseudo-Meigs syndrome. It is rarely seen in this condition. Upon entering the abdomen, up to 5000 mL of yellow ascites was removed by suction. A large solid cystic neoplasm that measured almost 20 cm was found and diagnosed as leiomyoma pathologically later.

A 22-year-old woman presented to the outpatient unit with abdominal pain.

The patient was not married and had never been pregnant. She reported no recent trauma, fall, or sexual intercourse. She reported a normal menstrual cycle with a menstrual period 18 d prior to her visit. The patient also reported a 3 mo history of increased abdominal circumference, which she considered a “pot belly”.

A review of systems was notable for findings of abdominal pain and a lack of appetite, but the woman denied clinical indications of constipation, diarrhea, vaginal bleeding, nausea, emesis, or urinary urgency or frequency.

The abdomen was gravid, soft, and firm. A rectovaginal examination revealed a movable mass at the front of the uterus.

The patient’s laboratory test results are shown in Table 1. Unexpectedly, the CA125 level was elevated to 569.5 U/mL.

Computed tomography (CT) of the pelvis was performed after administration of an intravenous contrast agent (Figure 1), and magnetic resonance imaging (MRI) (data not shown) revealed a large mass with a maximum cross-section of 18.8 cm × 13.5 cm. Massive abdominal edema was also recorded. No evidence of swollen lymph nodes was found. Computed tomography angiography (CTA) revealed an abundant blood supply to the mass, which was provided by the uterine artery, superior mesenteric artery, and predominantly, by the gastroduodenal artery (Figure 2). 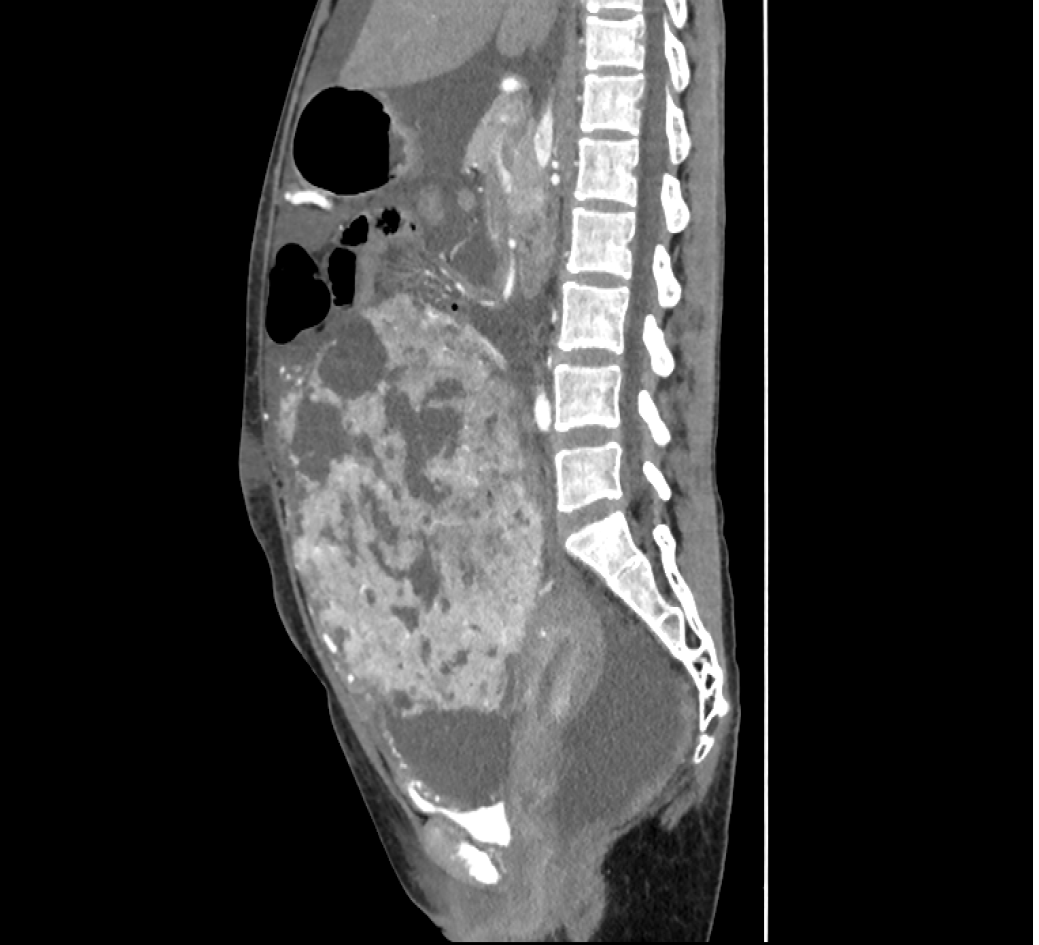 Figure 1 Enhanced computed tomography of the abdomen/pelvis showing a large preperitoneal mass joined to the uterus. 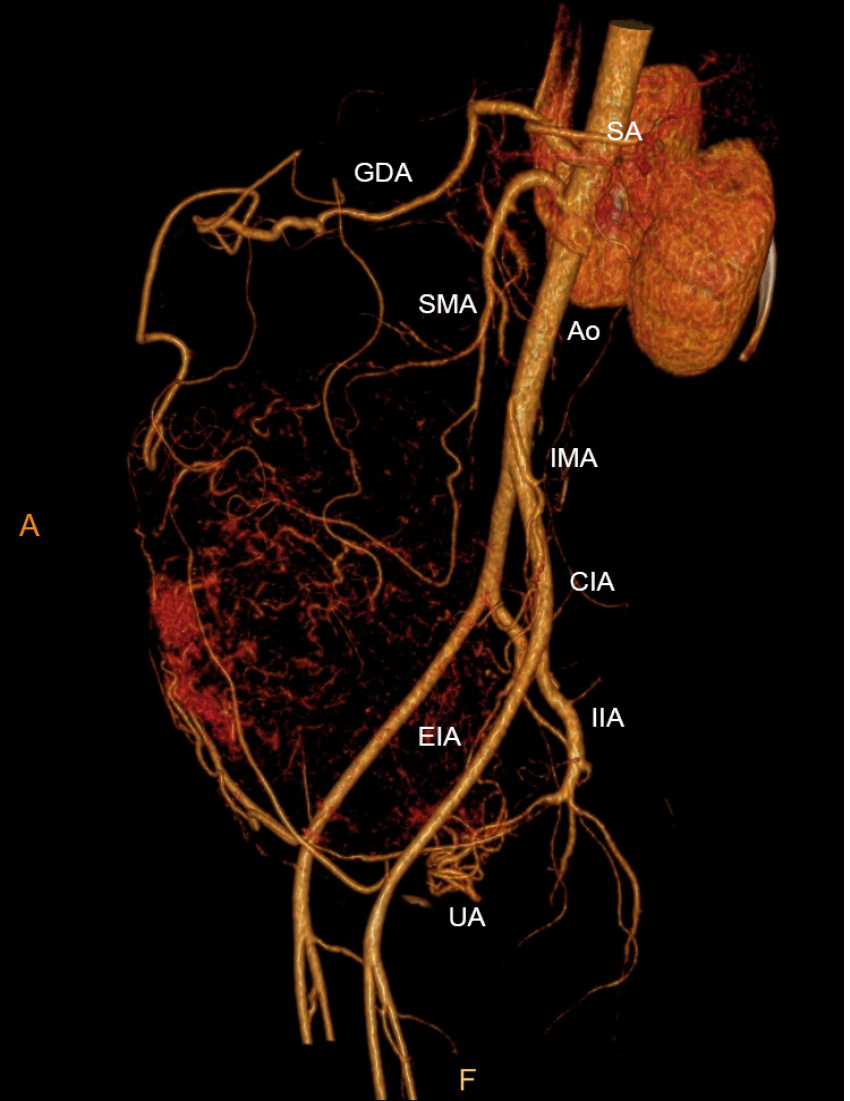 The mass was determined to be a uterine-derived leiomyoma that had implanted on the omentum majus.

The patient underwent abdominal aortic balloon catheter placement in case of hemorrhage and later underwent exploratory laparotomy under combined spinal–epidural anesthesia. Upon entering the abdomen, up to 5000 mL of yellow ascites was removed by suction (Figure 3A). Ascitic fluid cytology revealed aggregated cells with inconspicuous atypia. A large solid cystic neoplasm that measured almost 20 cm was also found (Figure 3B). In addition, careful inspection after ligation of the omental vessels showed that the omental fat had vanished and that vessels from the greater omentum, which were shared with the mass, were engorged. Adhesions between the mass and the ileocecum, appendix, and descending colon were observed. The mass was found to be attached to the uterine fundus by a 3-cm-wide pedicle (Figure 3C). Resection of the mass and appendix was then performed (Figure 3D), and during surgery, the total blood loss was 1200 mL. 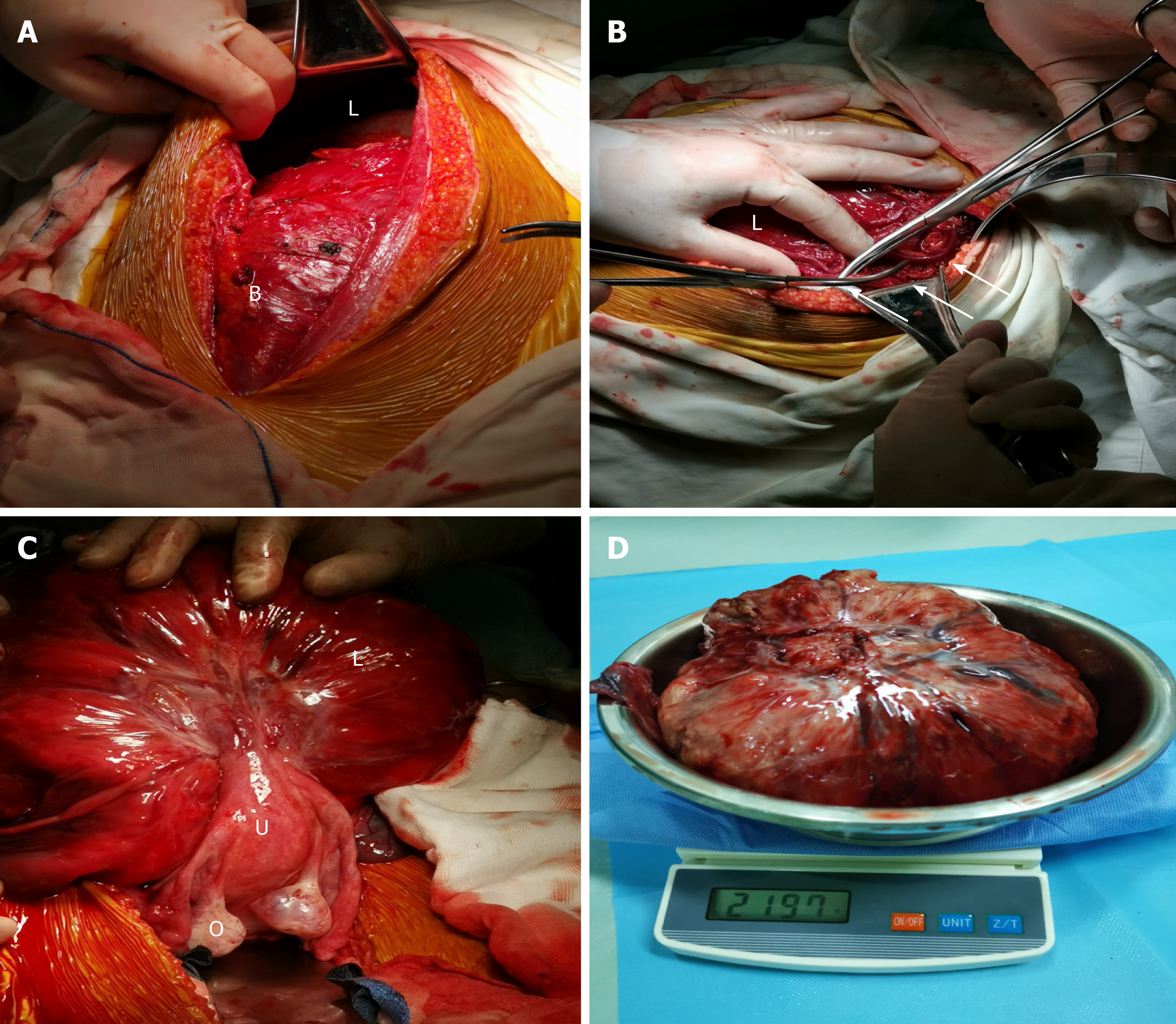 Figure 3 Intraoperative findings. A: Bladder with a dense adhesion and the mass, which extended 3 cm below the umbilicus; B: Engorged vessels of the omentum majus that appeared along the surface of the mass; C: Lifted and turned mass showing a pedicle attached to the uterine fundus; D: Resected mass along with its pedicle stump.
OUTCOME AND FOLLOW-UP

The patient was transferred to recovery in a stable condition, and on postoperative day 8, she was discharged from the hospital.

A pathologic study of the specimen confirmed a diagnosis of leiomyoma. Hydropic degeneration, hyaline degeneration, and cystic degeneration were recorded. An immunohistochemical analysis showed that the leiomyoma cells were positive for progesterone receptor, estrogen receptor, h-caldesmon, and smooth muscle actin (Figure 4). The tissue was negative for CD10, CD117, HMB45, Dog-1, and Ki67. The mass was determined to be a uterine-derived leiomyoma that had implanted on the omentum majus. 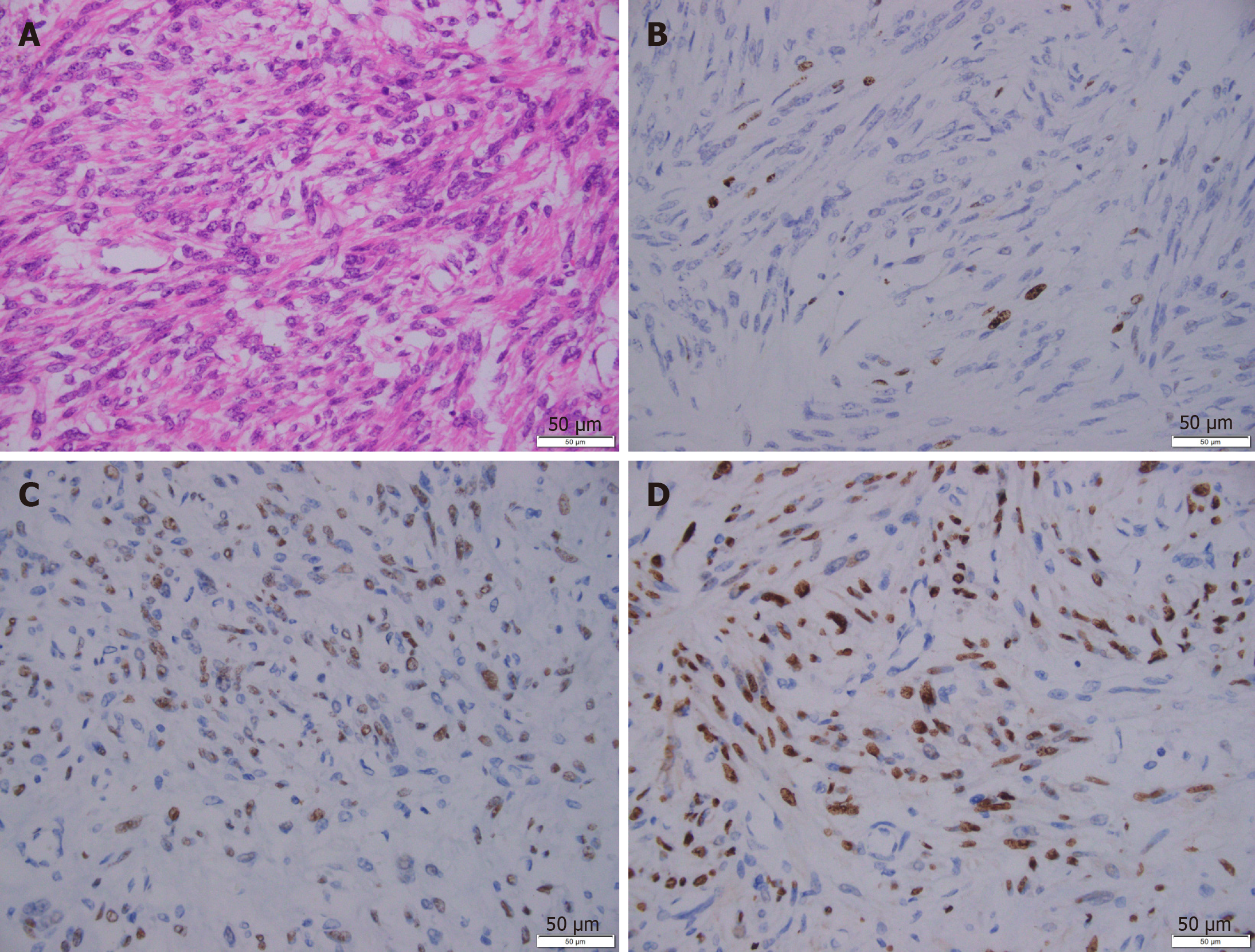 The unique features of the presented case can be summarized as follows: A massive leiomyoma with the “digested” greater omentum and an elevated CA125 level accompanied by pseudo-Meigs syndrome. Uterine leiomyoma is the most common benign gynecological neoplasm[16]. However, elevated CA125 levels, a massive leiomyoma, and large ascites, which are collectively known as pseudo-Meigs syndrome, are rarely seen in this condition[11-14,17-20]. In addition, no agreement on the pathogenesis of this rare condition has been established.

In this case, the increased abdominal circumference was considered to have resulted from pleural effusion and ascites. The pathogenesis of ascites in pseudo-Meigs syndrome is still not well defined[21]. According to several hypotheses, the release of inflammatory cytokines and growth factors may cause vascular permeability[22-24]. An imbalance among arterial flow, venous drainage, and direct pressure of the mass itself on lymphatic vessels may have caused the accumulation of nearly 5 L of ascites fluid in this case[25].

Removal of the large leiomyoma could resolve the ascites, but it is difficult to perform a complete excision when a leiomyoma is broadly adhered to adjacent structures. Full preparation, including detailed information about the size of the mass and its properties, could help in the design of a better surgical strategy[26]. Specifically, various imaging techniques, including CT and MRI, were used in this case, and both modalities indicated an 18-cm mass with abdominal edema.

CTA confirmed an abundant blood supply to the mass. During the surgery, distended blood vessels from the omentum (top), uterus (bottom), and colon (lateral) were observed and carefully ligated. Notably, the uterovesical peritoneal reflection was lifted, which was evidently due to the massive leiomyoma. Thus, preparations should have been made to reduce the risk of injury and to prevent uncontrolled bleeding or incomplete resection. Therefore, we performed abdominal aortic balloon catheter placement before surgery[27].

The elevated CA125 level is another complicating factor in this case. It is well known that as a high molecular weight glycoprotein, CA125 is expressed in a substantial proportion of ovarian cancers[28]. It has been reported that the serum CA125 levels range from 20 to over 1000 IU/mL in patients with leiomyomas[29-31]. Due to the significant overlap between malignancies and myomas, CA125 failed to provide a potential benefit for differential diagnosis[32]. The destruction of the peritoneum and severe adhesions of the omentum could explain why CA125 was overexpressed before surgery and reduced after surgery[33,34].

A preoperative diagnosis of a pelvic mass with pseudo-Meigs syndrome remains very challenging, especially in cases such as the one presented in this study. In these cases, an accurate diagnosis may only be made after surgery. For oncological safety, patients with myomas may undergo hysterectomy or ovariectomy, which impairs reproductive function. On the contrary, an overly optimistic presumption of a benign leiomyoma may lead to the intra-abdominal spread of an unexpected sarcoma, which could result in poor survival. Therefore, it is always important to consider a broad differential diagnosis and employ the necessary scrutiny using imaging techniques. Uterine sarcomas are rare gynecological neoplasms, and some researchers believe that sarcomas originate from benign leiomyomas because they contain the same epithelial progenitor cells[35]. Currently, no diagnostic technique is available to accurately distinguish this neoplasm. A meta-analysis revealed that the expression of CA125, lactate dehydrogenase (LDH), and GDF-15 proteins is altered in sarcomas and that their serum levels are statistically higher[35]. In our case, the CA125 level was elevated. However, we interpreted this finding and believed that the higher level was due to the implantation of the leiomyoma on the omentum rather than as a cancer-related signal. Deficiency of LDH and GDF-15 levels was not assessed in our case. In addition, MRI may help in the preoperative distinction of sarcomas from benign leiomyomas[36]. In our case, MRI revealed no swollen lymph nodes. However, the abundant blood supply to the mass observed on CTA imaging still roused our suspicion of a malignancy. Adenomyosis is another differential diagnosis of leiomyoma. A recent study has shown that MRI and elevated CA125 levels are fairly accurate for the diagnosis of adenomyosis, with a high sensitivity and specificity[29]. A mean serum CA125 level of 19 U/mL has been established as the cutoff value. We speculated that this cutoff did not apply to our case because of the size of the mass and the tight adhesion. Preoperative MRI revealed a suspected abdominopelvic mass with large ascites, which did not support the diagnosis of adenomyosis.

In conclusion, we have presented an unusual case of pseudo-Meigs syndrome with a uterine leiomyoma and an elevated CA125 level. CTA was used for the detection and ligation of the parasitic blood supply (in this case, mainly the blood vessels of the greater omentum). Surgeons should be aware of the malignant potential of this tumor and plan for the optimal surgical procedure, which would lead to a more appropriate treatment strategy.