Pigmented villonodular synovitis (PVNS) is an uncommon disease that usually occurs in large joints, and involvement of the subtalar joint is rare. The lack of comprehensive knowledge of subtalar joint PVNS could lead to misdiagnosis.

We present a 64-year-old woman who, at her first visit, complained of discomfort in the right ankle when she walked. Based on the physical signs and X-ray report, the physician failed to make the suspected diagnosis of PVNS. Eighteen months later, the patient returned with a complaint of a mass in her right lateral malleolus with intermittent blunt pain. The X-ray presented an osteophyte formation and soft tissue calcification at the margin of the subtalar joint. The laboratory tests were normal, whereas magnetic resonance imaging (MRI) showed a low-intensity area on both T1- and T2-weighted images. A suspected diagnosis of PVNS was made and later confirmed by postoperative pathology. Subsequently, the patient received radiotherapy with 32 Gy in 16 fractions. At 6 mo postoperatively, the patient only complained of discomfort after walking three blocks. The American Orthopedic Foot and Ankle Society Ankle–Hindfoot score was 97.

MRI is necessary for the diagnosis of PVNS. Early soft tissue calcification and painless joint swelling should be of concern.

Core Tip: Diffuse subtalar joint pigmented villonodular synovitis (PVNS) is a rare disease that can potentially cause bone and cartilage lesions if misdiagnosed at an early stage. Magnetic resonance imaging should be recommended if a physician is suspicious of PVNS. We present a case of misdiagnosed PVNS to improve our understanding of the early characteristics of diffuse subtalar joint PVNS.

Pigmented villonodular synovitis (PVNS), also called tenosynovial giant cell tumor (TGCT), is an uncommon proliferative disease with an uncertain etiology. It usually occurs in middle-aged people[1]. Almost less than two cases per million population are diagnosed each year. The diffuse type of PVNS is predominant, usually causing soft tissue, bone, or cartilage lesions. PVNS usually occurs in large joints including the knee, hip, ankle, elbow and hand, and subtalar joint involvement in PVNS is rare. A lack of comprehensive knowledge of subtalar joint PVNS can lead to misdiagnosis, which may cause bone and cartilage lesions.

A 64-year-old woman complained of a growing mass in her right lateral malleolus with intermittent blunt pain.

The growing mass in the right lateral malleolus lasted for > 12 mo, with intermittent blunt pain during the daytime for 3 mo.

The patient had no history of ankle trauma or surgery.

The patient had no previous or family history of similar illnesses.

A soft movable mass was palpated at the posterior lower margin of the right lateral malleolus tip, without symptoms of redness, erythema and drainage (Figure 1); however, deeper palpation of the mass triggered severe blunt pain. 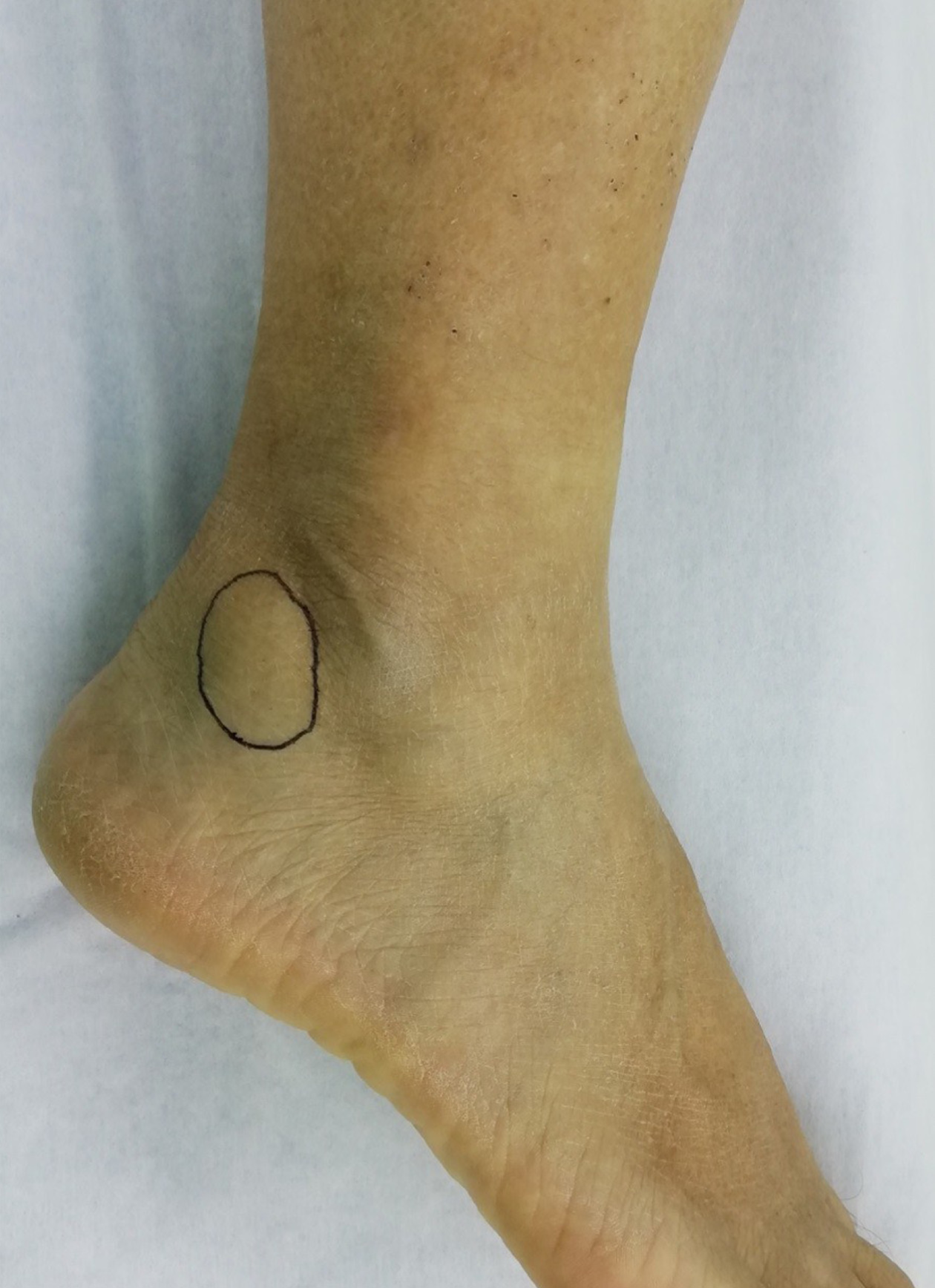 X-ray and magnetic resonance imaging (MRI) of the right ankle were taken. The X-ray presented an osteophyte formation at the posterior margin of the subtalar joint and irregular soft tissue calcification (Figure 2A), whereas MRI showed a mass of low-intensity on both T1- and T2-weighted imaging protruding from the posterior margin of the subtalar joint into the soft tissue, with mild cartilage erosion (Figure 3). 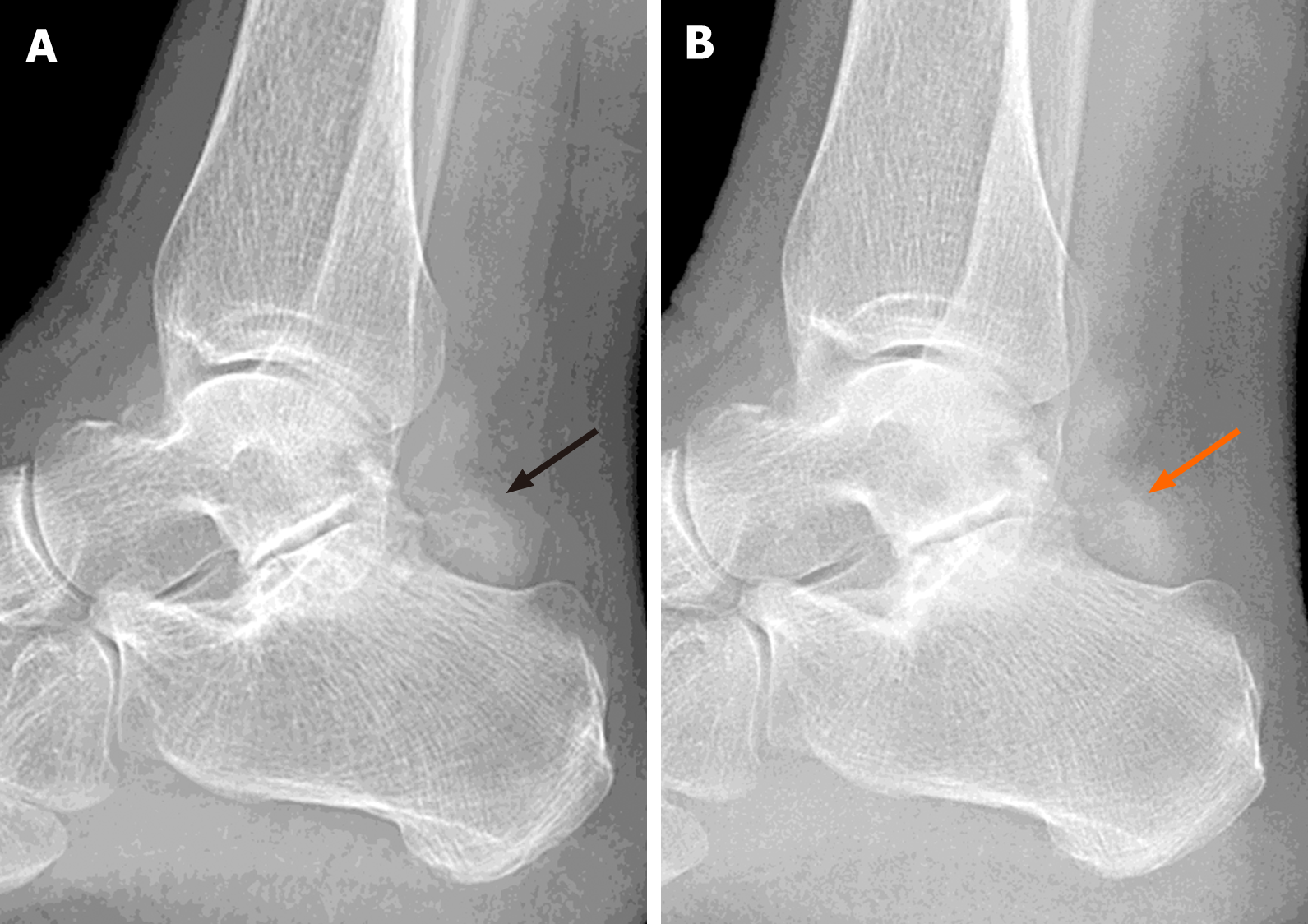 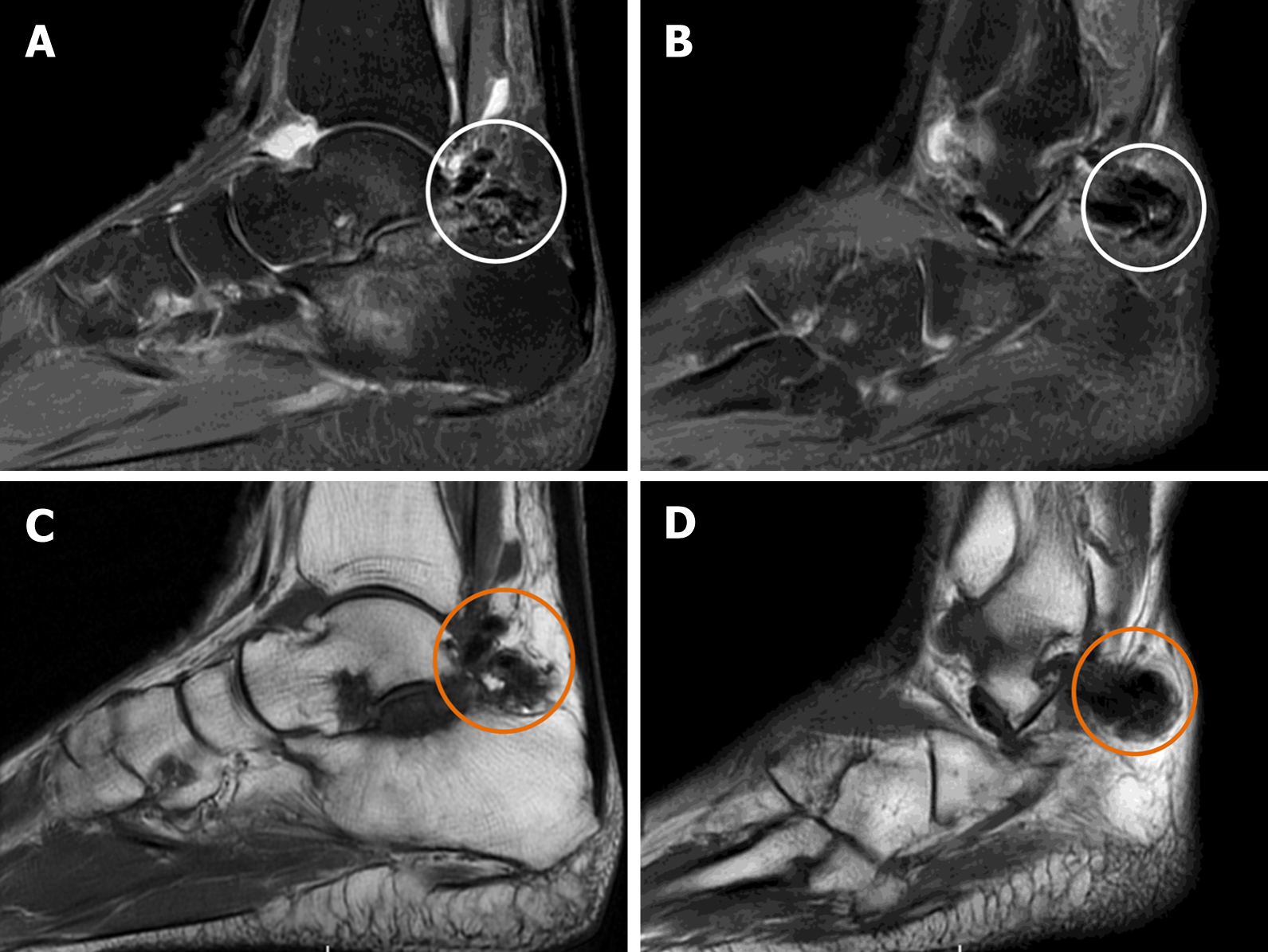 Figure 3 Magnetic resonance imaging. A and B: Sagittal T2-weighted images showed a low-intensity mass (white circle), which protruded from the subtalar joint into the posterior soft tissue; C and D: Sagittal T1-weighted images showed a low-intensity mass (orange circle) in the corresponding area. Besides that, mild degeneration of cartilage was observed in the subtalar joint, without apparent bony erosion.
Preliminary diagnosis

Based on the medical history, physical signs, and imaging examinations, a suspected diagnosis of diffuse PVNS of the right subtalar joint was made.

The mass was resected using the Kocher approach (Figure 4A). During surgery, we found deep brown soft tissue mixed with a small amount of cartilaginous tissue. The pedicle of this brown tissue was traced to the margin of the subtalar joint and the tendon sheath of the flexor hallucis longus tendon. After removing the mass in surgical vision, a 3.0 Steinmann pin was drilled into the lateral process of the calcaneal and talus, respectively. A retractor was used to distract the Steinmann pin (Figure 4B) (Huatrau, Chinatrau Instrument Co. Ltd., Guangzhou, China)[2] until sufficient vision of the subtalar joint was achieved. The mass surrounding the articular surface was removed completely; however, some of the cartilage was mildly degenerated. 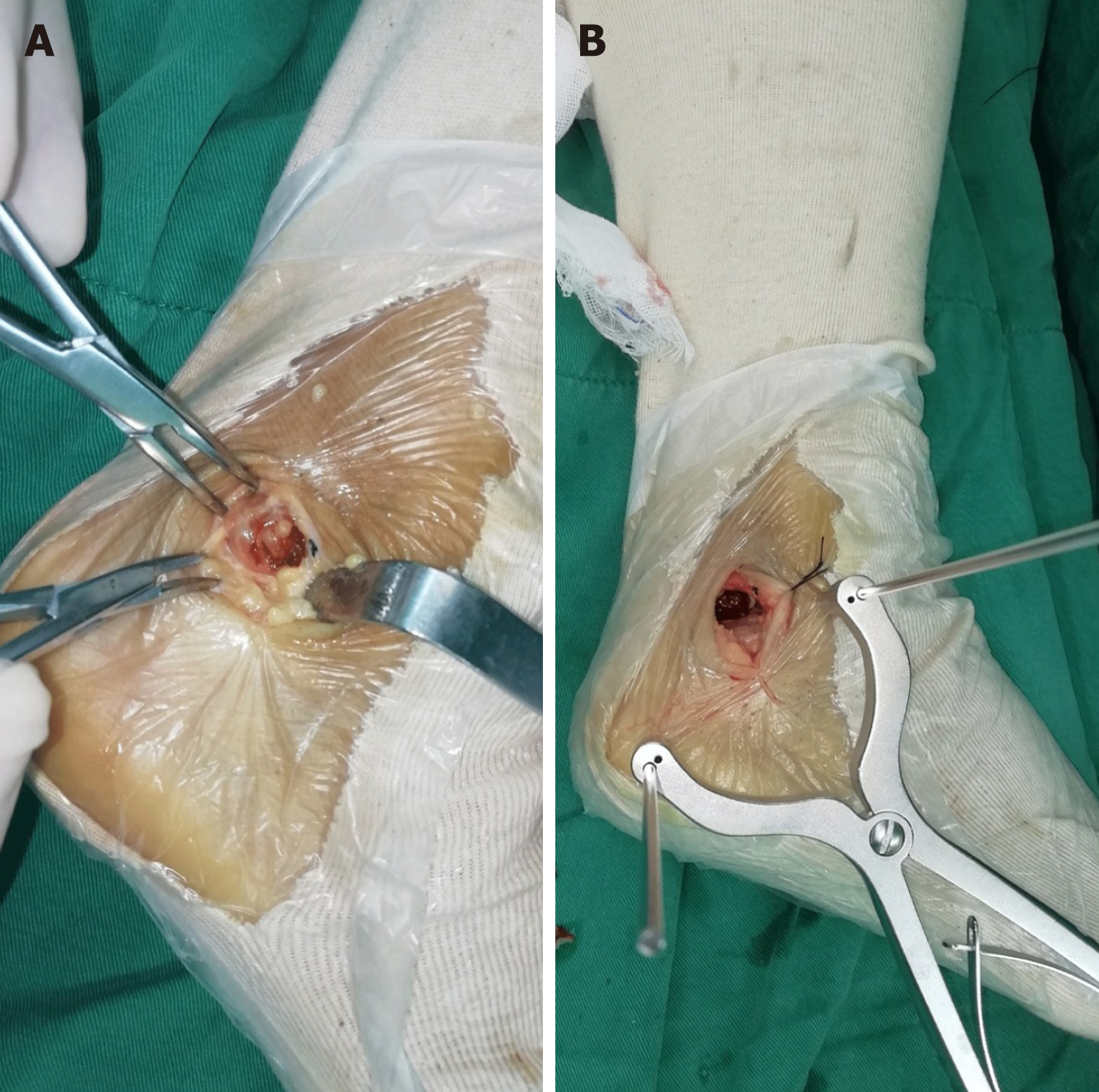 Figure 4 Surgical images. A: Deep brown soft tissue was found during the operation; B: We gradually retracted the Steinmann pin until sufficient vision of the subtalar joint was achieved, and some of the cartilage was found to have mild degeneration.
FINAL DIAGNOSIS

At 6 mo postoperatively, the patient had no pain but complained of discomfort after walking three blocks with the American Orthopedic Foot and Ankle Society Ankle–Hindfoot score of 97.

PVNS was first described by Henry L. Jaffe in 1941[1]. According to the pathological classification, it can be divided into two types: localized and diffuse, with the diffuse type drawing much attention due to its potential of causing damage to bone and cartilage[3]. At present, the etiology of the PVNS remains a topic of discussion. Many researchers have concluded the inflammatory pathogenic theory as a cause of PVNS[4,5]. This theory stems from colony-stimulating factor (CSF)-1, which recruits inflammatory cells such as lymphocytes, and osteoclast-type multinucleated giant cells, playing a critical role in the development of the disease. Matrix metalloproteinase stimulated by tumor necrosis factor-α leads directly to cartilage and bone erosion. Other researchers have focused on the theory of trauma pathogenesis, since two reports have confirmed the occurrence of PVNS after total knee arthroplasty[6,7].

Diffuse PVNS is an uncommon disease with 75% of reported cases involving the knee. Cases involving the subtalar joint are rare[8,9]. At present, MRI is a specific method for the preliminary diagnosis of diffuse PVNS. However, the role of physical signs and X-ray in the suspected diagnosis of diffuse subtalar joint PVNS should not be ignored. This is because some X-ray characteristics distinguish PVNS from osteoarthritis, thus guiding physicians to make an early suspicious diagnosis of PVNS. Our patient presented with a chief complaint of discomfort while walking on the right ankle at her first visit 18 mo before the second visit. There was swelling in the right ankle, but no significant mass formation. The first X-ray revealed osteophyte formation at the margin of the subtalar joint and a small amount of soft tissue calcification; however, the soft tissue calcification was not as apparent as it was on the second visit. The abnormal signs in the X-ray were ignored and no further MRI examination was recommended. Hence, she was misdiagnosed with right subtalar joint osteoarthritis.

MRI processes a noticeable sensitivity towards the deposition of hemosiderin, which contributes to early suspicion of PVNS[1]. Even so, it is not easy to differentiate PVNS from other diseases that potentially cause synovial hyperplasia such as rheumatoid arthritis, amyloid arthropathy, synovial chondromatosis, synovial hemangiomas, synovial lipomatosis, and synovial sarcoma[10]. Hence, postoperative pathological diagnosis remains the gold standard for the final diagnosis of PVNS. Total synovectomy has become a consensus for the surgical treatment of diffuse PVNS, and that was the surgical protocol used in this case. PVNS associated with severe articular cartilage degeneration is usually treated by joint fusion; however, the cartilage degeneration, in this case, was mild and did not meet the indication for joint fusion. The postoperative treatment remains controversial. Imatinib, as an inhibitor of macrophage-CSF receptor 1 has been used for the treatment of PVNS postoperatively[11]; however, its benefits and risks need further assessment. Radiotherapy has been used as an adjuvant postoperative therapy[12] for many years despite the risks of local skin necrosis, joint stiffness, or sarcoma. We chose a low-dose radiotherapy protocol over imatinib for this patient, and the complications of post-radiotherapy mentioned above have not yet occurred.

MRI as a nontraumatic examination should be recommended in the preliminary diagnostic evaluation of PVNS, and above all, the soft tissue calcification in X-ray analysis, painless joint swelling, or growing mass should be of concern at an early stage of diffuse subtalar joint PVNS.