Acute kidney injury (AKI) is a sudden or rapid decline in the filtration function of the kidneys which is marked by increased serum creatinine or blood urea nitrogen.

To examine the value of alprostadil-assisted continuous venous-venous hemofiltration (CVVH) in the treatment of severe AKI in severely ill patients.

This was a retrospective study and the inclusion criteria were as follows: (1) Age of patients (≥ 18 years); (2) Admission to intensive care unit due to non-renal primary disease, APACHE II score (≥ 18 points); (3) The diagnostic criteria of AKI guidelines were formulated with reference to the Global Organization for the Improvement of Prognosis in Kidney Diseases, with AKI grades of II-III; (4) All patients were treated with CVVH; and (5) Complete basic data were obtained for all patients.

Alprostadil-assisted CVVH in the treatment of severely ill patients with AKI can effectively improve the renal resistance index and partial pressure of urine oxygen, and has a positive effect on improving renal function.

Core Tip: Alprostadil-assisted continuous venous-venous hemofiltration in the treatment of severely ill patients with acute kidney injury may provide guidance and the basis for clinical practice.

Acute kidney injury (AKI) is a sudden or rapid decline in the filtration function of the kidneys which is marked by increased serum creatinine (Scr) or blood urea nitrogen (BUN). Treatment of severe AKI is usually relatively complicated.

Continuous venous-venous hemofiltration (CVVH) is an important method for the clinical treatment of kidney diseases, which uses convection and diffusion to remove solutes by mimicking the filtration principle of glomeruli. It introduces arterial or venous blood into semi-permeable membrane filters with good permeability, and ultimately removes water and solute. However, kidney function damage is a common complication of CVVH, which increases the cost of clinical treatment and has a serious impact on the quality of life of patients[1]. Alprostadil has been proved to have the effects of dilating vascular smooth muscle, anti-platelet agglutination, protecting cells and inhibiting inflammation. It has positive effects on organ protection in critically ill patients, but relatively few clinical studies have reported its use in CVVH to avoid kidney injury[2].

This retrospective study was conducted to select 100 intensive care unit (ICU) patients with AKI, of whom 50 patients received CVVH and basic treatment measures (control group), and the remaining 50 patients were also given alprostadil simultaneously (alprostadil group). The study subjects were admitted from January 2017 to March 2019, and the inclusion criteria were as follows: (1) Age of patients (≥ 18 years); (2) Admission to ICU due to non-renal primary disease, Acute Physiological Function and Chronic Health Score II (APACHE II) score (≥ 18 points); (3) The diagnostic criteria of AKI guidelines were formulated with reference to the Global Organization for the Improvement of Prognosis in Kidney Diseases, with AKI grades of II-III; (4) All patients were treated with CVVH; and (5) Complete basic data were obtained for all patients. The exclusion criteria were as follows: (1) Patients with primary kidney disease and renal dysfunction; (2) Patients with advanced malignant tumors; (3) Patients after kidney transplantation and liver transplantation; (4) Contraindications to CVVH treatment; and (5) Patients who were transferred for treatment.

Treatment methods: Control group: Jinbao Prismaflex continuous blood purification equipment was used for treatment, and 4000 mL/bag of replacement fluid was selected to filter the basic replacement fluid. The blood flow rate was set to 150 mL/min, and citrate was used for anticoagulation. The initial pump speed was 2.0%-2.5% of the blood flow rate, and 10% calcium gluconate solution was pumped into the venous end of the treatment pipeline to maintain the whole-body free calcium ion level of 1.0-1.2 mmol/L, and fluid resuscitation, anti-infection and glucocorticoid support were given at the same time for symptomatic treatment.

Alprostadil group: In addition to the treatment given to the control group, patients were also treated with alprostadil (produced by Harbin Pharmaceutical Group Bioengineering Co., Ltd., drug approval No: National drug approval No. H20059787, drug batch No. 20170516), and intravenous injection of 10 UG of alprostadil and 10 mL of normal saline was performed, once every 12 h for 1 wk.

Fluid infusion rate was controlled and vital signs of the patients were strictly monitored during treatment in both groups.

Data collection: Comparisons between the two groups of patients, included the APACHE II score, Sequential Organ Failure Score (SOFA), Scr, BUN, urinary kidney injury molecule-1 (KIM-1), urinary neutrophil gelatinase-associated lipocalin (NAGL), urinary interleukin-8 (IL-8), renal resistance index, urinary partial pressure of oxygen and therapeutic effect before and after treatment for 7 d [criteria for the improvement of renal function: (1) Cure: After treatment, the patient’s urine volume is more than 1000 mL/24 h, Scr is less than 176.8 mmol/L, and BUN is less than 7.14 mmol/L; (2) Improvement: After treatment, the patient’s urine volume is more than 1000 mL/24 h, Scr and urea nitrogen levels significantly decreased, but did not reach the normal level (trouble to confirm the normal range of creatinine, should not be 176.8); and (3) Ineffective: Did not meet the above criteria or patient died]. The fasting venous blood of the patients before and after treatment was sampled and centrifuged at a speed of 3000/rpm for 10 min to separate the serum. Then, using the kit provided by BIO SWAMP Company, and operating according to the kit instructions, an enzyme-linked immunosorbent assay was used to determine the concentration changes in urine and KIM-1 in patients.

Before treatment, there was no significant difference in APACHE II score and SOFA score between the alprostadil group and the control group (P > 0.05); while after 7 d of treatment, the APACHE II score and SOFA score of the alprostadil group were lower than those of the control group (P < 0.05), as shown in Table 1.

Comparison of renal function index between the two groups 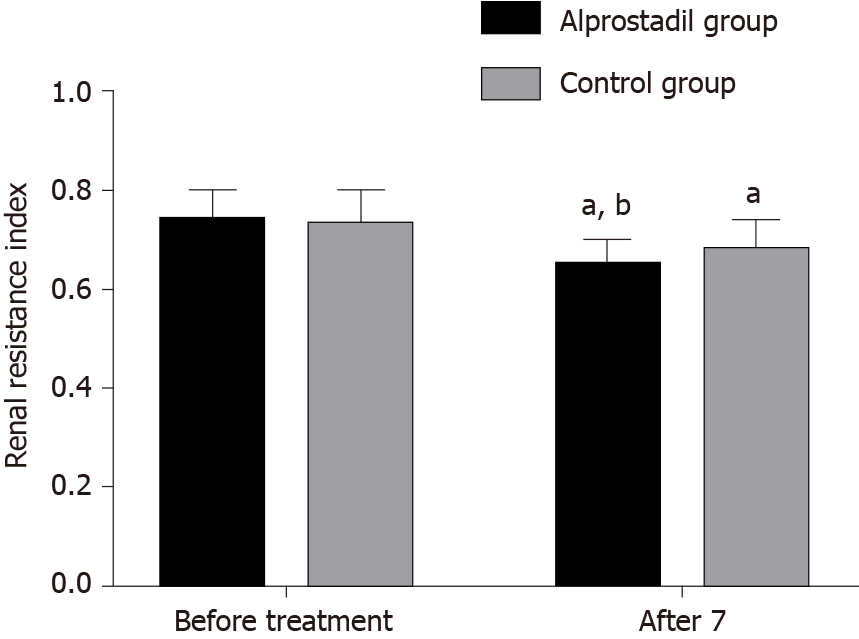 Figure 1 Histogram of renal resistance index in the two groups of patients. Compared with this group before treatment aP < 0.05, compared with the control group bP < 0.05. 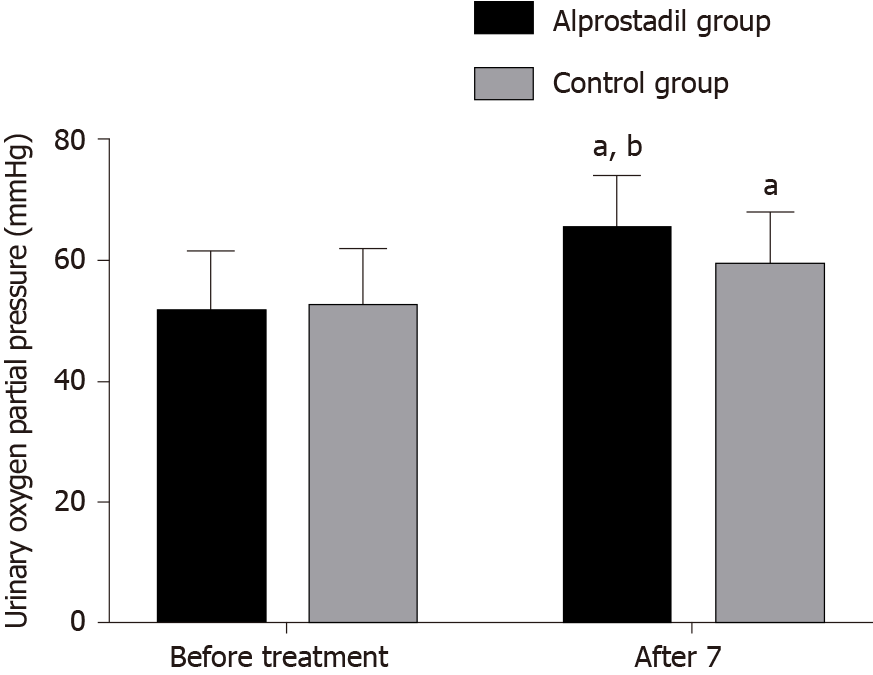 The recovery time of urine volume in the alprostadil group was 9.1 ± 2.0 d, which was lower than that in the control group (10.6 ± 2.5 d), and the difference was statistically significant (P < 0.05), while the incidence of adverse reactions in the alprostadil group was not significantly different to that in the control group (P > 0.05), as shown in Table 5.

The ICU is a place to rescue severely ill patients, and most patients suffer from multiple organ failure. It has been reported that the mortality rate of patients with more than 2 failed organs is more than 50%, and that of patients with more than 4 failed organs is 100%, which seriously affects the quality of life and safety of patients[3,4]. Studies have shown that the release of proinflammatory mediators is increased in severely ill patients, and then tissue replacement downregulates the release of proinflammatory mediators. Generally, the concentration of local inflammatory mediators is higher than the concentration in the circulation and does not lead to destruction of the body’s inflammatory response. However, with aggravation of the disease, the local proinflammatory response cannot resist the invasion and will mobilize the systemic defense mechanism, and the excessive and long-lasting release of the proinflammatory response may destroy the homeostasis of the human body and form a systemic inflammatory cascade reaction, eventually causing cell damage, endothelial cell dysfunction, increased microvascular permeability, microcirculation disorder, and changes in the body’s coagulation system, which cannot restore the stability of the body’s internal environment and have a serious impact on the safety of patients[5,6]. Therefore, in the treatment of severely ill patients, it is necessary not only to provide effective nutritional support to avoid aggravating the burden of organ function, but also to carry out active treatment of anti-inflammatory mediators in the body. Animal experiments have confirmed that the uncontrolled inflammatory response causes the occurrence of MODS; therefore, it is of great significance to improve the prognosis of patients by effectively removing toxins and inflammatory mediators from the body[7,8].

At present, hemodialysis is an important treatment method in severely ill patients, which can remove endotoxin substances, filter excess water, and prolong the survival time of patients. CVVH treatment has become a commonly used method in clinical practice, which uses a variety of physical techniques to displace inflammatory factors from the body, and improve the lung microcirculation and oxygen carrying capacity of parenchymal cells, as well as tissue oxygen utilization, but can also clear inflammatory mediators, improve endothelial cell function in patients, and have a stabilizing effect on disorders of coagulation and fibrinolysis[9]. However, it was found that AKI can occur during the course of CVVH treatment, which is due to abnormal renal microcirculation, reduced peripheral vascular resistance, uneven distribution of blood flow in organs, and reduced capillary blood volume. AKI generally occurs mainly in the renal cortex and medulla, and the reduction of renal blood flow causes kidney injury, as well as the swelling of endothelial cells which causes renal vascular occlusion[10,11]. On the other hand, due to the expansion of endothelial cells, the reduction of vascular substances and the enhancement of vasoconstrictor substances after injury, the redistribution of renal blood flow leads to the oxidative stress reaction in vivo, and renal tubular cell damage can also cause AKI due to the uneven distribution of renal blood flow caused by microcirculation disorder[12,13].

In conclusion, alprostadil combined with CVVH in the treatment of severely ill patients complicated by AKI can effectively improve renal resistance index, partial pressure of oxygen in urine, and has a positive effect on improving renal function.

To explore new methods for the treatment of acute kidney injury.

To examine the effect of alprostadil on continuous venous-venous hemofiltration (CVVH) in patients with acute renal injury (AKI).

This was a retrospective study of 100 intensive care unit patients with AKI.

Alprostadil combined with CVVH in the treatment of severely ill patients complicated with AKI can effectively improve renal resistance index, partial pressure of oxygen in urine, and has a positive effect on improving renal function.