To clarify the risk factors for occult metastasis in patients with BTC.

Medical records of patients with BTC who underwent surgery at our institution between January 2008 and June 2014 were retrospectively reviewed. The patients were divided into two groups, according to resection or exploratory laparotomy (EL). Preoperative laboratory data, including inflammation-based prognostic scores and tumor markers, were compared between the two groups. Prognostic importance of detected risk factors was also evaluated.

A total of 236 patients were enrolled in this study. Twenty-six (11%) patients underwent EL. Among the EL patients, there were 16 cases of occult metastasis (7 liver metastases and 9 abdominal disseminations). Serum carcinoembryonic antigen level, carbohydrate antigen 19-9 level, neutrophil-lymphocyte ratio and modified Glasgow prognostic score were significantly higher in the EL group than in the resected group, and these factors were prognostic. Among these factors, carcinoembryonic antigen > 7 ng/mL was the most useful to predict occult metastasis in BTC. When patients have more than three of these positive factors, the rate of occult metastasis increases.

Inflammation-based prognostic scores and tumor markers are useful in detecting occult metastasis in BTC; based on these factors, staging laparoscopy may reduce the rate of EL.

Core Tip: This is a retrospective study to clarify the risk factors for occult metastasis in patients with biliary tract cancer (BTC). Radiological detection of small liver metastasis or peritoneal metastasis is difficult, and 11% BTC patients resulted in exploratory laparotomy in 7 years. Serum carcinoembryonic antigen (CEA) and carbohydrate antigen 19-9 levels, neutrophil-lymphocyte ratio and modified Glasgow prognostic score were significantly higher in the exploratory laparotomy group than in resected group. In these, CEA > 7 ng/mL and a combination of these factors were useful for predicting occult metastasis in BTC. Based on these factors, selective staging laparoscopy may reduce the rate of exploratory laparotomy.

Biliary tract cancer (BTC) has a poor prognosis. Curative resection is the most promising therapy, but many patients present with advanced or unresectable disease at the time of diagnosis[1,2]. It is widely accepted that metastases to the liver, peritoneum, distant lymph nodes, lung and bone are definite unresectable factors[3]. Advances in radiological imaging techniques have enabled us to understand the details of BTC preoperatively. Detecting small liver metastasis or peritoneal metastasis remains difficult, and some patients are decided to be unresectable after laparotomy[2,4]. Staging laparoscopy (SL) may help avoid unnecessary laparotomy due to these occult metastases, and it is widely performed in patients with various solid cancer types [5-8].

This retrospective study included 236 patients with BTC who underwent open surgery between January 2008 and June 2014 at the Kobe University Hospital (Kobe, Hyogo, Japan). All BTC cases were histologically confirmed. For each patient, the following clinical information was collected: Age, sex, body mass index (BMI), location of tumor, operative procedure, prognosis, and preoperative laboratory and imaging findings. The patients were divided the following into two groups: Resected (R) and EL.

This study protocol was approved by the Ethics Committee of the Kobe University Graduate School of Medicine (#160163). Informed consent was obtained using the opt-out principle.

The patients were diagnosed with unresectable diseases when the imaging study findings showed definite distant metastases, far extended disease, or several locally advanced diseases such as arterial and/or portal vein encasement. Patients with unresectable disease received systemic chemotherapy or best supportive care. In the absence of radiologically unresectable disease, patients underwent open surgery. At the time of laparotomy, we routinely explored abnormalities in the abdominal cavity. EL was selected when we found liver or peritoneal metastasis and macroscopic bulky distant lymph node metastasis. When histological distant lymph node metastases (para-aortic lymph node metastases) were detected in patients with gallbladder cancer, we also performed EL according to a previous study[14]. When surgeons judged locally advanced tumor more than expected at laparotomy, EL was occasionally selected. In the absence of unresectable factors, complete tumor resection with lymphadenectomy was performed.

Continuous variables were analyzed using the Wilcoxon rank-sum test. Fisher’s exact test was used to compare categorical variables. To elucidate the risk factors for EL in patients with BTC, tumor markers and inflammation-based prognostic scores differences between EL and R groups were compared. A receiver operating characteristic (ROC) curve was generated and the area under the curve [and its 95% confidence interval (CI)] was calculated to determine the best cutoff values for continuous parameter to discriminate the level of the EL and R group.

Finally, to evaluate the prognosis of the risk factors, the Kaplan-Meier analysis with the log-rank test was used to compare survival curves by the identified risk factors.

All statistical tests were two-sided and performed at a significance level of 0.05. 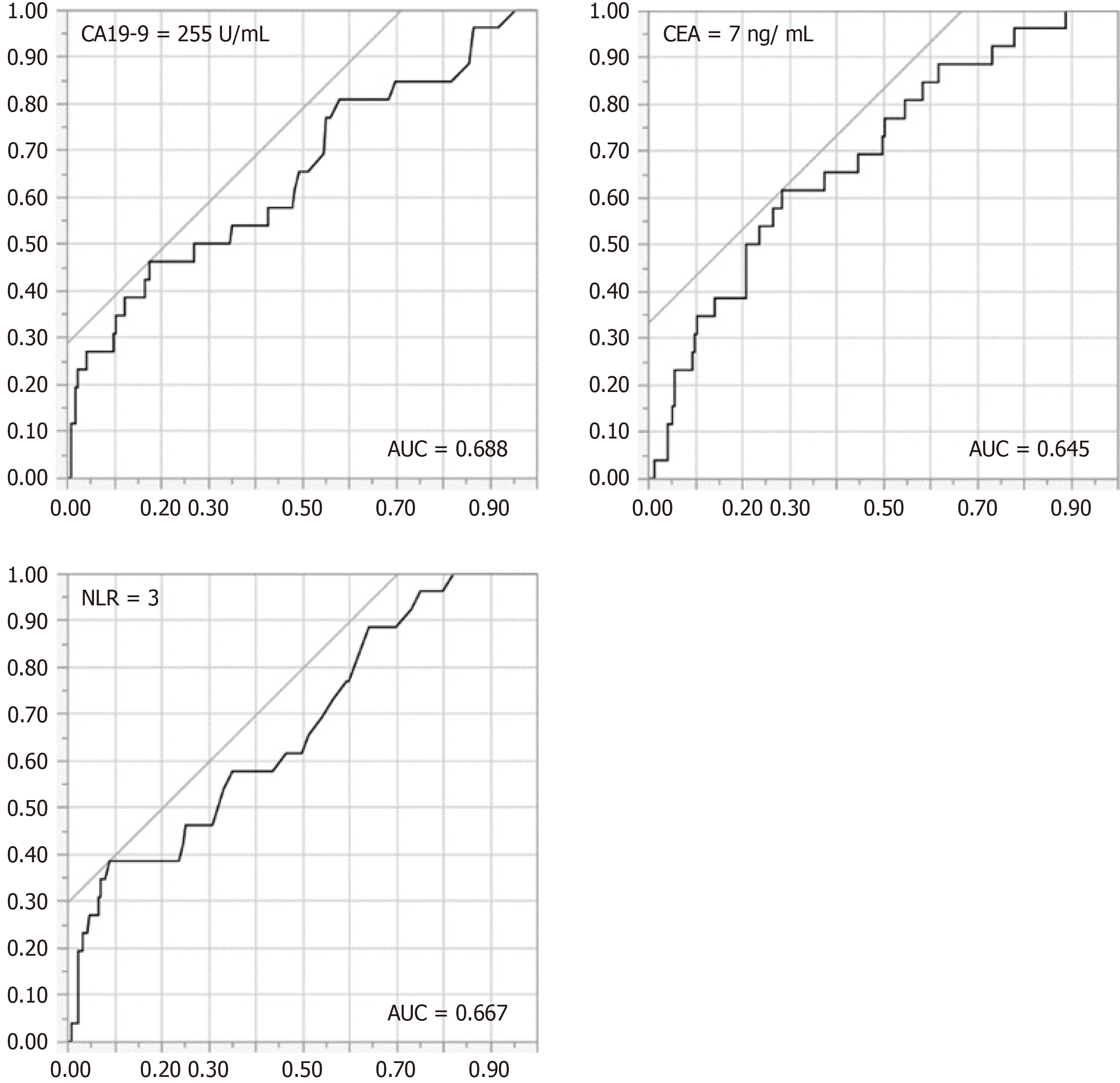 Table 4 shows the tumor markers, inflammation-based prognostic scores, and cumulative survival time for each biliary cancer. CA19-9 was high in intrahepatic and extrahepatic bile duct cancer and gallbladder cancer, but low in ampullary cancer. Inflammation-based prognostic scores were similar for each BTC. In terms of postoperative survival time, ampullary cancer showed a good prognosis compared to other BTCs.

When we performed sensitivity analysis for each biliary cancer (excluding ampullary cancer since ampullary cancer had zero EL cases) by using the cutoff value shown in Table 3, we found a similar tendency to the result for all BTCs; that is, specificity was high but sensitivity was particularly low in each cancer (Table 5).

Evaluation of prognosis by the risk factors

The overall survival curves between all the patients based on these four factors (CA19-9, CEA, NLR, and mGPS) and type of operation were compared (Figure 2). The prognoses were significantly worse in the cohorts with CA19-9 > 255 U/mL, CEA > 7 ng/mL, NLR > 3, mGPS = B, C, or D, and EL. This result suggests that these indices may be prognostic factors.

BTCs show poor prognosis and are often diagnosed at an advanced stage. The rate of resection of BTC with curative intent is only 70%[1,2]. In addition, approximately 30% of the patients preoperatively diagnosed with resectable diseases show unresectable diseases during laparotomy due to metastatic progression[2,4]. In our cohort, 11% of the patients diagnosed with resectable disease by imaging studies were eventually diagnosed with unresectable disease at laparotomy and underwent EL. This rate is better than that reported previously[2,4]. This discrepancy may be due to previous studies including cases from the 1990s, when the diagnostic modalities were limited and MDCT and FDG-PET were unavailable. Recently, advances in imaging techniques, especially MDCT, have enabled us to evaluate the local resectability of BTC. The limitations in detecting liver and peritoneal metastases have not yet been overcome[17-20]. As the lesions of liver and peritoneal metastasis first detected during the operation are often very small and solitary, they are difficult to detect even with contrast-based techniques. Even FDG-PET scanners have difficulty in delineating lesions < 8.8 mm in diameter[21].

Moreover, EL imparts physical strain on the patients and also has a negative impact on the optimization of medical resources. To perform an operation with curative intent, we have to secure the operation room for 8 h to 12 h along with the required number of surgeons and allied medical staff for each BTC patient. If the operation necessitates EL, then these resources would be wasted. For this problem, the utility of SL in patients with BTC has been reported[22-26]. SL ensures decreased blood loss, shorter duration of operation and faster induction of chemotherapy than EL[7]. However, as even SL may impose extra stress and costs for those whom SL is potentially unnecessary, it would not be appropriate to perform SL for all patients with BTC. In our cohort, if we had performed SL in all the patients, the outcome of SL would have been only 6.8% (occult metastasis, 16/236). Thus, clinicians should select patients who undergo SL efficiently. There are some previous reports describing the selection criteria for SL in pancreas and periampullary cancer[10,27,28]. These studies indicated that serum CA19-9 levels and the PLR are useful in selecting patients for SL. However, to the best of our knowledge, this is the first report discussing the selection criteria for SL in patients with BTC.

In this study, CEA > 7 ng/mL was the most useful criteria for detecting occult metastasis. If SL was performed in cases with CEA > 7 ng/mL, unnecessary EL might be avoided in 23% of BTC patients. CA19-9, NLR and mGPS were also useful to decrease unnecessary laparotomy. In addition, when the number of positive factors increased, the estimated reduction rate of EL gradually increased. In this study, if all four factors were positive, the rate was 33.3%. However, these factors may not to be highly related for selective SL. Previous studies on BTC demonstrated that preoperative SL could detect liver or peritoneal metastasis in 14%–41% of the patients[23-26]. These studies discussed nonselective SL. Our data could be due to the relatively low rate of performing EL (11%) due to accurate preoperative imaging studies, including MDCT and FDG-PET.

This study has several limitations. First, BTCs are heterogeneous malignancies comprising intrahepatic cholangiocarcinoma, extrahepatic cholangiocarcinoma, gallbladder carcinoma, and ampullary carcinoma. Although sensitivity analysis showed similar results for all BTCs, a study with a large number of tumors is required. However, due to the heterogeneity of BTCs, the results of this study may be suitable for evaluation of other solid malignancies. However, studies on other solid malignancies are also required. Second, this study included a limited number of patients with EL and no representation from primarily unresectable patients. Further studies including primarily unresectable patients are needed. Lastly, although we detected the factors predicting the EL or occult metastasis in BTC, the validation study has not been performed yet. To determine the selection criteria for SL future study is required.

The study indicates that planned SL may reduce requirement of EL when the inflammation-based prognostic scores and tumor markers or their combinations are used in selecting patients with BTC.

Advances in radiological imaging techniques have enabled us to understand the details of biliary tract cancer (BTC) preoperatively. However, detecting small liver metastasis or peritoneal metastasis remains difficult in BTCs.

This study aimed to elucidate the risk factors for exploratory laparotomy due to occult metastasis in patients with BTC using tumor markers and inflammation-based prognostic scores.

This was a retrospective study from the data of 236 BTC patients.

Twenty-six (11%) patients underwent exploratory laparotomy, and there were sixteen occult metastasis cases (7 liver metastasis and 9 abdominal disseminations). Serum carcinoembryonic antigen, carbohydrate antigen 19-9, neutrophil-lymphocyte ratio and modified Glasgow prognostic score were significantly higher in the exploratory laparotomy group (n = 26) than in the resected group (n = 210). Among these factors, carcinoembryonic antigen > 7 ng/mL was the most useful to predict occult metastasis. When patients had more than three of these positive factors, the rate of occult metastasis increased.

Inflammation-based prognostic scores and tumor markers are useful in detecting occult metastasis in patients with BTC, and based on a combination of these factors, selective staging laparoscopy may reduce the rate of exploratory laparotomy.

Since BTCs are heterogeneous malignancies, a study with a large number of tumors is required.