Brunner’s gland hyperplasia (BGH) is a rare benign lesion of the duodenum. Lipomatous pseudohypertrophy (LiPH) of the pancreas is an extremely rare disease. Because each condition is rare, the probability of purely coincidental coexistence of both conditions is extremely low.

We report a 26-year-old man presenting to our hospital with symptoms of recurrent upper gastrointestinal bleeding. Upper gastrointestinal endoscopy showed a huge pedunculated polypoid lesion in the duodenum with bleeding at the base of the lesion. Histopathological examination of the duodenal biopsy specimens showed BGH. Besides, abdominal computed tomography and magnetic resonance imaging revealed marked fat replacement over the entire pancreas, confirmed by histopathological evaluation on percutaneous pancreatic biopsies. Based on the radiological and histological findings, LiPH of the pancreas and BGH were diagnosed. The patient refused any surgical intervention. Therefore, he was managed with supportive treatment. The patient’s symptoms improved and there was no further bleeding.

This is the first well-documented case showing the coexistence of LiPH of the pancreas and BGH.

Core Tip: Brunner’s gland hyperplasia (BGH) and lipomatous pseudohypertrophy (LiPH) of the pancreas are rare diseases. We present a case with coexisting LiPH of the pancreas and a huge pedunculated BGH of the duodenum that presented with upper gastrointestinal bleeding. Esophagogastroduodenoscopy revealed a large submucosal mass along the duodenum with central ulceration, and radiological examination showed marked thickening of the duodenal walls and fatty replacement over the entire pancreatic parenchyma. Diagnoses of BGH and LiPH were confirmed by histological evaluations. Although rare, BGH can cause gastrointestinal bleeding. Furthermore, this case highlights the usefulness of combined esophagogastroduodenoscopy and radiological examinations in patients with melena.

Brunner’s gland hyperplasia (BGH) is a rare, benign proliferative lesion of exocrine glands mainly located in the submucosal layer of the duodenum[1]. Most BGHs are asymptomatic[2,3], but some present with abdominal pain, upper gastrointestinal (GI) bleeding and may be associated with obstruction[4-9]. Lipomatous pseudohypertrophy (LiPH) of the pancreas is an extremely rare disease, characterized by the replacement of exocrine pancreatic parenchyma with mature fatty tissue[10,11]. We report a patient who presented with symptoms of GI bleeding from a huge pedunculated BGH of the duodenum with concurrent LiPH of the pancreas. This report can be useful for both education and clinical practice purposes.

A 26-year-old male patient was admitted with symptoms of fatigue, tiredness, generally being unwell, melena and anemia.

His illness had begun 2 wk before with intermittent dark stools. Three days to presentation, he had a fever of 39C and right quadrant pain. He experienced an unexplained weight loss of 13 kg within 2 wk. He denied current or prior alcohol consumption, smoking, or drug use.

The patient had a medical history of surgery for intestinal obstruction due to adhesion 2 mo before the current admission, which was associated with a previous operation for intussusception at the age of 13 years. Two years ago, he also had melena managed with blood transfusion and proton pump inhibitors.

No significant family history or risk factors for GI pathologies were found.

Physical examination showed clinical signs of anemia, otherwise within normal limits. No sign of jaundice was observed. His abdomen was flat and soft without tenderness or palpable mass. His height was 162 cm and his weight was 49 kg (body mass index 18.7 kg/m2).

Dynamic abdominal computed tomography (CT) showed marked thickening of the duodenal walls and fatty replacement over the entire pancreatic parenchyma with no delineation between the pancreas and duodenum. The main pancreatic duct was not narrowed or dilated, and no tumor was detected (Figure 1). Magnetic resonance imaging (MRI) with T1-weighted, T2-weighted, and fat-suppression images showed a large mass-like lesion containing adipose tissue from the pancreatic head to tail (Figure 1). Fatty tissue infiltrated not only the pancreatic parenchyma but also the duodenal wall (Figure 2A, B). Both CT and MRI findings suggested the diagnosis of LiPH. Furthermore, focal cystic dilatations of intrahepatic bile ducts in the left hepatic lobe (localized biliary ectasia) were also detected on CT and MRI (Figure 2C, D). Esophagogastroduodenoscopy revealed a large submucosal mass along the C-shaped loop of the duodenum, the size of the tumor was about 100 mm in the longest diameter with central ulceration, which was considered the origin of bleeding (Figure 3).

Figure 1 Computed tomography (CT) and magnetic resonance imaging (MRI) . A: Plain CT: density of the pancreatic parenchyma was uniformly decreased to the same level as that of the surrounding fatty tissue (attenuation value = 90.64 HU); B: Contrast-enhanced CT: Pancreatic parenchyma was absent, completely replaced by fat; C and D: MRI of the pancreas. In- and out-phase MRI respectively show a typical global (C) hyperintensity; and (D) fat suppression. 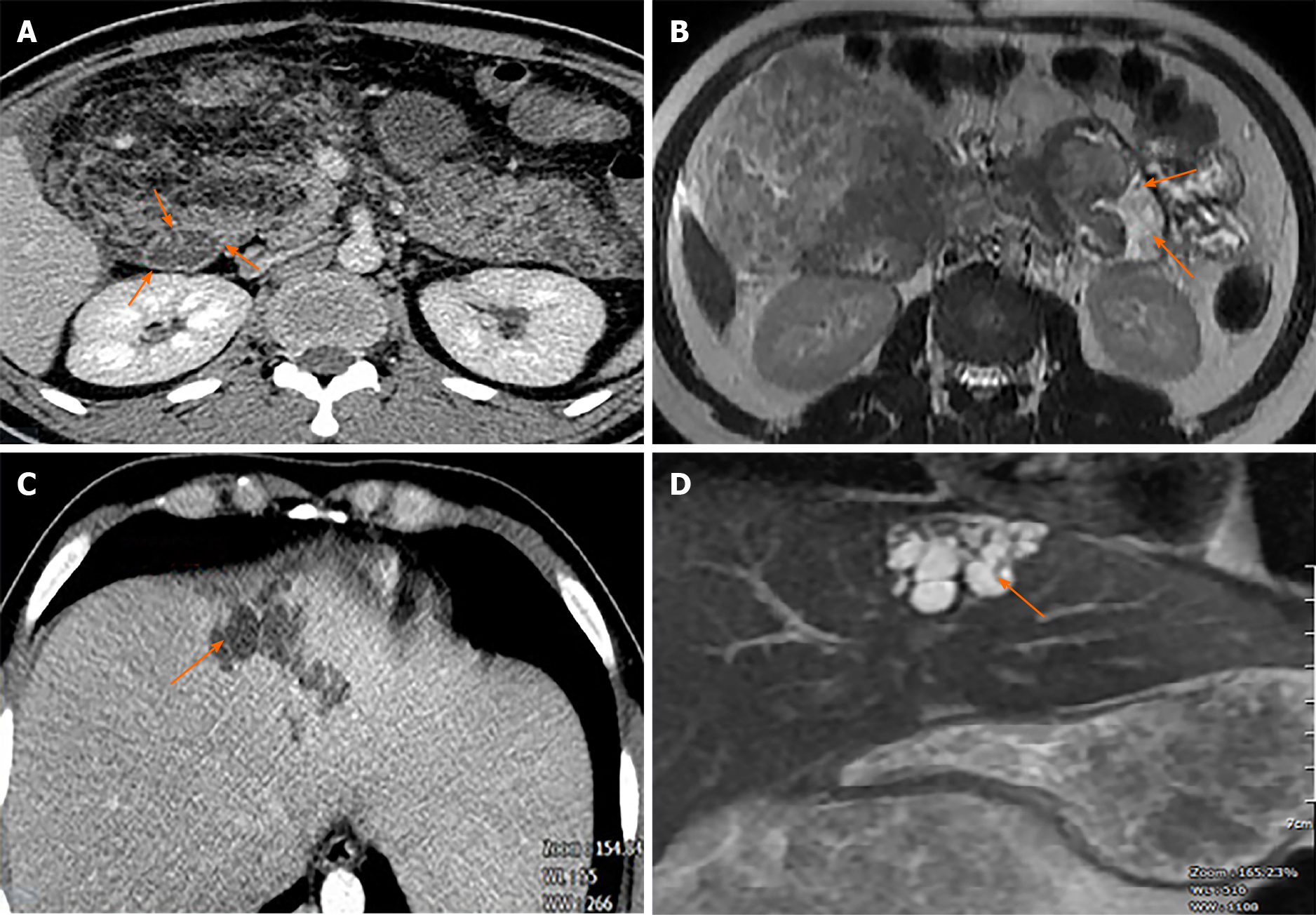 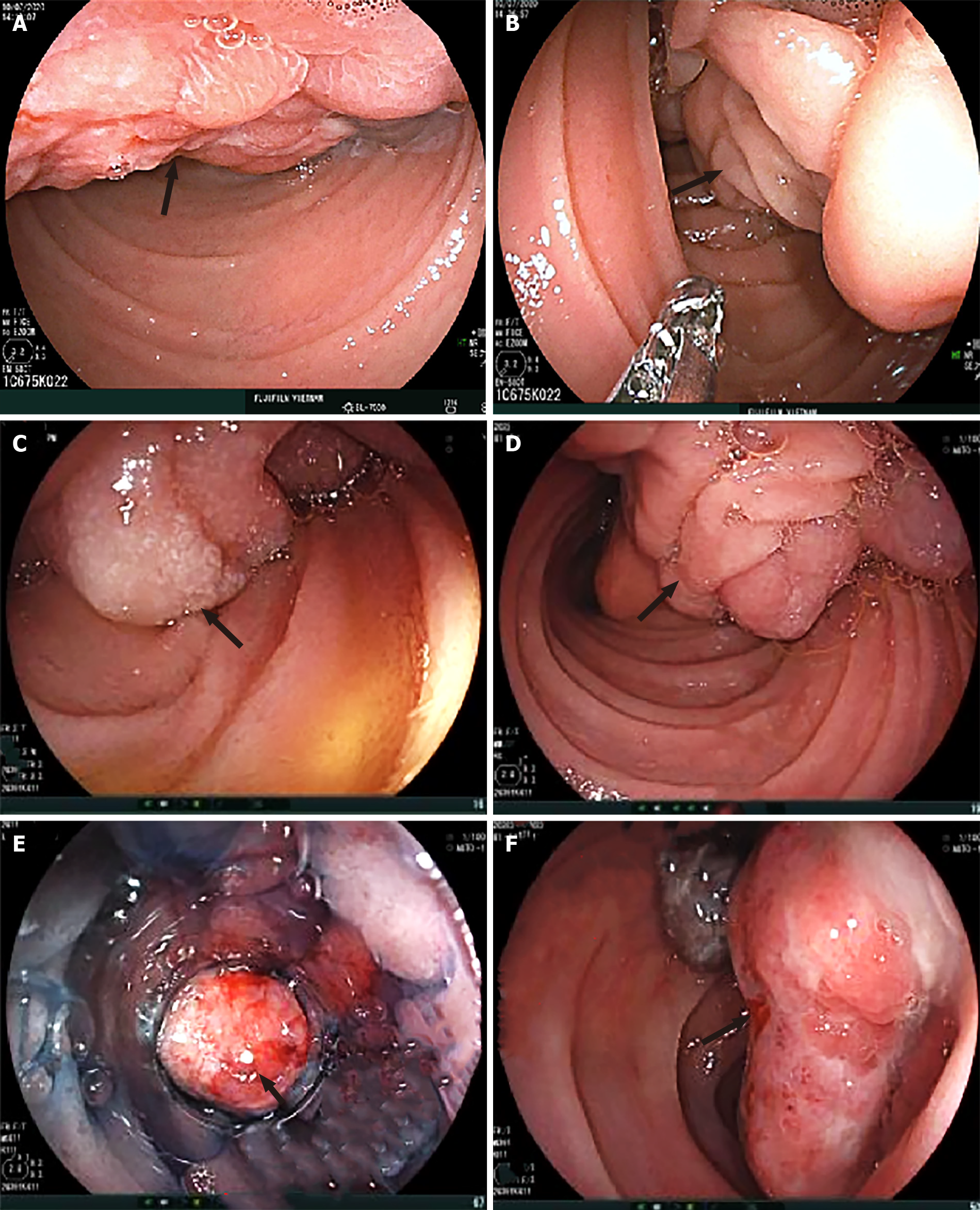 Figure 3 Endoscopic appearance of the submucosal tumor arising from the duodenum (arrows). A: Irregular surface with shallow ulcers; B–D: A thick stalk below the head portion of the tumor; E and F: Surface ulcers with bleeding.
FINAL DIAGNOSIS

Multiple biopsies were taken from the duodenal mass. Histological examination confirmed the diagnosis of BGH (Figure 4). Ultrasound-guided percutaneous pancreatic biopsy was also performed. Histological features of the biopsy specimens revealed the pancreatic parenchyma was diffusely replaced with adipose tissue, but some retained pancreatic acini, pancreatic ducts, and islets of Langerhans were identified with a scattered distribution (Figure 4), confirming a diagnosis of LiPH of the pancreas. 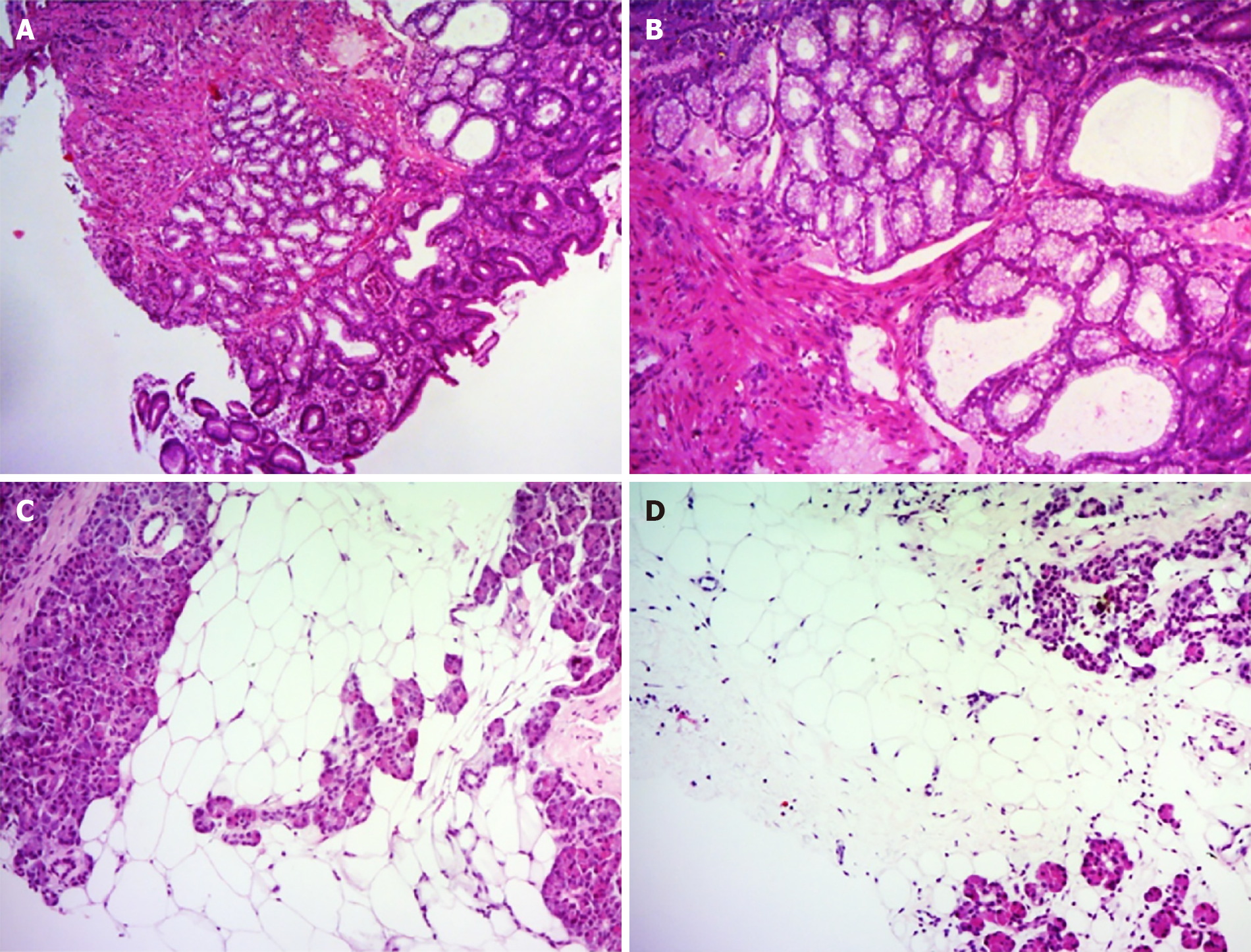 Since the patient showed acute upper GI bleeding and anemia, blood transfusion was conducted. Because of the risk of recurrent bleeding and the difficulty in endoscopic resection of BGH due to its huge size, poor endoscopic visibility and maneuverability, surgery was recommended. However, the patient refused any surgical intervention. Therefore, he was managed with supportive treatment including proton pump inhibitors.

The patient’s symptoms improved, and he has been followed up for 6 mo regularly with no further bleeding as an outpatient. He gained weight up to 62 kg.

This is a case report of the coexistence of two rare conditions, LiPH of the pancreas and a huge pedunculated BGH of the duodenum, in which the patient presented with upper GI bleeding secondary to ulceration of BGH.

Benign proliferations in Brunner’s glands account for 5%–10% of benign duodenal masses and < 1% of primary small intestinal tumors[2,13,14,17]. BGH was found in 0.3% among patients who undergo upper gastrointestinal endoscopy[2,17]. These proliferative lesions may manifest as solitary or multiple nodules, appearing as sessile or polypoid masses in most cases. They are usually found in the proximal duodenum[3,15,18]. They are mostly < 20 mm[3,17]. However, much larger lesions measuring up to 120 mm have been reported[19]. Clinically, most BGHs are asymptomatic, incidentally found in patients at the age of 50–60 years[2,3,15,17]. In case of symptomatic BGH, the most common presentation is GI bleeding, either hematemesis or melena[4,5], although < 15 cases showing acute hemorrhage have been reported[20,21]. Rarely, BGHs can cause biliary obstruction and pancreatitis[22]. Treatment by either surgical resection or endoscopic polypectomy is required for symptomatic patients. Our patient showed a huge pedunculated mass, which is a rare presentation of duodenal BGH. In addition, our patient presented with recurrent upper GI bleeding, which is also a rare presentation of duodenal BGH, although it was not definitely clear if the BGH was the only bleeding source because esophagogastroduodenoscopy showed no stigmata of recent bleeding, such as clearly exposed vessels and active bleeding with or without blood clots. Because the esophagogastroduodenoscopy showed ulcers at the surface of the BGH, we suggested the BGH as a possible bleeding source.

LiPH of the pancreas is an extremely rare entity of unknown etiology. The replacement of the entire pancreas with increasing amounts of adipose tissue and the consequent enlargement of the pancreas was first described by Hantelmann in 1931[10]. Fewer than 100 cases of LiPH of the pancreas have been reported worldwide[11,23-29]. In a previous case series and literature review, the mean patient age was 41 years (range, 6 d to 80 years), with no difference in gender distribution[23]. The affected sites included the entire pancreas (20 cases), body and pancreatic tail (3 cases), pancreatic head (4 cases) and uncinate process (1 case)[28]. In symptomatic patients, the most common symptoms were exocrine pancreatic dysfunction such as chronic diarrhea and signs of chronic pancreatitis[26,30]. In another case, the disease caused an obstruction of the bile duct and required surgical treatment by a hepaticojejunostomy.

An interesting feature of our patient was the coexistence of LiPH of the pancreas and a huge pedunculated BGH of the duodenum. Because each condition is so rare, the probability of purely coincidental coexistence of both conditions may be extremely low, although the direct etiopathogenic association between these two diseases is unclear. As CT and MRI showed direct infiltration of LiPH into the duodenal wall, we suggest some mechanical influence by the infiltrated fatty tissue might have contributed to the development and/or growth of duodenal BGH. Further research is necessary to clarify the underlying mechanism of association between LiPH of the pancreas and other diseases.

There were some limitations to our case report. First, the patient did not undergo surgical treatment for a large BGH that showed bleeding. Because the patient showed recurrent bleeding, we should have persuaded the patient to undergo surgery for prevention of recurrent, massive bleeding in the future. In addition, surgery could have shown the etiopathogenic association of BGH and LiPH of the pancreas by detailed histological examination of the surgically resected specimen. Second, we cannot confidently conclude that BGH was the only bleeding source because the recent bleeding stigma was not evident at the BGH of our patient. Evaluation of the small intestine should have been performed to see if there were other possible bleeding sources in the small intestine. Finally, we did not show the follow-up clinical course of this patient. Thus, we could not show the long-term clinical course of the patient with two rare conditions.

We report an extremely rare case with coexisting LiPH of the pancreas and a huge pedunculated BGH of the duodenum that presented with upper GI bleeding. This case report highlights special features of both LiPH and BGH and suggests that LiPH of the pancreas may infiltrate the duodenal wall and potentially coincide with duodenal pathologies.