A 69-year-old man was diagnosed with hypertension and acute cerebral infarction presenting with left upper limb weakness and pain even gradually aggravating to left limb hemiplegia 30 years ago. He was managed with antihypertensive and antithrombotic therapy; however, his condition was recurrent, and he never had any further examination. It was found that the difference of the bilateral upper arm systolic pressure was over 20 mmHg, and Doppler examination showed that the blood flow of the left vertebral artery was reversed, suggesting SSS. Further tests revealed a benign lymphoepithelial lesion in salivary gland tissue, confirming the Sjogren's syndrome.

The patient was found to have hypertension when he was 33 years old, and the blood pressure of both sides was asymmetric, which was ignored. The patient's symptoms of dizziness and upper limb weakness were misdiagnosed as general cerebral infarction. It is necessary to test the aorta computed tomography angiography to prove secondary hypertension factors such as Sjogren's syndrome.

Core Tip: We present a case of subclavian steal syndrome caused by Sjogren's syndrome where the patient had experienced dizziness and left upper limb weakness for 10 years despite medical treatment and was misdiagnosed as general cerebral infarction. This case illustrates the significance of detailed history collection and physical examination. A young patient with hypertension needs to measure bilateral blood pressure and examine the immunologic condition and aorta computed tomography angiography to analyze secondary hypertension factors such as Sjogren's syndrome.

Subclavian steal syndrome (SSS), also known as subclavian-vertebral artery steal syndrome, is a phenomenon causing retrograde flow in an ipsilateral vertebral artery due to stenosis or occlusion of the subclavian artery, proximal to the origin of the vertebral artery. Subclavian steal is asymptomatic in most patients and does not warrant invasive evaluation or treatment. It can manifest in some patients with arterial insufficiency symptoms affecting the brain or the upper extremity, supplied by the subclavian artery. Contorni first discovered the disease in 1960, and it was seen in patients who had a transient ischemic attack without radial artery beat[1]. The following year, Fisher found that the ipsilateral vertebral artery of the patients with the symptoms showed retrograde flow and proposed "SSS"[2]. We report a rare case of SSS caused by Sjogren's syndrome, especially for elderly patients with atherosclerosis risk factors.

The patient, a 65-year-old man, presented to our cardiology outpatient clinic with left upper limb fatigue and pain for 30 years and dizziness for 1 mo.

The patient denied a history of diabetes.

The patient had a history of "penicillin" allergy and had no familial disease.

Aortic angiography showed that the proximal part of the left subclavian artery was occluded, and a small ulcer of the aortic arch was formed (Figure 1A). Brain magnetic resonance imaging showed cerebral ischemia in the center of the bilateral semi-oval. Color Doppler ultrasound of vertebral arteries showed that the blood flow velocity of right vertebral artery was 190 cm/s, with a resistance index of 0.85 (Figure 2A), and the blood flow of the left vertebral artery is reversed, showing "small slow waves" (Figure 2B). Color Doppler ultrasound of the upper extremity arteries showed the right upper extremity artery as expected (Figure 3A), and the frequency spectrum of the left upper extremity artery was a "small slow-wave" (Figure 3B). 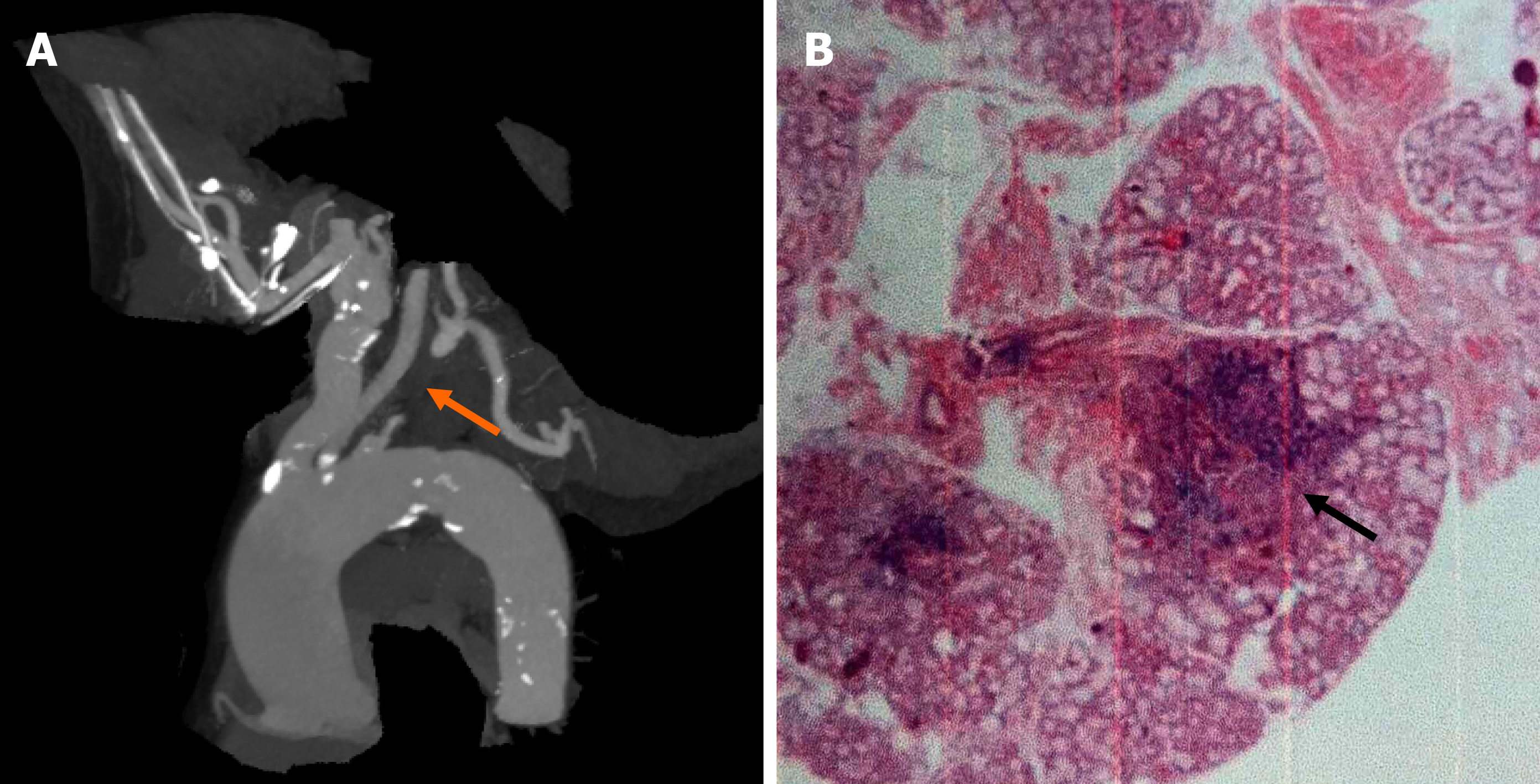 Figure 1 Results of labial gland biopsy and aortic angiography. A: Aortic angiography showing that the proximal part of the left subclavian artery was occluded, and a small ulcer of the aortic arch was formed; B: Salivary gland tissue showing chronic inflammation, including five lymphatic foci. 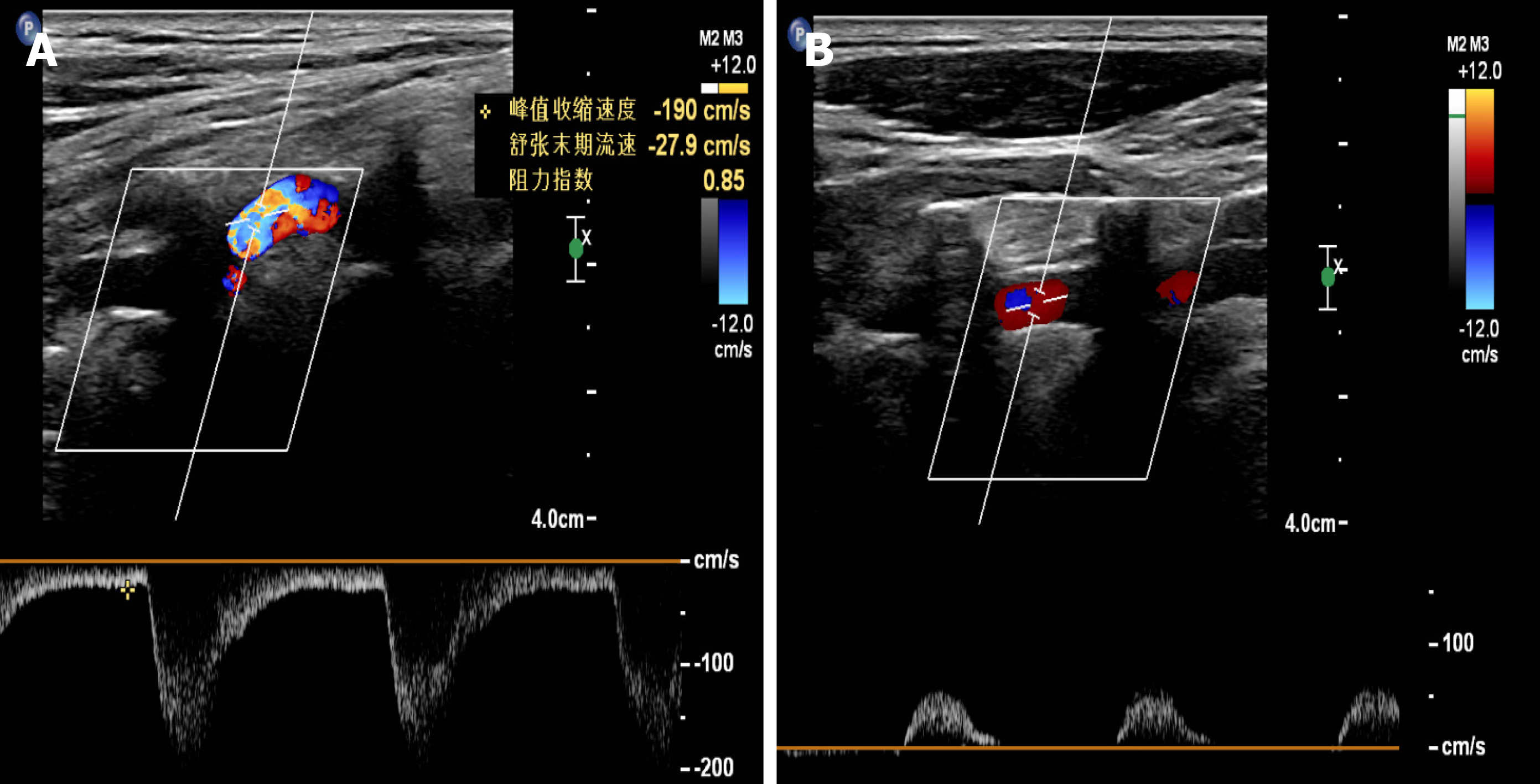 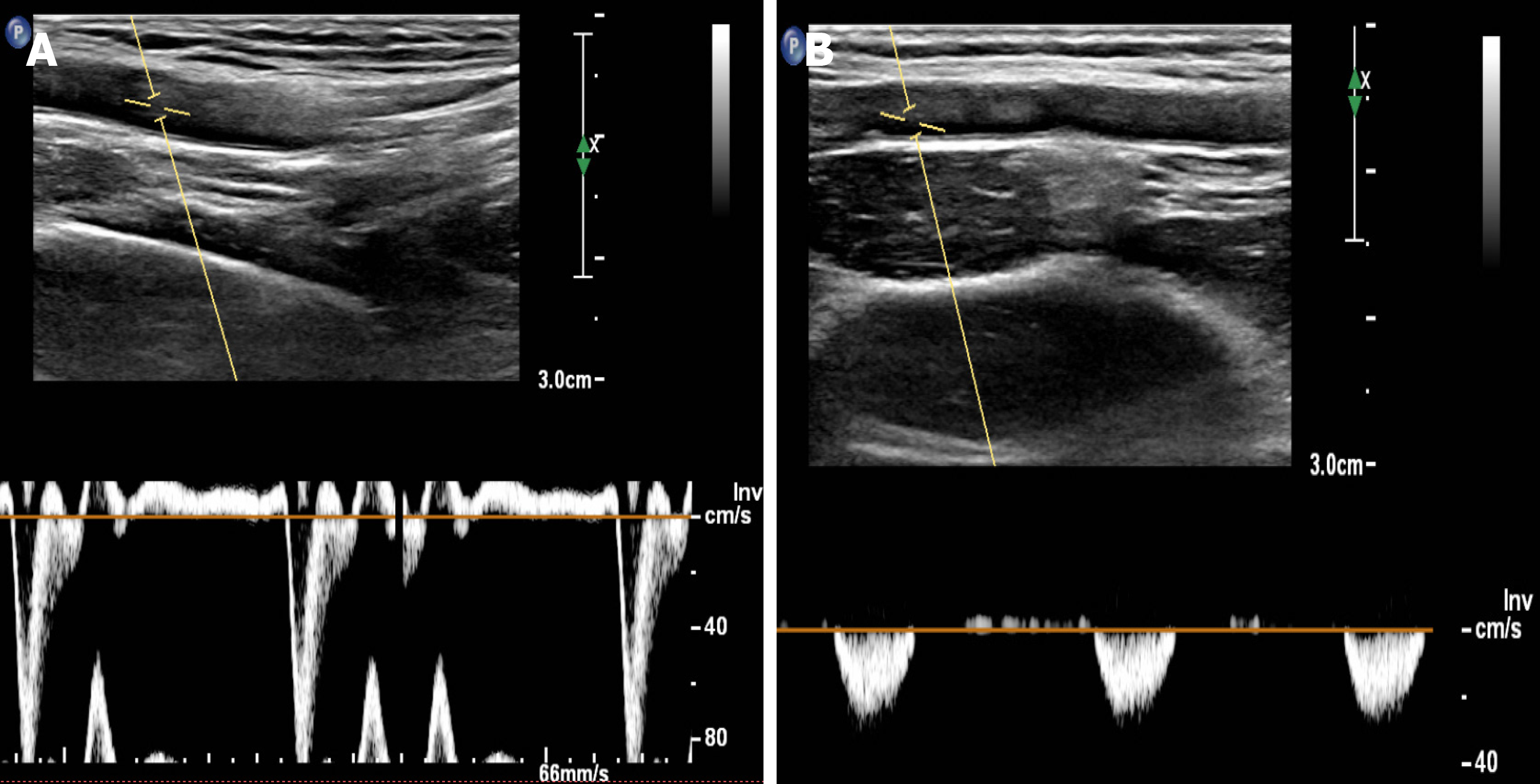 The patient was diagnosed with hypertension, cerebral infarction, proximal occlusion of the left subclavian artery, and Sjogren's syndrome based on symptoms, physical examination, and imaging.

The patient was treated with amlodipine 5 mg once a day for lowering blood pressure, aspirin 100 mg and clopidogrel 75 mg once a day, atorvastatin 20 mg every night for prevention of thrombosis, hydroxychloroquine sulfate 200 mg, and total glycosides of paeony capsules 300 mg twice a day for immunosuppressive treatment of Sjogren’s syndrome.

Subclavian artery stenosis is related to advanced age, high blood pressure, smoking, and hyperlipidemia. In particular, up to 10% of cardiovascular disease patients with low HDL cholesterol have subclavian artery stenosis[3]. It mostly occurs on the left side and is related to atherosclerosis in the left subclavian artery at the aortic arch branch. Therefore, atherosclerosis is the leading cause of SSS. Other causes include vasculitis, trauma, congenital arterial malformations, artery compression, occlusion, and subclavian aneurysms. The patient is an elderly man with a history of hypertension and risk factors for atherosclerosis, but his ESR was 36 mm/h, and vasculitis-related indexes were negative. ANAs were positive, and ANA titer was 1:320. Anti-histone antibody, Anti-dsDNA, ACA, anti-SS-B antibody, anti-Ro-52 antibody, and anti-SS-A antibody were all positive. Labial gland biopsy suggested that salivary gland tissue showed benign lymphoepithelial lesions, including five lymphatic foci. We consider that Sjogren's syndrome caused arteritis and vascular occlusion. Rheumatic diseases, especially the systemic inflammatory response associated with connective tissue diseases, are gradually considered to play a vital role in the occurrence and progression of atherosclerosis, which can lead to lipid abnormalities, increased oxidative stress, endothelial dysfunction, arterial stiffness increase, and insulin resistance, etc., promoting the advancement of atherosclerotic plaque[4]. Certain vascular lesions can cause bilateral SSS, such as polyarteritis and radiation arteritis[5], but they are sporadic. Yamanaka et al[6] once reported the case of a female patient with bilateral subclavian artery occlusion due to multiple arteries. The patient presented with severe dizziness, but the blood pressure was in the normal range and showed no significant difference. Computed tomography angiography (CTA) showed complete occlusion of the bilateral subclavian arteries from the proximal end to the origin of the vertebral artery. The prevalence of SSS is 6.4%[7], and it usually manifests as symptoms of posterior circulation ischemia, such as dizziness, hearing loss, or syncope[8]. Some patients may have symptoms due to exercises, such as numbness of the sidearm, ataxia, or angina. The symptoms of angina pectoris are common in patients who graft the left internal mammary artery as a coronary artery bypass grafting[5]. In this case, the patient developed dizziness, weakness, and pain in the left limb, and the symptoms were significantly aggravated during cold and weight-bearing. The physical examination showed that the bilateral upper arm systolic pressure difference was more than 20 mmHg. For patients with suspected SSS, imaging examinations can be used to confirm the diagnosis. The first choice of non-invasive imaging examinations is carotid artery color Doppler ultrasound, which has a diagnostic accuracy of > 95%. The patient's Doppler examination showed that the blood flow velocity of the distal subclavian artery slowed down, and the blood flow of the left vertebral artery was reversed, suggesting brain insufficiency. Second, CTA examination is an important means to confirm the diagnosis. The location of the lesion, the degree of stenosis, and the occlusion of the distal blood vessel in the patient was confirmed through the CTA examination. In addition, CTA is better than digital subtraction angiography in the diagnosis of calcified lesions, and its diagnostic specificity reaches 99%.

In terms of treatment, the patient had Sjogren’s syndrome and left subclavian artery occlusion. He was treated with the antiplatelet and immunosuppressive therapy of Sjogren’s syndrome. The NIH stroke scale has dropped to 0 points at the 90-d follow-up. In recent years, percutaneous transluminal stent angioplasty (PTA) has developed rapidly and is less invasive, and has become an important method for treating SSS. However, considering that the patient is in an active rheumatic stage, PTA surgery should be performed if necessary after the Sjogren’s syndrome is stable. The case reminds us that we need to pay attention to the blood pressure on both sides of the patients with weakness, dizziness, and blurred vision. When the bilateral upper arm systolic pressure difference was more significant than 10 mmHg, we need to be alert to SSS possibility[9]. Color Doppler ultrasound combined with CTA can be used to confirm the diagnosis. For patients with subclavian artery stenosis found by CTA and ultrasound, further angiography can be performed to confirm the diagnosis. For patients with high suspicion of the diagnosis, clinicians must conduct a detailed medical history and physical examination to find the cause of SSS and make a differential diagnosis. Patients can be treated with antiplatelet drugs. More aggressive intervention should be considered when there is an insufficient blood supply to the vertebrobasilar artery or symptoms of ischemia in the affected upper extremity.

SSS caused by Sjogren's syndrome is uncommon, and the patient's symptoms of dizziness and upper limb weakness were misdiagnosed as general cerebral infarction. Detailed history collection and physical examination are very important. A young patient with hypertension needs to measure bilateral blood pressure and examine the immunological indexes and aorta CTA to determine secondary hypertension factors.