The nonspecific clinical, radiological and pathological characteristics of gastric syphilis can establish it as an imitator of other gastric diseases. The absence of primary or secondary lubricating lesions should not prevent consideration of gastric syphilis.

A 63-year-old female patient presented to the hospital with dull pain in the middle and upper abdomen without apparent cause for one week, which was aggravated for two days. The patient had been sexually active with the same male partner for the past years, but her partner was promiscuous. Abdominal contrast-enhanced computed tomography (CT) and positron emission tomography/CT suggested gastric cancer. The gastroscopy revealed an antral gastric ulcer with gastric retention, and also suggested gastric cancer. But no cancer cells were found in the biopsies taken during the two gastroscopies. Treponema pallidum (T. pallidum) antibodies: ELISA positive, rapid plasma reagin titer 1:16. Hematoxylin and eosin (HE) stain showed macrophage infiltration in the lamina propria. Numerous spirochetes were observed by immunohistochemical staining using a monoclonal antibody against T. pallidum. The patient was finally diagnosed with gastric syphilis.

Syphilis is a sexually transmitted disease, and the earliest cases of syphilis were reported in the 15th century[1]. Most cases of syphilis are sexually acquired, and the clinical manifestations depend on the stage of the disease and the organs involved. Two-thirds of patients have no clinical findings of syphilis[2], which easily leads to misdiagnosis of other diseases, including infiltrating tumor, lymphoma and Crohn’s disease. Due to the rarity of the disease and the non-specific symptoms and signs, it is not well recognised by many physicians. Low incidence and nonspecific clinical presentation of gastric syphilis emphasize the importance of diagnostic suspicion[3]. Eighty-three percent of confirmed patients received penicillin and their symptoms resolved, while 17% of patients underwent surgical treatment due to complications or misdiagnosis of tumor or lymphoma[4]. In this article, we report a rare case of so serious misdiagnosis that the patient would have proceeded to surgical ward for surgery.

A 63-year-old female patient had dull pain in the middle and upper abdomen without apparent cause for one week, which was aggravated for two days.

The patient was previously healthy, and she had dull pain in the middle and upper abdomen without apparent cause from one week ago.

The patient had a previous cesarean section. She had no sexually transmitted disease in the past.

The birth history and feeding history were uneventful. There was no history of similar illness in the family.

On examination, the patient had tenderness in the upper abdomen, no rebound pain or muscle tension, negative shifting dullness and positive succussion splash.

Figure 3 The gastric wall of the antrum was thickened (orange arrow), and some enlarged lymph nodes (blue arrow) were seen in the abdominal cavity, retroperitoneum, and bilateral groin areas. 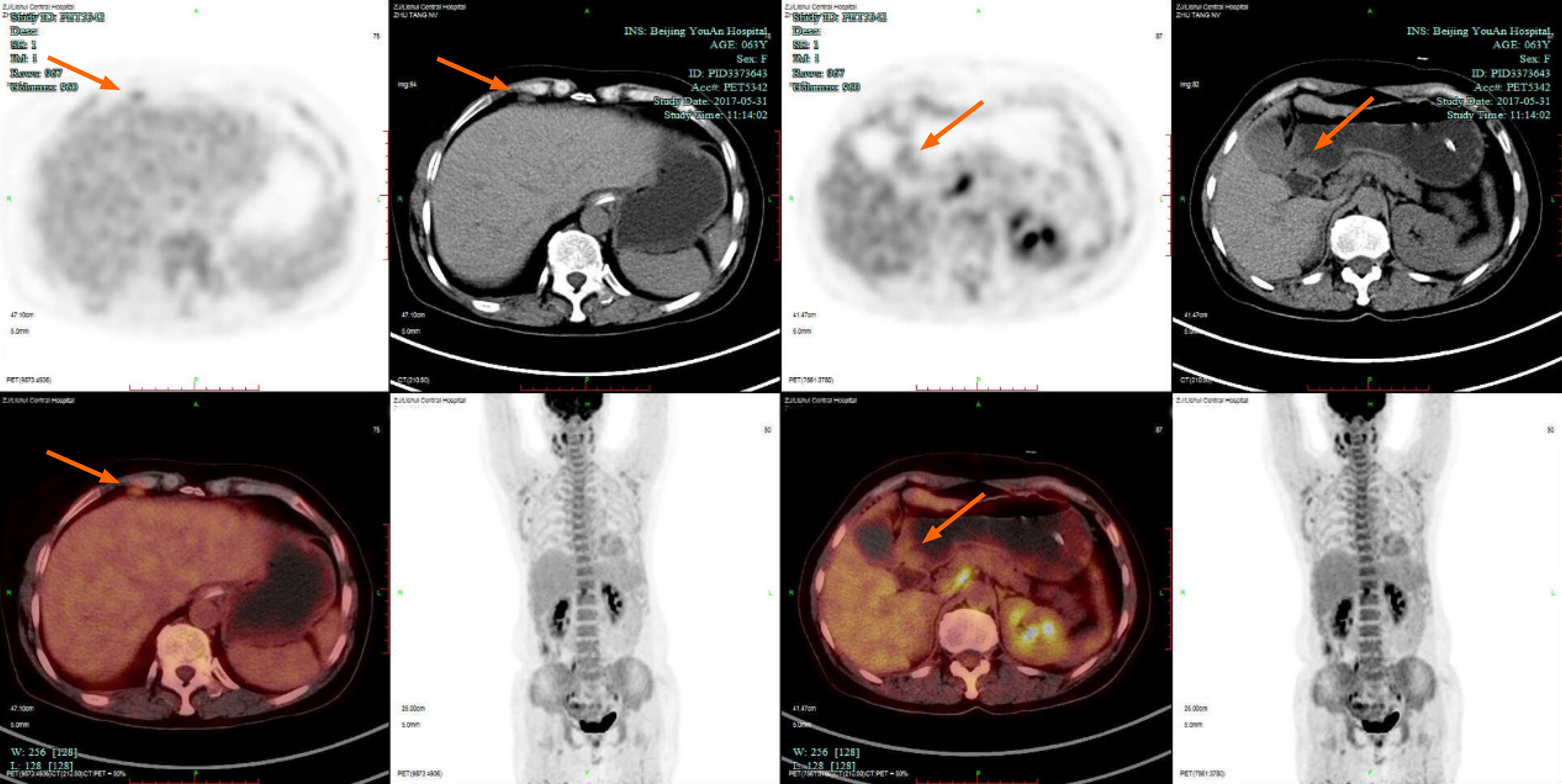 Figure 4 Positron emission tomography/computed tomography: The walls of the gastric antrum and pylorus were locally thickened, and the tracer uptake was increased. The maximum standardized uptake value was 2.4. Multiple lymphadenopathies (orange arrows) can be seen in the perigastric and left supraclavicular areas, right anterior diaphragm, right retroperitoneum, iliac vessels and pelvic area.

The patient was treated with a dose of 2.4 MIU penicillin once weekly.

The treatment led to resolution of her clinical symptoms, follow-up endoscopy was performed after onset of treatment and showed complete healing in patients (Figure 7). The rapid plasma reagin titer was 1:2.

Syphilis is caused by T. pallidum and is mainly transmitted through sexual contact. It often manifests as damage to the skin and sexual organs. There are few reports of damage to internal organs[5]. Gastric syphilis is caused by invasion of the stomach wall by T. pallidum, and it is a rare gastric disease. The most common symptoms are epigastric and abdominal pain or fullness, anorexia, nausea, vomiting, sore throat, myalgia, weight loss and early satiety[6]. Graham reported the first case of gastric syphilis after surgical resection in 1922[7]. Later on, autopsy statistics revealed a low incidence of the disease[8]. Mylona et al[4] conducted a systematic review of the English literature for cases of gastric syphilis in the last 50 years. The diagnostic methods for gastric syphilis include endoscopy, radiological examination and pathological diagnosis. Endoscopy shows that the gastric mucosal folds are thickened, and the mucosal surface is diffused with multiple erosions, shallow ulcers or nodules. The lesions most often involve the gastric antrum, and there are leather-like changes in the late stage[9]. According to the endoscopic findings, gastric syphilis can be divided into three types: Hemorrhagic, ulcerative and tumor-like. Histologically, gastric syphilis manifests as severe chronic active inflammation of the gastric mucosa, involving the submucosal layer, with visible crypt abscess, venule inflammation, granuloma, thickened submucosa, lymphocyte and plasma cell infiltration, intramucosal blood vessel wall thickening, surrounding inflammatory cell infiltration, and Warthin–Starry silver staining shows a large number of spirochetes[10]. Due to the lack of specific clinical symptoms, gastric syphilis is easily misdiagnosed as chronic gastritis, peptic ulcer, or even gastric cancer or lymphoma, leading to delays in treatment and even surgery, which causes great harm to the patient[11].

The reasons for the misdiagnosis of this patient were as follows: (1) The clinical manifestations of syphilis may vary greatly, because it can affect almost every organ; (2) Gastric syphilis is clinically rare, has no specific clinical symptoms, and is easily misdiagnosed as chronic gastritis, peptic ulcer, or functional dyspepsia. This patient was misdiagnosed with gastric cancer due to her age, long course of disease, and severe symptoms; (3) The patient had not previously been diagnosed with syphilis; (4) The patient was older and lacked understanding of early syphilis, such as hard chancre erosions that can heal in a short time, and the patient did not pay attention to it; and (5) Clinicians lack knowledge of syphilis in organs other than the genitourinary system, and digestive system syphilis is especially rare. In order to reduce missed diagnosis and misdiagnosis, clinicians should pay attention to the following points. Doctors and patients need to be aware of the possibility of stomach infections caused by syphilis. When the patient has clinical symptoms such as nonspecific abdominal pain, fullness, nausea, and loss of appetite, whether the patient has a history of chronic gastric disease in the past, and cannot be explained by other common digestive tract diseases, they should be alert to the possibility of gastric syphilis. In the present case, the results of gastroscopy and biopsy were not consistent with chronic gastritis, peptic ulcer, gastric cancer, gastric lymphoma, and eosinophilic gastritis. In particular, purulent secretions were seen by endoscopy, and a large amount of neutrophil infiltration was seen under the microscope, as well as pus cells, suggesting the possibility of infection, including with T. pallidum. The diagnosis needs to be combined with a complete medical history, including a history of sexually transmitted diseases, a comprehensive physical examination and a high degree of suspicion, with attention paid to protecting the privacy of the patient. Patients often conceal their sexual history, which increases the difficulty of diagnosis of gastric syphilis. The patient’s medical history, clinical, imaging, endoscopic and histological findings, and endoscopic biopsy specimens with Warthin–Starry silver staining to visualize spirochetes can clearly diagnose gastric syphilis (Figure 8). In addition to routine pathological examinations, direct immunofluorescent staining of gastric mucosal biopsy tissues and reverse transcription polymerase chain reaction can also be used to directly detect T. pallidum[12]. 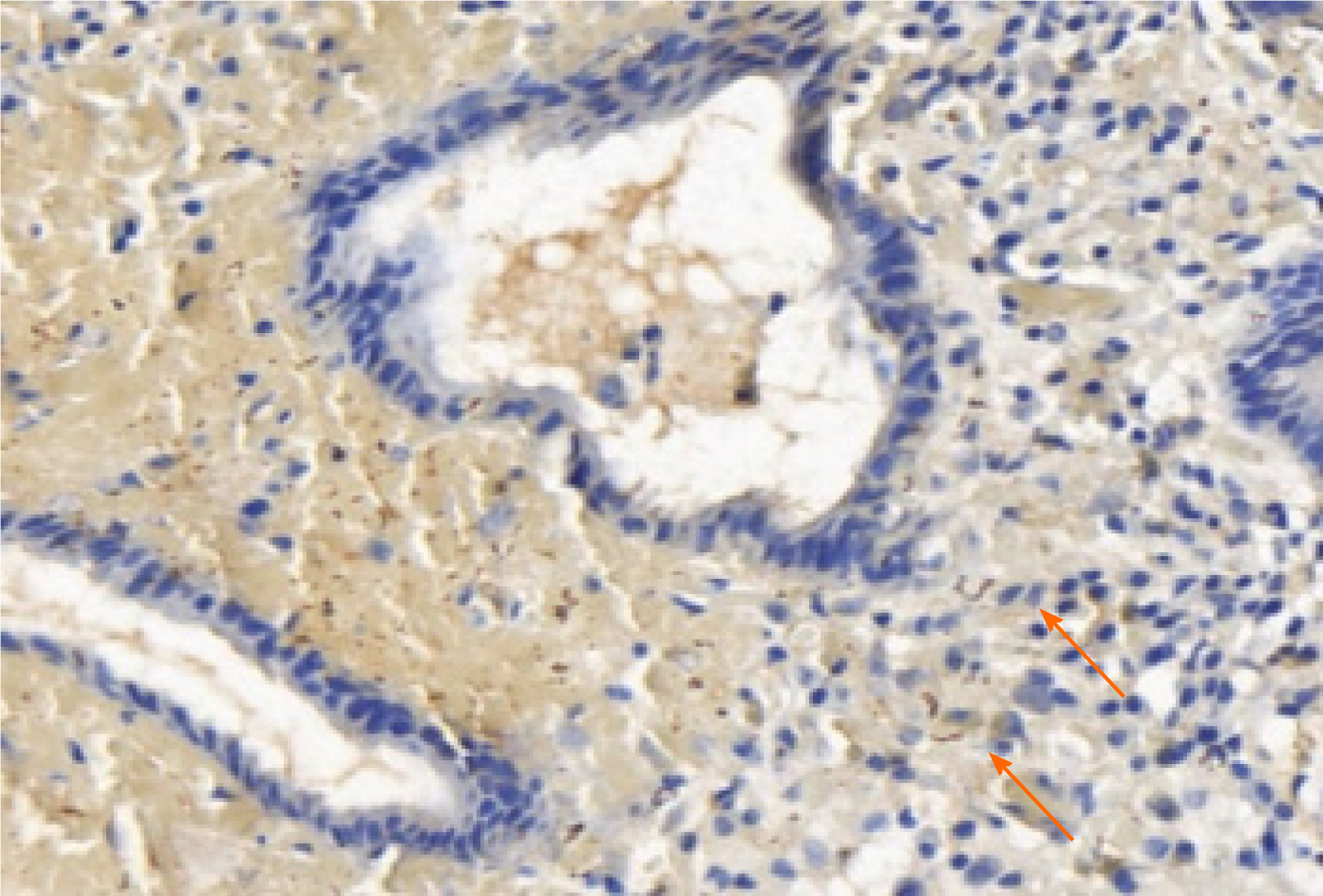 In the early stage of gastric syphilis, medical treatment should be actively performed. Penicillin has a significant effect on syphilis. After anti-syphilis treatment, the patient’s clinical, endoscopic and histological manifestations can be quickly relieved. The application of proton pump inhibitor (PPI) and histamine 2 receptor antagonist on the basis of anti-syphilis treatment can promote the healing of gastric mucosal erosion and ulcers. After diagnosis of gastric syphilis, our patient was given benzathine penicillin intramuscularly. The clinical symptoms and endoscopic histological symptoms disappeared.

Our case of patient has a large and irregular gastric ulcer, which is difficult to distinguish from gastric cancer under endoscopy. Pathological biopsy is necessary to confirm Gastric syphilis is unusual with vague symptoms. After immunohistochemistry and inquiring about a history of syphilis, it was confirmed as gastric syphilis. gastric syphilis can be easily misdiagnosed as ordinary gastritis, gastric ulcer or even gastric cancer, if its microscopic pathological characteristics (a vast number of plasma cells and vasculitis) or HE filming results aren't representative enough. When necessary, gastric spirochete syphilis immunohistochemical staining or real-time fluorescent PCR detection can be used in the diagnosis making of spirochete syphilis.