Research Domain of This Article
Anesthesiology

To observe whether DEX promotes bowel movements in patients after laparoscopic nephrectomy.

Postoperative ileus (POI) is a perplexing problem for clinical surgeons. It occurs not only after abdominal surgery but also after any surgery that requires general anesthesia[1,2]. POI is defined as the dysfunction of gastrointestinal motility after surgery, characterized by a decrease in, or stagnation of, intestinal peristalsis. Common clinical manifestations include abdominal pain, abdominal distention, nausea, vomiting, delayed flatus, delayed defecation, and inability to consume orally[3-5]. POI is an uncomfortable experience, enhances the possibility of postoperative complications, prolongs hospital stay[4], and increases the economic burden[6,7]. Postoperative gastrointestinal function recovery is of great concern. There is currently an urgent need to improve postoperative recovery of gastrointestinal function.

The mechanism of POI varies, including autonomic regulation, inflammatory response, gastrointestinal hormones, and postoperative use of opioid drugs. Surgical gut damage destroys the intestinal barrier, stimulates the sympathetic and parasympathetic nervous system, and enhances the release of inflammatory factors[1,5,8,9]. These factors precipitate the occurrence of POIs. The current use of laparoscopic techniques can reduce incision size and surgical trauma, enabling careful manipulation[10-12]. Thus, the influence of the surgical procedure itself has decreased. Some studies have shown that intraoperative use of short-acting opioids or postoperative use of opioid receptor antagonists can ensure postoperative analgesia and eliminate the impact of intraoperative use of opioids on POI. Adjuvant epidural analgesia, intraoperative restriction of fluid intake, reduction of intraoperative blood loss, and early oral administration of nutrients after surgery can promote POI recovery[13]. However, POI remains a medical problem during clinical surgery; therefore, a more effective and noninvasive method is required.

Dexmedetomidine (DEX), as a highly selective α-2 adrenergic receptor agonist, has the effects of synergetic analgesia, sedation, inhibition of sympathetic hyperactivity, and reduced release of inflammatory mediators with little respiratory inhibition[13,14]. Previous studies on POI were all based on gastrointestinal tract surgery. Hence, in the present study, laparoscopic nephrectomy was chosen to investigate postoperative gastrointestinal function recovery, avoiding damage to the gut itself. Based on the reported effects of DEX, we hypothesized that DEX could promote postoperative gastrointestinal function.

This randomized, double-blinded, controlled trial was approved by the Institutional Medical Ethics Committee of Qilu Hospital of Shandong University. It was registered at chictr.org (ChiCTR-IPR-15007628) and is in accordance with the CONSORT guidelines. We chose patients who were treated by laparoscopic nephrectomy under general anesthesia at Qilu Hospital and did not have the following conditions: Body mass index greater than 32 kg/m2 or less than 18 kg/m2; age older than 75 or younger than 18 years; presence of bradycardia [basal heart rate (HR) less than 60 bpm] or other cardiac arrhythmia; presence of clinically significant dysfunction, including cardiovascular, renal, or hepatic diseases; previous history of chronic pain or long-term use of analgesics (at least 3 mo); or allergy to the test drug. This trial was initiated in January 2016 and terminated in December 2017.

The patients who met the enrollment criteria provided informed consent for participating in the trial. Then, according to a computer-generated randomization table, participants were randomly assigned to one of the three groups: C (normal saline infusion), D1 (DEX 0.02 µg/kg/h), and D2 (DEX 0.04 µg/kg/h). On the day of surgery, the drugs and patient-controlled analgesia (PCA) were prepared by an anesthetist who was blinded to the group assignment. Furthermore, the associated doctors and nurses were blinded to group assignment.

After obtaining a baseline measurement of HR and MBP, groups D1 and D2 received 0.5% DEX, and group C received 0.9% normal saline for 10 min. We used propofol, rocuronium, and sufentanil for sequential induction. The laryngeal mask airway (LMA) was intubated after positive pressure mask ventilation for 5 min. An arterial cannula was required to monitor invasive arterial blood pressure in the left radial artery. Anesthetic depth was monitored using a bispectral index (BIS) monitor, and sevoflurane was administered to maintain the depth of anesthesia (BIS scores in the range of 40 to 60). Controlled ventilation was performed with 100% oxygen, and EtCO2 was maintained at 35–40 mmHg. We inserted a temperature probe through the nasal cavity and maintained the body temperature at 36–37 °C. We started to infuse the test drugs (groups D1 and D2 received the DEX infusion at rates of 0.2 μg/kg/h and 0.4 µg/kg/h, respectively, while group C received saline instead of DEX) after the establishment of pneumoperitoneum and suspended them for 30 min before the end of surgery. Rocuronium was administered intermittently to maintain satisfactory muscle relaxation.

If more than a 20% fluctuation in the MBP baseline level was detected, vasoactive drugs (noradrenaline 5-10 µg or nitroglycerin 50-100 µg) were used to maintain hemodynamic stability. If the HR decreased to less than 45 bpm, atropine 0.5 mg was administered. Conversely, if the HR was greater than 100 bpm, esmolol 0.5 mg/kg was administered to decrease the HR. When the laparoscope was withdrawn, palonosetron (0.25 mg) was intravenously administered to prevent postoperative nausea and vomiting (PONV). When spontaneous breathing appeared at the end of the surgery, neostigmine 0.04 mg/kg and atropine 0.02 mg/kg were administered to antagonize neuromuscular blockade before LMA extubation. If the SpO2 was greater than 90% without oxygen for at least 5 min, patients could be sent back to the ward.

Statistical analyses were performed using SPSS software (version 21.0, SPSS Inc. Chicago, IL, USA). The Kolmogorov-Smirnov test was used to assess the distribution of the variables. Levene’s test was used to compare the homogeneity of variance among the three groups. Normally distributed data are expressed as the mean and standard deviation, whereas data with a skewed distribution are expressed as the median and number (n). Percentages (%) are used to represent categorical data. Parameters such as age, operation time, anesthesia time, time to first flatus and defecation, MBP, and HR among these groups were compared using two-way analysis of variance. The Mann-Whitney test was used to evaluate the NRS scores among the three groups, and adverse reactions were analyzed using the χ2 test. Multiple comparisons were performed using the LSD post-hoc test. Statistical significance was set at P < 0.05.

A total of 123 patients were randomly distributed into three groups. Among the patients, two were eliminated due to conversion to open nephrectomy (one from group D1 and one from group D2). In addition, one patient was excluded after surgery because of incomplete clinical data (from group C) (Figure 1). The baseline characteristics and demographics of the patients were comparable among the three groups (Table 1). 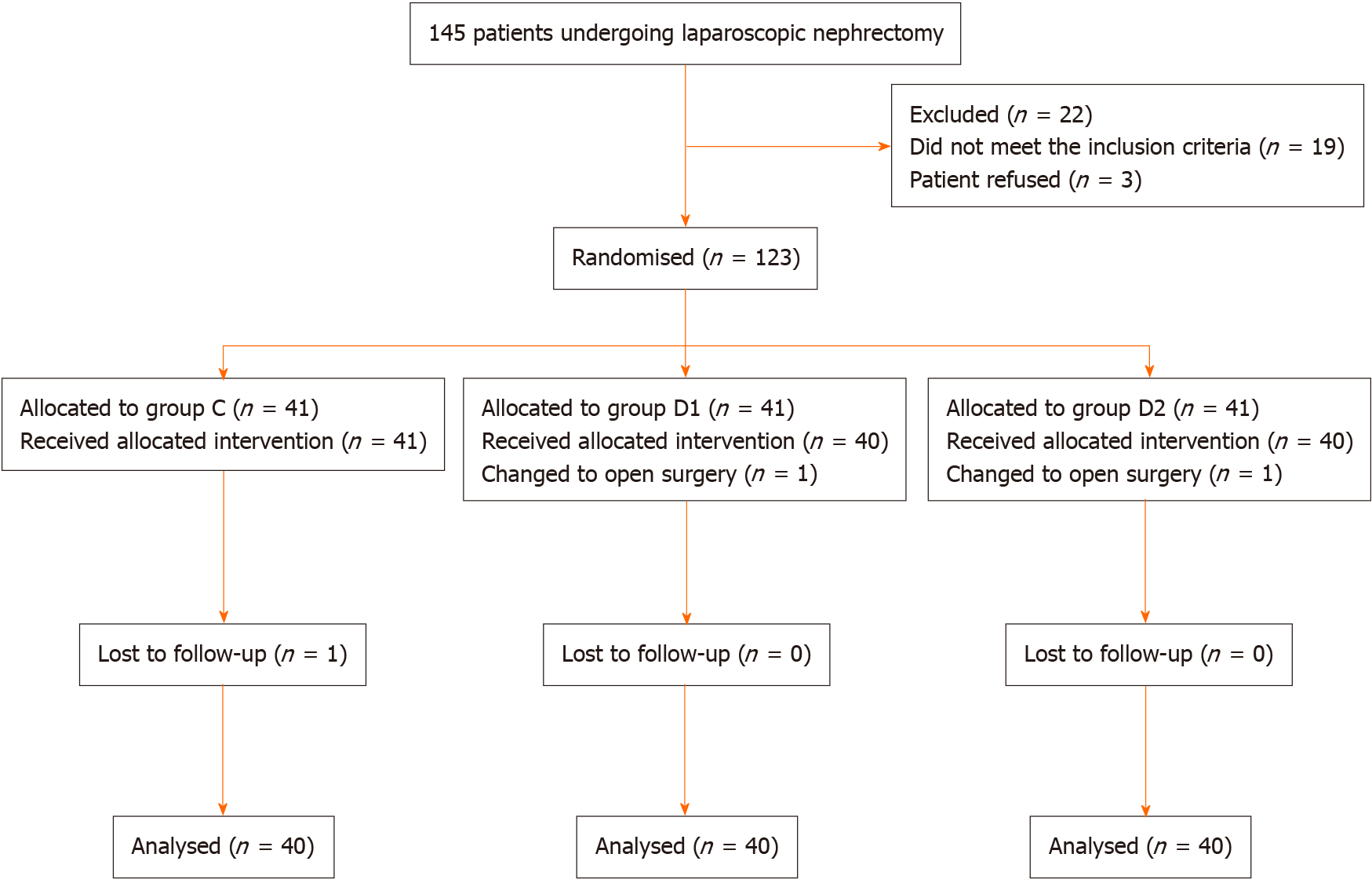 Figure 1 Patient enrolment flow diagram. This illustrates the flow of all patients screened, excluded, and randomized. 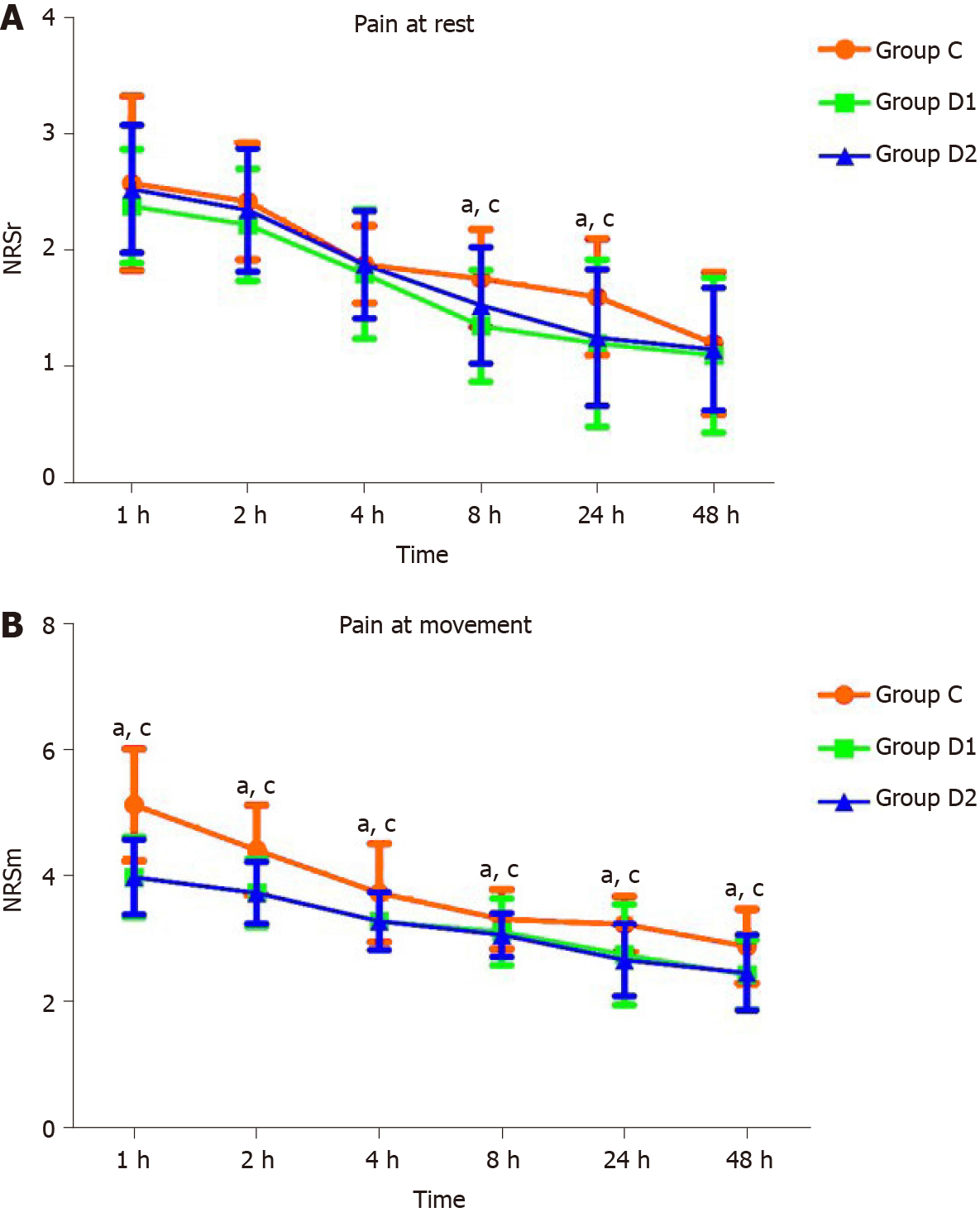 Adverse effects were not significantly different among the three groups (P > 0.05; Table 4).

The perioperative use of 0.04 µg/kg/h DEX enhanced the recovery of postoperative gastrointestinal function in our study.

Experts agree that patients with POI present with several related symptoms, such as abdominal pain and distension, nausea, vomiting, absence of normal bowel sounds, intolerance of oral intake, and difficulty in defecation[15]. We did not observe the time at which bowel sounds occurred in our study because such data is subjective.

POI occurs temporarily after surgery and is not caused by mechanical reasons[15]. The mechanism of POI is complicated and involves many factors, in particular, the regulation of sympathetic and parasympathetic nerves, the inflammatory response, and postoperative use of opioid drugs. In this study, we observed the influence of DEX on the postoperative outcomes of nephrectomy to avoid gut damage.

Visualizing laparoscopic surgery and pneumoperitoneum induction can lead to sympathetic nerve activation[16,23]. In addition, CO2 pneumoperitoneum can induce hypercarbia, which can directly or indirectly stimulate the sympathetic nervous system and cause elevated levels of catecholamines[16,24]. These factors lead to greater excitability of sympathetic nerves than parasympathetic nerves. Subsequently, gastrointestinal function is inhibited, and POI occurs. DEX, a highly selective α-2 adrenergic receptor agonist, acts on α2-adrenoceptors in the central nervous system to reduce sympathetic nerve activation and decrease catecholamine secretion[24,25]. DEX has been proven to attenuate sympathetic nerve activation induced by pneumoperitoneum and surgical stress[26], and to decrease the inflammatory response[20] to facilitate postoperative bowel movements. Groups D1 and D2 had significantly shorter times to flatus and defecation in our study than group C. Although group D2 had shorter times to flatus and defecation than group D1, and the difference was not significant for patients in the clinic, the observed 1-h difference is still important. This study provided evidence for the relief of postoperative gastrointestinal function in patients undergoing endoscopic surgery.

The blood vessels contracted when DEX was administered as a bolus, and hypertension was observed in the first 1-3 min. Hypertension has been observed but not measured in other studies, and when DEX was used as an infusion drug, its central sympatholytic effect was the main effect[32,33]. The incidence of bradycardia and hypotension (requiring treatment) was increased only when a loading and maintenance dose of DEX > 0.07 µg/kg/h was given to critically ill patients[34]. The HR and MBP were significantly lower but without evidence of bradycardia and hypotension after treatment with the loading dose of DEX in our study. The infusion of DEX during anesthesia resulted in medium variations in MBP and HR among the three groups, but the difference was not significant. These findings are in accordance with those of previous reports[35,36]. There was no significant difference in HR and MBP among the three groups; therefore, the two doses of DEX used were both safe for the patients.

Our study had some limitations. First, DEX was administered at a rate of 0.5 mg/kg for 10 min before the induction of anesthesia and then at a rate of 0.2 to 0.4 μg/kg/h during the operation. However, we were unable to determine the effect of plasma DEX concentrations on intraoperative hemodynamics because we did not measure the serum concentrations of DEX at any time point. Finally, laparoscopic nephrectomy was performed using two different surgical methods: Transabdominal and retroperitoneal. Therefore, different surgical techniques might have had different effects on postoperative analgesia and recovery of gastrointestinal function.

Perioperative DEX infusion at 0.04 µg/kg/h resulted in better and faster recovery of gastrointestinal function and a more favorable analgesic effect without additional adverse effects in patients who underwent laparoscopic nephrectomy.

Postoperative ileus (POI) is a perplexing problem for clinical surgeons. POI occurs not only after abdominal surgery, but also after any other surgery that requires general anesthesia.

Perioperative DEX infusion at 0.04 µg/kg/h resulted in better and faster recovery of gastrointestinal function and a more favorable analgesic effect without additional adverse effects in patients who underwent laparoscopic nephrectomy.