A retrospective case-control analysis was performed on 138 CBD stones patients with a history of Billroth II gastrectomy, who underwent therapeutic ERCP for stone extraction at our center from January 2011 to October 2020. CBD morphology and other predictors affecting CBD stone recurrence were examined by univariate analysis and multivariate logistic regression analysis.

As endoscopic retrograde cholangiopancreatography (ERCP) is widely performed for the treatment of choledocholithiasis in Billroth II anatomy patients, the complications after ERCP gradually reveal. The recurrence of choledocholithiasis, as one of the long-term complications, is still a challenging problem[1-4]. As reported, the recurrence rate of common bile duct (CBD) stones after therapeutic ERCP was 2%-22%[5-8], and once CBD stones recurred, the next recurrence rate increased with the number of recurrences[9].

Patients with surgically altered anatomy, such as a Billroth II gastrectomy, might have an altered CBD morphology, which makes the operation of ERCP more complicated, the success rate decrease, and the recurrence rate increase[10]. Thus, we speculated that there is a potential association between CBD morphology and CBD stone recurrence. By searching the literature, we found potential factors for stone recurrence, including age, periampullary diverticulum (PAD), CBD diameter, CBD stone diameter, multiple CBD stones, endoscopic biliary sphincterotomy (EST), endoscopic papillary large balloon dilation (EPLBD), endoscopic papillary balloon dilation (EPBD), EST with balloon dilation (ESBD), cholecystectomy, and CBD angulation[11-15]. In the present study, CBD morphology was defined as the cholangiogram morphology from the confluence of the left and right hepatic ducts to the distal CBD entering the duodenum. We classified the CBD morphology into straight type (Figure 1A and B), S type (Figure 1C and D), and polyline type (Figure 1E and F) and explored whether different shapes of CBD and other factors influence CBD stone recurrence after successful endoscopic therapy in Billroth II anatomy patients. 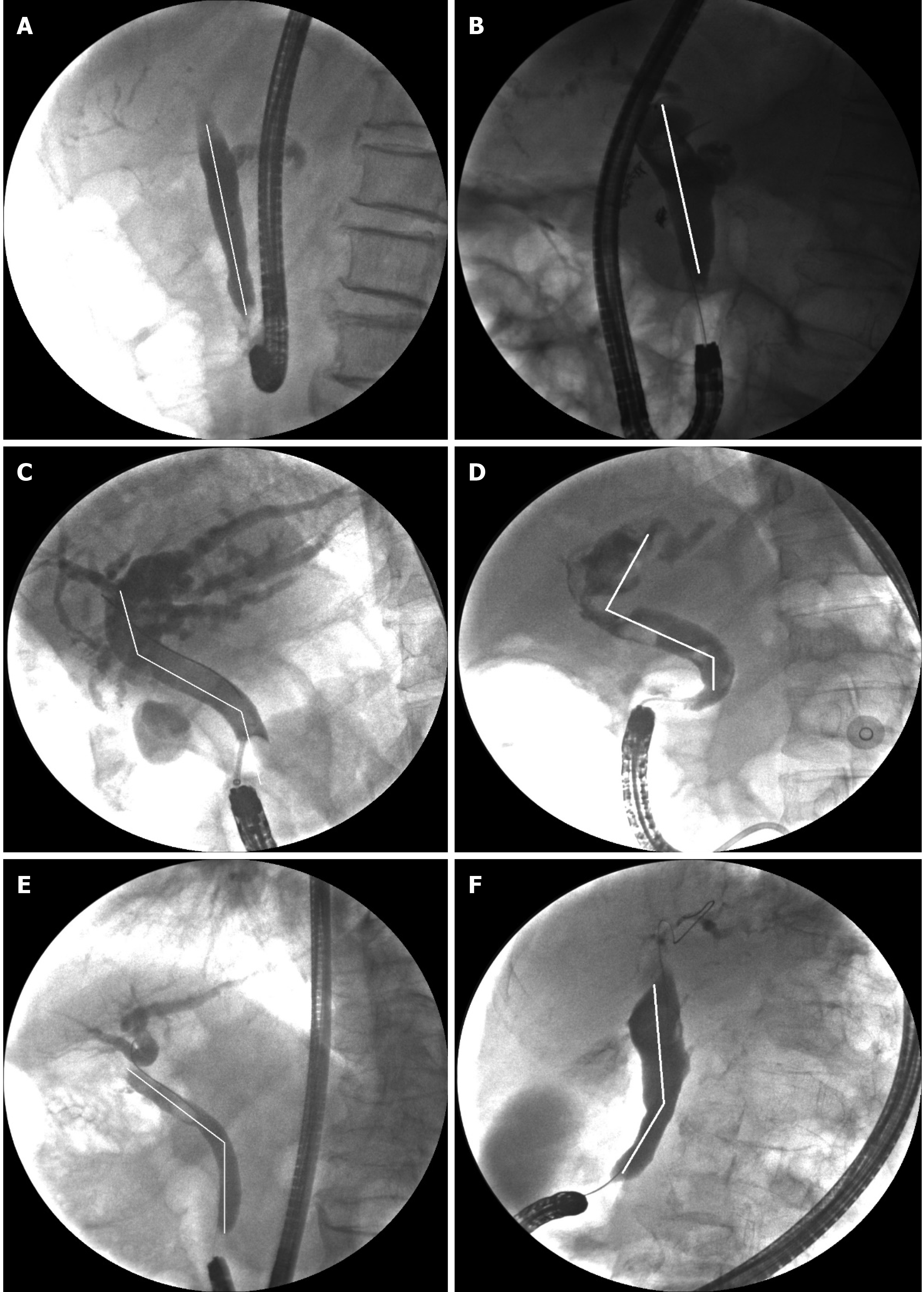 Stone recurrence was defined by the presence of CBD stones at least 6 mo after previous CBD stones were entirely removed by ERCP. At least two stone recurrences defined multiple recurrences after the first ERCP[16]. Patients who visited our hospital had their CBD stones confirmed by abdominal computed tomography and ERCP. From January 2011 to October 2020, 629 patients with a history of Billroth II gastrectomy underwent successful ERCP for CBD stones at the General Hospital of Northern Theater Command. The exclusion criteria were as follows: (1) Patients without specific stones during the ERCP; (2) patients with tumors of the duodenal papilla, CBD, gallbladder, or liver; (3) patients who had not removed their stones completely after the first ERCP; and (4) patients with incomplete clinical data. A total of 138 patients who underwent complete stone removal were enrolled, and 27 of them recurred up.

All ERCP procedures were performed by experienced endoscopists with at least 500 cases. In our institution, prophylactic antibiotics are used in patients without evidence of cholangitis before ERCP. ERCP was served with a side-viewing duodenoscope (JF-240/260, TJF-240/260; Olympus Medical, Tokyo, Japan), a forward-viewing gastroscope (Olympus GIF-H260/Q260), or a forward-viewing colonoscope (Olympus CF-H260/Q260) after the patient was sedated with intravenous dexmedetomidine, midazolam, and propofol in the left lateral decubitus position. Briefly, the operator completed the wire-guided biliary cannulation with a double-lumen sphincterotome. Precut sphincterotomy or double-wire technique was prepared for difficult biliary cannulation. As selective biliary cannulation was achieved, depending on CBD stones, the operator executed the therapeutic intervention, which included EST, ESBD, and EPLBD. On cholangiogram, the CBD diameter and CBD stone diameter were determined by calculation with the ratio to the diameter of the duodenoscope, and the CBD morphology was determined by the operator before stone removal. After the therapeutic intervention, the operator chose to remove stones with a retrieval balloon and/or a basket with or without mechanical lithotripsy. The CBD stones were regarded as completely removed when all the present endoscopists agreed on the absence of a stone. The CBD morphology was confirmed again by the other operator on the last cholangiogram.

Assessed factors included the CBD morphology, the diameter of CBD, and the largest stone, which were measured from the cholangiogram under the condition of complete contrast injection, with the patient placed in the left lateral decubitus position. CBD morphology was determined by at least two operators before and after the operation. CBD morphology was classified as straight type, S type, or polyline type according to the shape of CBD from the endoscopic view: Straight type, the CBD was straight without bending; S type, the CBD was S-shaped with two bends; polyline type, the CBD had one bend.

Statistical analyses were performed with SPSS 26.0. Categorical data are reported as frequencies (%), and continuous data are reported as the median (range) or mean ± SD. Student’s t-test was used for continuous variables and Fisher’s exact test or χ2 test for categorical variables. Independent risk factors were analyzed by multivariate logistic regression analysis with a forward likelihood ratio. P < 0.05 was considered statistically significant.

A total of 138 patients with Billroth II anatomy who underwent ERCP between January 2011 and October 2020 were retrospectively identified from the collected database, with a follow-up period of 54.4 ± 32.6 mo. The average age was 72.3 years old, and 107 (77.5%) patients were male. The recurrence rate was 19.6% (27/138). No statistically significant differences were observed in patient characteristics between the recurrence and non-recurrence groups, which included age, sex, CBD diameter, largest CBD stone diameter ≥ 1.2 cm, CBD stone number ≥ 2, muddy stones, initial ampullary intervention (EST, EPBD/EPLBD, and ESBD), and cholecystectomy (Tables 1 and 2).

Patient characteristics according to CBD morphology

Patient characteristics according to multiple recurrences

ERCP for CBD stones removal has always been a challenge in patients with Billroth II anatomy, and altered anatomy increases the difficulty of the operation and the incidence of complications. However, potential factors for CBD stone recurrence have not been thoroughly defined. To date, there has been no report concerning a specific description of CBD morphology and the connection between CBD morphology and CBD stone recurrence. This study investigated whether different shapes of CBD and other factors influence CBD stone recurrence after successful ERCP. Furthermore, this is the first report to introduce the new concept of CBD morphology, which was classified into straight type, S type, and polyline type.

In multivariate analysis, CBD morphology and CBD diameter ≥ 1.5 cm were the two independent risk factors for the recurrence of CBD stones in Billroth II anatomy patients. More specifically, the recurrence rate of patients with S type was higher than that of patients other types. As reported, bile stasis is an essential factor in the pathogenesis of CBD stones, which can also contribute to CBD infections[17]. Beta-glucuronidase changes bilirubin hydrolysis to nonconjugated, and calcium combines with nonconjugated bilirubin easily, which promotes bilirubin calcium formation and stone recurrence[18].

Different shapes of the CBD enter the duodenum at different angles. The straight type CBD enters the duodenum at an acute angle, while the S type and polyline type angles are close to a right angle. Due to the dysfunction of the sphincter of Oddi, CBD that enters the duodenum at a right angle is more prone to intestinal fluid reflux. Because intestinal fluid contains digestive juices, food residues, and a large number of bacteria, once reflux occurs, it causes the bile duct loop change and predisposes to bile duct infection[19].

Some prospective studies indicated that CBD diameter could predict the further recurrence of stones[11,21,22]. And they assumed that a dilated CBD could promote the formation of stone because of bacterial contamination and bile stasis. In our study, CBD diameter ≥ 1.5 cm was the independent risk factor of recurrence, which supported the assumption.

Our study noted that the presence of PAD was not an independent risk factor for the recurrence of CBD stones in multivariate analysis. PAD is known to induce functional biliary stasis because of inducing reflux of duodenal contents or compression of the distal CBD[23]. However, the effect of PAD on bile stasis is thought to disappear after ampullary interventions such as EST; PAD may not induce the CBD stone recurrence.

By analyzing the procedure time of patients with successful stone removal, we noted that the average procedure time of S type patients was significantly longer than that of the other two groups. However, it did not reach a statistical difference. According to the result, we considered the hypothesis that CBD morphology is a predictive factor for successful CBD stone removal, difficult endoscopic operation, and complications. Starting from this point, we investigated the detailed association between CBD morphology and endoscopic therapy.

Although we cannot change the shape of CBD by surgery or ERCP, prophylactic therapy may be effective in preventing the recurrence of CBD stones. Ursodeoxycholic acid (UDCA) is known to improve bile excretion, and may suppress the CBD stone recurrence by improving cholestasis. Some studies reveal that UDCA facilitates the extraction of CBD stones or effectively reduces the diameter of stones[29,30]. According to the report that excluded patients after gastrectomy by Yamamoto et al[31], UDCA may be a therapeutic option to prevent CBD stone recurrence. Moreover, UDCA treatment for 6 mo after LSG effectively prevents cholelithiasis[32-34]. However, some studies did not recommend the use of UDCA to prevent CBD stone recurrence[12,35]. Therefore, further exploration of UDCA with a more significant number of subjects will be required in the future.

In the current study, the assessment of CBD morphology was on a two-dimensional plane. Compared with a more accurate three-dimensional plane, this actually may lead to bias[20]. In our study, the patients were placed in the left lateral decubitus position to eliminate bias regarding position change. The accuracy of CBD morphology assessment could be improved in future prospective studies.

In conclusion, ERCP in unique shapes of CBD, such as S type and polyline type, is challenging and requires careful assessment and other treatment options before the endoscopic procedure. CBD morphology of S type and polyline type should be regarded as a high risk factor for stone recurrence. It is beneficial to identify Billroth II anatomy patients for preventing serious complications, such as CBD stones.

Endoscopic retrograde cholangiopancreatography (ERCP) is the first choice for removing common bile duct (CBD) stones in Billroth II anatomy patients. The risk factors for CBD stone recurrence after ERCP have been discussed for many years. However, CBD morphology had never been noticed as a potential risk factor.

Our study introduced the new concept of CBD morphology on the cholangiogram and classified it into straight type, S type, and polyline type.

The objective of this study was to evaluate CBD morphology and other predictors affecting CBD stone recurrence in Billroth II gastrectomy patients.

We performed a retrospective case-control analysis of CBD stones patients with a history of Billroth II gastrectomy, and there were 138 patients who underwent therapeutic ERCP at our center from January 2011 to October 2020. We examined the possible predictors of CBD stone recurrence by univariate analysis and multivariate logistic regression analysis.

Future research with more samples should be undertaken to assess the association between CBD morphology and CBD stone recurrence in patients with or without Billroth II gastrectomy. And periodic surveillance and standard prophylactic therapy should be explored.

We thank all medical staff and technicians of digestive endoscopy center who participated in this study.