A 54-year-old female patient was admitted to our hospital complaining of edema on her left lower limb. Physical examination revealed multiple superficial lymphadenectasis on her neck and pelvis. Color ultrasonography examination showed multiple uterine fibroids and a solid mass at the lower left side of the abdomen. Pathological biopsy revealed Burkitt lymphoma. After three hyper-CVAD (A + B) regimens, she achieved complete remission. Two years later, lymphadenectasis reoccurred. A relevant biopsy confirmed the diagnosis of peripheral T-cell lymphoma, which was accompanied by gastrointestinal invasion and hemocytopenia. Meanwhile, bone marrow examination revealed AML. On the second day of scheduled treatment, she developed gastrointestinal bleeding, peptic ulcers, and hemorrhagic shock and was critically ill. She was then discharged from the hospital due to financial concerns.

This is the first report of secondary peripheral T-cell lymphoma and AML after Burkitt lymphoma treatment with heterochronous and synchronal multiple primary cancers.

Core Tip: Frequently, secondary malignancies are not identified in a timely manner or are misdiagnosed. Literature indicates that secondary malignancies occur sporadically and spread gradually. The survival time for secondary cancer depends on the extent of tumor lesions than the number of tumors. This paper presents a rare case of secondary cancer to provide a complete understanding to the medical staff allowing them to make early diagnoses and initiate rational and integrated treatments to prolong the survival time and improve the prognosis.

Multiple primary cancer (MPC) refers to two or more simultaneous or sequential occurrences of primary malignant tumors in the same individual arising from different sites and/or with different histology or morphology[1]. Depending on the time interval between two cancer occurrences, MPC can be classified as synchronous (occurrence of two cancers detected simultaneously or sequentially within a time interval of ≤ 6 mo) or heterochronous (occurrence of two cancers detected sequentially within a time interval of > 6 mo)[1]. MPCs are always reported as two or more solid cancers[1-4], sometimes as secondary malignancies following nonsolid cancer treatment[1]. However, both lymphoma and leukemia secondary to lymphoma treatment are rare. This report presents a rare case of secondary peripheral T-cell lymphoma not otherwise specified (PTCL-NOS) and acute myeloid leukemia (AML) after treatment for Burkitt lymphoma and a review of the relevant MPC literature to understand the clinical features, pathogenesis, treatment and prognosis of MPC.

A 54-year-old woman was admitted to our hospital with a complaint of edema on her left lower limb on April 7, 2017. The patient showed no signs of abdominal pain, abdominal distension, low fever, night sweats, fatigue, frequent urination, urgent urination, dysuria, abnormal vaginal bleeding or discomfort owing to vaginal discharge.

She was fit and had no history of exposure to chemicals or radiation.

She had no specific personal or family medical history.

Physical examination revealed multiple superficial lymphadenectasis on her neck and a palpable mass of approximately 8 cm × 6 cm on the lower left side of her abdomen.

Pelvic ultrasound examination revealed multiple uterine fibroids, with the largest located at the bottom of the uterus (5.5 cm × 5.4 cm) and a solid mass at the lower left side of the abdomen (7.5 cm × 5.7 cm). Color Doppler echocardiography revealed mild aortic valve regurgitation. No abnormalities were observed in the cardiac morphology, structure and valve activity. 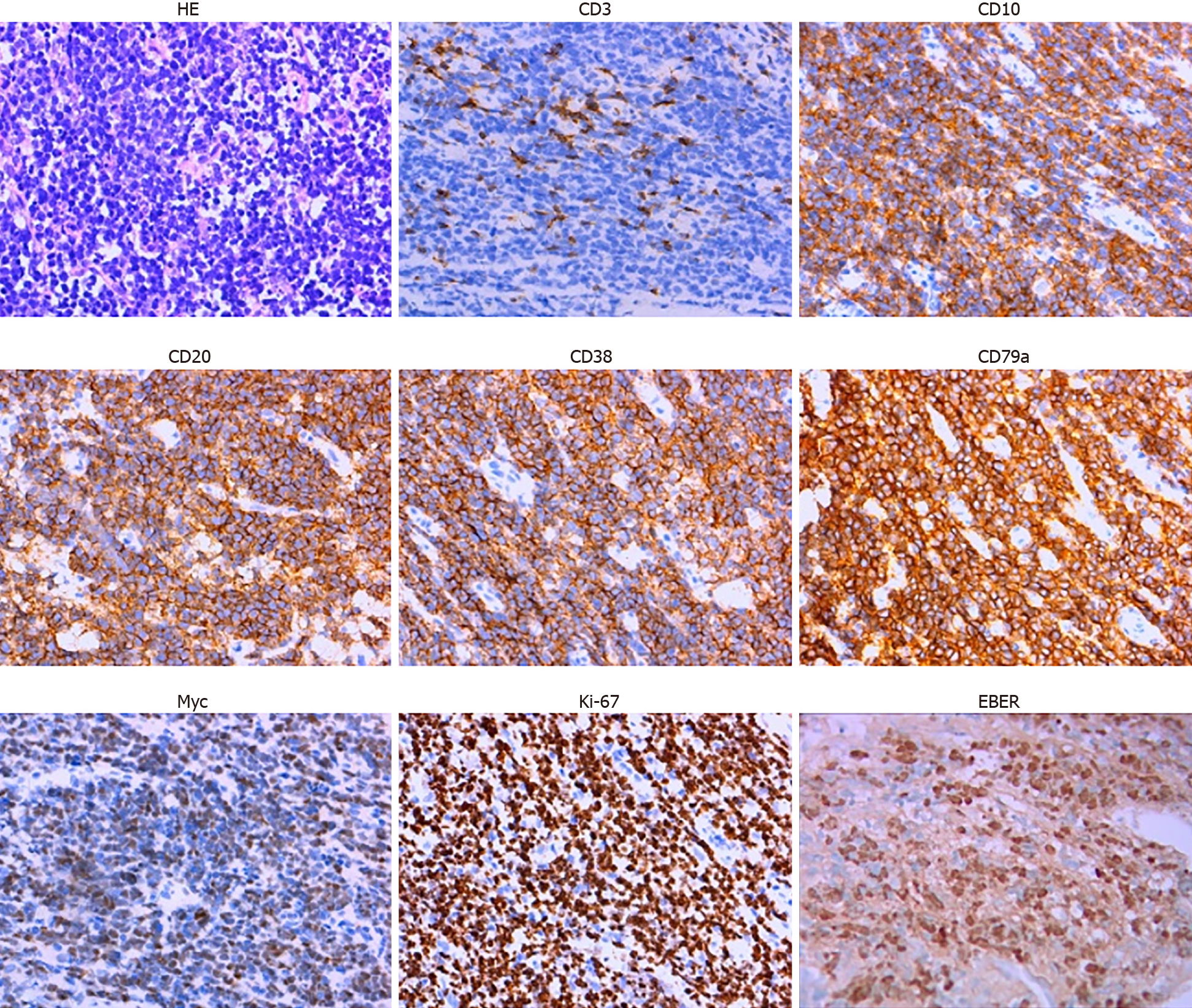 During the following 2.5 years, the patient was admitted to our hospital three times because of interstitial pneumonia, and antifungal treatment was performed. The follow-up PET/CT on April 18, 2019 showed increased fluorodeoxyglucose metabolism in the bilateral nasopharynx walls, bilateral submaxillary, bilateral neck, bilateral axilla and bilateral groin multiple lymphadenectasis, thickened intercostal pleura between the 11th and 12th right ribs and multiple nodules in peritoneal, retroperitoneal and pelvic cavities. Recurrence of lymphoma was suspected. However, the patient refused to be hospitalized for re-examination and treatment. 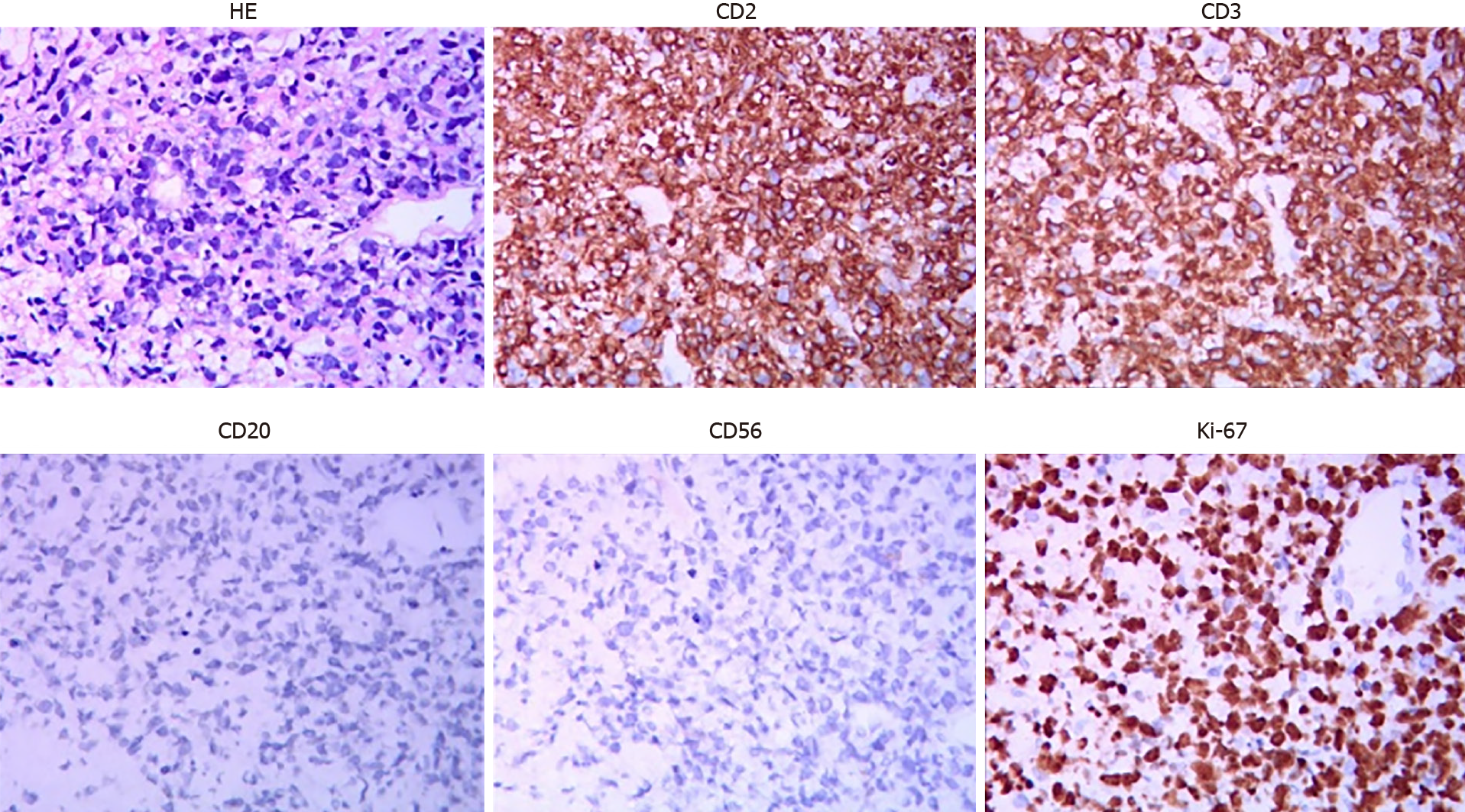 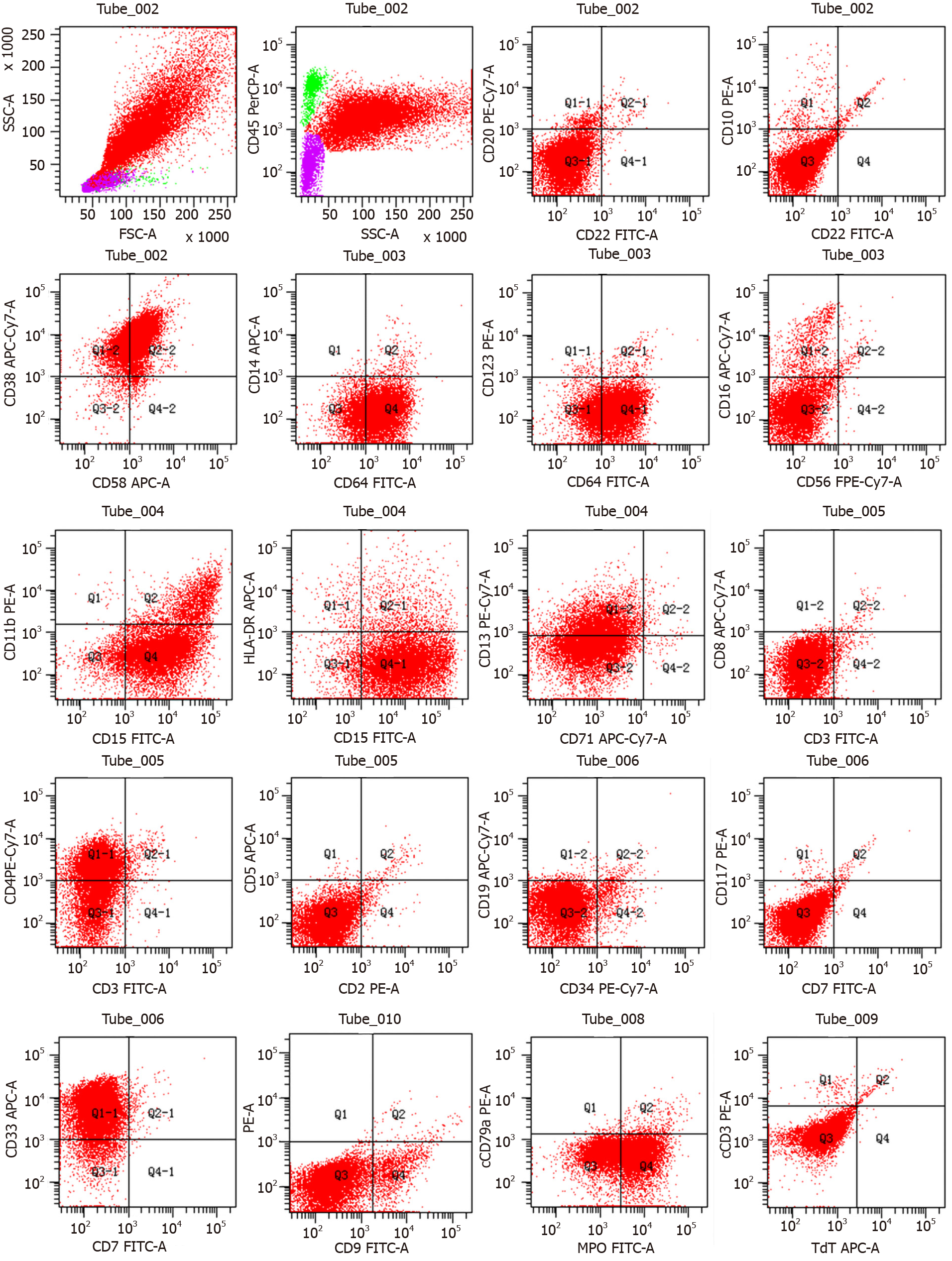 Considering her poor health condition, the patient was scheduled to receive decitabine (25 mg, days 1-5) and venetoclax (100 mg, once daily on days 1-7 and 200 mg on days 8-28) treatment supplemented with symptomatic and supportive treatments starting from October 2, 2020. However, she developed gastrointestinal bleeding, peptic ulcers and hemorrhagic shock on the second day of treatment, and the chemotherapy was suspended. Although many symptomatic and supportive treatments were given, the patient developed diarrhea in the afternoon of October 18, and her blood pressure dropped. She was critically ill, but her family members refused any further appropriate treatments, such as tracheal intubation. She was then discharged from the hospital.

The clinical course of the present case was summarized in Figure 4.

MPC was first recognized and reported by Owen[5] in 1921 and later by other researchers[6,7]. The frequency of MPC is reported to be in the range of 2%-17%[1], and the reported frequency in China is only 0.84% to 1.31%[8-10]. With the progress in early cancer diagnosis and treatment, patient survival time with malignant tumors has been prolonged, leading to an increased frequency of MPC. MPCs always occur as solid cancers. Although MPC associated with lymphoma and leukemia has been reported[11], the present case is the first report on secondary peripheral T-cell lymphoma and AML after the treatment of Burkitt lymphoma. Two years after treatment for Burkitt lymphoma, lymphadenectasis and gastrointestinal neoplasm occurred, which could have been easily misdiagnosed as metastatic or recurrent primary cancer. Currently, pathological biopsy is still the formal diagnosis method for tumors. Therefore, MPC diagnosis should be based on repeated multisite biopsies and should be conformed after multicenter consultation.

The mechanism for MPC remains unclear. Relevant factors may be roughly divided into endogenous factors (low immune function of patients with tumors), exogenous factors (such as environmental reasons and exposure to radiation and chemicals), genetic factors (such as family genetic defects and continuous action of carcinogenic factors) and factors related to appropriate therapy (such as the carcinogenic effects of radiation and chemotherapy)[1,12,13]. In this case, the patient developed PTCL-NOS together with AML approximately 2 years after being treated for Burkitt lymphoma. Although they were all hematological malignancies, the initial B-cell lymphoma and subsequent PTCL-NOS and AML had different sources of malignant cells. In this case, both heterochronous and synchronal MPCs occurred. The former is related to DNA strand breaks, gene mutations and chromosome aberrations caused by multiple chemotherapies, while the latter is scarce. The patient’s constitution may have contributed to this. Next-generation sequencing can help understand if tumors originate from different clones, thus guiding appropriate treatment. However, the patient refused further diagnosis and treatment due to economic reasons. Moreover, both Burkitt lymphoma and PTCL-NOS in the presented case had EBER, indicating common B/T progenitors may have EBV in this case. However, we could not perform Southern blotting analysis at our center to confirm this hypothesis.

The prognosis for MPC is poor, and there is still no consensus on the appropriate treatment. Currently, a patient-centered multidisciplinary comprehensive treatment model is recommended[14]. For patients with solid tumors, all lesions should be completely removed either simultaneously or successively. If a lesion cannot be excised, comprehensive therapies such as immunotherapy, targeted therapy and chemotherapy can be employed. However, the accumulation of drug toxicity or radiation doses in the same area should be monitored[15]. Burkitt lymphoma in this patient was in complete remission after the initial treatment until January 2018 when lymphadenectasis reoccurred, and PTCL-NOS complicated with AML newly occurred. For further diagnosis and treatment, chemotherapy is considered the primary choice. The patient was unable to withstand intense chemotherapy owing to her weak physical condition. Consequently, optimal supportive treatment was considered. However, she did not continue the treatment due to economic limitations.

In conclusion, we report a case of secondary PTCL-NOS complicated with AML and Burkitt lymphoma, with both heterochronous and synchronal MPCs. When a new tumor is diagnosed, its relationship to the old tumor treatment should be determined. If the economic condition allows, second-generation sequencing should be performed to identify the origin of tumors.