Currently, the advancement cancer treatment technology improves overall survival, however, adverse events are still a challenge for health professional. Genitourinary syndrome of menopause and vaginal stenosis are conditions that impact the quality of life of patients undergoing radiotherapy. We present two such cases in patients with previous cervical and endometrial cancer. These conditions were handled with an innovative method using an energy-based device with blue light emitting diode for concomitant vaginal and vulvar irradiation. Positive impact in clinical findings, cytologic changes, and referred symptoms were documented.

This innovative technique showed an improvement in all areas of the examiner's criteria, the cytological criteria, and most bothered symptoms.

Core Tip: Vaginal stenosis brings a negative impact on patients' quality of life, with permanent discomfort for cancer survivors. Energy based devices have emerged as non-hormonal treatments for vaginal disease. We present two cases of an innovative technique to treat this post radiotherapy complication.

Pelvic radiotherapy is one of the fundamental strategies for gynecologic cancer control. However, despite all the stated benefits and technical advances as preservation of normal structures with intensity-modulated radiation therapy, a large portion of patients present long-term adverse events such as vaginal stenosis and secondary genitourinary syndrome of menopause (GSM)[1,2].

The pathophysiology of radiotherapy’s secondary tissue damage is complex and is related to the process of disruption of tissue repair usually observed as disorderly deposition of the extracellular matrix, consequently fibrosis, and vascular disorders. Vaginal stenosis is a common complication that may occur in up to 50%-60% of women after 3 years of follow-up after a gynecologic cancer treated with radiotherapy[3].

Currently, a standardized method to prevent and treat long-term complications is not available. Hence, it is reasonable to keep searching for new effective non-drug and non-invasive therapeutic approaches. Recently, photobiomodulation therapy with lasers have demonstrated a definitive place in the treatment of vaginal diseases such GSM. However, it is a high-cost modality and still widely unavailable[4]. Photobiomodulation represents a potential emerging modality to change the management of tecidual disruptions, knowing that the blue LED has a repairing effect, feasible, and safe[5,6]. We proposed this innovative feature in the management of two cases of GSM after pelvic radiotherapy for gynecological cancer control. The objective of this study is to describe modifications in clinical features related to vaginal stenosis, sexual function, and quality of life. The case was conducted as part of a pilot study to calibrate a clinical trial, which was approved by the Ethics Committee with the No. CAAE70078717.4.00005544, registered in ClinicalTrial.com with the No. NCT03833726, and performed after obtaining signatures on a consent form.

Case 2: A 68-year-old woman with the chief complaint of dyspareunia with inability to maintain sexual intercourse.

Case 1: Patient demonstrated previous medical history of perineoplasty surgery in 1993 and vaginal delivery with forceps, and developed histologically proven squamous cell carcinoma of the cervix in 2003 (IIB, grade2-International Federation of Gynecology and Obstetrics, FIGO 2002). For this neoplasm she received concurrent chemo-and non-conformal radiotherapy to 4500 cGy in 28 fractions from 60Co beams, with parallel-opposed fields, followed by two fractions of high-dose rate brachytherapy of 600cGy. In the following year, the patient underwent radical hysterectomy surgery due to persistent disease, with a ureter lesion during the procedure requiring a double-J stent.

Case 2: Patient presented a past medical history of menopause 15 years previously and histologically proven endometrioid adenocarcinoma of the uterus grade 1, IB (FIGO, 2009) treated in 2016 with radical hysterectomy and salpingo-oophorectomy followed by adjuvant pelvic intensity-modulated radiotherapy of 45 Gy in 25 fractions. In 2018, the patient was referred for pelvic physiotherapy due to urinary incontinence with evidence of detrusor hyperactivity, despite appropriate adherence, evaluated by urodynamic study. After that, in 2019, the patient developed severe complaints of pruritus, vaginal dryness and dyspareunia which affected her sexual activity and quality of life, despite the use of lubricants and polyethylene glycol moisturizers.

Case 1: Only 10 years later, patient underwent ureter reimplantation, when mixed urinary incontinence was treated with pelvic physiotherapy and drug treatment composed of estradiol and testosterone vaginal gel and anticholinergics. The patient did not show good response to the treatment and abandoned the follow up. In 2017, the patient presented with severe complaints of vaginal dryness, pelvic pain, and pruritus and revealed the inability to have sexual intercourse since cancer diagnosis.

Case 2: There are no history of past illness in the case 2.

Case 1: There was no relevant family history of comorbidities.

Case 2: There was no relevant family history of cancer or other comorbidities. 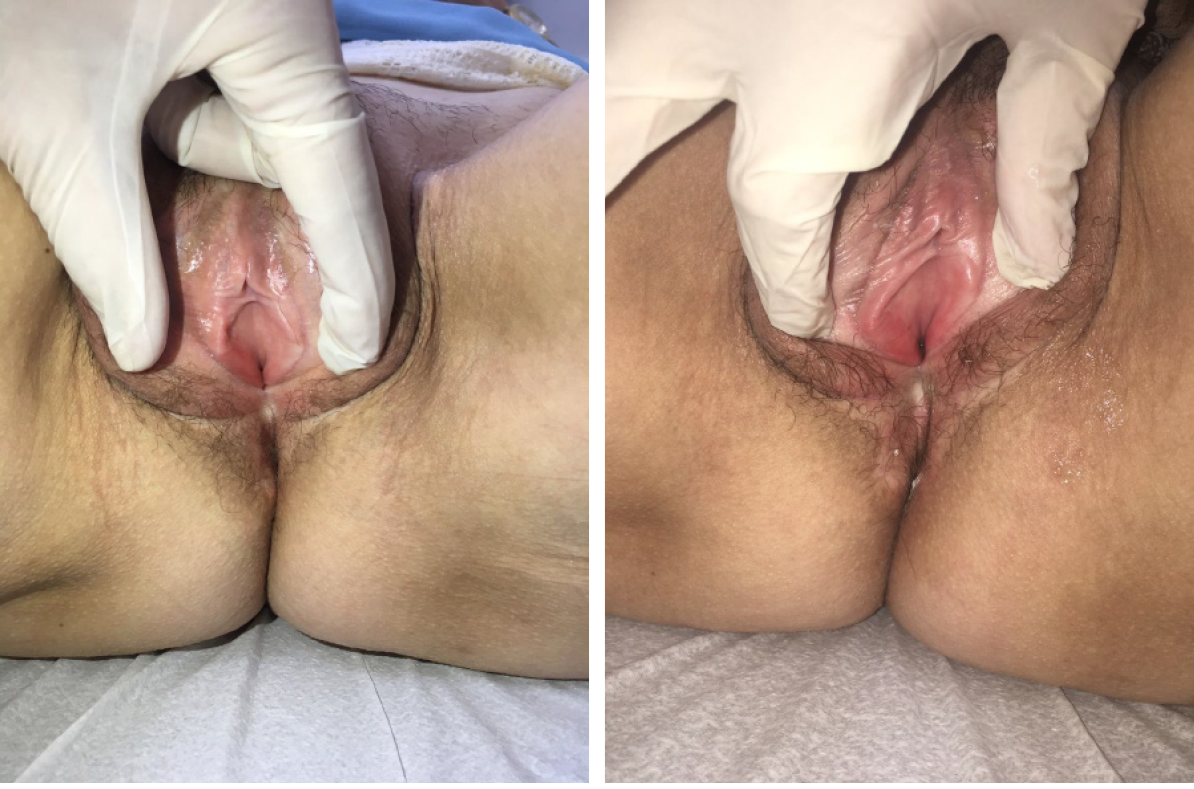 Figure 1 Pelvic inspection before and after 5 sessions of treatment (case 1).

Case 2: During gynecological examination it was possible to observe an atrophic aspect of the vulva, pale vaginal mucous and a mild vaginal dryness and mild vaginal stenosis, unable to use a vaginal speculum, but possible two-finger touch.

Case 2: No additional laboratory evaluation was necessary and the patient presented normal tumor markers among the oncological follow-up exams.

Case 2: No additional imaging evaluation was necessary for the current diagnosis or decision regarding treatment, however, the patient had pelvic magnetic resonance imaging, in less than 3 mo without evidence of collections or recurrence of the neoplasm.

The patient was treated with 10 sessions of intravaginal and extravaginal blue LED; each session was of 8 min and a wavelength of 405 ± 5 nm, 30 W of power, and 0.000773 W/cm3 of irradiance with a blue LED, Energy model, DGM was used. The device was positioned in the dorsal recumbent position (Figure 2).

A smaller number of sessions has been proposed due to the lower severity of the condition compared to the first case and then, the patient was similarly treated with 5 sessions of intravaginal and extravaginal blue LED for 8 min each.

The assessment of response to treatment was carried out through physical examination, vaginal maturation cell index[7,8], vaginal index of health[9], visual analogue scale[10], Female Sexual Function Index (FSFI)[11], and Likert scale of satisfaction, with documented improvement as seen in Table 1.

Reassessments and clinical follow-up were performed weekly during treatment with the physical examination and through standardized questionnaires, 1 wk after completion and after 1 mo.

Treatment outcomes were evaluated with the same resources as the previous patient, (physical examination, vaginal maturation cell index, vaginal index of health, visual analogue scale, FSFI, and Likert scale of satisfaction), and the results are presented in Table 1.

Revaluation was performed at the same time frame, after one month with reduction of dyspareunia and return of sexual intercourse.

The anatomical and functional long-term sequelae of radiotherapy can be noticed by vascularity and lubrication reduction, loss of tissue elasticity, attenuation of the density of the vaginal wall, atrophy of the internal and external genitalia, and retraction of the vaginal introitus. Multiple mechanisms are involved in the emergence of this condition, such as fibrous effect and estrogen deprivation when the ovaries are in the field of radiotherapy, when concomitant chemotherapy is performed and affects gonadal functionality, or when oophorectomy is performed[1,2].

These changes have a negative impact on patients' quality of life, with permanent discomfort for cancer survivors, and are also most commonly associated with sexual dysfunction, dyspareunia, and post-coital bleeding[3,12]. Local measures such as the use of lubricants and moisturizers bring temporary and insignificant relief, with immediate benefit regression[4,12,13].

Extracavitary and intracavitary lasers, which emit light in a convergent and punctual manner, are currently available in some centers; however, protocols are yet to be established regarding the ideal duration of each session, number of sessions, and intervals between sessions[12,13].

Several studies have been conducted to investigate the cellular and molecular events that explain the effects of light and its various wavelength spectra on organic systems; although they have not been fully elucidated, it is postulated that these effects originate from absorption by endogenous chromophores, leading to an increase in the synthesis of adenosine triphosphates, cyclic adenosine monophosphates, nitric oxide, and calcium ion[14].

Additionally, there is also a growing interest in opsins (OPN), which are potential photoceptors for absorption in the visible violet-blue range (420 nm to 440 nm) present in the epidermis and human facial and abdominal dermis in situ and also expressed in newly regenerated tissue after the wound; moreover, they appear to be largely responsible for triggering cell signaling and the potential regenerative effect. Similarly, the decrease in OPNs leads to a reduction in the early differentiation of keratinocytes after irradiation with blue light, suggesting that OPNs are necessary for the restoration of epithelial tissue barrier function.

In addition, OPNs influence the intracellular redox state by modulating the tissue repair process, assisting in the modulation of fibroblasts and production of collagen, which suggests its potential in the prevention and treatment of tissue fibrosis[14,15].

The 405 nm blue LED has already been studied in tissues with histological similarity to the genital region, such as in gastric and oral mucosa, with circulatory and regenerative benefits demonstrated by several authors, including pain improvement and inflammatory process resolution[16,17]. Oh et al[5] demonstrated blue LED at a wavelength of 450 nm and power of 6.3 mW/cm2 for 30 min inhibited the migration and invasion of cancer cells with anti-metastatic and anti-proliferative effects on spontaneous lung metastases in mice.

Pavie et al[6] demonstrated the safety of LED on normal vaginal mucosa, demonstrating safety and good tolerance with no adverse events. This opened up perspectives for the use of blue LED for other disorders.

A recent study conducted by García et al[18] used LED in three colors and wavelengths alternately (blue-415 nm, red-660 nm, and infrared-850 nm) to treat 30 pre- and post-menopausal women with symptoms of vaginal dryness related to vaginal atrophy. After 12 sessions (divided into two applications per week, of three min each), they observed increases in the vaginal health index, FSFI questionnaire, vascularity, tissue thickness, and urethra-vaginal distance, which reflected a reduction in tissue laxity.

The patients in the present cases treated with this innovative technique showed an improvement in all areas of the examiner's criteria as genital pale or erythema, vaginal dryness and fragility, the cytological criteria, and those referred by the patients. The patients did not report any discomfort during the application, and they did not have any short-term adverse effects. Since the nature of the biological effects of blue light photobiomodulation (PBM) on cells still lacks comprehensive research, the underlying signaling and differences between blue light PBM and others wavelengths remain elusive. Understanding the function and relationship of different photoreceptors and their response to specific light parameters will lead to the development of reliable, light-based therapies for the healing of skin wounds.

In conclusion, intravaginal blue LED treatment demonstrated a promising tolerance and potential to become the treatment option for long-term sequelae in cancer survivors with apparent low toxicity. Clinical trials are required to evaluate late safety and efficacy in patients with restricted therapeutic arsenal.