Colposcopy currently plays a vital role in the diagnosis and treatment of lower genital diseases. Exposure and biopsy are two key steps in colposcopy. When the whole transformation zone or all lesions cannot be observed, we judge colposcopy as unsatisfactory. Unsatisfactory colposcopic examination may lead to the misdiagnosis of more severe diseases. The combination of colposcopy and vaginoscopy may contribute to accurate diagnosis and clinical decisions.

The patient received a precise diagnosis and early surgery due to the combination of colposcopy and vaginoscopy.

Core Tip: Combined with cervical screening, colposcopy greatly decrease the incidence of cervical cancer. Exposure and biopsy are two key steps in colposcopy. When the whole transformation zone or the entire lesions are not observed, we judge it as unsatisfactory. For type 3 transformation zone, some clinicians employ cervicoscopy as supplement. However, there were no related solutions for the dilemma caused by adhesion or obstruction. Here, we report a case of post hysterectomy deep vaginal apex not fully exposed in colposcopy, and the biopsy result was vaginal precancerous lesion. We adopted vaginoscopy to extend and expose the lesion thoroughly and the biopsy result was vaginal squamous cancer.

Combined with cervical screening, colposcopy greatly decreases the incidence of cervical cancer[1]. Exposure and biopsy are two key steps in colposcopy. For patients with a type 3 transformation zone (TZ), some clinicians employ cervicoscopy as a supplemental imaging technique[2]. However, there were no related solutions for the dilemma caused by adhesions or obstructions. Here, we introduce a case in which precise diagnosis was achieved after using two detection methods.

A 61-year-old woman with cytologically determined high-grade squamous epithelial lesion (HSIL) visited the outpatient clinic of the Obstetrics and Gynecology Hospital of Fudan University on June 22, 2018.

In May 2018, the patient’s cytological examination still indicated HSIL. She came to our hospital for further treatment.

The patient underwent hysterectomy for a cervical HSIL in 2013 at a local hospital. She did not visit the hospital after surgery. In May 2017, she had slight vaginal bleeding and was cytologically diagnosed with HSIL. A vaginal low-grade squamous epithelial lesion (LSIL) was confirmed by colposcopy-directed biopsy. She was followed for one year.

A doctor at the clinic performed the gynecological examination and simultaneously took HPV samples. On June 29, 2018, the patient was referred to the colposcopic center in our hospital with a positive HPV 16 result. A colposcopy sample was taken and indicated HSIL. However, the left vaginal apex was too deep to be fully exposed.

Therefore, we performed curettage. The biopsy results suggested LSIL in the vaginal wall and HSIL with papillary growth in the curettage of the vaginal apex (Figure 1A). We telephoned the patient, but she did not visit until July 25, 2018. At this time, ultrasonography was performed, showing a mixed structure with a low-echo area at the top of the vagina of approximately 17 mm × 14 mm × 7 mm. One attending doctor performed another gynecological examination. She had two deep vaginal apexes (Figure 2A and 2B). Bimanual examination suggested a thickened area at the top of the vagina. To further evaluate the vaginal apex, vaginoscopy was performed on July 26, 2018. After the lens (OD 6.5 mm) entered the vagina, 3% acetic acid solution and Lugol's iodine solution were successively used as extension media. The left apex (Figure 2B) was nearly 20 mm deep, forming a cavity beyond the vaginal top. The cavity was occupied by multiple papillary lesions of approximately 15 mm × 10 mm (Figure 2C and D). Dense acetowhite lesions were observed, with atypical vessels, fragile vessels, and iodine-negative epithelium. Biopsy forceps were placed through the operating hole, and the tissue was biopsied under direct view. 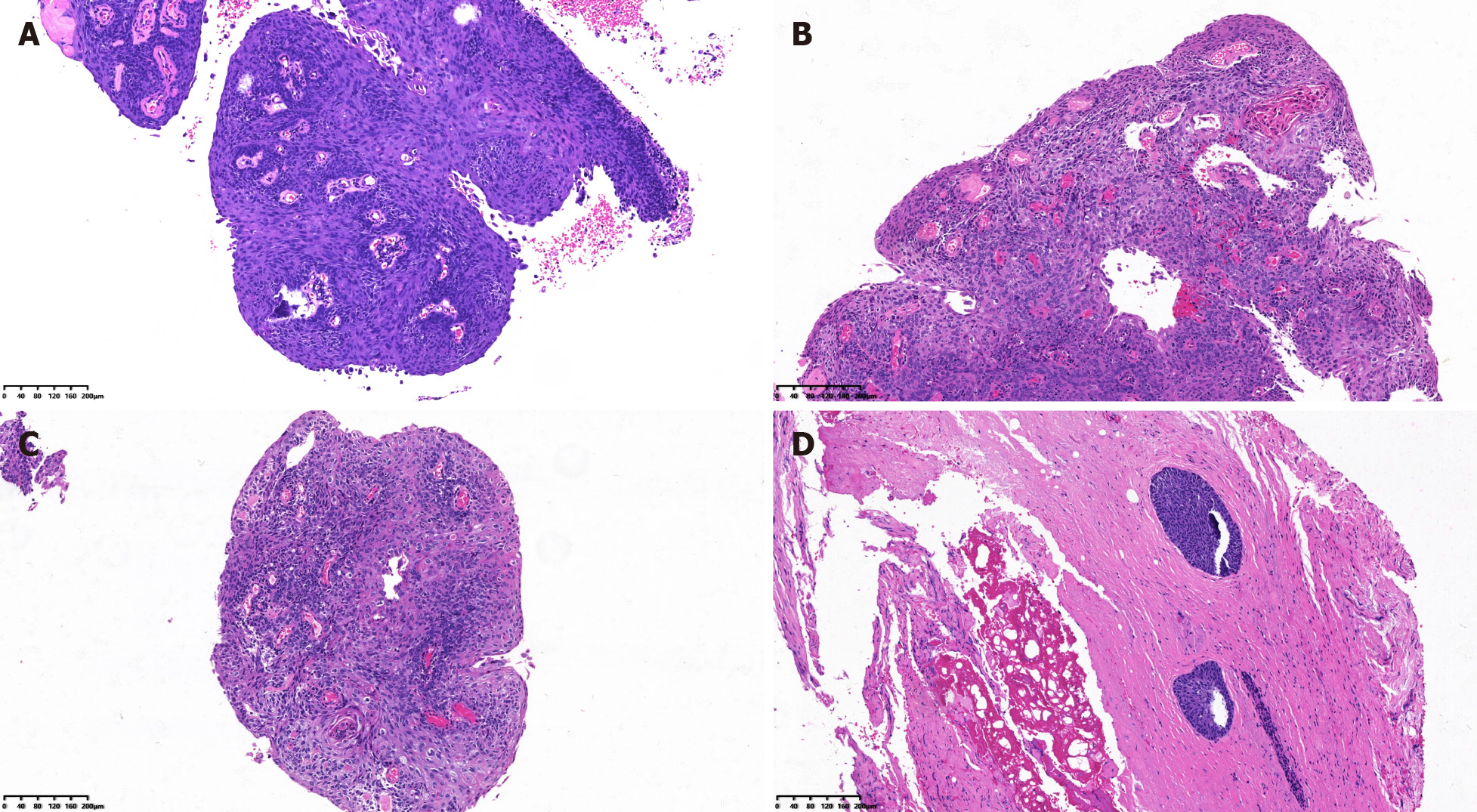 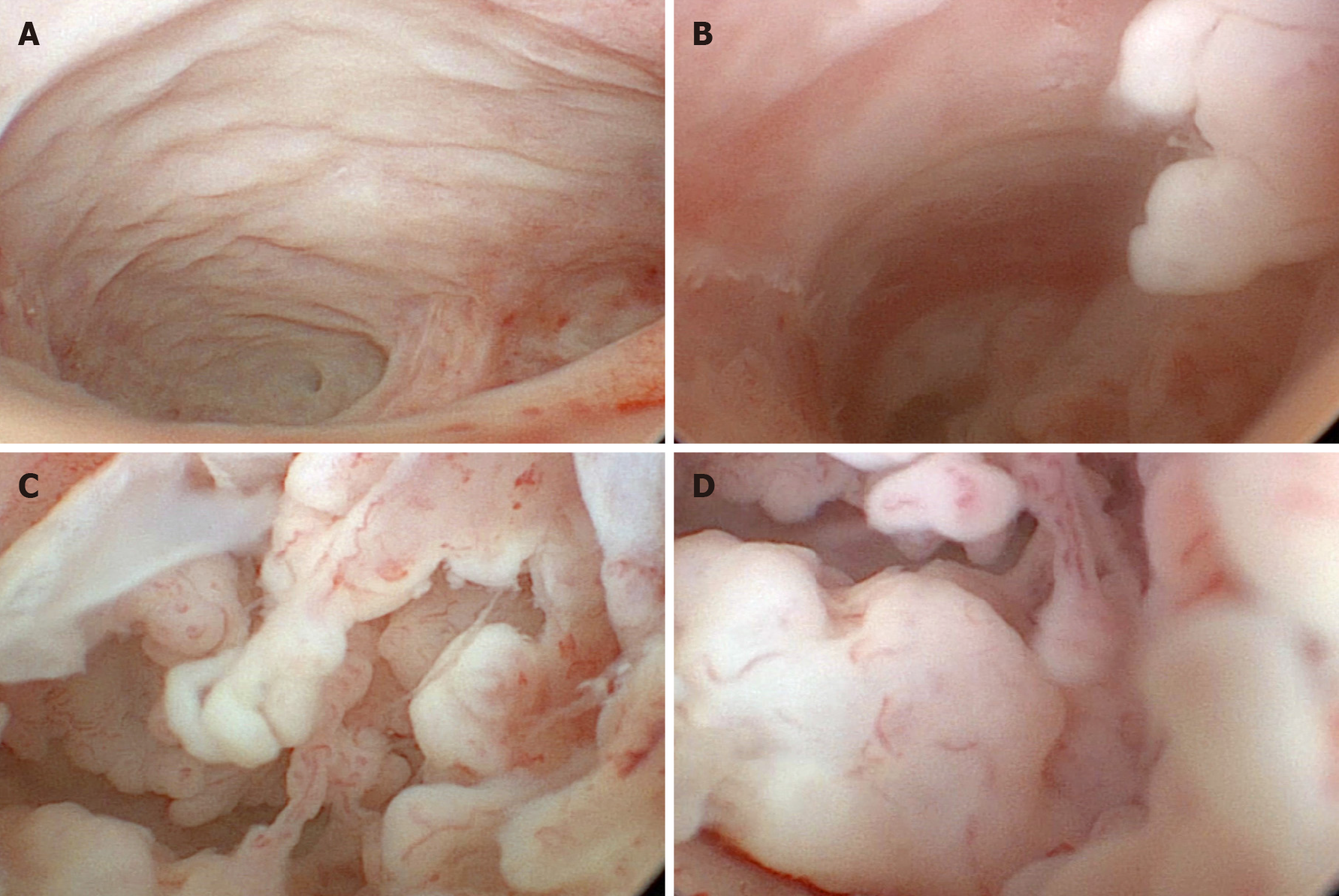 The neoplasm was histologically confirmed to be an exogenous papillary squamous cell carcinoma (Figure 1B and C).

Because the biopsy tissue was superficial, with no tumor pedicle, whether there was infiltration was uncertain. The patient underwent extensive paravaginal and partial vaginal resection on August 7, 2018. The paravaginal and vaginal walls showed HSIL with negative margins (Figure 1D), and abnormal lymph nodes were not found.

The patient was followed for 20 mo and obtained negative cytology and HPV results in October 2018 and October 2019. The colposcopy results were normal in March 2020.

The popularization of colposcopy technology has brought great progress to the diagnosis and treatment of lower genital tract diseases. For women who have abnormal cytological results, colposcopy-directed biopsy is considered the gold standard for determining the treatment modality[3].

Exposure and biopsy are the two key steps in colposcopy. What can we do when unsatisfactory colposcopy occurs because of, for example, incomplete exposure of the TZ, unexposed lesions due to adhesions or obstructions, or, as in our patient, deep vaginal apexes due to the suturing of the two ends to the cardinal ligament stump in hysterectomy, preventing observation?

Curettage might be a good method, but the sensitivity of traditional curettage ranges from 37.5% to 75%[4], and there does not appear to be a general consensus on curettage[5].

Some clinicians observe the cervical canal through cervicoscopy. After a pilot study, Rahimi et al[6] concluded that cervicoscopy is a reliable method to detect the TZ in patients with a type 3 TZ. De Franciscis et al[7] found high diagnostic effectiveness in cervicoscopy, which allowed conservative surgery to be performed. The cervicoscopic lens used is actually the lens of the hysteroscope. They observed the cervix without dilatation fluid or observed the uterine cavity with 0.9% normal saline dilatation.

In recent years, vaginoscopy has been widely used in adolescents or postmenopausal women without a speculum or cervical forceps. After a randomized controlled trial, Smith et al[8] found vaginoscopy to be quicker to perform, less painful to patients, and more successful than standard hysteroscopy. Vaginoscopy, a “no-touch” approach, can be used not only to perform endometrial biopsy and remove foreign bodies in the vagina but also to meet the hopes of patients and their families of not damaging the hymen and reducing pain[9].

We for the first time report a case in which vaginoscopy was combined with colposcopy to discover lesions hidden behind the vaginal chamber. Because the exposure with colposcopy was insufficient, routine curettage could not obtain accurate material for analysis. Vaginoscopy was performed to further evaluate the vaginal apex. During the process, the vulva was covered with gauze to prevent the outflow of distended fluid.

By expanding the cavity and exposing the vaginal apex, we can use vaginoscopy to evaluate vaginal lesions; by using acetic acid and Lugol's iodine solution, we can assess anomalies and distinguish the severity of the lesion. After direct observation and biopsy, we can avoid misdiagnosis owing to traditional curettage.

In our hospital, we initially examined 16 patients with unsatisfactory colposcopy and auxiliary vaginoscopy. Biopsy samples were taken in both operations, and only nine (56.25%) had the same histology, two (12.5%) had serious histology, and five (31.25%) had mild histology via vaginoscopy compared with histology via colposcopy.

Our case suggested that vaginoscopy is essential for patients with unsatisfactory colposcopy. A study with larger sample size is urgently needed.

The authors would like to thank the patient for her kind cooperation during the treatment and follow-up. We also thank Ting Li from the pathology department of our hospital for providing pathological pictures.