In daily life and work, there are more and more patients with trauma to the hand, which often results in skin and soft tissue defects. Although there are many repair methods, the function and appearance of the fingers will be adversely affected if the repair is inadequate.

In the present report we describe an 18-year-old male patient whose right hand was mangled by a machine. X-ray imaging showed that a right hand bone (middle finger) was absent and the alignment was poor. After hospitalization, he was diagnosed with a severe right hand injury, skin and soft tissue defects, partial finger defects, and a skin degloving injury. He underwent reconstructive surgery with anterolateral thigh and ilioinguinal flaps. After two repair operations, satisfactory results were obtained, including good fracture healing, good skin flap shape, and good wrist joint function.

Hand and foot soft tissue defects are common skin injuries[1]. In recent years with the rapid development of transportation, industry, and construction, the number of migrant workers is on the rise, and there is an increase in high-energy injuries causing palm damage[2]. A large skin defect in the hand, especially a degloving injury of the entire hand at the distal end of the wrist, is usually accompanied by the exposure of tendons, bones and joints, and avulsion or injury of finger blood vessels and nerves with a large area of damage[3]. Improper treatment will seriously affect the appearance and function of the injured hand and wrist, which has always been a challenge for plastic surgeons. Scholars at home and abroad have used many methods to repair large skin defects of the hand. It has also been reported that the combination of chest, abdomen, and thigh flaps to repair large skin and soft tissue defects of the hand has a good effect[4]. In this paper we report a case involving a severe injury of the palm recently managed in our department. We used anterolateral thigh and ilioinguinal flaps to repair a large skin defect.

An 18-year-old male sought evaluation in our hospital emergency department with an 8-h history of pain and bleeding after his right hand was mangled by a machine.

The patient’s symptoms started 8 h ago with pain and bleeding.

The patient had a free personal and family history.

The physical examination findings are shown in Figure 1. Specifically, the physical examination revealed that the patient’s right hand was injured and severely deformed. The open wound was formed beyond the horizontal stripes of the wrist. There was defective skin on the palm and dorsal aspect of the right hand. The skin of the wrist was transversely avulsed (approximately 8 cm in width), and only the radial skin was connected. The wound was “dirty” with active bleeding and bone exposure. His right five fingers were active and passive. The right wrist had an active activity disorder, and passive activity was acceptable. There were no obvious abnormalities in the active and passive activities of the right elbow and shoulder.

The patient did not undergo laboratory examinations.

X-ray imaging showed that a right hand bone (middle finger) was absent, and the alignment was poor (Figure 2). 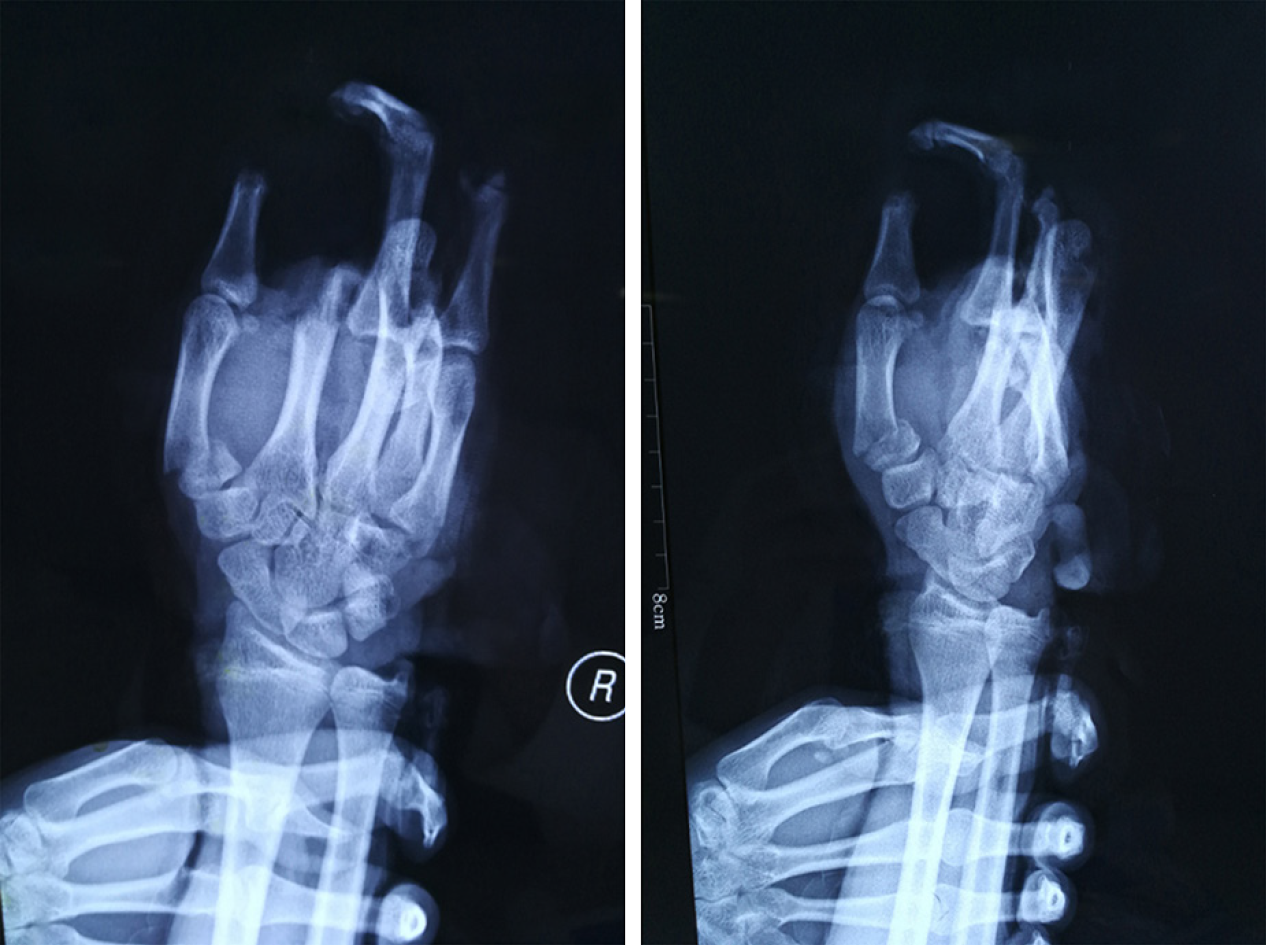 After hospitalization, he was diagnosed with a severe right hand injury, skin and soft tissue defects, partial finger defects, and a skin degloving injury.

On the ninth postoperative day, a large amount of fresh granulation tissue was noted during a dressing change, and the boundary between granulation tissue and necrotic tissue was clearly demarcated. After explaining the extent of injury to the patient and his family members, the attending physician planned to perform right hand debridement, metastasis of a free anterolateral thigh flap, metastasis and repair of a right ilioinguinal flap, and skin grafting under general anesthesia. The tourniquet was ligated on the right upper arm. The skin defects of the palmar and dorsal aspects of the right hand, the skin necrosis involving the wrist, and the residue of the phalanges of the thumb and the ring finger were noted. In addition, only a metacarpal bone remained and the phalanx of the distal part of the ring finger and the thumb (a length of approximately 0.5 cm) were black in color. Thorough debridement and cleaning were performed to remove necrotic bone. After the tourniquet was released, the area of the palmar skin defect was shown to be approximately 15 cm × 20 cm, and the area of the dorsal skin defect was approximately 15 cm × 20 cm. Using the line of the left iliac patella line as the axis, the anterolateral thigh flap was excised with an area of approximately 15 cm × 25 cm. After identifying the descending branch of the lateral circumflex femoral artery and the musculocutaneous perforating branch, the flap was covered and sutured to the radial aspect of the hand to cover the stump of the thumb, and the vascular pedicle was anastomosed with the radial artery and cephalic vein. The blood supply of the flap was satisfactory. The right thigh thin-layer flap was removed and transplanted to the left thigh flap. The skin graft was covered with VSD and a pressure dressing was applied to the right thigh. With the right ilioinguinal as the axis and 2 cm below the pulsation point of the femoral artery as the rotating point, a 25 cm × 10 cm flap was excised and sutured to the finger side and the anterolateral thigh flap to completely cover the skin defect of the hand (Figure 3). During the operation, 1.5 units of red blood cells and 320 mL of plasma were transfused. On the 19th day postoperatively, the patient underwent a pediculotomy of the ilioinguinal flap. 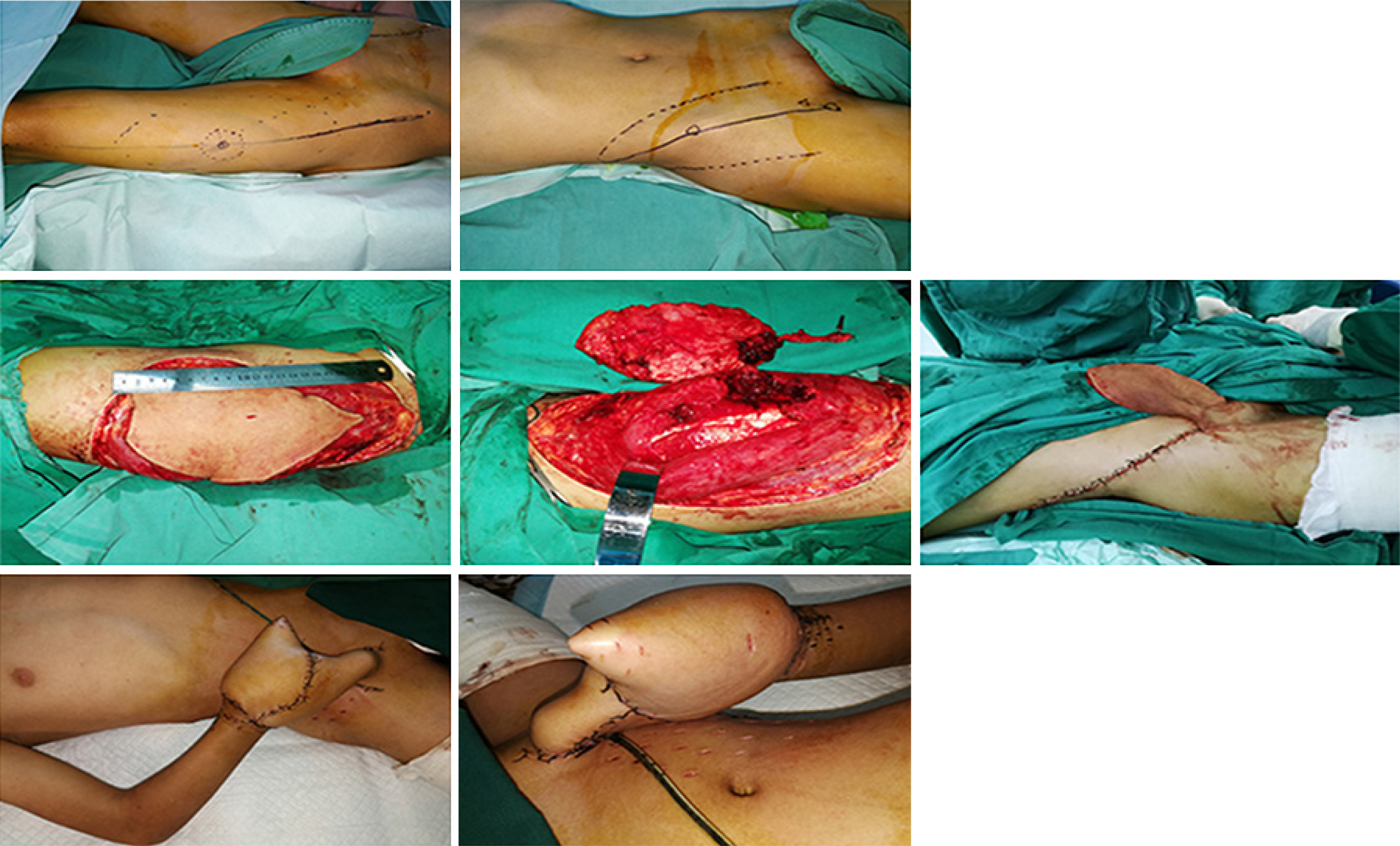 Five months later, in an effort to improve the cosmetic appearance of the flap and separate the five fingers of the right hand, the patient returned to our hospital for treatment. The skin flap was slightly swollen with good skin temperature and color, and the wrist could be bent and extended during a general physical examination. Therefore, the physician in charge performed a repair procedure. Under general anesthesia, the physician noted that the right hand skin flap was slightly bloated, and the phalanx of the ring finger was wrapped in the skin flap. A 7-cm arc-shaped volar and dorsal incision was excised between the two fingers and a ring finger Kirschner’s needle was used to bluntly separate the phalanges. Part of the subcutaneous fat was removed and the flap was wrapped around the two fingers to form a finger web. The skin was incised subcutaneously along the scar of the original operation at the ulnar side of the thumb and the mouth of the tiger, and part of the fat tissue, the two Kirschner wires, and part of the skin were removed to deepen the tiger mouth. Two fingers were successfully separated after reconstructive surgery.

Four months later, the patient returned to our hospital for further repair. Under general anesthesia a tourniquet was placed on the right upper arm, the remaining ring fingers were cut longitudinally, a triangular flap was cut horizontally at the metacarpophalangeal joint of the palm, and the flap was rotated counterclockwise 60° to cover the ring fingers. A horizontal incision was made under the fourth metacarpal bone to remove the remaining third metacarpal bone. The skin and soft tissue of the ring finger and the fourth metacarpal bone were transferred to the third metacarpal bone. One Kirschner wire was fixed longitudinally. The skin tension was good after removing part of the soft tissue under the ring finger. Two triangular flaps were formed by cutting a Z-shaped incision on the flap of the palmar tiger mouth. The remaining second metacarpal bone was removed and transplanted to the stump of the thumb and fixed with two Kirschner wires. The remaining thumb skin directly covered the bone graft. The triangular flap was rotated counterclockwise and clockwise 60°, the tiger mouth was deepened, and part of the subcutaneous fat tissue was removed.

Three months later, the patient came to the clinic for a re-examination and satisfactory results were confirmed, such as good fracture healing, good skin flap shape, and good wrist joint function (Figures 4 and 5). 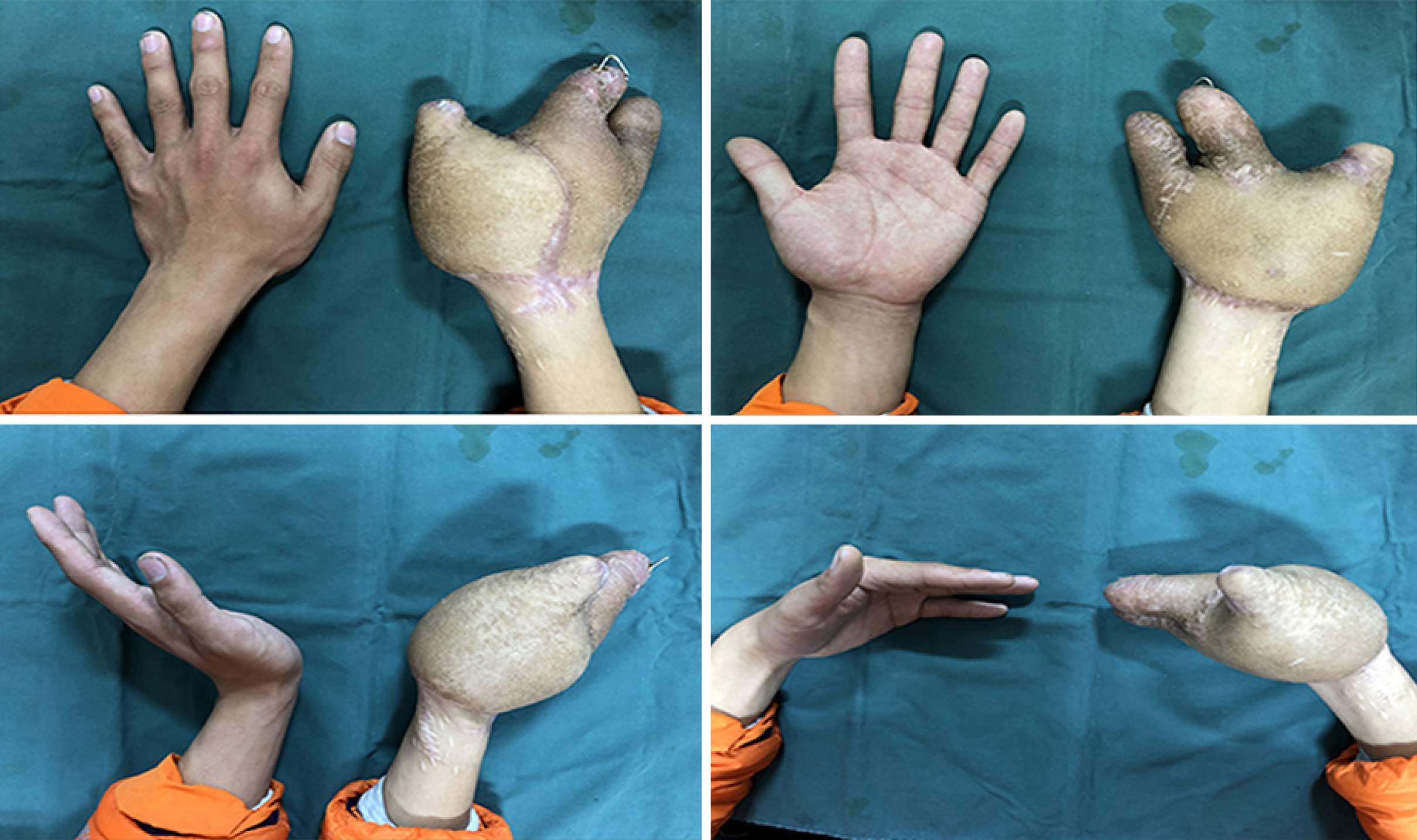 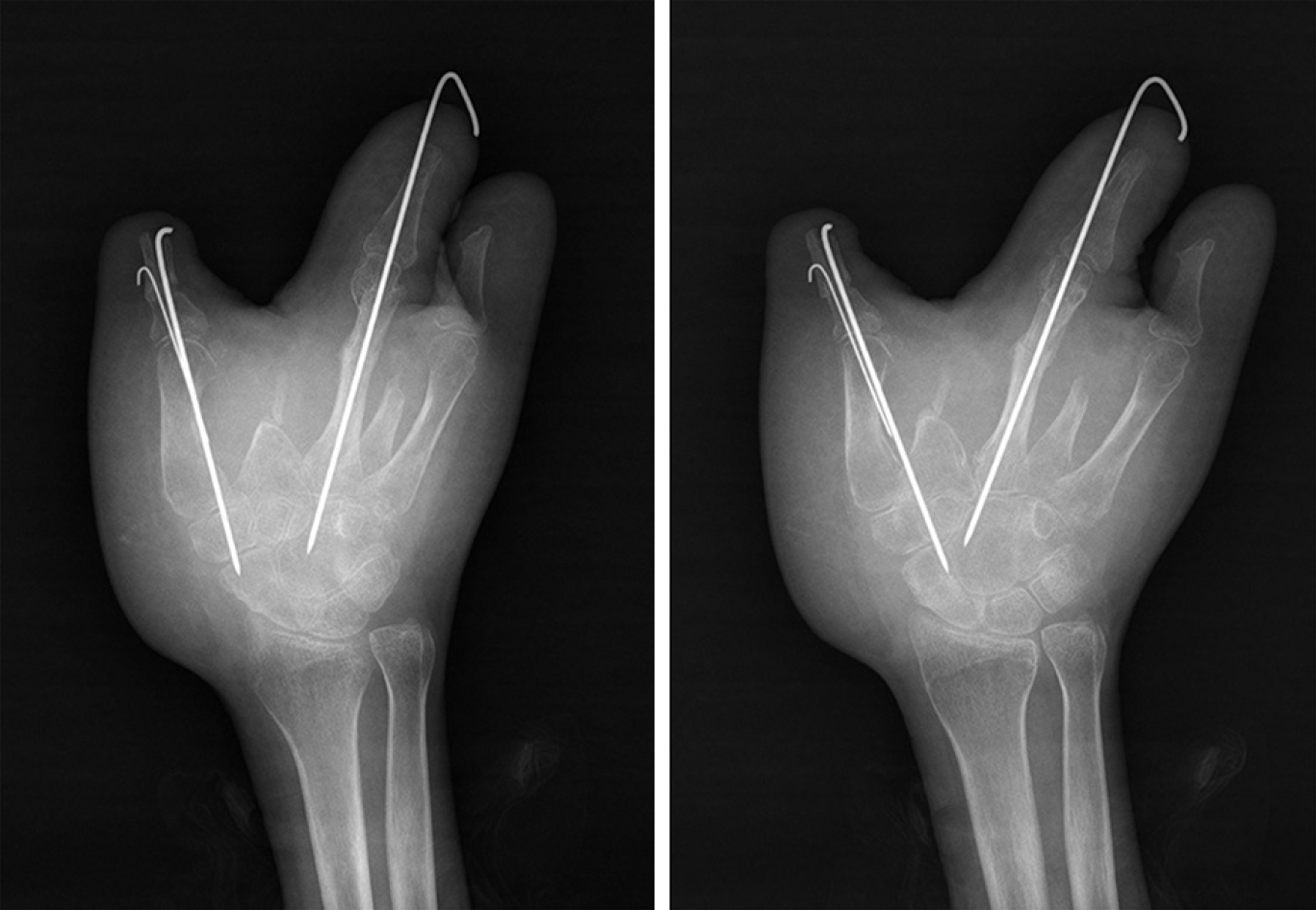 With the increased number of migrant workers in recent years, more and more injuries involving the palms are caused by various high-energy injuries. This type of injury is very difficult to treat with an acceptable return of function and cosmetic appearance. It is easy to curtail a limb blood supply and even perform an amputation, which cause a heavy economic burden to society and the family[5]. Repairing and recovering function with an acceptable appearance to the maximum extent is an issue for hand surgeons[6].

With the development of microsurgery, an anterolateral thigh flap, known as the “omnipotent flap,” has been used more frequently in the clinical repair of this type of trauma. The main blood supply of the anterolateral femoral flap is the descending branch of the lateral circumflex femoral artery. The advantages of an anterolateral thigh flap include a concealed donor area, a large flap area, a constant vascular pedicle, minimal anatomic variation, a long vascular pedicle, a thick diameter, no influence on limb function after flap cutting, and the ability to excise the flap in a supine position[7-9] To reduce the bloated appearance after transplantation, a thinned anterolateral thigh flap can be used to repair the wound for young patients who have concerns about the appearance[10]. An ilioinguinal flap is supplied by the superficial circumflex iliac and superficial abdominal arteries. An ilioinguinal flap has the advantages of concealment of the donor area, a large cutting area, suture by bending the hip and knee, and no need for additional skin grafting[11,12].

In the current case, anterolateral thigh and ilioinguinal flaps were used to repair the defect wounds, which made full use of the advantages of the two flaps and satisfaction from the patient. We believe that this kind of injury should be completely debrided, then fix the fracture to repair the bone scaffold and cover the soft tissues with good blood circulation in the early stage. When the necrotic and infected tissues are removed, “dirty” wounds can be covered with vacuum sealing drainage dressing after wound expansion until the wound infection is controlled and there is no secondary necrotic tissue. When the boundary of the necrotic tissue is clear, the second stage flap repair is performed. According to the size, shape, and area of the wound defect and the aesthetic needs of the patient for the donor and recipient areas, a personalized flap can be selected. In addition, the key to the success of the operation is to be well-prepared with an operative plan before the operation, fully predict possible complications during the operation, carry out a meticulous repair during the operation, and manage the patient carefully after the operation. Furthermore, care should be taken in flap reconstruction and fingering. Generally, it should be done 4-6 mo after the operation to prevent skin flap necrosis.