Ischemic colitis with inferior mesenteric arteriovenous malformation (AVM) is a rare disease. Although a few reports have been published, no report has described the natural history of idiopathic mesenteric AVM.

A 50-year-old male was admitted to our hospital due to abdominal pain that had persisted for 3 mo and bloody diarrhea. He had no history of trauma or abdominal surgery. He had undergone two colonoscopies 6 mo and 2 years ago, and they showed only a polyp. He was diagnosed with ischemic colitis with inferior mesenteric AVM following contrast-enhanced abdominal computed tomography (CT) and underwent rectal low anterior resection. He has not had a recurrence of symptoms for 3 years. His history showed that he had undergone non-enhanced abdominal CT 2, 5, and 8 years ago when he had attacks of urinary stones. Retrospectively, dilation of blood vessels around the rectosigmoid colon could have been detected 5 years ago, and these findings gradually became more evident.

This is the first report of the natural history of inferior mesenteric AVM.

Rectum blood flow is supplied from several arteries, including the superior rectal artery (branch of the inferior mesenteric artery), middle rectal artery (branch of the internal iliac artery), and inferior rectal artery (branch of the internal pudendal artery); hence, ischemia of the rectum is very rare[1]. Arteriovenous malformation (AVM) causes gastrointestinal bleeding[2] and may also cause ischemic colitis. A few reports of ischemic colitis caused by inferior mesenteric AVM have been published[4-14]. However, no report has described the natural history of idiopathic AVM. Here we describe a case of ischemic colitis caused by idiopathic inferior mesenteric AVM. We were able to retrospectively observe the dilation of blood vessels around the rectosigmoid colon.

He had tenesmus 3 mo before his first admission. One month before presentation, he had bloody diarrhea and lower abdominal pain, which was alleviated by defecation. Five days before admission, these symptoms became worse, and he visited our hospital.

The patient had hypertension, lipidosis, sleep apnea syndrome, and urinary stones. He had no history of trauma or abdominal surgery. He had undergone a colonoscopy 2 years ago because of fecal occult blood, and a colon polyp was detected. No abnormalities were detected in a second colonoscopy performed 6 mo ago. Because of attacks of urinary stones, he had previously undergone non-enhanced abdominal computed tomography (CT).

His father had cholangiocarcinoma, and his mother had hypertension.

He was afebrile with normal vital signs. Physical examination showed abdominal tenderness in the lower abdominal quadrants without signs of peritoneal irritation. No mass was detected in the abdomen.

His laboratory data were unremarkable except for mild anemia (hemoglobin level, 12.9 g/dL).

Non-enhanced abdominal CT showed hypodense thickening of the sigmoid and rectal wall. Colonoscopy revealed diffuse ulcerations, edema, and erythema from the descending colon to the rectum. These mucosal findings were most evident in the upper rectum (Figure 1). Biopsy specimens from the colon showed atrophy of crypts and infiltration of inflammatory cells, which were consistent with ischemic colitis.

Figure 1 Colonoscopy findings at his first admission. Colonoscopy showed diffuse ulceration, edema, and erythema from the descending colon to the rectum. These mucosal findings were most evident in the rectum above the peritoneal reflection. A: Colon; B: Rectum.
Further diagnostic work-up

After the diagnosis of ischemic colitis, he was treated with fasting and fluid replacement. However, his tenesmus continued, and his abdominal pain and bloody diarrhea improved. He was discharged from the hospital 12 d after admission.

Three weeks after discharge from the hospital, he presented to our clinic with similar abdominal pain. He underwent contrast-enhanced abdominal CT, which showed a nidus of small corkscrew vessels arising from the superior rectal artery (branch of the inferior mesenteric artery) and marked early inferior mesenteric vein enhancement (Figures 2 and 3). 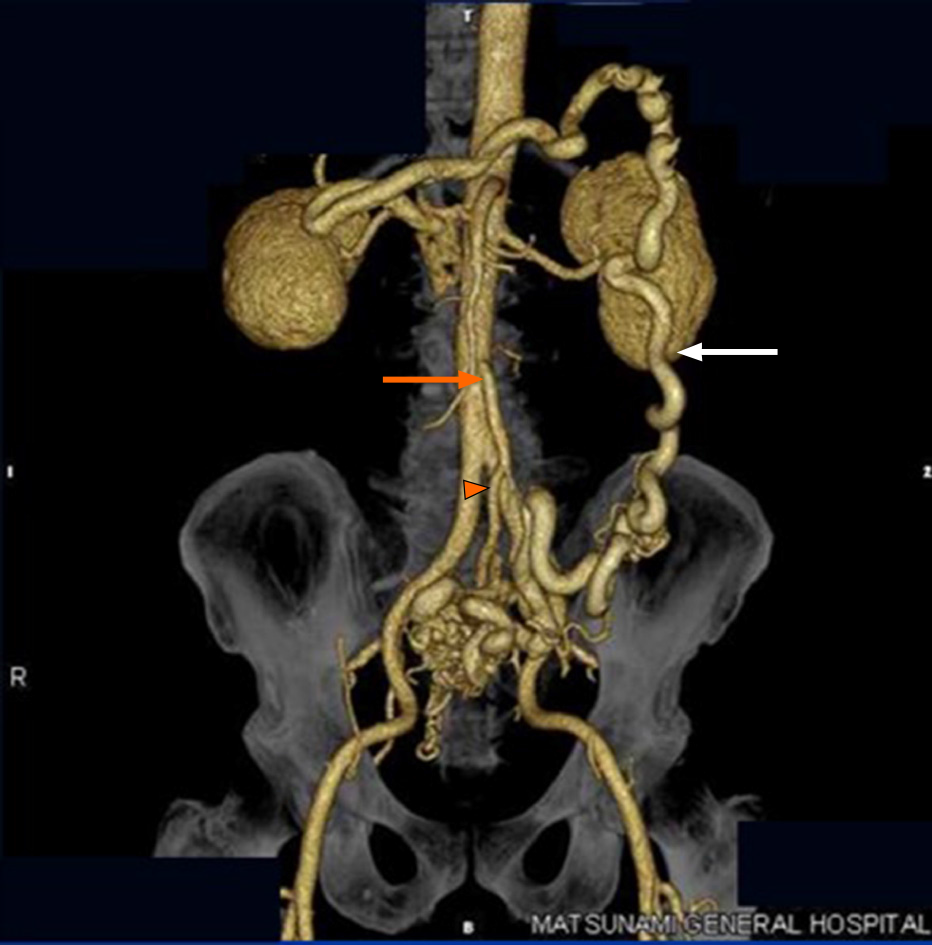 Based on contrast-enhanced abdominal CT, inferior mesenteric AVM was diagnosed.

We performed another colonoscopy, and most findings of colitis showed improvement, but not complete recovery. His abdominal pain was still present, and thus, another treatment was needed.

Rectal low anterior resection was performed 4 mo later. The range of AVM was wide, and thus, embolization could have caused more severe ischemia. The resected specimen showed dilated blood vessels from the superior rectal artery, and the sigmoid colon to the upper rectum wall were thickened and edematous.

Histopathological findings showed dilation of arteries and veins that were close and mixed; these findings were consistent with AVM (Figure 4).

The postoperative period was uneventful, and he has not had a recurrence of bloody diarrhea or abdominal pain for 3 years. 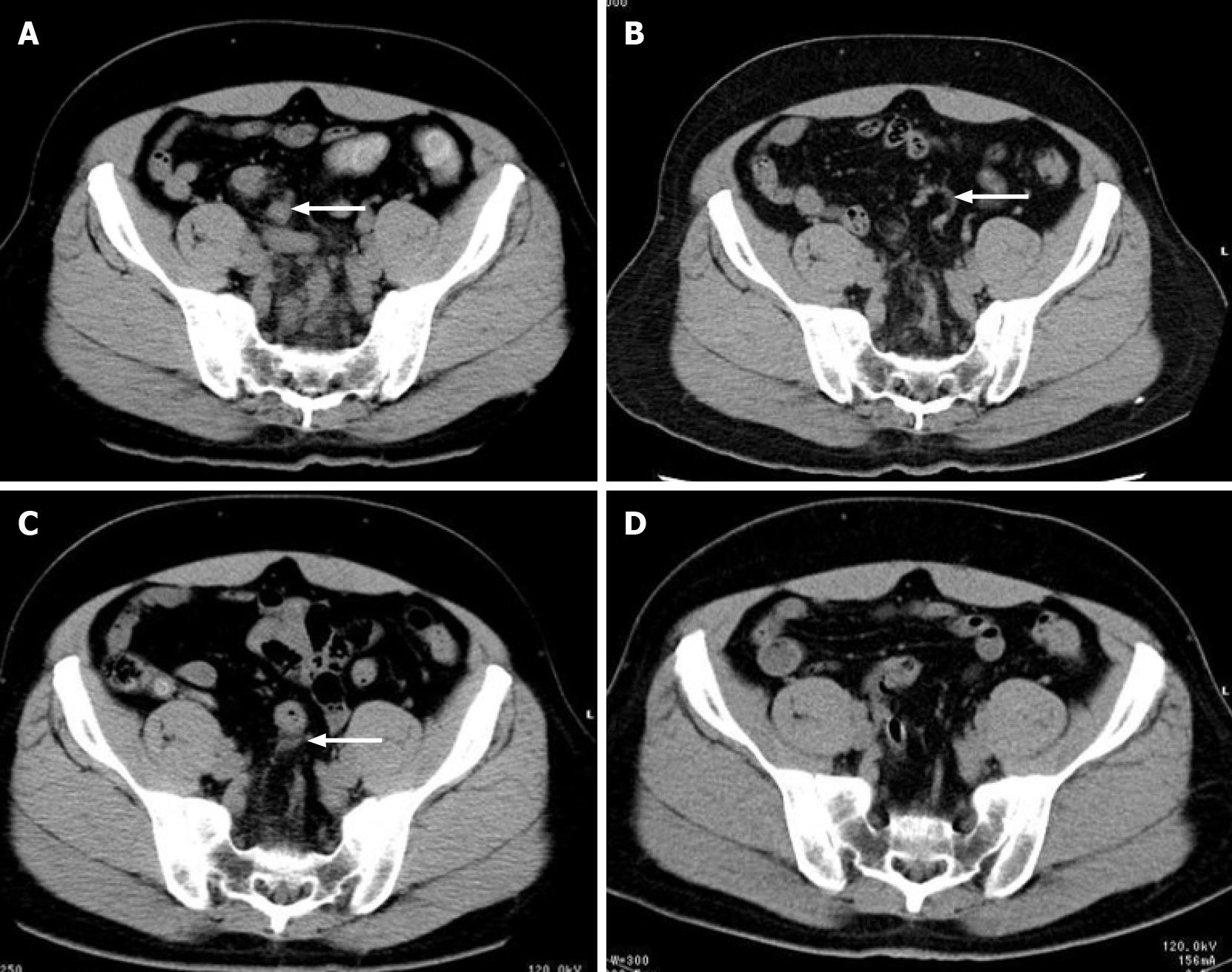 Figure 5 Recent abdominal computed tomography. A-D: Non-enhanced abdominal computed tomography images were taken before admission (A) and 2 years (B), 5 years (C), and 8 years (D) ago. The vessels around the rectosigmoid colon were not evident 8 years ago (D), but dilation of blood vessels around the rectosigmoid colon could have been detected 5 years ago (B and C).
DISCUSSION

AVMs and arteriovenous fistulas (AVFs) are often grouped together because the clinical courses of these disease entities are similar. AVFs are usually acquired, typically from previous trauma or iatrogenic events with surgery. On the other hand, AVMs are generally congenital or idiopathic. Congenital AVMs are caused by disruptions in vascular morphogenesis that result in persistent embryonic vessels that fail to regress and lead to a direct communication between the arterial and venous systems[3-6].

We identified 11 cases of ischemic colitis caused by inferior mesenteric AVMs reported in English[4-14]. All 11 cases were idiopathic AVMs without trauma or abdominal surgery, similar to our case. No report mentioned the natural history of AVMs. Only one case report mentioned that 4 years before ischemic colitis occurred, abdominal CT showed a normal inferior mesenteric artery[6]. Fortunately, we were able to examine the natural history of idiopathic AVM in our case. Comparing our patient’s previous abdominal CT, dilation of blood vessels around the rectosigmoid colon could have been detected 5 years ago. We could not determine if these vessels were arteries or veins, but they seem to have gradually grown (Figure 5). Our patient also underwent two colonoscopies 6 mo and 2 years before his first admission, and they showed only a colon polyp. During this time period, he did not have any abdominal symptoms. These results suggest that some idiopathic AVMs are not congenital, and grow slowly over years. Similar to our case, the median age of patients with idiopathic AVMs was 57 years (range: 36-83 years)[4-14]. Thus, some acquired factor may have played an important role in the growth of vessels.

Regarding brain AVM, Kim et al[15] described the idiopathic pathogenesis of brain AVM and indicated that even modest injury such as an unremarkable episode of trauma, infection, inflammation, irradiation, or a mechanical stimulus could cause an abnormal dysplastic response and result in brain AVM. The normal response to these injuries includes moderate angiogenesis, endothelial mitogenesis, and vascular stabilization. However, if an underlying structural defect is present, the normal response may shift towards an abnormal dysplastic response and result in brain AVM[15]. In our current case, he had no history of trauma or abdominal surgery, but he may have had an unremarkable episode of modest injury that could have caused his AVM. Additional factors and/or mechanisms of idiopathic inferior mesenteric AVM are still unclear, and further accumulation of cases is desired.

Diagnosing ischemic colitis caused by AVM is generally difficult. Some cases have been misdiagnosed as ulcerative colitis[7,8] or diverticulitis[5,9]. In our case, colonoscopy and non-enhanced abdominal CT did not lead to a correct diagnosis at his first admission. He was diagnosed with AVM following contrast-enhanced abdominal CT 3 wk after discharge from the hospital. Ischemic colitis around the rectum is very rare because the rectum is supplied by several arteries. When we detect ischemic colitis around the rectum, we have to consider this diagnosis carefully, and contrast-enhanced CT should be considered to find an AVM.

Concerning treatment for AVM, we selected surgery and not embolization. We considered that embolization may have exacerbated the ischemia because the range of AVM was widespread. Indeed, in most reported cases, surgical approaches were selected, and only two successful embolization cases were reported[8,9]. Several cases selected embolization first, followed by exacerbation of ischemia; hence, surgery was finally performed[4,6,12]. We need to consider how widespread the AVM is when we treat mesenteric AVMs.

We revealed the natural history of idiopathic AVM. Ischemic colitis around the rectum is very rare, and thus, we need to diagnose this condition carefully and consider the possibility of AVM. Further accumulation of cases is desired to understand the mechanisms of idiopathic AVM.