Pancreatic pseudocyst may cause serious gastrointestinal complications including necrosis, infection, and perforation of the gastrointestinal tract wall, but massive gastric bleeding is very rare.

We report a rare case of a 49-year-old man with life-threatening gastric bleeding from a pseudoaneurysm of the splenic artery perforating the stomach induced by pancreatic pseudocyst. During hospitalization, gastroscopy revealed a bare blood vessel in an ulcer-like depression of the greater gastric curvature, and computed tomography scan confirmed a pancreatic pseudocyst invading part of the spleen and gastric wall of the greater curvature. Arteriography showed that the bare blood vessel originated from a pseudoaneurysm of the splenic artery. The bleeding was controlled by the trans-arterial embolization, the patient’s recovery was rapid and uneventful.

Massive gastrointestinal bleeding could be a rare complication of pancreatic pseudo aneurysm.

Core Tip: Massive hemorrhage of the gastrointestinal tract is an infrequent complication of the pancreatic pseudocyst and pseudoaneurysm. We present herein, a novel case of a patient with life-threatening gastric bleeding from a pseudoaneurysm of the splenic artery as a complication of pancreatic pseudocyst perforating into the stomach, with trans-arterial embolization as a potential therapeutic modality for achieving hemostasis.

A 49-year-old male presented to the emergency room with pain in the left upper abdomen and melena, accompanied by symptoms of dizziness and weakness.

He had a history of alcoholism and was diagnosed with pancreatitis and type 2 diabetes for 1 year.

Laboratory tests showed that hemoglobin was 63 g/L (normal range: > 120 g/L). The fecal occult blood result was positive, and the remaining biochemical tests including amylase were normal.

Gastroscopic examination revealed an ulcer-like depression on the upper part of the greater gastric curvature and mucus secretions adhered to the epithelial surface. The surrounding mucosa exhibited thickening and edema with obscured structural outlines. The gastric folds could not be fully extended after gas charging. We suspected that upper gastrointestinal bleeding was caused by a gastric ulcer or gastric cancer. The condition improved after proton pump inhibitors and octreotide pumping hemostasis treatment for 1 wk, but the patient suddenly excreted watery dark red stool again, accompanied by massive hematemesis. Gastroscopy was repeated, and oozing blood was found in the ulcer-like depression of the gastric greater curvature previously observed, blood vessels were exposed after repeated rinsing (Figure 1). Computed tomography (CT) scan confirmed widespread subversion of pancreatic parenchyma, with evidence of multiple inhomogeneous hypodense and partially confluent cystic formations. The pancreatic pseudocyst invaded part of the spleen and greater curvature of the stomach; the invaded gastric mucosa was irregularly thickened and emitted an uneven signal (Figure 2). Emergency digital subtraction angiography (DSA) revealed that the pseudoaneurysm arose from the splenic artery (Figure 3).

Figure 2 Computed tomography images confirmed that the pancreatic pseudocyst invaded part of the spleen and greater curvature of the stomach. 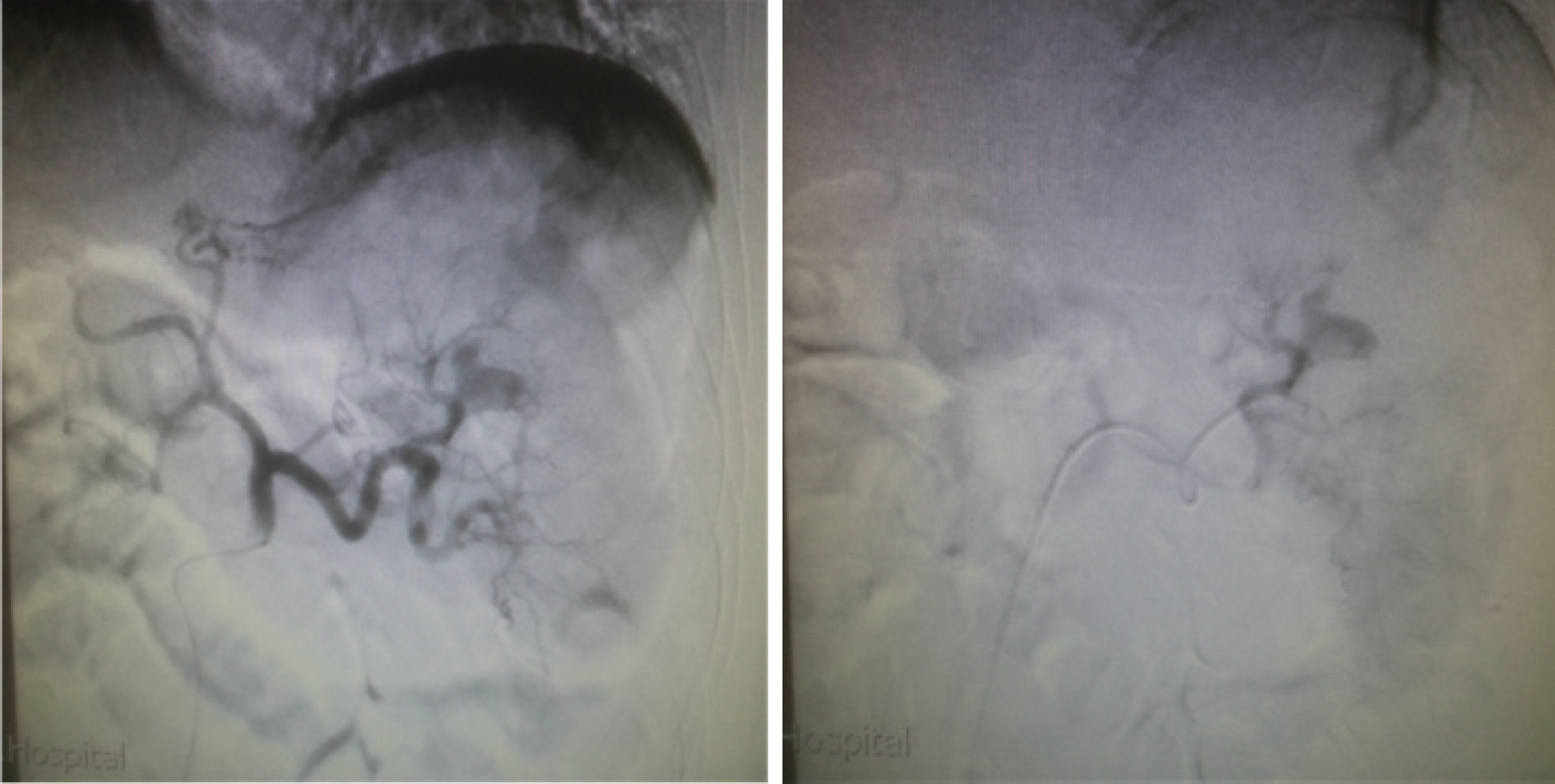 Finally, the patient was diagnosed with upper gastrointestinal bleeding from a pseudo aneurysm of the arteria lienalis secondary to perforated pancreatic pseudoaneurysm invading into the stomach.

The patient underwent surgical treatment with TAE (coil embolization) of the splenic artery, which was successfully performed and the bleeding was effectively controlled (Figure 4).

One week after the operation, the patient’s recovery was rapid and uneventful.

The incidence of pancreatic pseudocyst associated with hemorrhage is approximately 5%-10%, with a mortality rate of about 50%[3,4]. The clinical feature varies depending on the location and severity of the bleeding, thus presenting in different forms, from abdominal pain to hypovolemic shock[5,6]. Massive bleeding has been reported in 2%-10% of patients with pancreatitis and occurs as upper or lower gastrointestinal tract bleeding[7,8]. The rapid development of an abdominal painful mass suggests intracystic bleeding. Intraperitoneal bleeding causes abdominal distension and hemorrhagic shock.

The main pathogenesis involves erosion of the pancreas, peripancreatic vessels, and surrounding tissues because of elastase and trypsin, which weaken tensile strength and cause rupture or bleeding after pseudoaneurysm formation. The splenic artery is the most frequently involved site of pancreatitis complicated with pseudoaneurysm[9]. Other sites include the gastroduodenal artery, the pancreaticoduodenal artery, and the hepatic artery. We conducted a review of published case reports. These reports described patients with pancreatic pseudoaneurysms that communicated with the bowel lumen in the past 5 years (Table 1)[10-26]. When the cyst invades the gastro-intestinal tract, bleeding can appear in the abdomen, stomach, duodenum and even the lower digestive tract, presenting as massive bloody stool and hematemesis or chronic intermittent bleeding after abdominal pain[27,28]. Regarding hemorrhage of the digestive tract or abdominal cavity in pancreatitis, localization of the bleeding in a timely and accurate manner is very important. CT and B-ultrasound are the first choices for imaging evaluation of pancreatitis. These methods clarify the severity and extent of pancreatitis to determine whether the condition is associated with pancreatic abscess or pseudoaneurysms, and accurately assess the condition of peripancreatic vessels[29,30]. Computed-tomography angiography (CTA) can improve the diagnostic positive rate during the bleeding period. CTA can demonstrate the full extent of a pseudoaneurysm, in case of partial thrombosis, and its effect on the adjacent viscera. But CTA has the disadvantage of radiation exposure, which is particularly critical in young patients[31]. DSA is the gold standard for the diagnosis of hemorrhage of pancreatic pseudoaneurysms, contrast agent extravasation can be found when the bleeding is greater than 0.5 mL/min, which is important for the diagnosis of hemorrhage position. We compared three therapeutic modalities (Table 2).

In such cases, effective therapeutic procedures include percutaneous, intravascular embolization (TAE), or immediate laparotomy[28], laparotomy during hemorrhagic shock can give rise to serious complications. Endovascular treatment has several advantages compared to open surgical repair, allowing accurate localization of pseudoaneurysm and assessment of collateral vessels; it is associated with a lower post-operative morbidity and mortality (4%-19%) compared to surgery and a high rate of technical success (67%-97%)[32]. Moreover, if rebleeding occurs, the procedure can be promptly repeated. Therefore, for patients who are at risk for massive bleeding, accompanied with unstable vital signs, selectively DSA examination should be performed immediately to identify the bleeding location, and TAE is likely to be the first choice for temporary control of bleeding. Supplementary endovascular options include use of liquid embolic agents, temporary embolic materials (Gelfoam slurry; Upjohn Co., Kalamazoo, MI, United States) or coil embolization[33]. Many endovascular treatment options are today available mainly depending on expendability of parent artery and size of pseudoaneurysmal neck. Parent artery is expendable when adequate extensive collateral circulation is present; in this case aggressive coil embolization can be performed. Coil embolization of expendable arteries is preferable distally and proximally to the site of extravasation (the so called “sandwich” technique), thereby preventing backflow from the collateral circulation[34,35]. Rebleeding has been reported in 37% of patients, and urgent surgery should be limited to when embolization fails. Even after successful immediate embolization[28], the safety and success rate of TAE treatment for the pseudoaneurysm hemorrhage need to be improved in the future.