Sodium valproate is widely used in the treatment of epilepsy in clinical practice. Most adverse reactions to sodium valproate are mild and reversible, while serious idiosyncratic side effects are becoming apparent, particularly hepatotoxicity. Herein, we report a case of fatal acute liver failure (ALF) with thrombotic microangiopathy (TMA) caused by treatment with sodium valproate in a patient following surgery for meningioma.

A 42-year-old man who received antiepileptic treatment with sodium valproate after surgery for meningioma exhibited extreme fatigue, severe jaundice accompanied by oliguria, soy sauce-colored urine, and ecchymosis. His postoperative laboratory values indicated a rapid decreased platelet count and hemoglobin level, severe liver and kidney dysfunction, and disturbance of the coagulation system. He was diagnosed with drug-induced liver failure combined with TMA. After plasma exchange combined with hemoperfusion, pulse therapy with high-dose methylprednisolone, and blood transfusion, his liver function deteriorated, and finally, he died.

ALF with TMA is a rare and fatal adverse reaction of sodium valproate which needs to be highly valued.

Core Tip: Sodium valproate is widely used in the treatment of epilepsy in clinical practice although it has potential hepatotoxicity. Herein, we report a case of fatal acute liver failure (ALF) with thrombotic microangiopathy (TMA) caused by sodium valproate treatment. A history of chronic hepatitis B virus infection or combination therapy with sodium valproate and carbapenem may increase the risk of ALF. The combination therapy of plasma exchange, glucocorticoid, and supportive therapy is essential for TMA. Organ transplantation at the early stage of the disease may be the first choice for critically ill patients. Our case report can facilitate further studies on the diagnosis and therapy of ALF with TMA.

Sodium valproate is one of the common fatty-acid antiepileptic drugs in the current daily clinical routine[1]. It is effective in the treatment of various types of epilepsy to different extents. With extensive application in the clinic, an increasing number of adverse reactions of sodium valproate have been reported[2,3]. Adverse reactions involve multiple organ systems, such as the hematological system, nervous system, and digestive system[4]. Sodium valproate has been the most common drug to induce liver injury among all antiepileptic drugs in recent years[5]. The proportion of patients with hepatic dysfunction caused by sodium valproate has been reported to be as high as 5%-10%[3]. Symptoms in most patients are temporary and reversible, while a minority can be fatal, and some patients can develop drug-induced thrombotic microangiopathy (DI-TMA)[6]. We report a case of sodium valproate-induced acute liver failure (ALF) with thrombotic microangiopathy (TMA), which has not been reported previously.

A 42-year-old male was admitted to the Department of Hepatobiliary Internal Medicine 10 d following surgery for meningioma with fatigue and abdominal distension for 1 d.

Figure 1 Major medications used in the patient during hospitalization. The dosage of the antibiotics are as follows: Ceftriaxone 2 g/q12h; vancomycin 1000 mg/q12h; biapenem 0.6 g/q12h; linezolid 600 mg/q12h.

The patient was diagnosed with hepatitis B surface antigen (HBsAg) positivity without antiviral treatment for 3 years due to continuous normal hepatic function, and hepatitis B virus (HBV) DNA was < 500 IU/mL (< 500 IU/mL) during periodic re-examinations.

The patient did not have a history of smoking or alcoholism or a remarkable family medical history.

The patient was in a somnolent state with myoclonic jerks in the upper limbs. His skin and sclera were severely yellow. Bilateral petechia and ecchymosis were noted both in the lower limbs and near the injection and puncture sites. His abdomen was distended, with tympanic percussion sounds. 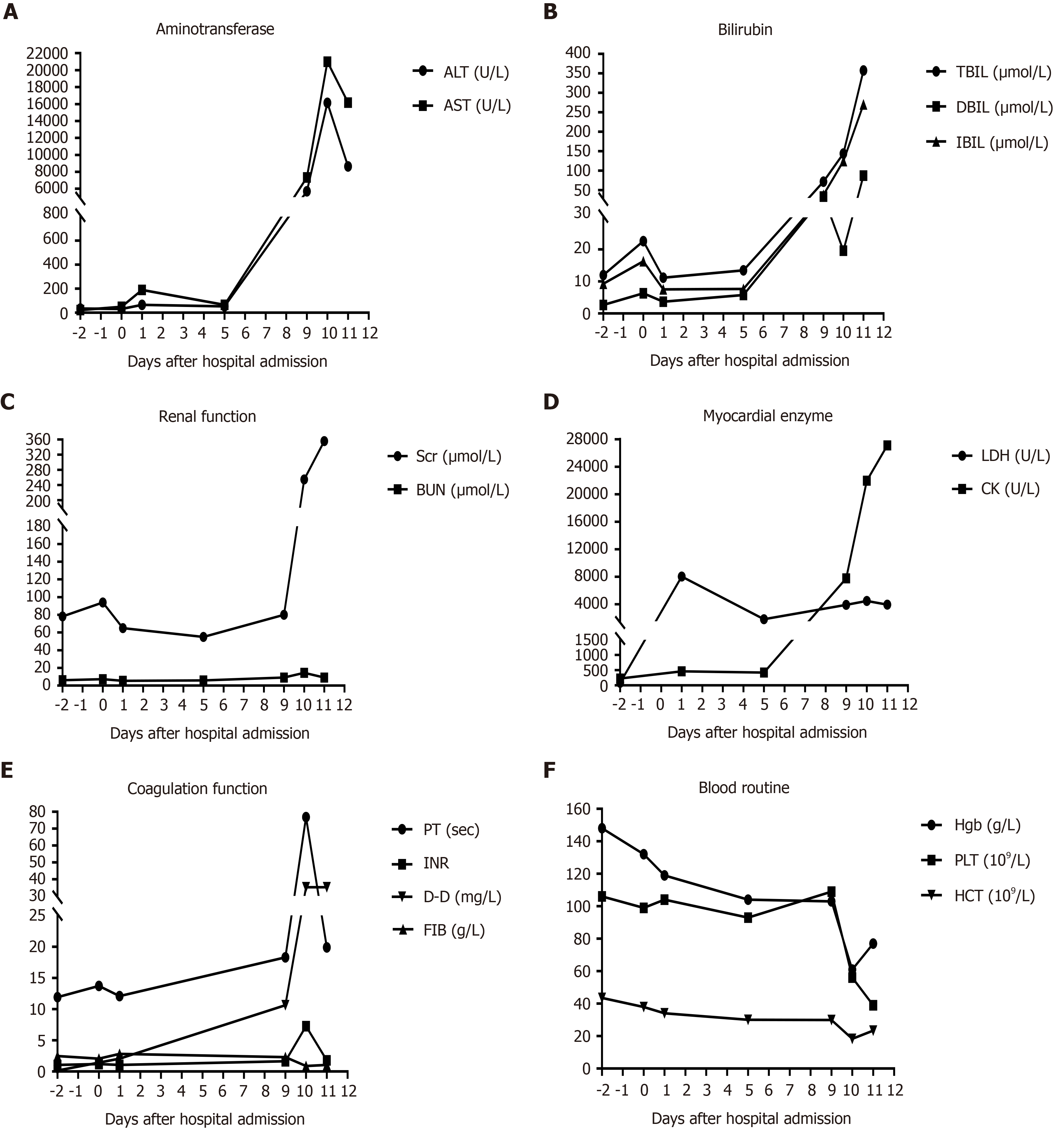 The morphology and density of the liver were normal on preoperative day 5. On postoperative day 9, geographical patterns of low-density shadow in the liver were demonstrated on computed tomography (CT), which suggested extensive hepatic necrosis. No noticeable abnormality was detected in the kidneys and spleen, but a small amount of pelvic and peritoneal effusions. The abdominal CT of the patient during hospitalization is shown in Figure 3.

The patient was placed on the active waiting list for liver transplantation as soon as the diagnosis was made. Sequential plasma exchange (PE) with fresh frozen plasma and hemoperfusion were initiated immediately after admission. After the above therapy, the patient was still anuric, and continuous renal replacement therapy was performed. He underwent treatment with methylprednisolone 80 mg per day for 2 d on the basis of PE. Meanwhile, he was given human prothrombin complex and washed red blood cells to improve coagulation function and anemia. Polyene phosphatidylcholine, glutathione, ademetionine 1,4-butanedisulfonate, and ornithine aspartate were used to promote hepatic recovery.

After treatment, the patient’s hemolysis was controlled, the color of his separated plasma gradually changed from red-brown to dark yellow, and the hemoglobin level did not decline. However, he was still in a persistent anuric and coma state, and there were no suitable liver or kidney sources for transplantation. Finally, the patient died in the early morning of postoperative day 12.

On the 9th postoperative day for meningioma, the patient developed ALF with extreme fatigue, severe jaundice, prolonged prothrombin time, and acute progressive hepatic coma. Although he was an HBsAg carrier, the HBV DNA in his serum was negative; thus, the possibility of liver injury caused by HBV reactivation can be excluded. In addition, the patient’s history suggested no trauma, exertion, hyperthermia, or infections, which are common causes for liver failure, and his symptoms did not include myalgia, which is typical in rhabdomyolysis. Although he was on several medications during hospital stay, the major adverse effects did not include rhabdomyolysis. Therefore, the liver failure was not considered to be associated with rhabdomyolysis. Because his alcoholism history and hematological indices of autoimmune diseases were negative, we finally considered his ALF to be attributed to the drug.

Sodium valproate, vancomycin, and linezolid are the common drugs associated with DILI[5,7,8]. Among all the adverse reactions of vancomycin, most are rapid onset, and renal injury occurs more frequently than liver injury[9]. Common adverse reactions of linezolid include myelotoxicity and peripheral and optic neuropathy[10]. Studies show that liver injury induced by linezolid usually occurs after two weeks of medication, with a mild elevation of transaminase[11]. The characteristics of our patient who developed severe liver dysfunction after using linezolid for only 5 d were inconsistent with those reported in the literature. Liver injury is one of the most often reported adverse effects of sodium valproate because sodium valproate is metabolized by glucuronidation and mitochondrial beta-oxidation in the liver[5]. ALF due to sodium valproate can still be encountered in the clinic[12]. The RUCAM scoring table is recognized as the primary DILI causality assessment tool[13]. The RUCAM score of this patient was 6 (probable) when we completed the causality assessment for sodium valproate. Thus, we considered that his liver injury was induced by sodium valproate.

Except for ALF, TMA should be considered in diagnosis. Generally, microangiopathic hemolytic anemia is a sine qua non for the diagnosis of TMA[20]. This patient exhibited anuria, hemoglobinuria, progressively decreased levels of hemoglobin and platelets, elevated proportion of reticulocytes, and significantly elevated bilirubin and D-D level during the early stage of his disease, which were consistent with the characteristics of TMA. However, no fragmented erythrocytes were observed on the peripheral blood smear either before or after PE. Cases of TMA without the presence of fragmented erythrocytes on the peripheral blood smear have been reported previously[21,22]. This patient responded to PE and methylprednisolone. Therefore, a diagnosis of TMA was suggested. As far as we are concerned, the presence of fragmented erythrocytes is essential for TMA diagnosis in most cases, but not all.

TMA is defined as a clinical syndrome characterized by thrombocytopenia, hemolytic anemia, and multiple organ dysfunction[21]. The microthrombosis of capillaries and arterioles is the typical pathological feature of TMA. Thrombotic thrombocytopenic purpura (TTP) and hemolytic uremic syndrome (HUS) are the two clinical presentation forms of TMA. TTP mostly involves the nervous system, while there is a preponderance of renal injury in HUS patients. The etiology of TMA is multifactorial, including genetic factors and acquired risk factors. DI-TMA is a type of acquired TMA that is caused by multiple drugs, such as antitumor agents, antiplatelet drugs, and oral contraceptives. Studies show that DI-TMA occurs via two main mechanisms: Immune-mediated reactions or dose-dependent toxicity[23]. TMA mediated by dose-dependent reactions has a slow, progressive onset, while immune-mediated TMA has a rapid onset[21]. Our patient can be classified as having immune-mediated DI-TMA.

In summary, this is the first case report of ALF with TMA caused by sodium valproate, which is notable. However, there were some limitations to our study. Liver pathology was unavailable. Without results regarding ADAMTS13 activities or anti-ADAMTS13 antibodies, we found it difficult to distinguish between HUS and TTP in this patient. Establishing an animal model can facilitate further studies on pathogenesis and pathophysiological state.

ALF with TMA, which has not been reported before, is a fatal complication caused by sodium valproate. It is a disease with sudden onset and rapid progression, which needs great attention. A history of chronic HBV infection or combination therapy with sodium valproate and carbapenem may increase the risk of ALF. The combination therapy of PE, hemoperfusion, glucocorticoid, and supportive therapy is essential for TMA. However, it is not effective for all. For critically ill patients, organ transplantation should be considered first.

The authors would like to thank all researchers and study participants for their contributions.