Research Domain of This Article
Rehabilitation

Herpes zoster is a painful infectious disease caused by the varicella zoster virus. Herpes zoster radiculopathy, which is a type of segmental zoster paresis, can complicate the disease and cause motor weakness. This complication should be considered when a patient with a rash complains of acute-onset motor weakness, and the diagnosis can be verified via electrodiagnostic study.

A 64-year-old female with a history of asthma presented to the emergency department with stabbing pain, an itching sensation, and a rash on the right anterior shoulder that had begun 5 d prior. Physical examination revealed multiple erythematous grouped vesicles in the right C4-5 and T1 dermatome regions. Because herpes zoster was suspected, the patient immediately received intravenous acyclovir. On the third hospital day, she complained of motor weakness in the right upper extremity. Magnetic resonance imaging of the cervical spine revealed mild intervertebral disc herniation at C4-C5 without evidence of nerve root compression. On the 12th hospital day, electrodiagnostic study revealed right cervical radiculopathy, mainly in the C5/6 roots. Six months later, monoparesis resolved, and follow-up electrodiagnostic study was normal.

This case emphasizes that clinicians should consider the possibility of post-herpetic paresis, such as herpes zoster radiculopathy, and that electrodiagnostic study is useful for diagnosis and follow-up.

A 64-year-old female presented with stabbing pain, itching, and a rash on her right anterior shoulder. Moreover, she complained of motor weakness in the right upper extremity on the third hospital day.

The patient reported that, 5 d prior, a rash had emerged on her right shoulder and was accompanied by stabbing pain. Her skin symptoms and pain became worse over time, and she was hospitalized through the emergency department. Her initial visual analog scale pain score was 6/10.

The patient had a medical history of asthma.

On initial physical examination, there were multiple erythematous grouped vesicles in the right C4-5 and T1 dermatome regions (Figure 1). Hypesthesia was noted in the right C5 dermatome. There were no findings of muscle weakness at initial evaluation. 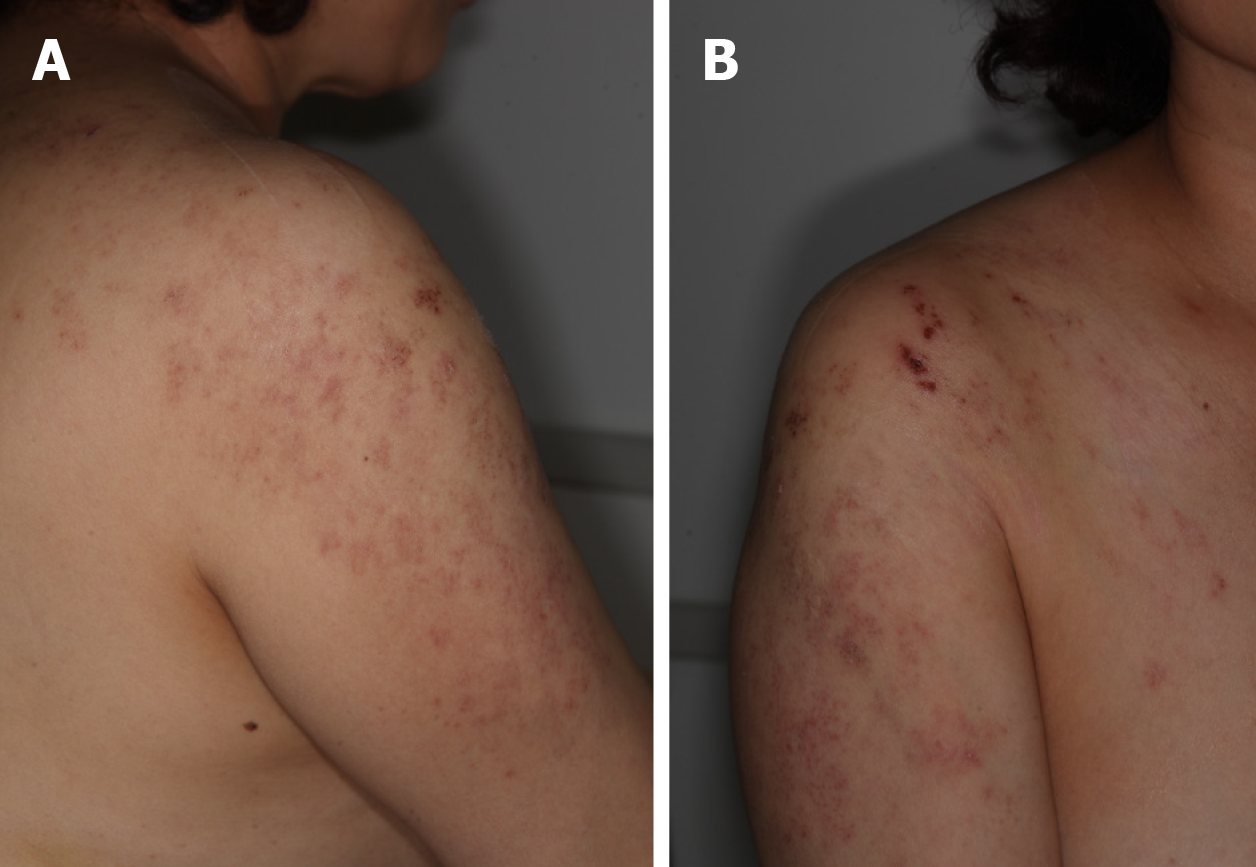 Computed tomography of the brain revealed no evidence of abnormalities in the brain parenchyma. Magnetic resonance imaging (MRI) of the cervical spine revealed cervical kyphosis and spondylosis with spur formation at C4-C6 (Figure 2A). Mild intervertebral disc herniation at C4-C5 without evidence of nerve root compression was also noted on MRI (Figure 2B).

On the 12th hospital day, electrodiagnostic study was performed to determine the cause of monoparesis in the right upper extremity. On needle electromyography, abnormal spontaneous activity (ASA) was observed in the right deltoid, teres major, and infraspinatus muscles, which are innervated by the C5 root. The right flexor carpi radialis, biceps, brachialis, and C5/6 paraspinalis muscles showed increased insertional activity. Long duration polyphasic motor units were found in the right deltoid, and the motor unit action potential recruitment pattern was reduced in the right biceps, deltoid, brachialis, and infraspinatus (Table 1).

The motor nerve conduction study indicated that latent onset of right axillary compound muscle action potential (CMAP) was delayed to 5.2 msec compared to 3.6 msec of the left axillary nerve, and amplitude of the right axillary CMAP was slightly decreased to 4.9 mV compared to 6.4 mV of the left axillary nerve. Sensory nerve conduction study showed normal values, except for delayed conduction velocity in bilateral median sensory nerve action potentials around the wrists, which is sub-clinically compatible with carpal tunnel syndrome (Table 2). F-waves in the bilateral upper extremities were normal. These electrodiagnostic findings revealed right cervical radiculopathy, mainly from the C5/6 roots. Based on the laboratory, radiologic, and electrodiagnostic findings, the patient was diagnosed with herpes zoster radiculopathy of the right C5/6 roots.

The final diagnosis of the presented case was herpes zoster radiculopathy of the right C5/6 roots based on electrodiagnostic findings.

Based on an initial suspected diagnosis of herpes zoster infection, intravenous acyclovir (250 mg every 8 h) was immediately administered and continued until the 10th hospital day. Tramadol (37.5 mg daily), acetaminophen (325 mg daily), and gabapentin (600 mg daily) were used for pain control.

Under the impression of herpes zoster radiculopathy, the patient received comprehensive rehabilitation including occupational therapy and electrical stimulation therapy on the right upper extremity during her hospital course. The rehabilitation program consisted of maintaining range of motion, strengthening exercises, and enhancing functional skills of daily living. Electrical stimulation therapy was performed to the deltoid and infraspinatus muscles. These rehabilitation treatments were performed for approximately 2 wk and discontinued after discharge.

On the 16th hospital day, the strength of the right shoulder flexor was slightly improved to 2/5, and the right elbow flexor was improved to 3/5. Symptoms of skin rash and stabbing pain resolved, and the patient was discharged from the hospital.

In the present case, dermatologic symptoms and electrodiagnostic findings were consistent with herpes zoster radiculopathy. According to a previous study, approximately 3%-5% of herpes zoster patients also experienced segmental limb paresis[4]. Motor weakness is frequent in the C5-C7 segments, affecting the upper limbs, and in the L1-L4, affecting the lower limbs[4]. Generally, motor weakness occurs several days after the onset of skin lesions[5].

Although the pathology of herpes zoster radiculopathy remains unclear, it is presumed that the virus causes local neuritis in the spinal nerve and gains access to motor axons[6]. Direct viral spread from the dorsal root ganglion to the anterior horn cell is thought to be the most likely pathophysiology[7]. Gadolinium-enhanced MRI findings from one report demonstrated that localized enhancement of the spinal nerve roots showed hypervascularity and disruption of the blood-nerve barrier caused by virus-induced inflammation[7]. Moreover, another study postulated that cell-to-cell contact is the major route of viral spread rather than intra-axonal spread from a dorsal root ganglion[8].

Previous reports suggested that appropriate antiviral therapy could be effective in reducing the incidence of segmental zoster paresis and the severity of electrophysiologic alterations[10]. Intravenous acyclovir and steroids are recommended for suppressing infections[10]. However, according to Kawajiri et al[4], initial antiviral treatment was not sufficient to prevent motor weakness in patients who developed segmental zoster paresis[4]. Likewise, the patient in this case report presented with motor weakness despite immediate administration of intravenous acyclovir. Early comprehensive rehabilitation is recommended for all patients with motor weakness secondary to herpes zoster radiculopathy[11]. Rehabilitation programs prevent disuse atrophy and range of motion limitation, playing an important role in recovery from motor weakness. Further clinical trials are needed to identify the effects of antiviral treatment or rehabilitation in herpes zoster radiculopathy compared with spontaneous improvement.

The prognosis of motor weakness caused by herpes zoster is relatively good, with 66% of patients with zoster paralysis recovering completely within 12 mo and 17% reported to have permanent paralysis[12]. Despite the good prognosis of segmental zoster paresis, permanent paresis can occur due to necrosis in anterior horn cells[12]. Therefore, administering antiviral treatment in the early stages might be beneficial to patients with segmental zoster paresis and could improve prognosis.

There are a few limitations to consider in this case report. First, MRI of the cervical spine was performed without gadolinium enhancement. Therefore, we could not identify virus-induced inflammatory signs in cervical nerve roots. Second, there were MRI findings of cervical spondylosis and mild disc herniation C4 to C5. Thus, we could not completely rule out the possibility of cervical root irritation caused by cervical disc herniation. However, there was no definite evidence of nerve root compression on cervical MRI. Moreover, considering that acute motor weakness only appeared after skin rash and the patient did not complain of posterior neck pain, it is likely that herpes zoster radiculopathy caused her motor weakness, rather than cervical disc herniation. Third, a follow-up electrodiagnostic study was performed at 6 mo from onset and was not repeated. If electrodiagnostic study had been performed several more times during the follow-up period, the course of motor nerve axonotmesis or changes in the amount of ASA could have been reported in greater detail.