Alopecia areata (AA) is a common autoimmune disease characterized by hair loss. AA appears in extensive forms, such as progressive and diffusing hair loss (diffuse AA), a total loss of scalp hair (alopecia totalis), and complete loss of hair over the entire body (alopecia universalis). Recently, mesenchymal stem cells (MSCs) have been identified as a therapeutic alternative for autoimmune diseases. For this reason, preclinical and case studies of AA and related diseases using MSCs have been conducted.

Core Tip: Previous studies demonstrated that transplantation of mesenchymal stem cells (MSCs) was effective in treating autoimmune diseases. Alopecia areata (AA) and its related diseases are a representative autoimmune disease. In this case study, we used allogenic, minimally manipulated umbilical cord MSCs for the successful treatment of AA and alopecia universalis. This is the first report of using minimally manipulated umbilical cord MSCs to treat AA and related diseases.

Alopecia areata (AA) is an autoimmune disease characterized by varying degrees of hair loss in individuals. It affects more than 6.5 million people in the United States, has a worldwide prevalence of 0.1%-0.2%, and a lifetime risk of 2% in the general population[1-5]. There are three major forms of AA progression: Diffused loss of hair in well-defined patches (diffuse AA), total loss of hair from the scalp (alopecia totalis, AT), and complete loss of body hair (alopecia universalis, AU)[5-7]. Patients with AA suffer from extensive hair loss that can have a devastating impact on their quality of life[8]. Nonetheless, the treatment options for AA are limited, with a poor prognosis. Therapy for hair loss includes the use of glucocorticoids, minoxidil-based drugs, or hair transplantation, all of which present varying side effects[5-7]. Therefore, these options are not usually recommended for patients with diffuse AA, AT, or AU.

Advances in the understanding of AA have led to the development of new treatments. Janus kinase inhibitors as a treatment for AA have been studied since their efficacy for AA in mice was confirmed in 2014[9-13]. Platelet-rich plasma therapies have varied efficacy in the treatment of AA[13-15]. The results of in vitro and in vivo animal tests have shown that mesenchymal stem cell (MSC) transplantation is a powerful alternative to traditional AA treatment[16-20]. The function of MSCs as an immunomodulator has made it a promising potential treatment for AA and related diseases[21-24]. However, because only a limited number of cases for treatment of AA with MSCs have been reported, the effectiveness is not well known[16,25-27]. Therefore, there is a need for sufficient case studies of AA treatment using MSCs.

Minimally manipulated umbilical cord derived-MSCs (MM-UC-MSCs) (used in this study) are isolated from the umbilical cord, immediately frozen, and stored at -197 °C without any other manipulations including cell culture. Minimally manipulated-MSCs (MM-MSCs) have better proliferation and differentiation capacities than cultured MSCs. Therefore, their therapeutic effect is expected to be better[28-30]. Moreover, it is easy to obtain enough cells for transplantation because the umbilical cord has more cells that can be acquired than adipose tissue or bone marrow[31]. It is generally known that MSCs are safe in vivo and do not form tumors[32-34]. Also, long-term culturing of MSCs in vitro has the potential to cause age-related modifications and genetic mutations, and MM-MSCs are safer than manipulated MSCs[35-39]. Based on these previous results, we decided to use MM-UC-MSCs to treating AA and related diseases. The safety and efficacy of MM-UC-MSCs for the treatment of AA and AU will be shown through this case study.

Case 1: On May 29, 2016, a 55-year-old woman, suffering from AA, visited our clinic. She had two areas of complete baldness on the left and right sides of the scalp.

Case 2: The patient developed AA in six areas on the scalp, with an onset of April 2017. She was given local steroid hormone injections at another hospital for 1 year. As a result, five of the six lesions were cured. However, a lesion at the top of scalp was unaffected by treatment.

Case 3: The patient was diagnosed with AU at the age of 12. After the onset, various medications were prescribed and hair transplantation was performed, both of which were unsuccessful.

All patients had no history of specific illnesses.

All patients had a free personal and family history. 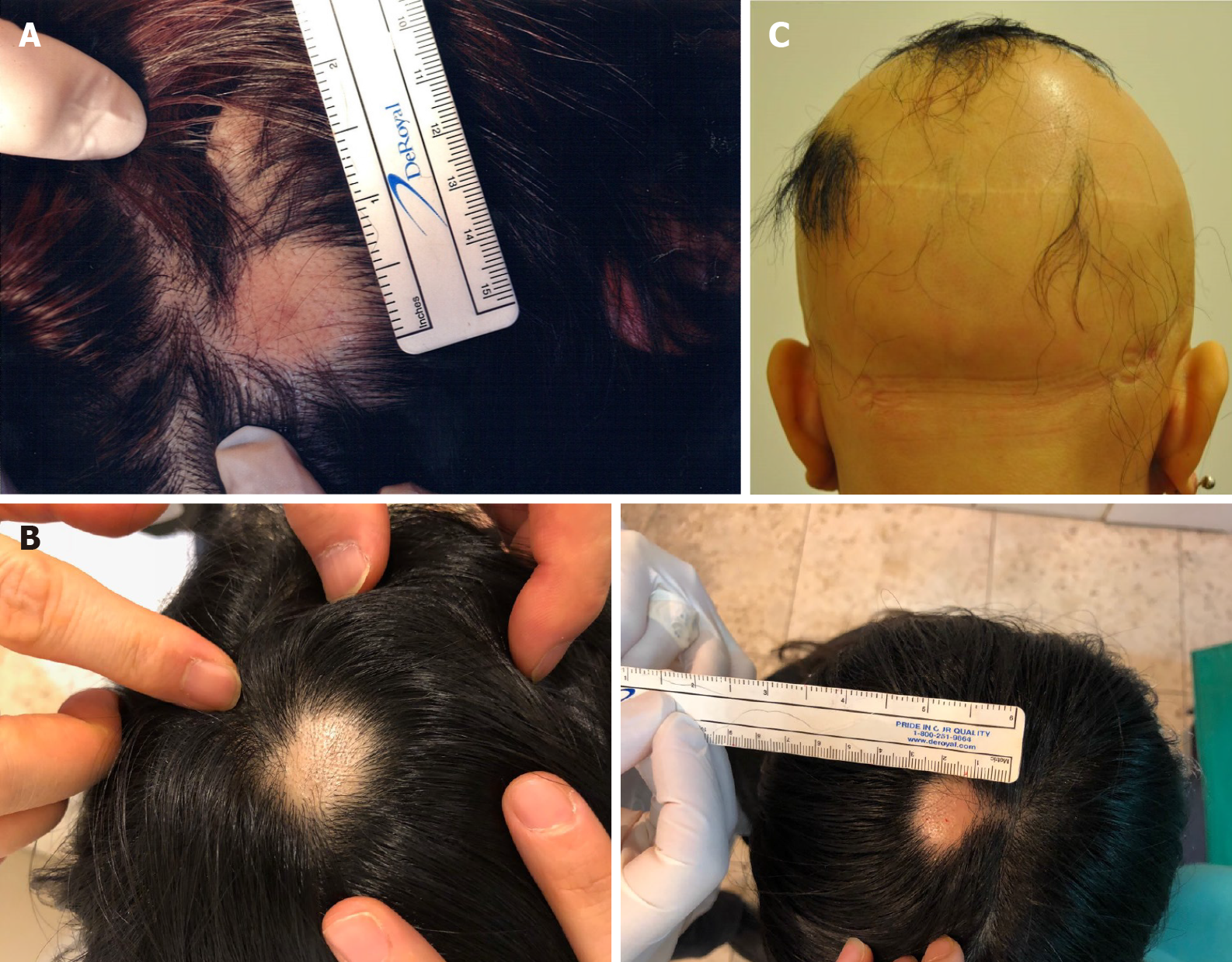 Case 3: The patient had little hair on her scalp (Figure 1C).

Laboratory examinations were not performed.

Imaging examinations were not performed.

Cases 1 and 2: The patients were diagnosed with AA based on the formation of a round or oval-shaped area of baldness.

Case 3: The patient was diagnosed with AU because she had little hair on her body.

Umbilical cords were donated by the Obstetrics and Gynecology Department at Lynn Woman’s Hospital, after disinfection. An agreement for an umbilical cord donation was obtained from the mother. We performed a total of seven blood and urine tests from the mother, including for hepatitis B surface antigen, hepatitis B surface antibody, hepatitis C antigen, hepatitis C antibody, human immunodeficiency virus, syphilis rapid plasma reagin, and human T-cell lymphotropic virus type I and II antibody, to confirm the safety of the donated umbilical cord.

Evaluation of quality and purity of isolated MM-UC-MSCs

We confirmed the expression of MSC markers such as CD73, CD90, and CD105 from MM-UC-MSCs using a using a CyFlow® Cube 6 (Sysmex) and FCS Express 5 software (Figure 2). We confirmed the isolated MM-UC-MSCs expressed MSC markers CD73 (77.48%), CD90 (95.67%), and CD105 (95.40%). We determined that the isolated MM-UC-MSCs were of the same quality as our previous results because the MM-UC-MSCs isolated by the same method uniformly expressed CD73 (70%-80%), CD90 (90%-100%), and CD105 (90%-100%). The cells were assessed using a sterility test, mycoplasma test, endotoxin test, and testing for adventitious agents of biological products, according to regulations from the Ministry of Food and Drug Safety in the Republic of Korea (data not shown).

After thawing the frozen MM-UC-MSCs, the cells were obtained by centrifugation. The cells were resuspended in 0.9% physiological saline at a concentration of 1 × 106 cells/mL. Then, 1 mL of the solution was filled into an Ultra-FineTM II Insulin Syringe (BD Biosciences, Franklin Lakes, NJ, United States).

Case 1: The injection solution containing MM-UC-MSCs was injected in and around each lesion site at 1 cm intervals. Each injection site received 0.25 mL of the solution for a total of 1 mL at each AA lesion. The patient received a total of 15 treatments over a period of 6 mo (Table 1).

Case 2: The injection solution containing MM-UC-MSCs was injected in and around the lesion site at 1 cm intervals. Each injection site received 0.25 mL of the solution for a total of 1 mL at each AA lesion. The patient received a total of two treatments over a period of 1 mo (Table 2).

Case 3: The injection solution containing MM-UC-MSCs was injected into the entire scalp at 2-3 cm intervals. Each injection site received 0.25 mL of the solution. The patient received a total of fourteen treatments over a period of 12 mo (Table 3). 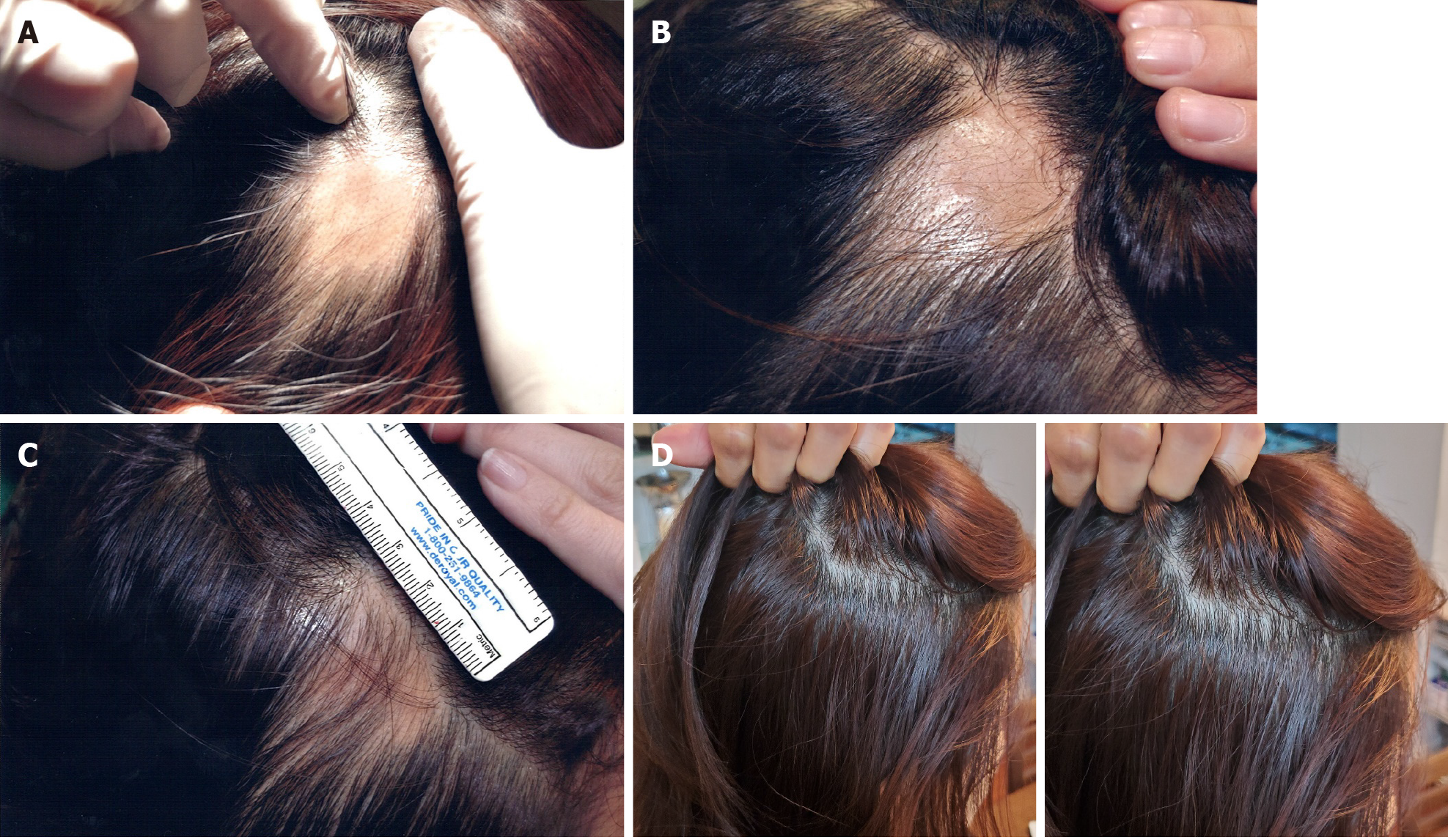 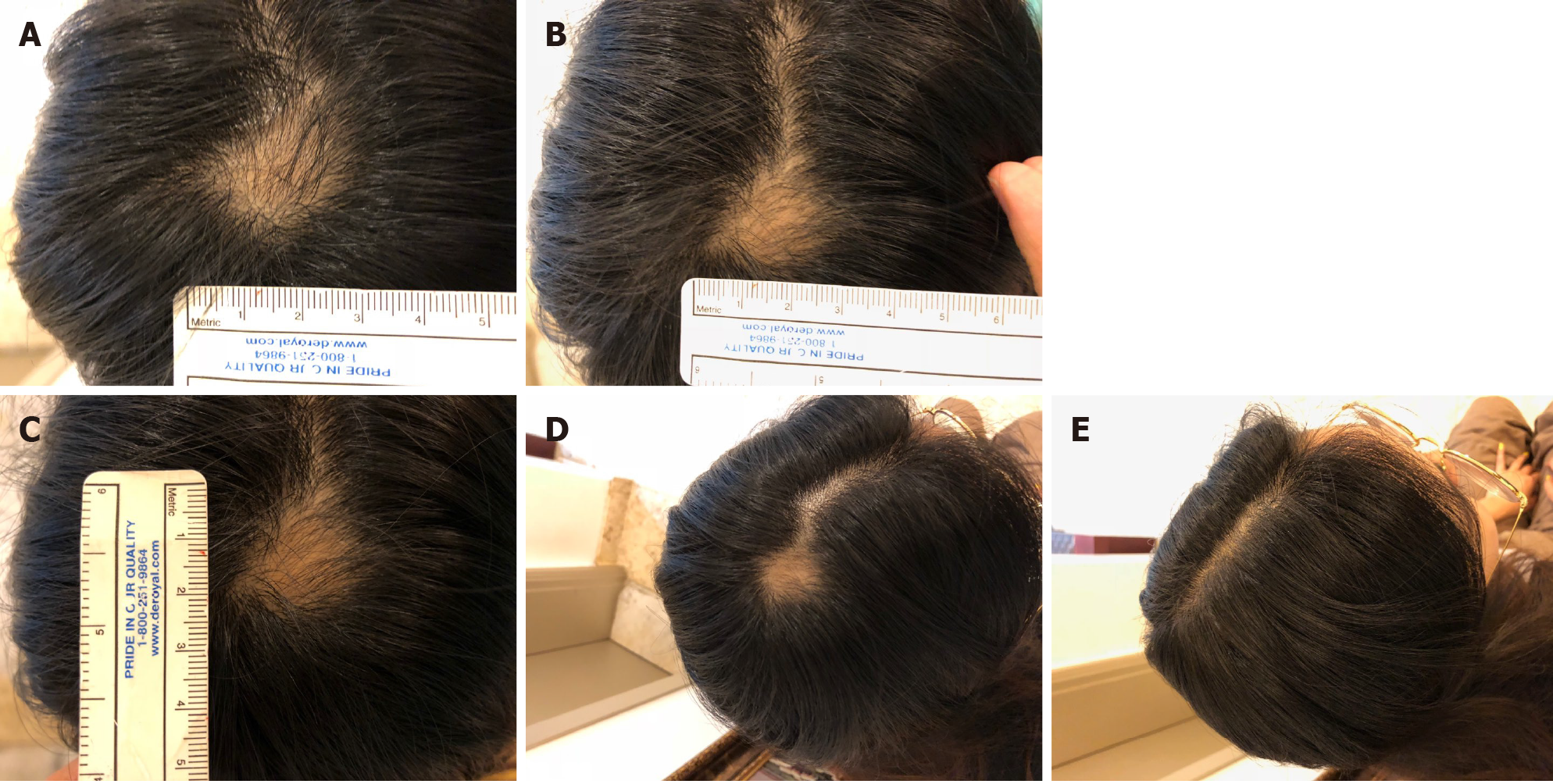 The patient’s hair began to grow after approximately 3 mo after the first transplant (Figure 5). Three months after the final transplantation, the patient stopped wearing a wig. The condition was maintained at the 1-year follow-up (data not shown).

AA is a well-known autoimmune disease that can have a devastating impact on a patient’s quality of life[5,8]. Currently, various drug treatments have been attempted. However, they only slowed down the progression of the disease, with limited benefit to the patient[5-7]. Hair transplantation has little effect in cases of diffuse AA, AT, or AU. Therefore, new treatment strategies for AA and related diseases are needed. Various studies have been attempted for the treatment of AA. Among them is the use of MSCs, which has had remarkable success[18,25,26]. MSCs are efficacious in the treatment of autoimmune diseases because they have anti-inflammatory and immunomodulatory properties[21-23]. In addition, MSC treatment is suitable as a new alternative treatment method for AA because MSCs promote hair growth and strengthen the hair[18]. Minimally manipulated MSCs are known to preserve the characteristics of MSCs compared to cultured MSCs[29,30,38,39]. Based on these results, we transplanted MM-UC-MSCs to treat AA in 2 patients and AU in 1 patient.

In the cases of 1 and 2, it was observed that AA was cured, and no recurrence was observed for more than 1 year. It was confirmed that transplanting MM-UC-MSCs has high efficacy in the treatment of AA. Interestingly, case 1 had no visible change in the lesion sites for about 3 mo, while case 2 had a noticeable visible change after the first transplantation. We hypothesize that the treatment of case 2 with local steroid hormone injections for a year prior to transplantation resulted in a synergistic effect that shortened the time for the MSCs to engraft and exert their immune function to regrow the hair.

In the case of case 3, the hair grew on the scalp at levels similar to normal, and she reported no recurrence until 1 year after treatment. We relied on the patients to submit their follow-up pictures. Unfortunately, we have no other images from case 3 after day 226. Based on the result of this case, it was confirmed that transplanting MM-UC-MSCs has high efficacy for the treatment of AU as well. Interestingly, case 3, like case 1, did not see hair growth immediately after the first transplant. Hair regrowth was observed after approximately 3 mo (similar to case 1). This supports our hypothesis that prior steroid treatment can enhance the engraftment and functionality of the MM-UC-MSCs. Without the steroid use, we hypothesize that it will take about 3 mo for the MM-UC-MSCs to engraft and exert effects on the immune system. Further studies are needed to prove this hypothesis.

MM-UC-MSCs are expected to be a safer agent than cultured MSCs, embryonic stem cells, and induced pluripotent stem cells in vivo because minimally manipulated MSCs have little tumorigenicity, genetic mutations, and aging-related modifications[33,36,37]. As expected, we did not observe any immune rejection despite the allogeneic transplantation because MSCs have immunomodulatory properties[21,22]. Therefore, the patients did not receive any immunosuppressant drugs during treatment. No side effects related to dermatitis and transplantation of MSCs were observed or reported by the patients during treatment or the follow-up period.

Based on our results, MM-UC-MSC transplantation was safe and effective to treat AA and AU. Further studies should be conducted to confirm the safety and effectiveness of this treatment before adopting this approach to treat a greater number of patients with AA and related diseases.

The therapeutic effect of MM-UC-MSCs on AA and related diseases is very high as shown in the patients presented here. Recurrence of AA and AU and side effects did not occur during the treatment and follow-up duration of at least 1 year. Based on these results, we expect that MM-UC-MSC transplantation will be a safe and efficient alternative for the treatment of AA, AT, and AU. However, it is necessary to conduct clinical trials with a greater number of patients.