Neoadjuvant treatment has become a standard of care for borderline or locally advanced pancreatic cancer and is increasingly considered even for up-front resectable disease. The aim of this article is to present the case of a 62-year-old patient with locally advanced pancreatic adenocarcinoma who was successfully treated with gemcitabine plus nab-paclitaxel after the failure of the first line treatment.

Computerized tomography scan and magnetic resonance imaging demonstrated a nodular lesion of ill-defined limits in the body of the pancreas, measuring approximately 4.2 cm × 2.7 cm, with an infiltrative aspect. The tumor had contact with the superior mesenteric vein, splenomesenteric junction and the proximal segment of the splenic artery, causing focal reduction of its lumens. Due to vascular involvement, neoadjuvant chemotherapy treatment with eight cycles of “folinic acid, 5-fluorouracil, irinotecan and oxaliplatine” (FOLFIRINOX) were performed. At the end of the cycles, surgery was performed, but the procedure was interrupted due to finding of lesions suspected of metastasis. Gemcitabine plus nab-paclitaxel was then successfully used for neoadjuvant treatment with subsequent R0 surgical resection.

Gemcitabine plus nab-paclitaxel may be effective as an alternative regimen when FOLFIRINOX fails as the first line of treatment, suggesting the need for further studies to identify which patients would benefit from each type of therapeutic approach.

Core Tip: Neoadjuvant treatment with folinic acid, 5-fluorouracil, irinotecan and oxaliplatine or gemcitabine plus nab-paclitaxel has become a standard of care for borderline or locally advanced pancreatic cancer and is increasingly considered even for up-front resectable disease.

Pancreatic cancer is among the most aggressive solid tumors, representing the fourth most common cause of death by cancer in both sexes worldwide[1]. In Brazil, it corresponds to the seventh and fourth cause of death from cancer in men and women, respectively[2]. Among pancreatic tumors, adenocarcinoma is the most common (85%), followed by neuroendocrine tumors (5%). The 5-year overall survival is 5%, but it becomes 2% in the case of metastatic disease. Those low survival rates are partially due to the late diagnosis of this disease. Indeed, 80% of pancreatic cancers are diagnosed at locally advanced or metastatic stages. Therefore, only 20% of cases can be treated definitively by a multimodality treatment[3].

Neoadjuvant treatment with “folinic acid, 5-fluorouracil, irinotecan and oxaliplatine” (FOLFIRINOX) or gemcitabine plus nab-paclitaxel has become a standard of care for borderline or locally advanced pancreatic cancer and is increasingly considered even for up-front resectable disease[4].

The aim of this article is to present the case of a 62-year-old patient with locally advanced pancreatic adenocarcinoma who was successfully treated with gemcitabine plus nab-paclitaxel after the failure of FOLFIRINOX as the first line of neoadjuvant treatment.

A 62-year-old female patient presented at a medical consultation with epigastric pain.

The patient presented with 30 d of epigastric pain with no improvement with the administration of a proton pump inhibitor.

No history of relevant past illness

In her personal history, she had non-insulin dependent type 2 diabetes mellitus and dyslipidemia

No significant findings in physical examination.

In computerized tomography (CT) scan and magnetic resonance imaging (MRI) the pancreas had preserved dimensions, with emphasis on a nodular lesion of ill-defined limits in the body of the pancreas, measuring approximately 4.2 cm × 2.7 cm, with an infiltrative aspect. The tumor had contact with the superior mesenteric vein, splenomesenteric junction and the proximal segment of the splenic artery, causing focal reduction of its lumens. On the other hand, no contact was seen with the portal vein, superior mesenteric artery and the celiac trunk and its branches. Peripancreatic lymph nodes were prominent in number, less than 1.0 cm (Figure 1).

Figure 1 Nodular lesion in the body of the pancreas (4.2 cm × 2.7 cm) with an infiltrative aspect.
FINAL DIAGNOSIS

The final diagnosis of the presented case is pancreatic adenocarcinoma.

The CT scan of the abdomen performed 4 mo after the start of chemotherapy treatment showed a reduction in size, presenting dimensions of 3.0 cm × 2.6 cm. Contact with the superior mesenteric vein, splenomesenteric junction and proximal segment of the splenic artery persisted, causing the reduction of the lumen of these vessels. The visible peripancreatic lymph nodes remained numerous but still smaller than 1 cm.

At the end of the cycles, surgery was performed to remove the tumor, given the absence of metastases detectable by imaging tests and the reduction of its size. During surgery, lesions suspected of metastasis in segments III and IV of the liver were observed, and a frozen section was performed that revealed infiltration by adenocarcinoma only of the segment III lesion, 1.5 cm in its longest axis. The procedure was interrupted without the removal of the pancreatic tumor.

Positron emission tomography/CT examination performed after an attempt to remove the tumor revealed hyperconcentration of radiopharmaceuticals in hepatic, celiac and hilar lymph nodes together with the emergence of the superior mesenteric artery, suspected of secondary neoplastic involvement. The hyperconcentration of the radiopharmaceutical in hepatic pericapsular regions of segments III, IVB and VI/VII and in muscle-adipose planes of the anterior abdominal wall suggested a probable occurrence of a post-surgical inflammatory process in these areas.

Chemotherapy treatment was restarted in four cycles of gemcitabine 1000 mg/m² (days 1, 8 and 15, for 30 min) plus nab-paclitaxel 125 mg/m² (days 1, 8 and 15, for 30 minutes) every 28 d. After the chemotherapy treatment, positron emission tomography/CT examination found a reduction in the glycolytic metabolism of the pancreatic tumor but with maintenance of its dimensions. No significant radiopharmaceutical concentration was detected in hepatic, celiac and superior mesenteric artery lymph nodes. The reduction of the radiopharmaceutical concentration in the hepatic and abdominal pericapsular regions previously mentioned corroborated the hypothesis of the presence of a post-surgical inflammatory process.

The gastroduodenopancreatectomy was performed 10 d after the last session of gemcitabine plus nab-paclitaxel with complete removal of the pancreatic lesion and hospital discharge on the 6th postoperative day. Anatomopathological examination revealed the absence of invasive neoplasia, presenting only foci of intraepithelial neoplasia with low-grade dysplasia and free margins. The dissected regional lymph nodes were free of neoplasia (ypT0 ypN0/15).

So far, 18 mo since the last surgery, there has been no tumor recurrence or late postoperative complications (Figure 2). 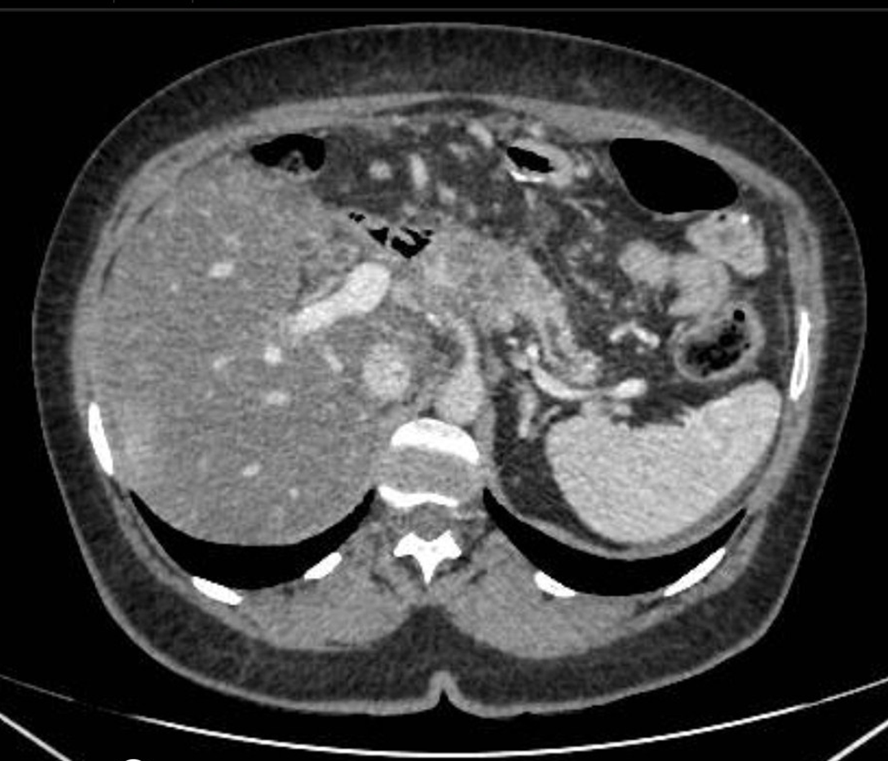 The incidence of pancreatic ductal adenocarcinoma is higher in men and in developed countries, for reasons that are not completely understood, but probably related to behavioral factors and greater longevity in these regions[5]. When diagnosing adenocarcinoma, CT scan and MRI is highly sensitive (96% and 93.5%, respectively), with CT scan being the most appropriate for assessing tumor resectability[6]. Currently, there is no established screening method for this type of cancer, which decreases the chances of early detection and increases the mortality rates of victims in developed and developing countries, since most tumors are shown to be unresectable[7,8].

Pancreatic ductal adenocarcinoma is an aggressive tumor associated with low rates of resectability at diagnosis (15%-20%)[9] and unfavorable prognosis, being considered a systemic disease even without evidence of metastases by imaging. Its staging is done through the Tumor, Node, Metastasis system of the American Joint Committee on Cancer, and with the use of imaging tests (CT and MRI) it can be classified as resectable, borderline, locally advanced and metastatic depending on its involvement with neighboring vascular structures[5].

In borderline and locally advanced pancreatic tumors (30%-40% of pancreatic tumors)[10], neoadjuvant chemotherapy has been considered a viable option to downstaging tumor, maximizing the potential for an R0 resection, treating micrometastatic disease early and increasing overall survival, since the only possible curative treatment of the disease involves tumor resection with negative margins[11-13]. Retrospective data suggest that neoadjuvant treatment may lead to results that are superior to those with a upfront surgery for pancreatic adenocarcinoma. Prospective, randomized trials ought to evaluate this further.

In the reported case, we had a borderline pancreatic tumor due to partial occlusion of the lumen of the superior mesenteric vein[14]. The normality of the tested markers, correlated to imaging tests, suggested the absence of a systemically advanced disease and good chances of resectability[15,16], mainly in association with neoadjuvant treatment. However, liver metastasis was not found on imaging, being detected only at the time of surgery. Such a peculiarity is in line with the literature regarding the establishment of magnetic resonance imaging as the gold standard for the detection of liver metastases greater than 3 mm, since the method presents high sensitivity (91%-97%) when compared to others, such as CT scan (71%-73.5%)[17]. Thus, it is possible that liver metastasis developed during chemotherapy, which indicates a possible failure of treatment with FOLFIRINOX.

Despite being considered equivalent to gemcitabine plus nab-paclitaxel as a first-line choice in guidelines of the National Comprehensive Cancer Network and American Society of Clinical Oncology, the FOLFIRINOX regimen has been chosen as the first treatment option in patients with good performance due to its greater response and evidence of increased survival[18-19]. In view of the failure of FOLFIRINOX, there is little evidence regarding the efficacy of gemcitabine plus nab-paclitaxel as a subsequent treatment in borderline or locally advanced pancreatic tumors, with Vreeland et al[20] identifying the benefit of the exchange mainly when done before the disease becomes metastatic. In this case, the switching of the schemes resulted in success, without the appearance of other liver metastases and with complete remission of the tumor as demonstrated in the anatomopathological examination, suggesting that gemcitabine plus nab-paclitaxel may be a good choice in the face of FOLFIRINOX failure, presenting a surprising result, rarely commented in the literature.

There is no doubt that pancreatic cancer patients need more tailored perioperative therapy than is currently available. Multimodal therapy for pancreatic cancer has never been more challenging in theory and practice than it is today.

There is still little evidence on the best chemotherapy choice for treating borderline and locally advanced pancreatic tumors. The reported case demonstrates that gemcitabine plus nab-paclitaxel may be effective when FOLFIRINOX fails as the first line of treatment, suggesting the need for further studies to identify which patients would benefit from each type of therapeutic approach.

The authors are thankful to Axel-Berg J for English corrections.