An 82-year-old man had experienced abdominal pain and fever with chills 1 d before his presentation. A computed tomography scan of the abdomen demonstrated dilatation of the common bile duct approximately 2.2 cm in width. Gas retention was found in his intrahepatic ducts. Acute cholangitis with pneumobilia was identified, and he was hospitalized. Esophagogastroduo-denoscopy and endoscopic retrograde cholangiopancreatography disclosed no ampulla of Vater in the second portion of the duodenum. Moreover, a capsule-like foreign body (pharmaceutical desiccant) approximately 1 cm × 2 cm in size was found at the gastric antrum and peri-pyloric region. After the foreign body was removed, one orifice presented over the pyloric ring in the stomach, a suspected ectopic ampulla of Vater. Subsequently, sludge in the common bile duct was cleaned, and balloon dilatation was performed. The general condition improved daily. The patient was discharged in a stable condition and followed in our outpatient department.

This case involved an ampulla of Vater in an unusual location. Endoscopic retrograde cholangiopancreatography with balloon dilatation is the main treatment recommended and performed.

The ampulla of Vater is an opening at the confluence of the common bile duct and pancreatic duct. It is located in the second portion of the duodenum and is surrounded by the sphincter of Oddi. Anomalous termination of the common bile duct, known as ectopic papilla of Vater, is predominant in men, though uncommon and potentially related to abnormal embryogenetic formation. The reported incidence of anomalous termination of bile duct termination is approximately 5.6% to 23.0%[1]. The incidence can be underestimated because of the limited number of cases, and the condition remains undetected until symptoms present. Increases in incidence and in prevalence may be due to the increasingly common use of endoscopic retrograde cholangiopan-creatography (ERCP). Potential locations for ectopic papilla are the stomach, pyloric canal, duodenal bulb, and the third or fourth portion of the duodenum[2]. In most cases, it remains undetected until symptoms present. Complications such as pancreatitis, biliary tract infection, and hyperamylasemia are mild and may be alleviated by conventional therapies[3]. Thus, we report the case of a man with an ectopic ampulla of Vater in the pylorus.

An 82-year-old man experienced abdominal pain and fever with chills 1 d before his presentation.

The severity of these symptoms increased gradually. Nausea and vomiting were also subsequently noted.

The patient had a history of hypertension. The patient underwent surgical repair due to bowel perforation and laparoscopic cholecystectomy due to cholecystitis.

There was no significant personal or family history.

The patient’s temperature was 38.6 °C, his heart rate was 101 bpm, his respiratory rate was 22 breaths per minute, and his blood pressure was 112/84 mmHg. Yellow skin discoloration and tenderness over the upper abdominal region were noted.

Computed tomography of the abdomen demonstrated dilatation of the common bile duct measuring approximately 2.2 cm. Gas retention was present in the intrahepatic ducts (Figure 1). Cholangitis with pneumobilia was suggested. 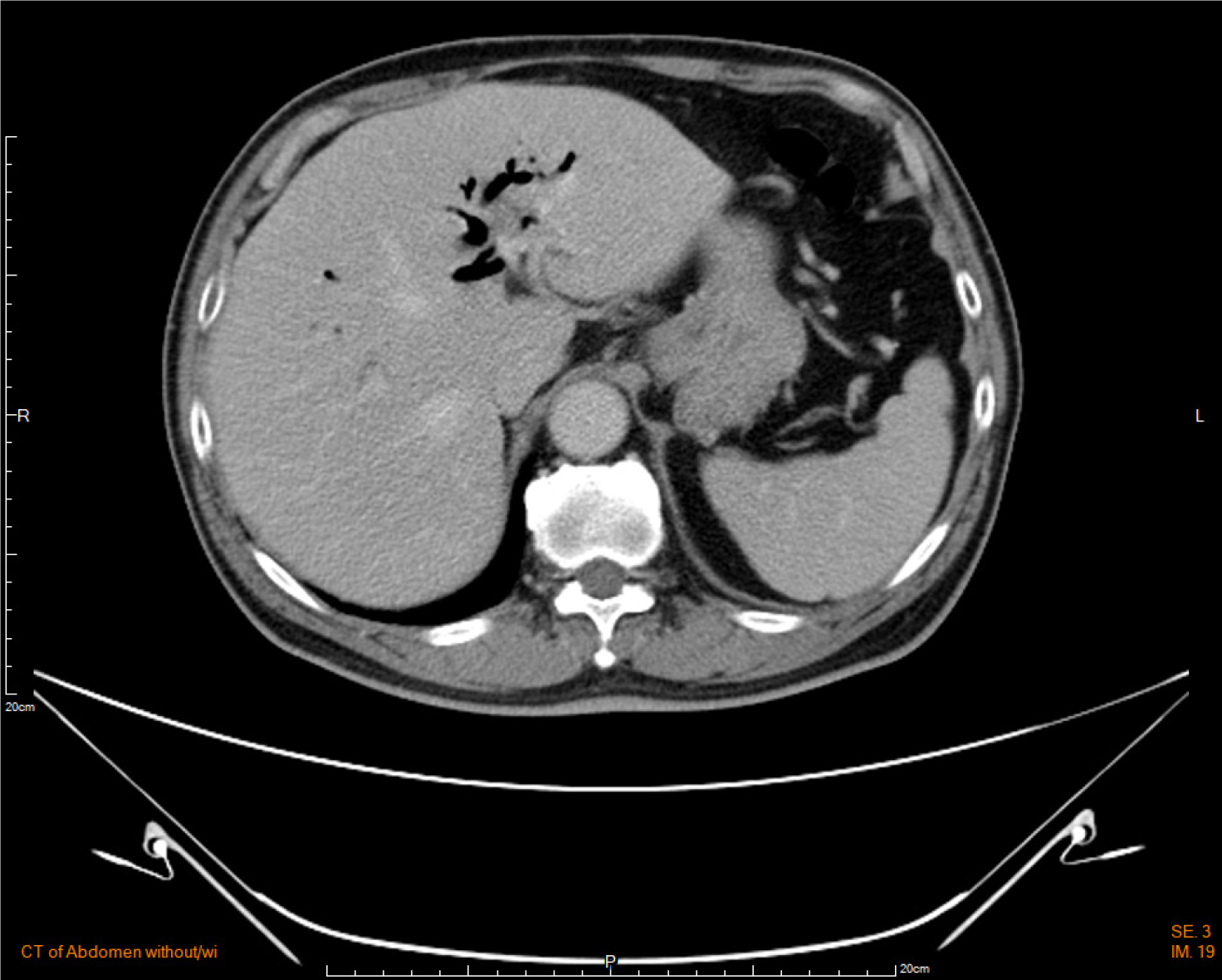 The patient underwent percutaneous transhepatic cholangiography and drainage and collection of bile for culture. We also performed esophagogastroduodenoscopy and ERCP, which disclosed a gastric ulcer over the antrum and pylorus stenosis with partial gastric outlet obstruction. However, the ampulla of Vater was not located in the second portion of the duodenum. Moreover, a capsule-like foreign body (pharmaceutical desiccant) measuring approximately 1 cm × 2 cm was present at the gastric antrum and the peri-pylorus region (Figure 2). We removed the foreign body and found one orifice over the pyloric ring in the stomach, suggesting ectopic ampulla of Vater (Figure 3). A catheter was inserted through the endoscope to the ectopic orifice at the pyloric ring. Sludge was noted in the common bile duct. Balloon dilatation was therefore performed. Cholangiography demonstrated a dilated common bile duct (Figure 4). Magnetic resonance images demonstrated a dilated common bile duct drained into the pylorus (Figure 5). 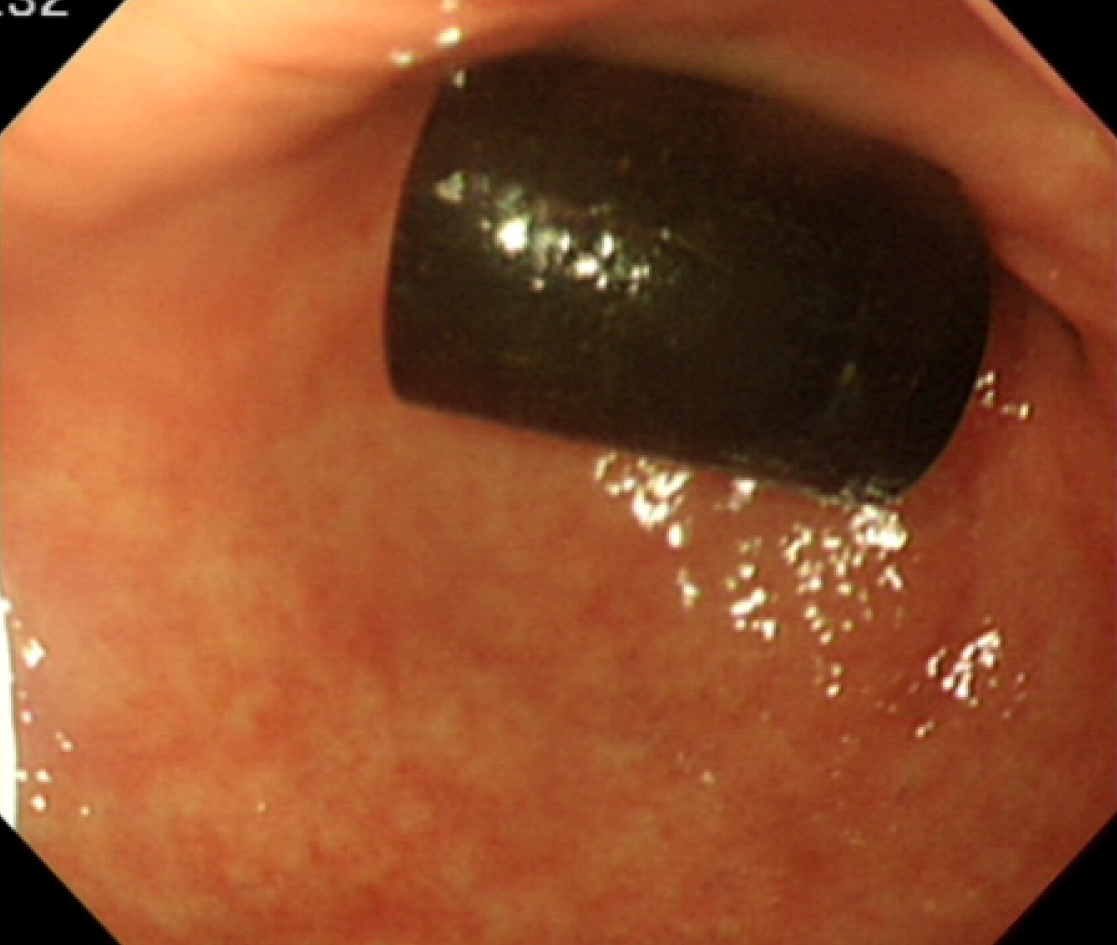 Figure 2 There was a capsule-like foreign body approximately 1 cm × 2 cm in size at the gastric antrum and peri-pyloric region. 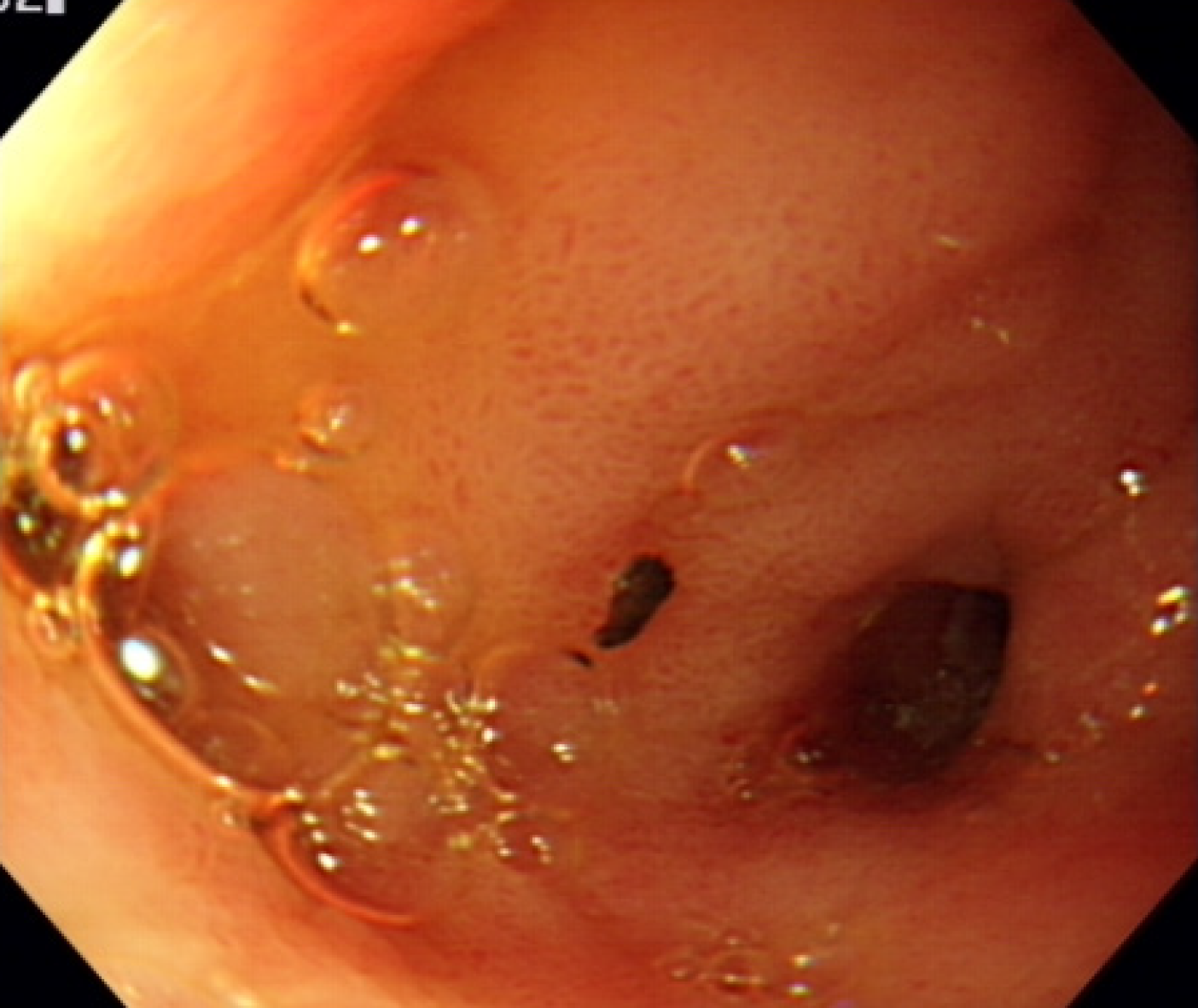 Figure 3 Orifice present over the pyloric ring in stomach noted after removal of a foreign body. An ectopic ampulla of Vater was suspected. 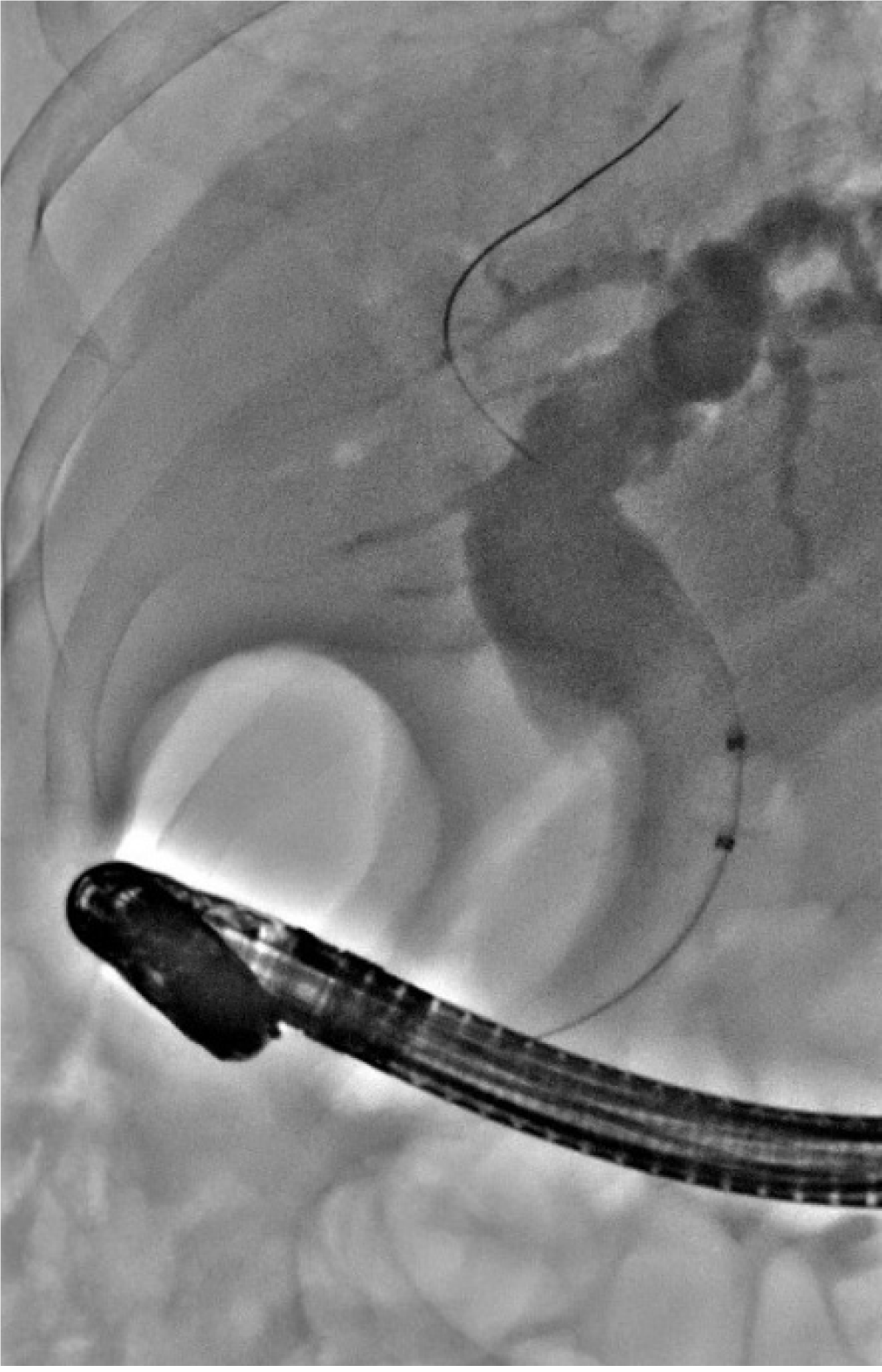 Figure 4 Cholangiography. The wire-guided catheter was inserted through the endoscope into the ectopic orifice at the pyloric ring.

The final diagnosis of the presented case was acute cholangitis with an ectopic ampulla of Vater.

Initially, we prescribed ceftriaxone (2 g IV QD) as an empirical antibiotic. After percutaneous transhepatic cholangiography and drainage, epigastric pain improved. Nevertheless, high fever was persistent, and we therefore consulted an infectologist and shifted the antibiotic treatment to Doripenam (250 mg IV Q8H) and vancomycin (1 g IV Q12H). These antibiotics were effective for all bile cultures. Because obstruction of the common bile duct was resolved and antibiotics were effective according to bile culture results, the patient’s fever gradually subsided, and sepsis was brought under control.

The patient’s general condition improved daily. He was discharged in a stable condition and follow-ups continued in our outpatient department. We also educated the patient about lifestyle modification and avoidance of the supine position immediately after meals or eating before sleep. After doing so, there was no recurrent cholangitis.

Ectopic papilla of Vater is an underdiagnosed disease, and anomalous termination in the stomach is rare[2,4]. A retrospective study with 6133 enrollees who had received ERCP in Taiwan between 1988 and 2010 reported an incidence of approximately 0.13%, corresponding to the prevalence rate of Taiwan’s general population[2].

The presenting clinical symptoms include epigastric abdominal pain, dyspepsia, nausea, vomiting, fever, and jaundice. These may be associated with the absence of a sphincter, which allows the passage of gastroduodenal contents into the main bile duct, potentially causing biliary obstruction and even cholangitis[4]. In our case, reducing gastric contents or volume decreased the possibility for debris refluxing into the common bile duct. In addition, prokinetic drugs could be helpful by increasing the motility of the stomach and accelerating gastric emptying. Those might be beneficial to prevent recurrent cholangitis[6].

The pathogenesis of ectopic papilla associated malignancy is unclear. Only one case report is available of periampullary carcinoma with an ectopic ending of the ampulla of Vater in the fourth part of the duodenum[7].

Diagnosis is dependent on the observation of the orifice location and duct through radiographic visualization with contrast medium[2,8]. Recognizing an ectopic papilla of Vater and ruling out fistulas, which may be secondary to ulcer diseases or choledocho-lithiasis, spontaneous or iatrogenic surgical fistulas, or surgical choledochoenteric diversions are also crucial[9].

Currently, an ectopic papilla of Vater can be detected through various methods, such as percutaneous transhepatic cholangiography, upper gastrointestinal endoscopy, ERCP, magnetic resonance cholangiopancreatography, and barium meals[10]. In particular, ERCP is a putatively effective procedure with efficacy and safety, although anatomical alteration increases the difficulty of intervention and the risk of complications; that is, ERCP operators may be unable to establish the location of the ectopic orifice of papilla. Infrequent complications related to ERCP include pancreatitis, bleeding, perforation, biliary tract infection, and hyperamylasemia. A hook-shaped configuration may sometimes be visible with cholaniography, but this cannot be considered a reliable criterion. The reason for this is that the configuration may dynamically alter according to a patient’s position[2]. Balloon dilatation is the main treatment recommended and performed. Surgery is the last resort in cases when endoscopic treatment is ineffective.