Floating elbow along with ipsilateral multiple segmental forearm fracture is a rare and high-energy injury, although elbow dislocation or fracture of the ulna and radius may occur separately.

We report the case of a 37-year-old woman with open (IIIA) fracture of the right distal humerus with multiple shaft fractures of the ipsilateral radius and ulna with a history of falling from a height of almost 20 m from a balcony. After providing advanced trauma life support, damage control surgery was performed to debride the arm wound and temporarily stabilize the right upper limb with external fixators in the emergency operating room. Subsequently, one-stage internal fixation of multiple fractures was performed with normal values of biochemical indicators and reduction in limb swelling. The patient achieved good outcome at the 7 mo follow-up.

One- or two-stage treatment must be performed according to the type of injury; we efficiently used the “damage control principle.”

Core Tip: A 37-year-old woman was admitted to our hospital due to polytrauma. Initial emergency examinations showed open (IIIA) fracture of the distal right humerus; closed right olecranal fracture; multiple segment (shaft and distal) fracture of the radius and ulna. To date, the acknowledged guideline of “floating elbow” is still controversial, but the “damage control principle” was efficiently used for first aid and further treatment, and further research is needed.

Floating elbow injury is a rare fracture pattern with reported incidence of approximately 2%-13% in both children and adults[1-4] according to the different patterns of patients. Recently, the definition of “floating elbow” is not isolated only to ipsilateral diaphyseal fracture of the humerus and forearm, and there are some case reports and series in which combinations of either extra-articular or intra-articular distal humerus fractures and proximal ulna fracture or fracture dislocations were described as floating elbow although these are mainly referred as “variants”[3,5,6]. This case report illustrates the surgical treatment and outcome of a variant floating elbow: Open humerus fracture combined with multiple segmental forearm fractures.

A 37-year-old female was admitted to our hospital with polytrauma.

The patient had experienced trauma due to a fall from a height of approximately 20 m.

She had no genetic or familial disease history, such as hypertension or diabetes.

Initial emergency examinations showed open (IIIA) fracture of the distal right humerus; closed right olecranon fracture; multiple segment (shaft and distal) fracture of the radius and ulna; lung contusions; fracture of the pubic rami (right); mild traumatic brain concussion; and skin contusion (approximately 100 cm × 50 cm) in the right lower back and buttocks (Figure 1). The clinical orthopedic examination revealed deformity of the right upper limb with a bleeding elbow and the Pelvic compression test was positive. The skin of the right elbow was poor with edema and about 10 cm × 10 cm of skin contusion, and the bone could be seen outside. The patient could move her fingers and toes without numbness. The Visual Analog Scale for Pain was 9 points[2,3].

The final diagnosis of the presented case was open (IIIA) fracture of the distal right humerus; closed right olecranon fracture; multiple segment (shaft and distal) fracture of the radius and ulna; lung contusions; fracture of the pubic rami (right); mild traumatic brain concussion; and skin contusion (approximately 100 cm × 50 cm) in the right lower back and buttocks.

The Injury Severity Score[7] was 17. There were no nerves or vascular injuries to the four limbs. As the patient was hemodynamically unstable with blood pressure of 95/70 mmHg, she required blood products (red cell suspension liquid 2 units, plasma 200 mL) according to the advanced trauma life support protocol[8] and was managed based on the principles of damage control surgery and temporarily stabilized with external fixators in the emergency operating room[9] (Figures 2-4). The right open elbow fracture was debrided, the fracture of the humerus broke through the skin, and a partial bone defect was found and irrigated with 3 L of saline. Moreover, the wound was loosely-bound up. The patient was then admitted to the intensive care unit, and resuscitation continued. 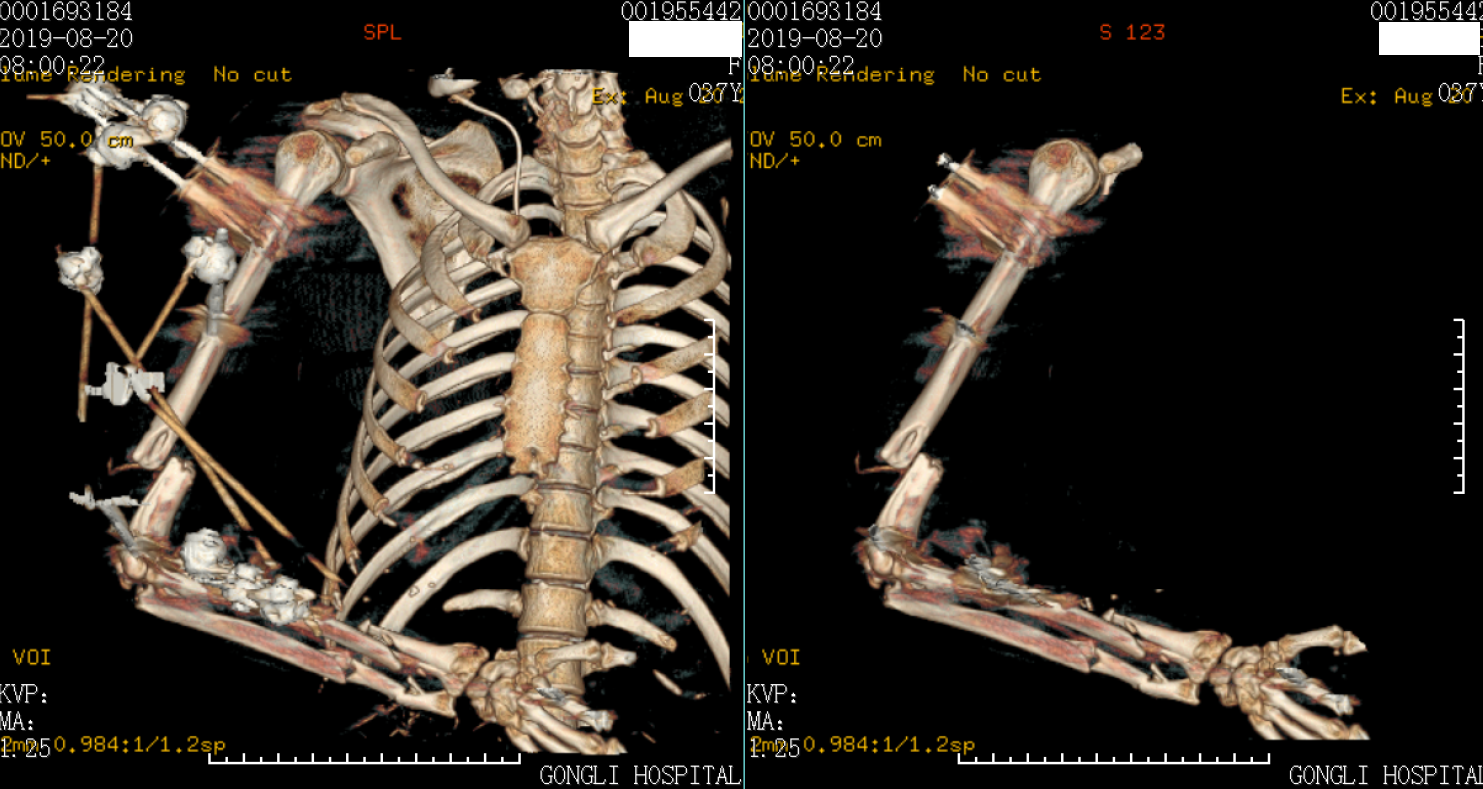 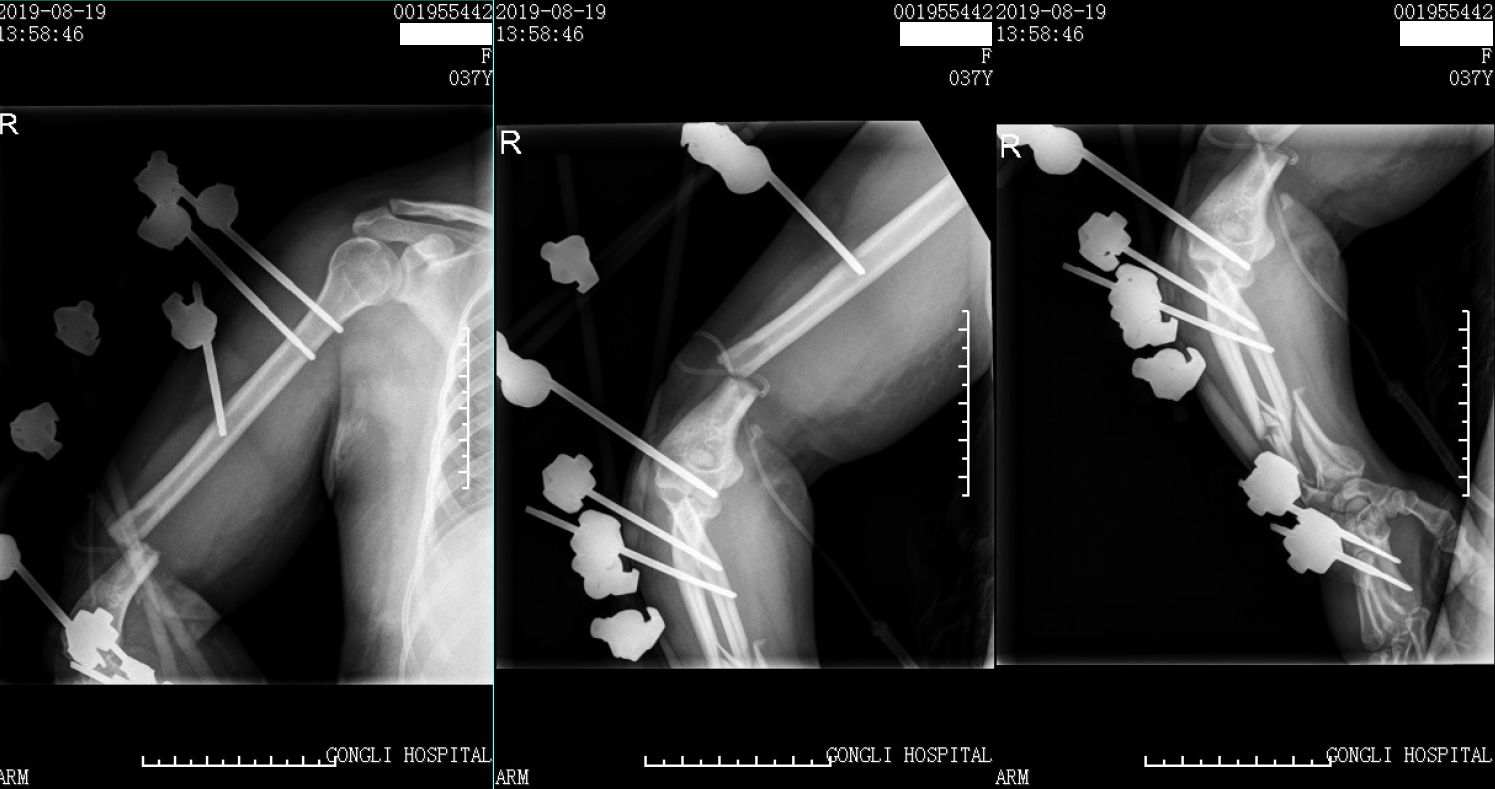 Figure 3 X-ray images of the patient with external fixators. 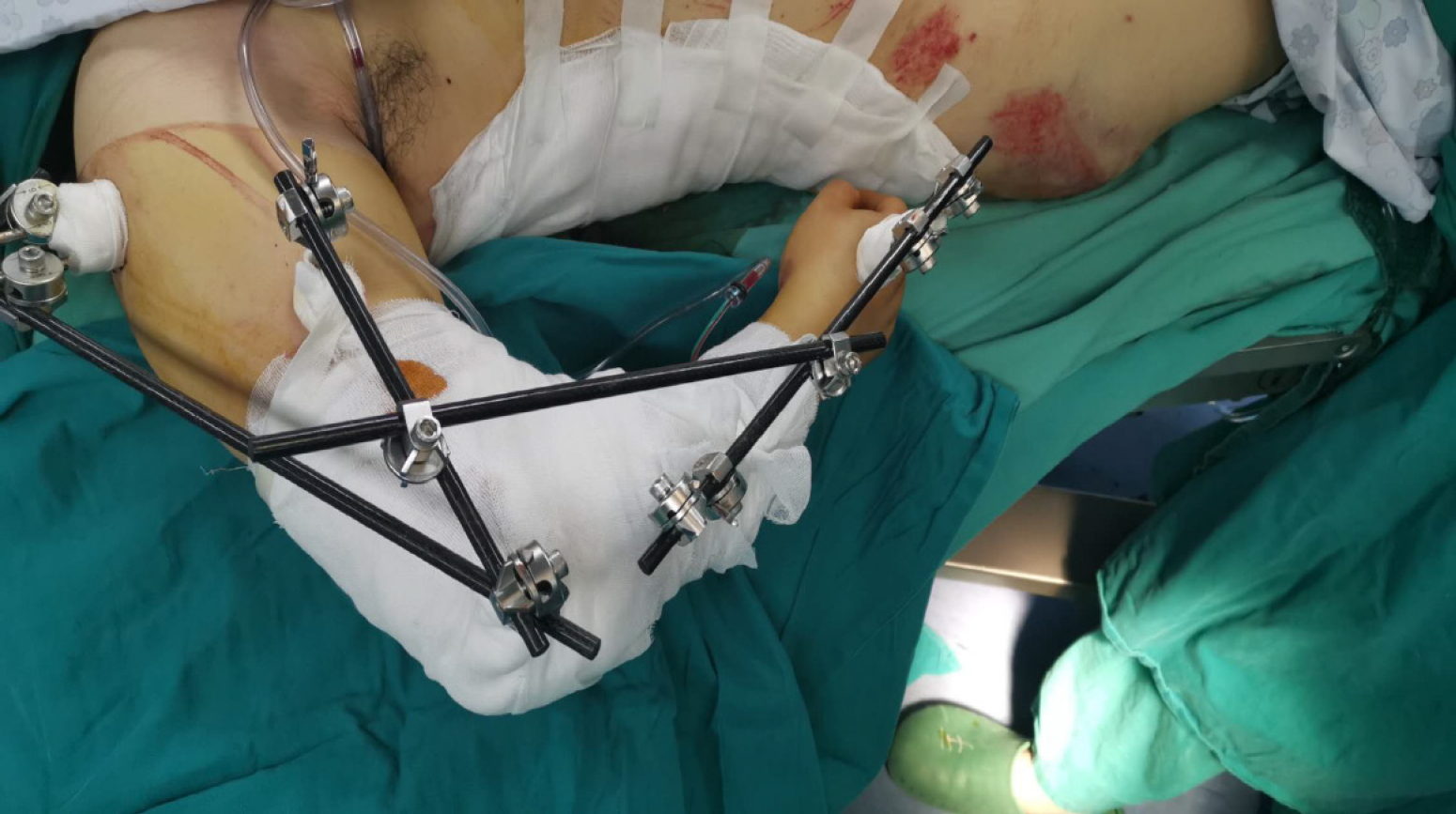 Figure 4 Image of the patient after the first emergency operation.

The next day, she returned to the normal ward, and 18 d after trauma, the right upper limb was reconstructed by movement of the external fixators and open reduction fixations by multiple plates with normal routine blood and CRP levels. Considering the measurement between the physiological state of the young patient and complexity of the right arm injury (extra-articular elbow fracture with bone defect), it was decided to perform one-stage internal fixation. First, with the patient in the supine position, an anterior approach to the humerus and posterior approach to the olecranon were performed. Then the radius was fixed initially to obtain a bridge plate between several segments with the volar approach. Subsequently, the ulna was exposed in the dorsal approach, and osteosynthesis with an anatomical plate was performed after reduction. Finally, the posterior elbow was debrided by removing the necrotic tissue with four drainage tubes. After 1 wk, there were no signs of compartment syndrome and the patient was physiologically stable.

Two weeks postoperatively, the patient’s arm wound healed well, and excellent satisfaction was achieved at the 7 mo follow-up. During functional evaluation, the Mayo Elbow Performance Score[10] was 75 and Disabilities of the Arm, Shoulder and Hand score[11] was 38.3 (Figures 5 and 6).

Figure 5 X-ray images of the patient at the 7 mo follow-up.

Figure 6 Movements of the patient at the 7 mo follow-up.
DISCUSSION

The term “floating elbow” was first used by Stanitski and Micheli in 1980 to describe humerus fracture accompanying ipsilateral forearm fractures. Most floating elbow injuries result from high-velocity or high-energy trauma, such as motor or vehicle accidents and fall from height. Neurovascular injury, open fractures, and multiple injuries are the most common concomitant traumas.

Ditsios et al[12] proposed an easily understood classification of “floating elbow,” which was divided into four types, and Jiménez-Díaz et al[13] retrospectively analyzed 23 cases from 2004 to 2013 applying the abovementioned classification method. However, this classification did not include the type of case that we reported. Therefore, our case can also be considered as a “variant” type of “floating elbow” or “floating forearm,” which was an extremely rare injury pattern, including typically simultaneous perilunate injury and elbow dislocation.

To date, the mechanism of injury of “floating elbow” is unclear. Kose et al[14] have postulated elbow dislocation with forearm fractures to be two staged in which initial elbow dislocation resulting from a fall on the outstretched hand was followed by fractures of the bones of the forearm while the elbow was still in extension, the forearm in hyperpronation, and the wrist in radial deviation. However, with the fracture manifestations in our case, the injury mechanism might be totally different, and we inferred that the upper limb seemed to have been subjected to a combination of two forces: One vertical stress on the wrist resulting in comminuted fractures of the distal radius and ulna and the other stress on the olecranon fulcrum of the ulna causing humerus open fracture. The former definitions assumed that there is only one state, extension or flexion, of the injured limb and ignored the fact that limb position could change with high-energy or high-velocity traumatic force.

To date, the acknowledged guideline of “floating elbow” is still controversial, but damage control theory was widely used to deal with multiple traumas in this injury by stages. The ideal treatment of “floating elbow” is to perform open reduction accurately, followed by solid internal fixation and postoperative functional exercise painlessly as soon as possible. However, clinically, these types of conditions were often accompanied by multiple system trauma; therefore, the “damage control principle” was used as a result of dealing with the injured limbs at the second place. Since internal fixation had one or two stages, it is not a gold standard. In our case, the patient was a middle-young woman with good health, so we selected a one-step operation to remove the external fixator and fix fracture by plates without bone graft due to the risk of infection.

This patient had an open fracture of the elbow and developed a skin defect and necrosis that resulted in the adhesion of part of the elbow joint; fortunately, she did not develop infection. According to literature reports, the prognosis of floating elbow had various adverse complications, including limited flexion and extension of the elbow and wrist, ectopic ossification, limited rotation of the forearm, and spontaneous fusion between the ulnar and radial bones. Considering possible causes, “floating elbow” usually involved the structures of the upper arm and forearm, meanwhile, the radius and ulna have the rotation function of the forearm, so simultaneous damage to these bone structures would inevitably affect the motor function of the entire upper limb. Likewise, the asynchrony of functional recovery in various parts was also the cause of poor function of such injuries.

A floating elbow combined with ipsilateral distal multiple segmental forearm fracture is rare and an associated injury with a complex mechanism. An emergency physician should pay more attention to this type of injury and choose a suitable stage treatment because there is no standard guideline for this type of trauma; however, the “damage control principle” was efficiently used for first aid and further treatment, and further research is needed. The present case adds to our knowledge and awareness of combined injuries of the upper limbs.

The authors would like to thank the patient for providing consent for publication of this case report and accompanying images.