The metastasis of liver cancer to skeletal muscle is extremely rare compared to other sites. We herein report a case of rapidly developing skeletal metastases following liver transplantation due to primary liver cancer.

A 70-year-old male with underlying chronic hepatitis B virus infection was diagnosed with hepatocellular carcinoma (HCC), for which he underwent liver transplantation in 2014. Six years after receiving the transplant, pathological examination confirmed the presence of HCC without vascular invasion. He was admitted to the hospital with a rapidly growing mass on his right thigh. Ultrasound examination revealed a mixed echo mass in the lateral soft tissue of the middle part of the right femur. Magnetic resonance imaging showed heterogeneous iso-signal intensity on T1-weighted images and heterogeneous hyper-intensity on T2-weighted images compared to the surrounding muscles. Pathological examination of the ultrasound-guided needle biopsy specimen revealed that it was similar to the previously detected liver cancer; the diagnosis was metastasis of HCC. Surgical excision was performed. There were no other sites of metastasis, and the patient recovered well after surgery.

This report presents a rare case of skeletal metastasis following liver transplantation for HCC. The study suggests a possible role for skeletal muscle metastasis mechanisms, which should be the focus of future research.

More than half a million new cases of hepatocellular carcinoma (HCC) are diagnosed annually worldwide. In China, HCC is the fourth most common cancer in males after pulmonary, stomach, and esophagus cancers, and the sixth most common in females[1]. Extrahepatic HCC can occur in one of three ways: direct extension, hematogenous spread, or lymphatic invasion. Rupture of HCC may result in intraperitoneal implantation of tumor cells on peritoneal or omental surfaces. Reported HCC metastatic sites include lungs, lymph nodes, bone, and brain. Rare sites of metastasis include the rectum, spleen, diaphragm, duodenum, esophagus, pancreas, seminal vesicle, and the urinary bladder. Treatment is often based on the stage of a tumor[2]. In addition to chemotherapy, liver transplantation offers the advantage of radical treatment for HCC because it can remove the tumor and restore normal liver function. A rare but possible outcome of this modality is skeletal muscle metastasis (SMM), a malignant tumor.

In this study, we report a case of a 70-year-old patient with long-term SMM of primary liver cancer in the muscularis of the right thigh, detected 6 years after liver transplantation without any other organ metastases.

A 70-year-old male had a rapidly growing mass on his right thigh, with no pain, redness, and swelling observed on the surface of the mass.

The patient had underlying chronic hepatitis B virus infection, and was diagnosed with HCC. He had received a liver transplant for primary liver cancer 6 years prior. He was admitted to the hospital after finding a rapidly growing mass on his right thigh.

The patient underwent a liver transplant for primary liver cancer 6 years prior.

The patient was retired, living with his son, and had no family history of hereditary disease.

The patient was hospitalized and his physical parameters were examined. The vital signs were as follows: Body temperature 36 °C, heart rate 85 beats/min, respiratory rate 16 breaths/min, blood pressure 130/85 mmHg, and oxygen saturation in room air 95%. There were no apparent signs of cranial nerve dysfunction. Muscle tone, strength, and deep tendon reflexes were normal in the upper extremities, while low in the inferior extremities with more on the right side. Abdominal cutaneous reflexes were normal. The remaining physical examination was unremarkable.

After re-sectioning the right lateral femoral soft tissue mass, the patient was examined intraoperatively (right thigh mass) with a circumscribed mass of 5 cm × 3 cm × 2 cm. The findings revealed that small muscle tissue was attached to the surrounding mass, and a section of the mass was light brown, solid, and multinodular.

During admission, physical examination showed an oval-shaped mass with a diameter of about 5 cm on the anterolateral part of the right thigh. It was hard to touch, had poor mobility, and was attached to the surrounding soft tissue. He had normal blood flow from the right lower limb with adequate movement; the skin temperature was normal, no abnormality was found in the sensory nerve examination, the physiological reflex was normal, and no abnormality was found in the rest of the review. The ultrasound examination revealed a mixed echo mass in the lateral soft tissue of the middle part of the right femur, with a size of approximately 5 cm × 2 cm × 3 cm, which had a clear boundary and regular shape. Figure 1A presents an ultrasound image of the muscularis in the right thigh in which the blood flow is indicated with undefined boundaries. Figure 1B depicts the arterial spectrum taken by color Doppler flow imaging. The ultrasound image showed that soft tissues covered the right side of the femur, the nature of which remains to be determined. Figure 2 presents circular abnormal signals in the middle part of the right femur near the lateral soft tissue, accompanied by surrounding soft tissue edema by magnetic resonance imaging (MRI). The images showed heterogeneous iso-signal intensity on T1WI and heterogeneous hyper-intensity on T2WI compared to the surrounding muscles, which had signal inhomogeneity. The size was about 4.5 cm × 1.4 cm × 3.1 cm; the boundary was slightly blurred, and there were a few pieces of long T2 signal in the adjacent soft tissue (Figure 2A and B).

The final diagnosis of skeletal metastases was made based on pathological results and clinical history, where the patient had liver transplantation for liver cancer without affecting any other organ metastases.

The patient underwent mass and peripheral musculature resection of the right vastus lateralis.

After resectioning the right lateral femoral soft tissue mass, the patient was examined intraoperatively (right thigh mass) with a circumscribed mass of 5 cm × 3 cm × 2 cm. Small muscle tissue was attached to the surrounding mass, and a section of the mass was light brown, solid, and multinodular. Figure 3 shows the immunohistochemical results: cluster of differentiation 68 (-), GATA (-), Inhibin A (-), Ki-67 (+40%), prostate-specific antigen (-), vimentin (-) cytokeratin 20 (CK20) (-), CK7 (-), CK-pan (+), giant cell fibroma-3 (lesions+), hepatocyte paraffin 1 (-), S-100 (-), thyroid transcription factor-1 (-), villin (weak + in local parts). The pathological testing confirmed the diagnosis of a malignant tumor based on medical history and immunohistochemical analysis, suggesting metastatic HCC with tumor thrombus visible in the vessel. After 1 mo, the patient was discharged, and he had no other symptoms. 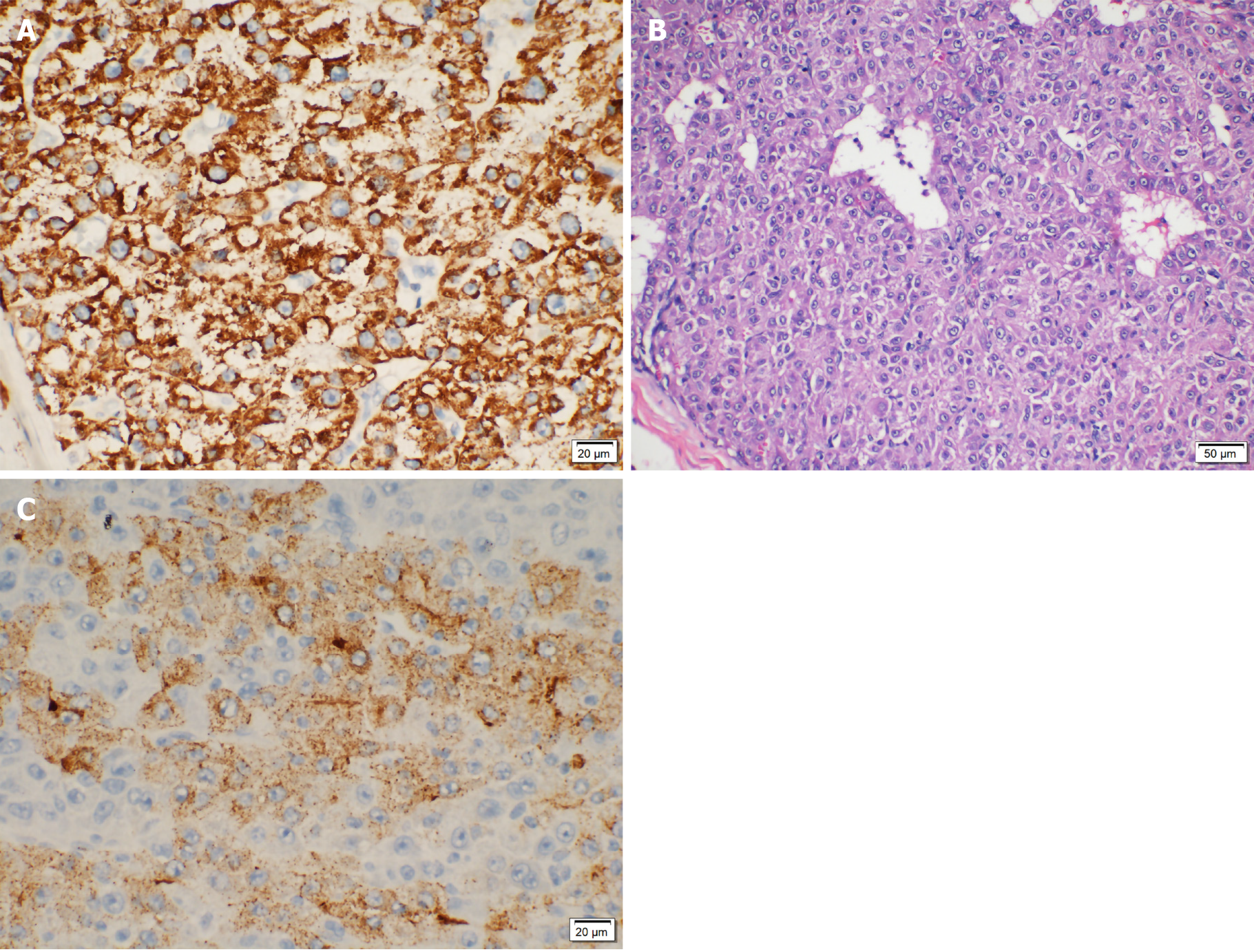 Here we report a case of an elderly male with SMM to his right thigh, 6 years after liver transplantation for liver cancer without metastases to other organs. HCC metastasis to the skeletal muscle is rare, not previously reported, and recognized as a possibility in patients with HCC.

SMMs have a poor prognosis that could cause functional impairment and increased short-term postoperative morbidity in patients with and without malignant diseases[34]. However, 1 mo later, this patient was discharged with no radiation or chemotherapy; we will continue to follow up for further analysis.