Emphysema pyelonephritis (EPN) is a very dangerous type of urinary tract infection. It is a lethal disease that develops rapidly and causes the patient to deteriorate rapidly, and it can easily lead to systemic infections and even sepsis. The incidence is extremely low, and it is prevalent in patients with diabetes. We here report a case of EPN in a non-diabetic patient with autosomal dominant polycystic kidney disease (ADPKD). We share the diagnosis and treatment procedure for this extremely rare condition to make this disease easier to identify and address early.

A 47-year-old woman presented to the emergency department of our hospital with a high fever and left back pain lasting 4 d. She had a history of autosomal dominant polycystic kidney and polycystic liver. She was diagnosed with left type I EPN and her vital signs deteriorated so quickly that she underwent an emergency operation in which a D-J tube was inserted into her left ureter on the second day after admission. Two months later, she underwent a second-stage flexible ureteroscopy and lithotripsy. Despite postoperative sepsis, she finally recovered after active symptomatic support treatment and effective anti-infective treatment.

Although EPN is more likely to occur in diabetic patients, for non-diabetic patients with ADPKD and upper urinary tract obstruction, the disease also causes rapid deterioration. Early and accurate diagnosis and timely removal of the obstruction by invasive means may be able to save the damaged kidney and the patient’s life.

Core Tip: Emphysematous pyelonephritis (EPN) is a rare but critical necrotizing infection. Most patients have diabetes, and the incidence of EPN in non-diabetic patients with autosomal dominant polycystic kidney disease (ADPKD) is extremely rare. There are very few published articles about conservative treatment and nephrectomy that are used to treat such patients. We present the clinical case of a 47-year woman who was diagnosed with EPN and multiple renal stones with ADPKD confirmed by a non-contrast computed tomography. The patient was treated successfully with insertion of a double “J” stent followed by a second-stage flexible ureteroscopy and lithotripsy. For non-diabetic patients diagnosed with EPN and ADPKD, it is critical to relieve the combined upper urinary tract obstruction by internal drainage.

Emphysematous pyelonephritis (EPN) is a severe, necrotizing infection involving the collecting system, renal parenchyma, and tissues surrounding the kidney. The reported treatment methods include antibiotics alone, ureteral stent placement, percutaneous nephrostomy, partial nephrectomy, and total nephrectomy[1-3]. Nevertheless, the cure rates have been found to vary significantly. Whether the condition needs surgical intervention or not, the timing of surgery, and the choice of surgical methods are worthy of discussion. We retrospectively analyzed the clinical data of EPN in a non-diabetic patient with autosomal dominant polycystic kidney disease.

A 47-year-old woman was admitted to the emergency department of the University of Hong Kong-Shenzhen Hospital with a 4-d history of fever and left loin pain.

Four days earlier, the patient developed fever, with a maximum body temperature of 39.3 °C, accompanied by pain and discomfort in the left waist. She went to other hospitals for treatment, but the results were not good. She went to the emergency department for further diagnosis and treatment.

The patient had a background of autosomal dominant polycystic kidney disease and polycystic liver disease.

The patient denied any tobacco or alcohol use. She had a past medical history of polycystic kidney and polycystic liver.

Initial vital signs at the emergency department were as follows: Blood pressure, 127/91 mmHg; heart rate, 133 beats/min; respiratory rate, 20/min; and body temperature, 38.5 °C. A hard mass was palpable at the level of the belly button on the right abdomen. There was no tenderness in the abdomen, but there was percussion pain in the left kidney area. 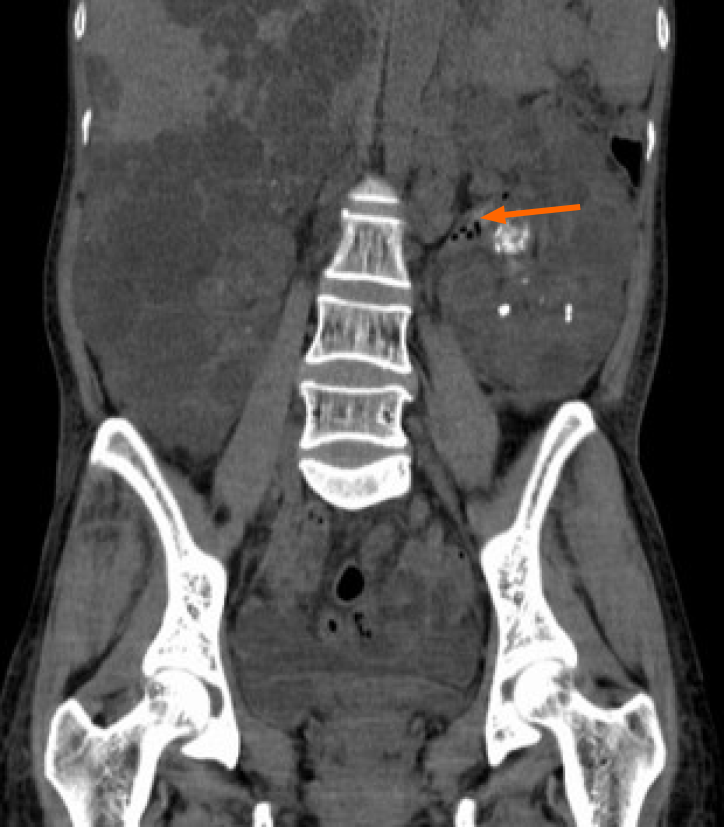 The patient was diagnosed with left type I EPN with autosomal dominant polycystic kidney disease (ADPKD) based on the classification system published by Huang et al[4].

Despite the oral antibiotic treatment (nitrofurantoin 100 mg q8 h), the patient’s condition rapidly deteriorated. On her second day in the hospital, she was urgently treated by insertion of a double “J” stent on the left side, which not only relieved the obstruction quickly but also allowed collection of a reliable urine specimen for culture. Intraoperative findings revealed that the left collecting system was full of pus, and culture of that pus yielded extended-spectrum beta-lactamase (ESBL) positive Escherichia coli. Her intravenous antibiotics were changed to imipenem-cilastatin (0.5 g q8 h) postoperatively. Postoperative CT showed that the left D-J tube was well positioned, the air spaces in the left collecting system had completely disappeared, and the left hydronephrosis was significantly better than before (Figure 2). Recovery was uneventful, and she was discharged on day 18 with oral antibiotics (fosfomycin trometamol 3.0 g qod). 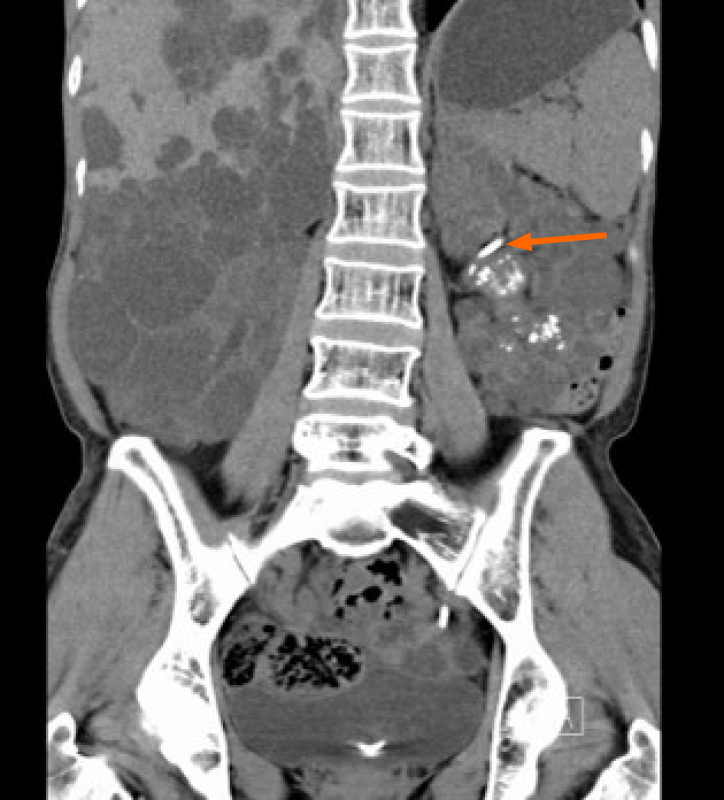 She was readmitted 2 mo postoperatively for removal of stones from the left renal pelvis. Oral antibiotic treatment (nitrofurantoin 50 mg q8 h) was prescribed because the urine routine showed many white blood cells. Flexible ureteroscopy lithotripsy was performed on day 9. The surgery was performed after two urine cultures were negative, and it proceeded relatively smoothly. She suddenly began to shiver 2 h postoperatively, and physical examination revealed blood pressure of 60/40 mmHg, heart rate of 133/min, and temperature of 41°C. Her white blood cell count was significantly decreased to 0.50 × 109/L (reference range, 3.89-9.93 × 109/L) with a platelet count of 117 × 109/L (reference range, 162-341 × 109/L). She then experienced severe hematuria. She was transferred to the intensive care unit urgently and was treated with intravenous antibiotics (meropenem 1.0 g q8 h). The right internal jugular vein was punctured to provide a central venous route for intravenous fluid resuscitation, and norepinephrine was prescribed to treat her life-threatening low blood pressure. The right radial artery was punctured to monitor arterial blood pressure and 600 mL of fresh plasma was transfused to correct coagulation disorders. A total of two blood cultures were performed and both were negative for bacteria and fungi. After 4 d of active treatment in the intensive care unit, the patient’s general condition improved, and she was transferred back to the general ward. Over the next 10 d, we continued to give her meropenem treatment (1.0 g q8 h) and postoperative CT showed that the stones in the left renal pelvis had been cleared, while just a few stones remained in the lower calyx (Figure 3). 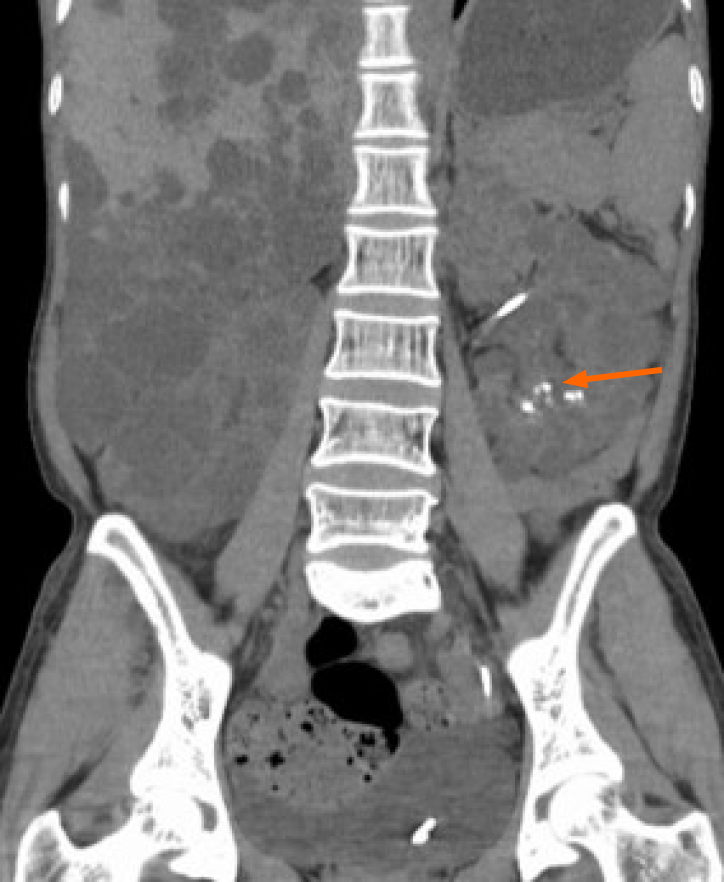 The patient was discharged on the 23rd day after admission with a 2-wk prescription for oral antibiotics (fosfomycin trometamol 3.0 g qod). She has been followed in our hospital for 44 mo since her discharge. Her serum creatinine has remained below 100 μmol/L (reference range, 46-92 μmol/L). CT showed no stones in the left renal pelvis, and the stones in the lower calyx were also significantly smaller in size and fewer in number than before (Figure 4). 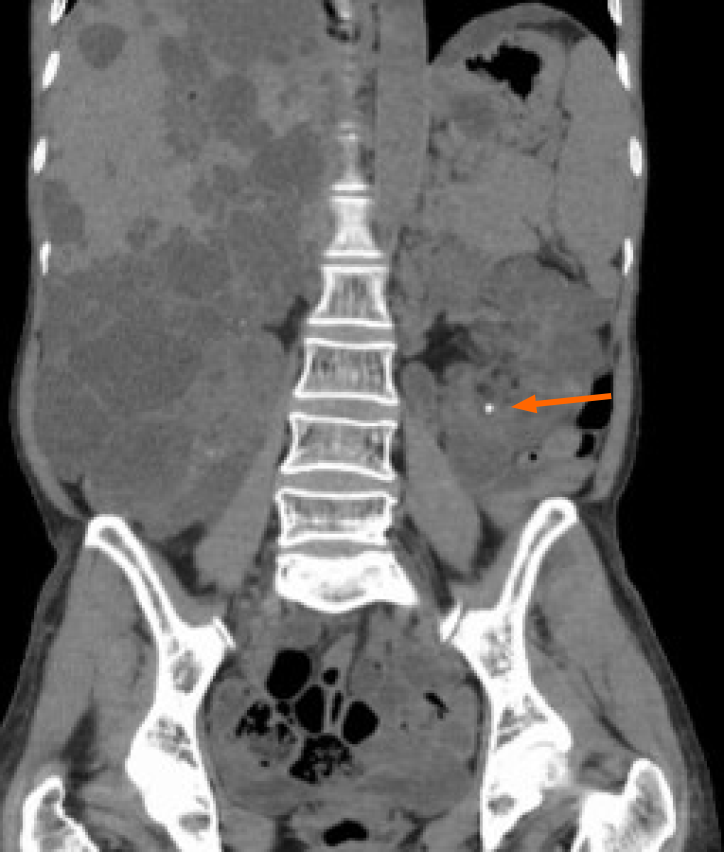 EPN is a rare infectious disease associated with severe renal necrosis. Common clinical manifestations are dysuria, urgency, frequency, and fever[5]. These manifestations are similar to those of acute cystitis, so EPN can be misdiagnosed and treatment may be delayed. If a patient’s condition continues to worsen despite treatment with antibiotics alone, it may be necessary to perform a urinary CT scan immediately.

Lu et al[6] summarized the etiology of 51 cases of EPN in 14 years and found that the most common pathogen was Escherichia coli, a gas-producing bacterium. The culture of pus from left collecting system of this case also yielded Escherichia coli. ADPKD resulted in a decrease in blood flow of renal parenchymal and poor drainage of the cysts, which were beneficial to the growth of Escherichia coli. Microvascular disease can also lead to more severe local hypoxia and ischemia in the kidneys.

Sokhal et al[7] retrospectively studied 74 cases of emphysema pyelonephritis. They found that more than 85% of patients had diabetes mellitus, which was the most common comorbidity, followed by urolithiasis (32.43%). In our case, the patient did not have diabetes, but she suffered from pelvic stones causing hydronephrosis. This made it easier for Escherichia coli to digest glucose, which produced a large amount of gas and aggravated the ischemic necrosis of the diseased tissue. Then the necrotic tissue promoted Escherichia coli reproduction. For these reasons, when clinical symptoms combined with imaging data can confirm the diagnosis of EPN early, sensitive antibiotics should be administered as soon as possible. Hence, for this patient, blood and urine cultures were performed immediately after admission and urine culture indicated ESBL-positive Escherichia coli but blood culture was negative. Insertion of a double “J” stent was particularly helpful to relieving the combined upper urinary tract obstruction, and it contributed to our ability to put together an effective antibiotic regimen.

In 2013, Jaisuresh et al[8] reported the fifth case of polycystic kidney disease with bilateral EPN in the world. They did not achieve positive culture results in the patient’s urine or blood, but they did detect Escherichia coli in cystic fluid obtained after percutaneous nephrostomy of the renal cyst. The cause of septic shock of our patient may be that the bacteria in the collecting system translocated into the blood under the irrigation used in the operation.

EPN is an acute, severe, rapidly progressing, and potentially fatal disease that often occurs in people with diabetes. Physicians have very little experience in this area since the incidence of EPN in non-diabetic patients, especially patients with ADPKD, is extremely low. Rapid and accurate diagnosis and timely response are extremely important. However, it is difficult to perform external drainage of percutaneous nephrostomy in patients with ADPKD, so emergency internal drainage and ureteroscopy to remove the obstruction under low renal pelvic pressure may be an effective kidney-preserving treatment.