A 61-year-old male presented with 15-d history of diarrhea and lower-limb edema. A large mass was detected in the pelvis, and pathology indicated non-Hodgkin diffuse large B-cell lymphoma. After three cycles of the R-CHOP chemotherapeutic regimen, the patient showed three subcutaneous nodules under the left armpit and both sides of the cervical spine. Pathological examination of the nodules indicated DLBCL again. The patient was diagnosed with relapsed and refractory diffuse large B-cell lymphoma. We recommended CAR-T cell treatment. Before treatment, the patient’s T cell function and expression of immune detection points were tested. Expression of PD-1 was obviously increased (52.7%) on cluster of differentiation (CD)3+ T cells. The PD-1 inhibitor (3 mg/kg) was infused prior to lymphodepleting chemotherapy with fludarabine and cyclophosphamide. CAR-CD19 T cells of 3 × 106/kg and CAR-CD22 T cells 1 × 106/kg were infused, respectively. The therapeutic effect was significant, and the deoxyribonucleic acid copy numbers of CAR-CD19 T cells and CAR-CD22 T cells were stable. Presently, the patient has been disease-free for more than 12 mo.

This case suggests that the combination of PD-1 inhibitors and CAR-T cells improved therapeutic efficacy in B-cell lymphoma.

Core Tip: The mechanism of early loss of chimeric antigen receptor T (CAR-T) cells may be the depletion of activated T cells due to stimulation of the immune checkpoint pathway [such as programmed cell death protein-1 (PD-1)] of lymphoma cells. Immune checkpoints have a critical role in the immune system. This case suggests that PD-1 expression may affect the therapeutic effect of CAR-T cell therapy, and combination CAR-T cells and a PD-1 inhibitor may be a viable treatment option for relapsed and refractory non-Hodgkin lymphoma.

With the development of new targeted drugs, the remission rate of non-Hodgkin lymphoma (NHL) has significantly improved, but some patients still experience relapse and refractory disease. In addition to targeted therapy, immunotherapy plays a leading role in the treatment of lymphoma. In particular, chimeric antigen receptor T (CART) cell immunotherapy has been beneficial for many refractory lymphoma patients. However, some B-cell lymphoma patients experience poor effects on this therapy. The efficacy of CAR-T cell therapy in patients with relapsed/refractory NHL has been less impressive compared to that in patients with acute lymphoid leukemia[1]. After 12 mo of CAR-T cell therapy, the relapse-free survival rate of patients is reduced to 60%, and the main cause of relapse is the early loss of CAR-T cells. The mechanism of loss may be the depletion of activated T cells due to stimulation of the immune checkpoint pathway [such as programmed cell death protein-1 (PD-1)] of lymphoma cells. Immune checkpoints have a critical role in the immune system. Based on the above theory, we boldly tried a combination of CAR-T cell therapy and a PD-1 inhibitor to treat a patient with relapsed and refractory NHL, which led to satisfactory results[2].

A 61-year-old male patient was admitted to the Gastrointestinal Surgery Department and subsequently transferred to the Hematology Department, Second Hospital of Hebei Medical University. He presented with diarrhea and edema of the lower limbs that had lasted for 15 d.

The patient’s symptoms of diarrhea and edema had started 15 d previously and had worsened over the last 2 d.

The patient had no personal or family history.

The patient’s temperature was 36.6°C, heart rate was 88/bpm, respiratory rate was 18 breaths/min, blood pressure was 110/80 mmHg, and oxygen saturation in room air was 99%. Physical examination of hypogastria found a pelvis mass 15 cm in the maximum dimension. Our first clinical consideration was the possibility of sigmoid colorectal cancer.

The final diagnosis indicated non-Hodgkin DLBCL (non-germinal center B-cell like). According to Ann Arbor staging classification, the lymphoma was categorized as stage IV.

One month later, the nodules were obviously enlarged. The patient was diagnosed with relapsed and refractory DLBCL. We recommended that he should receive anti-CD19 and anti-CD22 CAR-T cell treatment. Before treatment, the patient’s T cell function and expression of immune detection points were tested. The expression of PD-1 was obviously increased (52.7%) on the CD3+ T cells. Therefore, he was given a PD-1 inhibitor before CAR-T cell treatment. The PD-1 inhibitor carrizumab (3 mg/kg) was infused into the patient before fludarabine and cyclophosphamide pretreatment was administered. The numbers of CAR-CD19 T cells and CAR-CD22 T cells were 3 × 106 /kg and 1 × 106/kg, respectively.

Eight day after CAR-T infusion, the lung CT showed that there were more nodules in both lungs. We considered the pulmonary nodules to be lymphoma. After the infusion of CAR-T cells for 10 d, the deoxyribonucleic acid (DNA) copy numbers of CAR-CD19 T cells and CAR-CD22 T cells were 7.98 × 103/µg and 3.07 × 103/µg, respectively. However, the peripheral blood cell counts decreased significantly, and many hemophagocytes were seen in the bone marrow. This systemic inflammatory response syndrome was related to CAR-T cell treatment, and the patient was treated with dexamethasone for 5 d.

On the 14th d after CAR-T cell treatment, the subcutaneous nodules began to shrink and were smaller. On the 19th d, PD-1 expression decreased to within the normal range (2.04%). On day 20 after combination therapy, the highest copy numbers of anti-CD19 and anti-CD22 CAR DNA detected were 8.13 × 104/µg and 2.26 × 104/µg, respectively. The changes in DNA copy numbers of CAR-CD19 T and CAR-CD22 T cells for 2 mo are shown in Figure 1. On the 21st day after initiating combination therapy, the results of lung CT showed that the multiple nodules in the two lungs had reduced in size (Figure 2A) and that the peripheral blood cell counts returned to normal levels. After 28 d of combination therapy, the skin nodules were reduced, and had disappeared by the 3rd mo (Figure 2B). In the 5th month, the DNA copy numbers of CAR-CD19 T cells and CAR-CD22 T cells were 1.82 × 102/µg and 1.92 × 103/µg, respectively. The patient’s positron emission tomography-CT results at this time showed complete metabolic remission of the lymphoma (Figure 2C). At present, the patient has been disease-free for more than 12 mo. 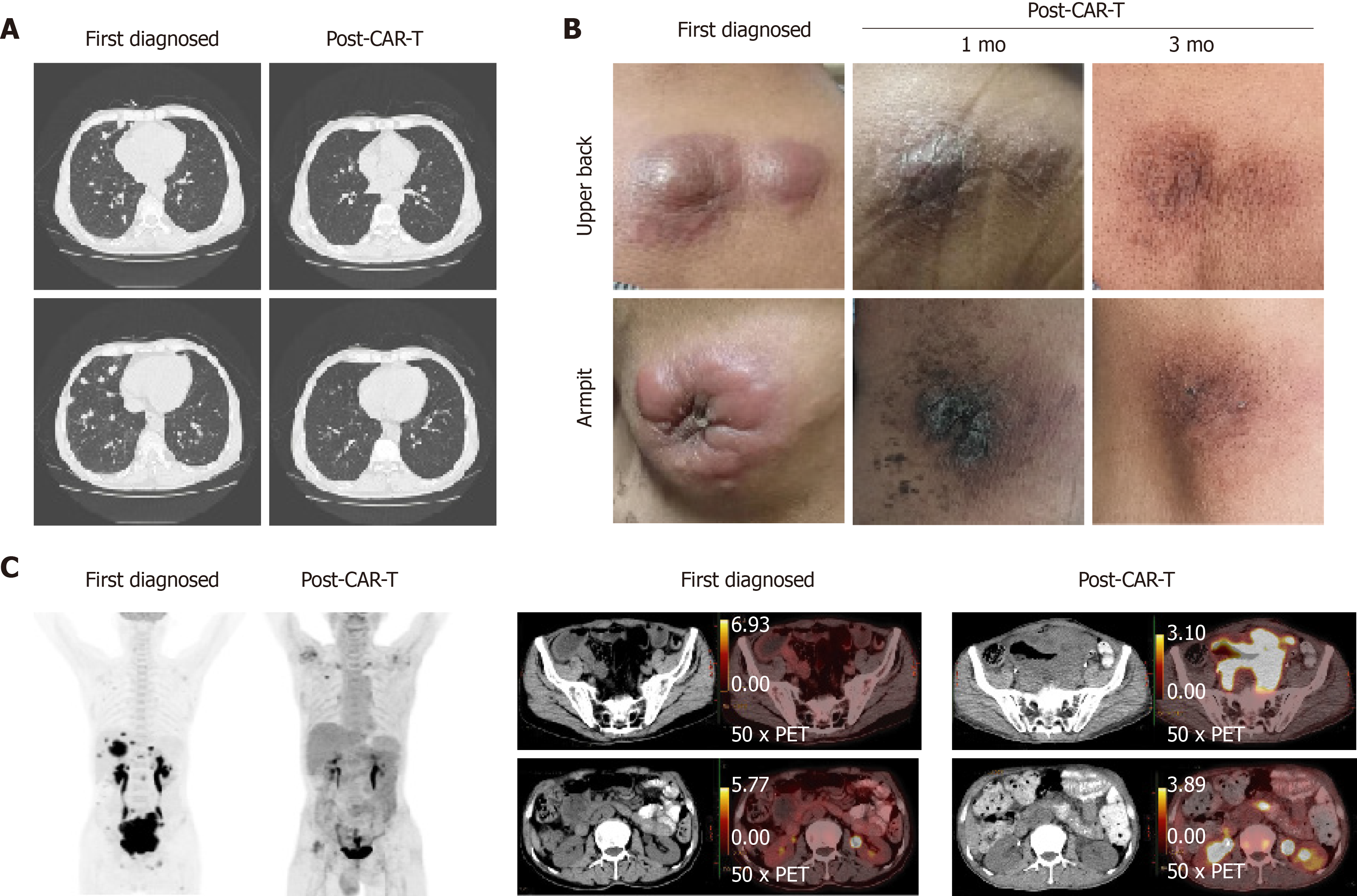 Figure 2 Changes in lung, subcutaneous mass, and abdominal mass before and after chimeric antigen receptor T cell therapy. A: The patient developed multiple pulmonary nodules after disease progression detected by computed tomography. After treatment with chimeric antigen receptor T cell (CAR-T) and programmed cell death protein-1 inhibitor for 21 days, the absorption of pulmonary nodules decreased significantly; B: Changes in the subcutaneous mass before and after CAR-T cell therapy. The comparison of local mass size before and after CAR-T cell treatment in the 1st mo and 3rd mo; and C: Changes in the abdominal mass detected by positron emission tomography-computed tomography before and after CAR-T cell therapy. In early diagnosis of the disease, the maximum standardized uptake values were 22.40 and 15.60 in the abdomen and pelvis, respectively. 5 mo after the combination treatment, the maximum standardized uptake values in the abdomen and pelvis were 3.80 and 3.30, respectively.
DISCUSSION

Emerging evidence has identified many types of inhibitory molecules, including immunosuppressive cells and cytokines, in the microenvironment of tumors; autoimmune inhibition may inhibit the activity of CAR-T cells and weaken its therapeutic effect[3]. Through the active interaction between checkpoint molecules and ligands, inhibitory signals can escape immune surveillance, leading to T cell failure and tumor tolerance[4]. The expression of PD-1 in CAR-T cells is significantly up-regulated, which reduces the level of anti-tumor immune response and allows tumor cells to escape the immune system[5]. In vitro experiments have shown that blocking the PD-1/PD-1 ligand (PD-L1) pathway not only increases the number of T cells but also enhances the anti-tumor effect of T cells by changing the tumor inhibitory microenvironment[6]. Previous studies have shown that PD-1 inhibitors can improve and prolong the therapeutic effect of CAR-T cells treatment[7]. Blocking the signal transduction between PD-L1 and PD-1 can improve the function of CAR-T cells and make their effect longer lasting[8]. CAR-T cell therapy combined with PD-1 inhibitors or cytokine inhibitors can improve the overall or local immune environment, which can significantly enhance the overall anti-tumor effect[9-11].

Clinical research has proven that combination CAR-T cell therapy and PD-1 checkpoint blocker is a very effective treatment for solid tumors, and this combination has yielded good results in the treatment of hematologic tumors[12,13]. Another way to combine CAR-T cell therapy with an immunosuppressant is genetic engineering. T cells expressing the single-chain variable fragment of PD-1 antibody can block the interaction between immune cell PD-1 and tumor cell PD-L1, thus negating the immunosuppression[14]. Therefore, using genetic engineering to knock out the PD-1 gene or "graft" PD-1 antibody into CAR-T cells is one direction for new research in CAR-T cell therapies[10].

Our research has confirmed once again that PD-1 blockade plays a key role in the regulation of T cell-mediated anti-tumor therapy. The combination not only improved the therapeutic efficacy in B-cell lymphoma but also provided a novel treatment option for relapsed/refractory instances of the disease. In addition to PD-1, there are other immune checkpoints on lymphoma cells. Whether blocking them can also improve the efficacy of CAR-T cell therapy remains to be determined.