A 71-year-old woman presented with blurred vision due to cataracts. Slit-lamp microscopy revealed bilateral hyaline scrolls with a dichotomous branching pattern extending to the anterior chamber or rods attaching to the rough posterior surface of the cornea. The patient was positive for syphilis-specific antibodies, with no ocular or systemic evidence of congenital or acquired syphilis. Binocular cataract, retrocorneal scroll, and corneal endothelial gutta were considered. The scroll of the right eye was removed during cataract surgery and further observed using hematoxylin–eosin staining and scanning electron microscopy. The cornea of the right eye remained transparent, and the residual scroll seemed stable, however, the corneal endothelial density declined at 13 mo after surgery. In vivo confocal microscopy revealed coalescence of corneal guttae at the level of the corneal endothelium or adhesion to the posterior surface of the endothelium, with enlarged endothelial cells in both eyes. Activated keratocytes in the stroma and a highly reflective acellular structure at the level of the Descemet’s membrane were observed. The removed scroll had a cartilage-like hardness and a circularly arranged fiber-like acellular structure.

Occult congenital syphilis could induce corneal endothelial gutta and the formation of retrocorneal scrolls without other signs of ocular syphilis.

Core Tip: Retrocorneal scrolls are usually considered to be associated with some infectious keratitis. Here, we report a case of bilateral retrocorneal hyaline scrolls and corneal gutta, without other ocular or systemic positive signs, which was likely induced by asymptomatic congenital syphilis. The characteristic changes of the cornea were observed by in vivo confocal microscopy. The removed scrolls were analyzed by hematoxylin-eosin staining and scanning electron microscopy. Our findings provide new insight into the pathogenesis of keratopathy in congenital syphilitic corneal disease.

However, we encountered a case of bilateral retrocorneal translucent scrolls with corneal endothelial gutta with no history of ocular inflammation, tumor, trauma, surgery, or systemic diseases. This patient was positive for syphilis-specific antibodies and type I herpes simplex virus immunoglobulin G (IgG) antibodies. Further observation using in vivo confocal microscopy and in vitro histology, combined with a review of the previous literature, suggested that the corneal endothelial gutta and retrocorneal scrolls were formed due to occult congenital syphilis in the patient.

A 71-year-old woman was referred to our clinic with a complaint of bilateral blurred vision that persisted for the past 3 years.

The patient had no other positive symptoms apart from blurred vision.

The patient had no history of ocular diseases, allergy, trauma, surgery, or systemic diseases. She did not use any eye drops or take any medication.

The patient was married and had two sons. There was no family history of ocular disease.

At initial examination, her visual acuity was 20/400 in the right eye and 20/60 in the left eye, with no improvement by correction. Intraocular pressures were 10 and 12 mmHg in the right and left eyes, respectively. Slit-lamp microscopy revealed a rough endothelial surface and a translucent antler-shaped scroll that extended to the anterior chamber, with the terminal end attached to the posterior surface of the cornea by a stalk in the right eye (Figure 1A). Two similar translucent rod-like scrolls were also detected on the corneal endothelium of the left eye (Figure 1B). In both eyes, the crystalline lens demonstrated opacification, and the anterior chamber was deep and clear, with no abnormality observed in the posterior segment. Ultrasonic biological microscopy demonstrated the free end of the scroll in the anterior chamber of the right eye (Figure 1C) and rough endothelium of the cornea in the left eye (Figure 1D), with increased reflectivity of the posterior corneal surface in both eyes. The corneal endothelial densities of the right and left eyes were 1059 and 1800 cells/mm2, respectively. In vivo confocal microscopy revealed activated keratocytes and alteration in the extracellular tissue of the stroma, manifesting as thin bright lines (Figure 2A). Tubular structures could be found in the posterior stroma (Figure 2B). A highly reflective acellular structure could be observed at the level of the Descemet’s membrane (Figure 2C). Strip guttae (Figure 2D) and flake high-reflective fused guttae (Figure 2E) were detected on the endothelium of the left eye. Extensive coalescence of the corneal guttae, which had an appearance similar to a paving-stone, was observed on the right eye (Figure 2F) and was associated with endothelial pleomorphism and polymegathism. 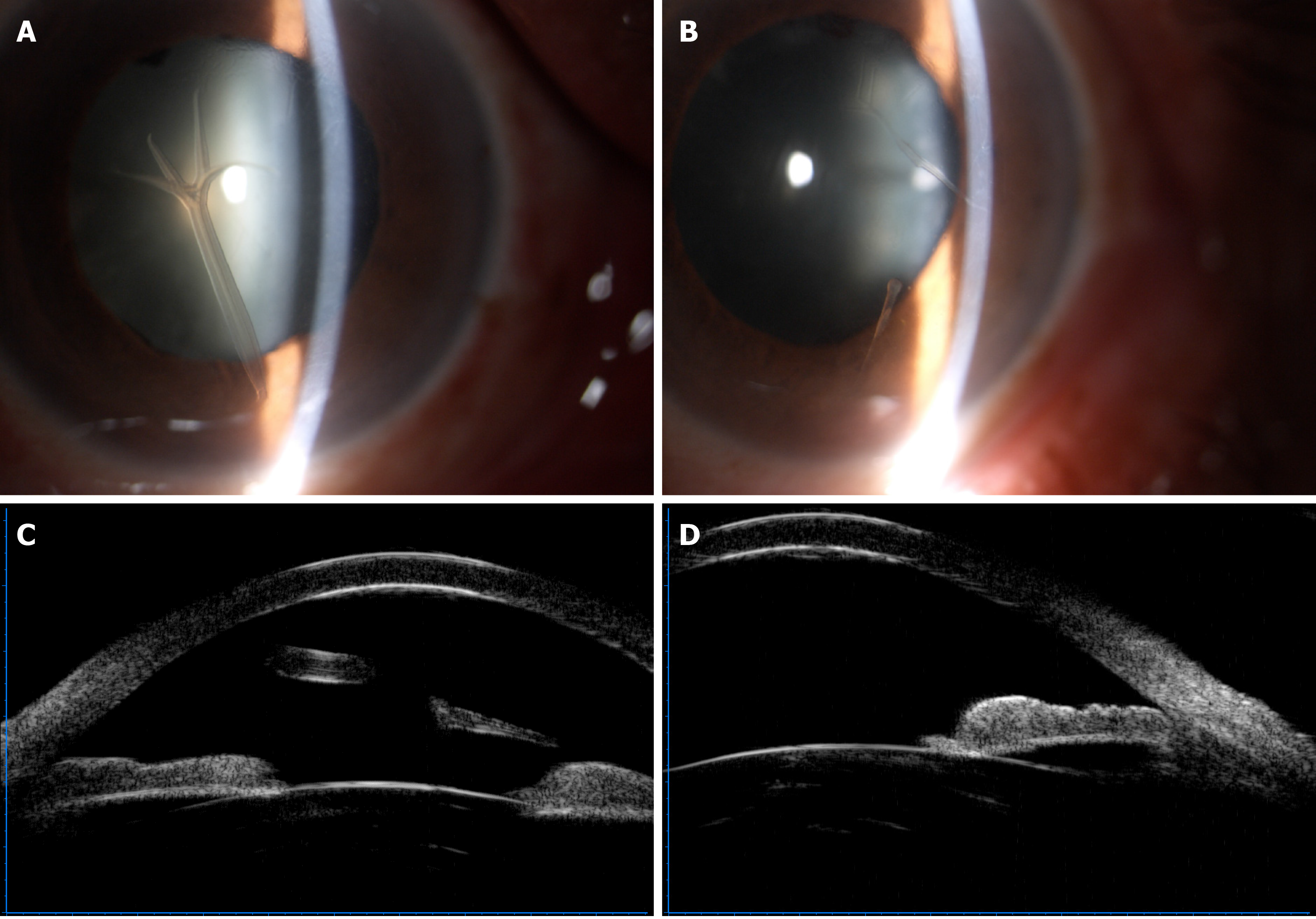 Figure 1 Appearance of retrocorneal scrolls under slit-lamp microscopy and ultrasonic biological microscopy. A-D: An antler shaped scroll extended to the anterior chamber and attached to the posterior surface of the cornea by a stalk in the right eye (A), and rod-like scrolls adhered to the corneal endothelium in the left eye (B). Free end of the scroll in the left eye (C) and adhered scroll in the right eye (D) with increased reflectivity of the posterior surface of the corneas were observed by ultrasonic biological microscopy. 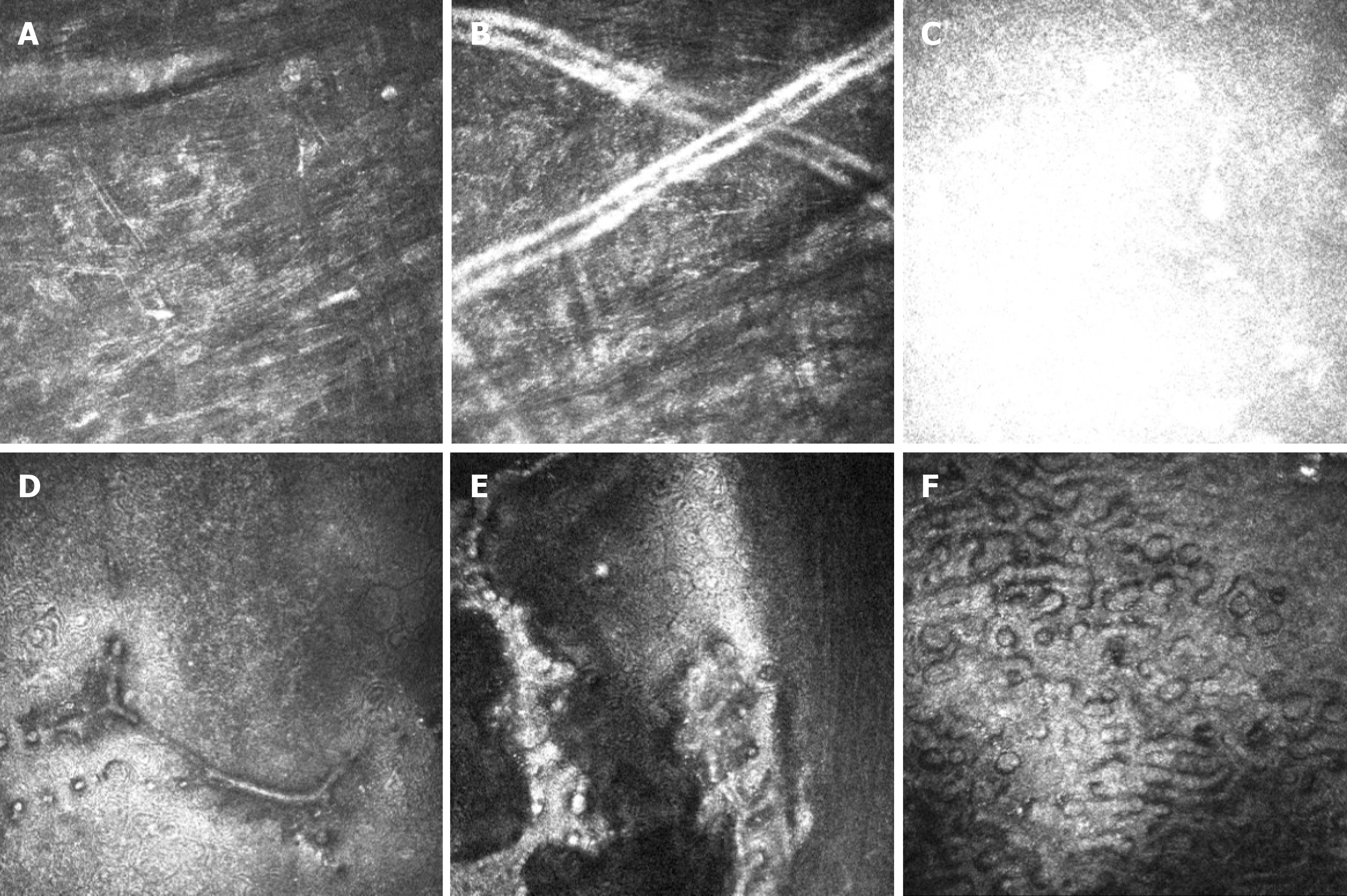 Among the infection indicators, the patient was positive for syphilis-specific antibodies, type I herpes simplex virus IgG antibodies, and hepatitis B IgG antibodies. She was negative for all remaining indicators, including rubella, toxoplasma, herpes Epstein-Barr virus, human immunodeficiency virus, and other hepatitis viruses. There was no presence of autoimmune antibodies, vasculitis-related antibodies, or HLA-B27CD3. The results of the cytometric bead array were negative for inflammatory cytokines, including interleukin (IL)-2, IL-4, IL-6, IL-10, tumor necrosis factor-α, and interferon-γ in the aqueous humor. 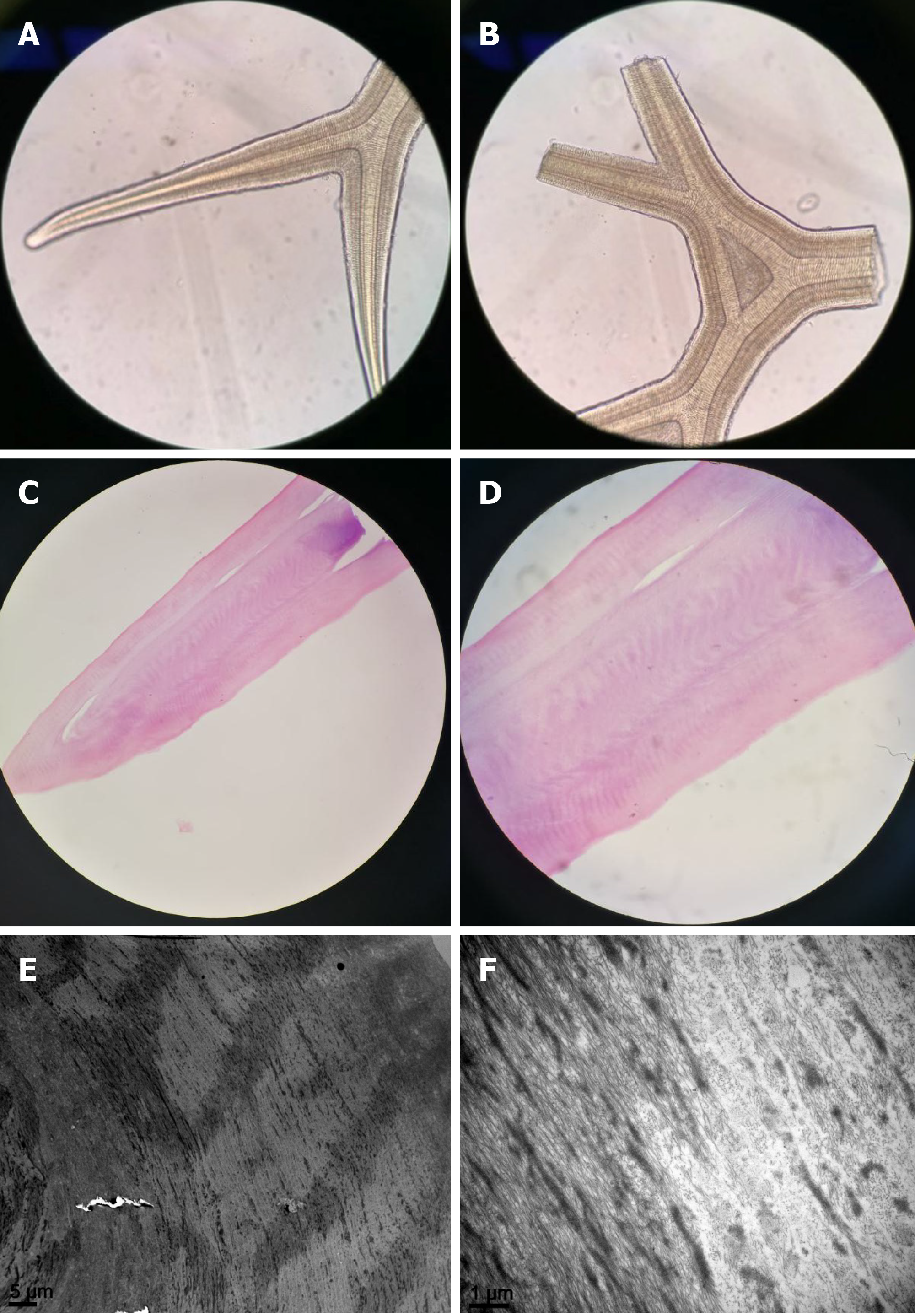 The patient underwent phacoemulsification extracapsular extraction combined with intraocular lens implantation in the right eye. After the intraocular lens was placed, we extracted 0.2 mL of aqueous humor at the beginning of the surgery and removed the scroll. We found that the low end of the scroll tightly adhered to the endothelium. To prevent destruction of the corneal endothelium, we cut the scroll above the stalk and found it to be somewhat tough, similar to a cartilage. The removed scroll was divided into several sections for hematoxylin-eosin staining and examination by scanning electron microscopy.

The visual acuity of the patient’s right eye improved to 20/25 at 2 mo after surgery. The cornea was still transparent with the residual scroll, and the corneal endothelial density decreased to 944 cells/mm2. At 13 mo after surgery, the corneal endothelial density continuously decreased to 783 cells/mm2 in the right eye and 1573 cells/mm2 in the left eye, although the corneal scrolls remained stable in both eyes, with good corneal transparency.

Retrocorneal scrolls or ridges are a rare ocular manifestation. They are primarily associated with interstitial keratitis, especially congenital syphilis. Additionally, retrocorneal scrolls have been reported in herpes interstitial keratitis, congenital glaucoma, and trauma[1-3]. Here, we report a rare case of bilateral retrocorneal translucent scrolls with corneal endothelial gutta. The patient did not have a history of systemic or ocular diseases and had no other positive ocular signs. She was positive for syphilis-specific antibodies and type I herpes simplex virus IgG antibodies. These two kinds of viruses are typically associated with keratitis and uveitis[1,4]. However, there was no manifestation of keratitis or uveitis in this patient, and the anterior chamber showed no change in inflammatory cytokines, indicating that the scroll formation was slow without inflammation. Because previous studies have indicated a connection between scrolls and syphilis, positive syphilis-specific antibodies appeared to be an important clue in the formation of scrolls in our patient.

Waring et al[2] reported that the scrolls appear as rounded, glassy elevations protruding from the posterior cornea and thickened multilaminar Descemet’s membrane or focal secondary guttate excrescences. The scrolls could manifest as rods, lines, dichotomous branches, or arborizing networks. In some cases, they can extend into the anterior chamber through a sucker-like fusion with the posterior cornea in the other terminal, similar to a stalk. In our patient, the appearance of the scrolls was completely consistent with the reports of previous studies[2,6,7]. Based on histopatho-logical and electron microscopy findings, we found that the scroll was composed of regularly, circularly arranged collagen fibers with a cartilage-like hardness, having no cellular or vascular structures. Previous studies have demonstrated that the scrolls are composed of a multilayered amorphous, acellular matrix, which has been confirmed to be consist of collagenous components and glycosaminoglycans[2,6,7].

In vivo confocal microscopy demonstrated a close connection between the scrolls and corneal endothelial lesions. The corneal lesion in the left eye seemed to be at an earlier stage than that in the right eye. In the left eye, we observed mound-shaped excrescences within the corneal endothelium, followed by a confluence and bulge on the endothelial surface. Some pieces of confluent corneal guttae adhered to the posterior surface of the endothelium. In the right eye, we observed a much higher level of confluent guttae on the corneal endothelium, which had a paving-stone-like appearance, accompanied by pleomorphism and polymegathism. Waring et al[2] reported corneal guttate in 88% of their case series and illustrated the changes in the corneal endothelium with vivid schematics. The detailed images in our case strongly indicate the changes in the endothelium in vivo. Activated keratocytes with altered extracellular components in the mid-posterior stroma and tubular structures in the posterior stroma were also found, which indicated that the stroma was likely in a low-grade inflammation. A highly reflective acellular structure at the level of the Descemet’s membrane seemed to be the newly produced extracellular matrix. Tubular structures were also found on the posterior stroma, which were suspected to be ghost vessels for their hollow appearance.

Although the retrocorneal scrolls remained stable over the 13-mo follow-up period in our patient, a continuously decrease in corneal endothelial density was found, particularly after cataract surgery. Corneal endothelial decompensation was reported in previous patients with syphilitic interstitial keratitis[2,6,8]. Therefore, further investigation and long-term follow-up are needed to attention the change of the corneal endothelium.

We present the case of a patient with retrocorneal scrolls and corneal gutta showing no other positive inflammatory symptoms or signs. Occult congenital syphilis infection was the most likely cause. In vivo confocal microscopy demonstrated the characteristic manifestation of the corneal endothelium. Our findings may provide new insight into the pathogenesis of keratopathy in patients with congenital syphilitic corneal disease.