Hemorrhoidal prolapse is a common benign disease with a high incidence. The treatment procedure for prolapse and hemorrhoids (PPH) remains an operative method used for internal hemorrhoid prolapse. Although it is related to less pos-operative pain, faster recovery and shorter hospital stays, the postoperative recurrence rate is higher than that of the Milligan-Morgan hemorrhoidectomy (MMH). We have considered that recurrence could be due to shortage of the pulling-up effect. This issue may be overcome by using lower purse-string sutures [modified-PPH (M-PPH)].

To compare the therapeutic effects and the patients’ satisfaction after M-PPH, PPH and MMH.

M-PPH has many advantages for severe hemorrhoids (Goligher stage III/IV), with a low rate of anastomotic bleeding and recurrence and a very high rate of patient satisfaction.

Hemorrhoidal prolapse is a common benign condition with a high prevalence. The prevalence of hemorrhoids is reported to be about 40%, as high as 80% in asymptomatic hemorrhoids[1,2]. The incidence rate of anorectal diseases in adults is about 50.1%. Approximately 520 million people were found to suffer from anorectal disease to different degrees in China’s 2015 anorectal disease epidemiology survey; 98.08% of these individuals had hemorrhoid symptoms[3].

On the basis of the severity of the clinical features, the Goligher classification divides hemorrhoids into four grades[4]. Treatment of hemorrhoids requires selective treatment based on individual symptoms and complications, and most patients with hemorrhoid (grade I/II) can be treated conservatively, including dietary changes with sufficient fluids and fiber while limiting prolonged toilet use. Surgery is still the treatment of choice for patients who fail conservative treatment and those who have grade III or IV hemorrhoids with active bleeding or persistent prolapse. There are currently many types of surgical treatments for hemorrhoids, with traditional hemorrhoid operations consisting of Milligan–Morgan[5] or Ferguson procedures and diathermy hemorrhoidectomy[6,7]. However, severe postoperative pain and a high rate of postoperative recurrence are the main reasons for low patient satisfaction and why the traditional surgical techniques are not highly recommended.

We consider that one of the reasons for the persistent recurrence of hemorrhoid prolapse may be that purse-string sutures are placed too high to provide the pull-up effect. Consequently, we have designed a modified PPH (M-PPH) with lower purse-string sutures. In this study, we retrospectively studied different surgical techniques for the treatment of severe hemorrhoids, including MMH, conventional PPH and M-PPH with a 5-year follow-up period.

The study was approved by the Ethics Committee of the 2nd Affiliated Hospital and of Wenzhou Medical University.

For M-PPH (Figure 1), double purse-string sutures were inserted: One was 0.5-1.0 cm above the dentate line, and the other was 0.5 cm from the distal of the first purse-string suture. For original PPH, purse-string sutures were applied 4 cm from the dentate line[8]. A PPH03 hemorrhoidal circular stapler (Ethicon hemorrhoidal circular stapler, Cincinnati, OH, United States) was used for both the original PPH and M-PPH procedures. Furthermore, conventional Milligan-Morgan hemorrhoidectomy was performed as described by Goligher[4]. MMH was performed under Yaoshu point anesthesia, while the other procedures were performed mainly under spinal anesthesia. Perioperatively, all patients received two doses of a second-generation cephalosporin. Postoperative analgesia consisted of ketorolac tromethamine (60 mg, twice a day) and celecoxib (200 mg, twice a day). Patients were advised to wash their perianal wound with water after defecation and use mupirocin ointment for external application.

Figure 1 Patients with prolapsing hemorrhoids treated with a modified procedure for prolapse and hemorrhoids. A: Preoperative hemorrhoids status; B: The hemorrhoids were exposed; C: Absorbable sutures were fixed in a modified location, the circular stapler was tightened, and the gun was fired; D: The mucosa was dissected.
Assessment and postoperative follow-up

Five years after the operation, telephonic follow-up was used to investigate patient satisfaction. A scale of 1–4 (1 = dissatisfied, 2 = poorly satisfied, 3 = satisfied, 4 = very satisfied) was provided to the patient.

SPSS for Windows (version 22.0) was used for all statistical analyses. Continuous variables are presented as means ± standard deviation or medians (range). Statistical analyses were performed using the chi-square test and ANOVA. Kruskal-Wallis H tests were used for variables with non-normal distributions to assess differences in the VAS between the MMH, PPH and M-PPH groups (all pairwise for multiple comparisons). The data processing and graphics produced were carried out using R statistics software (The R Foundation, Vienna, Austria). P values < 0.05 were considered statistically significant. The statistical methods of this study were reviewed by Bo Ye from the Department of Biostatistics, School of Public Health, State University of New York at Albany.

Patients’ characteristics are shown in Table 1. There were no significant differences among the patient groups in terms of sex, age or grade of hemorrhoids.

The rate of postoperative anastomotic bleeding was low in all procedures (M-PPH: 1.9%, PPH: 5.1%, MMH: 3.7%), and the incidence in the M-PPH group was significantly lower than in the PPH group (P < 0.0001; Figure 3A). Five patients who failed to respond to conservative treatment who repeatedly experienced anastomotic bleeding after M-PPH were treated with an 8-shape suture in an outpatient operation, after which bleeding ceased. 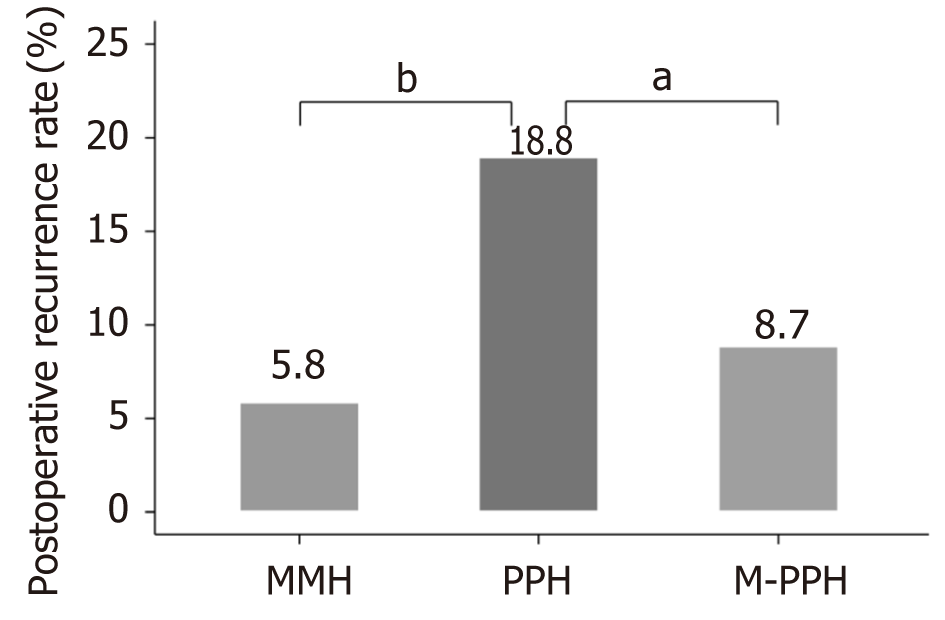 Overall, the reoperation rates were 1.3%, 4.7% and 2.8% in the MMH, PPH and MMH groups, respectively (P < 0.001). None of these patients experienced any further recurrences during the follow-up period.

PPH offers unique advantages over traditional hemorrhoidectomy, such as shorter length of hospital stay, less postoperative pain and fewer lost workdays[9-12]. However, high postoperative recurrence and serious long-term postsurgical complications have been reported[2,13-17]. To address these complications, we have devised a new M-PPH procedure characterized by lower placement of the double purse-string sutures. Here, we compared the effects and postoperative complications of the M-PPH, PPH and MMH. We showed that the M-PPH is superior to traditional surgery for severe hemorrhoids (stage III/IV) in the rate of anastomotic bleeding, recurrence and patient satisfaction.

The postoperative pain of the MMH group was significantly higher at each timepoint than in the other groups. Similar results have previously been reported in the literature[10,20,21]. There was also a difference in the types of pain experienced by patients after the MMH or PPH. After open hemorrhoidectomy, the pain felt by patients tended to be cutting and sharp, while that after PPH involved a distended discomfort or more vague pain. This was not surprising because the PPH technique does not involve excision of the perianal skin. However, for M-PPH, placement of the purse-string suture closer to the dentate line resulted in more severe postoperative pain[9,22].

The lower stapling height used for M-PPH resulted in full exposure of the operative field; thus, it was easy to find the bleeding point and stop bleeding during the operation. Another possible reason for the significant reduction in anastomotic bleeding after M-PPH compared to PPH is that the height of the load suture caused the removal of the hemorrhoidal vascular plexus, resulting in low blood flow to the anus through the collateral circulation of the inferior rectal artery[16].

Recurrence of hemorrhoids is a major concern for patients and indicates failure of surgery; thus, it is a matter of great concern among both patients and surgeons. M-PPH had a significantly lower recurrence rate than PPH. This recurrence rate is comparable to that reported in previous research on the M-PPH[20]. The most plausible reasons are the lower level placement of the purse-string sutures and the use of double purse-string sutures. The closer the anastomosis is to the dentate line, the better the result with the lower anastomosis pulling up the hemorrhoids more effectively. With the anastomosis scarring, the anal cushions near the dentate line are turned inward and are better fixed, while the double purse-string sutures also allow for more tissue traction towards the rectum for more effective lifting by the anal cushions[24]. On the other hand, because of patients’ misperceptions regarding recurrence, we think that the relapse rate may be overestimated. It is hard for patients to distinguish between skin tags and prolapse recurrence. Among the 50 patients examined by Ganio et al[25], only 6 of the 9 patients who reported recurrent hemorrhoidal prolapse in telephone interviews were found to have recurrence on proctologic examination. A recent meta-analysis on the identification of residual skin tags and recurrence concluded that the high recurrence rates in the literature are often attributed to the misrecognition of residual skin tags[26]. We confirmed this at the post-operative outpatient follow-up. The incidence of skin tags and hemorrhoid prolapse is significantly higher after PPH than after conventional techniques[11]. It is unclear whether skin tag removal reduces the incidence of symptomatic recurrent prolapse. Larger, well-designed clinical studies are needed to validate the usefulness of respecting the M-PPH postoperative skin tags.

A potential limitation of this study is its retrospective nature; hence, a prospective randomized controlled study is needed to confirm these findings. Another limitation is that, although a phone interview is a convenient and easy method of data collection, a direct clinical examination of all patients and a full clinical evaluation during the follow-up is lacking. Patients are often not able to distinguish skin tags from real hemorrhoids, and thus, the recurrence rate may be overestimated.

Hemorrhoidal prolapse is a common benign disease with a high incidence. The procedure for prolapse and hemorrhoids (PPH) remains the first-line therapy for hemorrhoids. Although it is related to less post-operative pain, faster recovery and shorter hospital stays, the postoperative recurrence rate is higher than that of the Milligan-Morgan hemorrhoidectomy (MMH).

To assess the clinic efficacy and patient satisfaction towards treating severe hemorrhoids through M-PPH, PPH and MMH.

M-PPH has many advantages for patients with severe hemorrhoids (Goligher stage III/IV) with a low rate of anastomotic bleeding and recurrence while gaining a very high rate of patient satisfaction.

The lower anastomosis can pull up the rectal mucosa more effectively resulting in a lower the recurrence rate.

The prospective randomized controlled trial is a more scientific and rigorous research method and is the best method for the future research.

We gratefully thank the patients and their families for participating in this study.