Axenfeld-Rieger syndrome (ARS) is an autosomal dominant genetic disease characterized by ocular developmental disorders and its association with torsion of wandering spleen (WS) has not been reported to date to the best of our knowledge. This study aimed to describe a rare case of ARS observed at our emergency department.

A 25-year-old female presented with a constant lower abdominal pain of increasing severity. Diagnostic computed tomography with intravenous contrast material showed a non-homogenously enhanced splenic parenchyma with a twisted vascular pedicle. Further, an emergent laparoscopic exploration was performed, and an ischemic spleen without its normal ligamentous attachments was noted. Notably, the spleen did not regain its normal vascularity after detorsion; thus, we performed the laparoscopic total splenectomy. The postoperative course was uneventful, and the patient was discharged on the 5th postoperative day. This case demonstrates a rare association of WS and ARS.

Early diagnosis of WS in the emergency department is important to prevent pedicle torsion or splenic necrosis and to avoid splenectomy.

Core tip: We demonstrated a rare case of Axenfeld-Rieger syndrome (ARS) and its association with torsion of wandering spleen. ARS is an autosomal dominant genetic disease characterized by ocular developmental disorders. This 25-year-old female presented with a lower abdominal pain of increasing severity, and she was diagnosed splenic torsion by diagnostic computed tomography. An emergent laparoscopic exploration was performed, and an ischemic spleen without its normal ligamentous attachments was noted. The spleen did not regain its normal vascularity after detorsion; thus, we performed the laparoscopic total splenectomy. This case demonstrates a rare association of wandering spleen and ARS.

Axenfeld-Rieger syndrome (ARS) is an autosomal dominant genetic disease characterized by ocular developmental disorders affecting the anterior structures of the eye, including the cornea, iris, lens, ciliary body, and drainage structures[1]. Although ARS is best known for its correlation with the onset of glaucoma, the malformation is not restricted to the eye because systemic issues such as tooth abnormalities, redundant periumbilical skin, facial dysmorphism, and omphalocele are occasional findings[2]. Wandering spleen (WS) is characterized by displacement of the spleen from its normal position with an excess mobility. Although it’s etiologies are multifactorial, WS is often associated with hypermobility of the spleen because of laxity or absence of the ligaments that fix spleen to its normal position[3]. Therefore, the spleen drifts freely within the abdominal cavity under the diaphragm, resulting in torsion of its vascular pedicle and an acute abdominal pain. In the current report, a patient with ARS and a nontender soft tissue mass in the left lower abdomen was admitted to the emergency department with the chief complaint of abdominal pain. The mass was later confirmed to be an ectopic spleen.

A 25-year-old Asian woman presented with a constant left lateral lower abdominal pain of increasing severity for 3 d, associated with nausea and vomiting for the previous 3 d at our emergency department.

She had left lower abdominal pain initially and then became diffuse abdominal pain with quality of cramping. She visited other hospital at first and painkillers were prescribed. However, the symptoms did not relieve.

She had been diagnosed with ARS and congenital glaucoma since her infancy and she underwent trabeculotomy at the age of 1-year-old.

Her family history was unremarkable.

Laboratory findings were all within the normal range.

Computed tomography (CT) with intravenous contrast material showed a non-homogeneously enhanced splenic parenchyma with a twisted vascular pedicle (Figure 1). Moreover, the spleen was seen below the pancreatic tail in the left iliac fossa instead of its standard anatomical position. 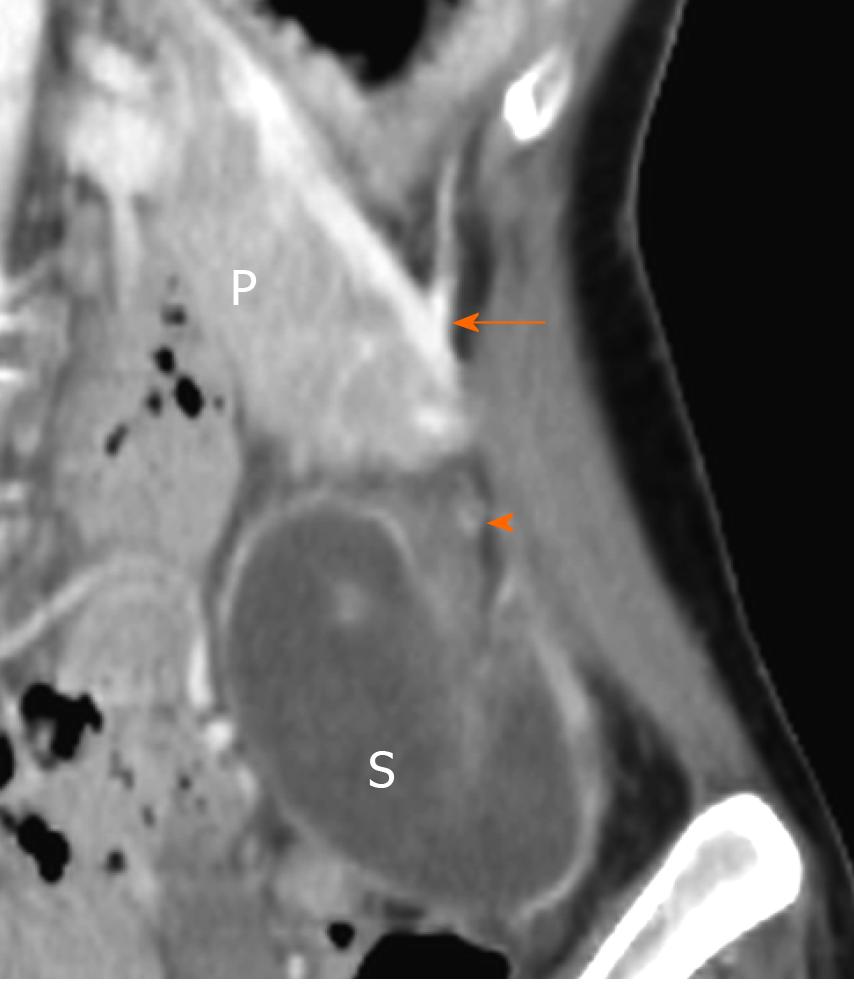 CT with intravenous contrast material showed spleen torsion, which was below the pancreatic tail in the left iliac fossa instead of its standard anatomical position.

The patient underwent an emergent laparoscopic surgery. During the surgery, an ischemic spleen with adhesion bands to its neighboring peritoneal tissue was discovered. After sharp adhesiolysis, it was observed that the spleen’s normal ligamentous attachments were absent, and the spleen rotated around its vascular pedicle. The spleen did not regain its normal vascularity after detorsion; thus, a total splenectomy using the Endo GIA was performed to aid the vascular ligation with ease.

The histopathological examination revealed hemorrhagic necrosis of the spleen. Her postoperative course was uneventful, and she was discharged on the 5th postoperative day.

WS is an uncommon clinical finding wherein the spleen is located at a position other than its usual anatomical position. In addition, it may be attributed to the absence or laxity of the supporting structures which could be either congenital or acquired[3,4]. Although WS can be diagnosed in all age groups, it is 10 times more common among women in adulthood and is seen more often in women of reproductive age[5,6]. Patients with WS may be asymptomatic, and the condition is only detected as a mobile mass during physical examination or on radiological studies carried out for other irrelevant reasons[1,7]. Although the majority of the cases are asymptomatic, torsion of a WS is seen in approximately 0.2%-0.3% of splenectomies[3]. Further, correct preoperative diagnosis is complex because the condition can be confused with other acute abdominal conditions such as acute appendicitis, ovarian torsion, or cholecystitis[3]. Furthermore, various imaging modalities can be used to detect a suspected WS. Among these imaging modalities, ultrasonographic evaluation is an inexpensive and noninvasive method used to characterize a WS with ischemia in an emergency room setting[8]. Additional contrast-enhanced CT would further complement the diagnosis by demonstrating signs indicating splenic pedicle torsion[9]. In this study, CT images of the patient showed an intraparenchymal hypodense area with poor contrast enhancement, leaving a residual rim of enhancing capsule supplied by small capsular vessels (rim sign), which is suggestive of parenchymal infarction[10].

The exact cause of the spleen drifting from its usual position in our patient remained uncertain. The patient did not have a family history of WS, nor did she have specific laboratory or clinical findings to conclude the diagnosis. ARS has been associated with abdominal wall anomalies from redundant umbilical skin, umbilical hernia, or omphalocele[1,2]. Several cases with a WS accompanied with omphalocele have been reported previously[11,12]. In addition, herniation of intra-abdominal organs through the abdominal wall defect may cause rotation anomaly of the stomach and the spleen or an inadequate fusion of the peritoneum. Because duplication of the peritoneum makes up ligaments that suspend the spleen, failure of this embryological process may later contribute to irregular ligamental development. Meanwhile, an absence of ligamentous attachment would eventually result in a WS and torsion around its pedicles. Moreover, mutations in the transcription factors PITX2 and FOXC1 are associated with the pathogenesis of ARS[1,2,13]; earlier studies have reported that PITX2 is necessary in order to induce cellular behavior within the dorsal mesentery for leftward tilt during the gut morphogenesis[14]. Therefore, PITX2 mutation linked to ARS can promote gut malrotation and in turn, abnormal ligamentous development.

In patients presenting with an acute abdominal pain, detorsion and splenopexy would be feasible surgical options when there are no signs of infarction, hypersplenism, or thrombosis[3]. Further, results of splenopexy have been reported to be positive in preventing complications of WS while preserving the splenic function[4,7]. For this case, it did not regain its normal vascularity after detorsion; therefore, laparoscopic total splenectomy was performed. This validates any delay in diagnosis that can lead to severe consequences. Hence, laparoscopic splenectomy would be an optimal method for WS because it is free from attachments and other organs. Nonetheless, partial splenectomy of the totally strangulated spleen is generally impractical because the torsion involves the vascular pedicle, although a partial splenectomy with splenopexy for a partial infarcted WS has been reported in the literature[15].

Early diagnosis of WS in the emergency department is important to prevent pedicle torsion or splenic necrosis and to avoid splenectomy.