Here we studied a girl with KBG syndrome and collected the data of children with KBG syndrome accompanied by short stature from previous studies before and after GH therapy. The girl was referred to our department because of short stature. Physical examination revealed mild dysmorphic features. The peak GH responses to arginine and clonidine were 6.22 and 5.40 ng/mL, respectively. The level of insulin-like growth factor 1 (IGF-1) was 42.0 ng/mL. Genetic analysis showed a c.2635 dupG (p.Glu879fs) mutation in the ANKRD11 gene. She received GH therapy. During the first year of GH therapy, her height increased by 0.92 standard deviation score (SDS). Her height increased from -1.95 SDS to -0.70 SDS after two years of GH therapy. There were ten children with KBG syndrome accompanied by short stature who received GH therapy in reported cases. Height SDS was improved in nine (9/10) of them. The mean height SDS in five children with KBG syndrome accompanied by short stature increased from -2.72 ± 0.44 to -1.95 ± 0.57 after the first year of GH therapy (P = 0.001). There were no adverse reactions reported after GH treatment.

GH treatment is effective in our girl and most children with KBG syndrome accompanied by short stature during the first year of therapy.

Core tip: KBG syndrome is a rare autosomal dominant disorder. The percentage of height below 10th centile is relatively high at 66%. Children with KBG syndrome accompanied by short stature could benefit from growth hormone therapy.

KBG syndrome (OMIM 148050) is a rare autosomal dominant disorder first reported by Herrmann et al[1] in 1975. They described seven affected individuals from three unrelated families. The KBG syndrome was named after the surname initials K, B, and G of the three original families. It is characterized by developmental delay, intellectual disability, specific craniofacial features, macrodontia of the upper central incisors, short stature, and skeletal abnormalities[2]. KBG syndrome is caused by mutations in the ANKRD11 gene located on chromosome 16q24.3, which encodes an ankyrin repeat domain-containing cofactor[3]. Over 110 cases have been reported in the literature so far[4]. KBG syndrome should be distinguished from 16q24.3 microdeletion syndrome. Although the clinical manifestations of these two syndromes overlap, there are some differences in phenotypes. In 16q24.3 microdeletion syndrome, short stature and delayed bone age are often not observed[5].

A Chinese girl aged 5 years and 6 mo presented to the Pediatric Department of our hospital complaining of short stature.

The girl was born at term as the only child of her parents. Her birth weight was 3400 g [0.58 standard deviation score (SDS)], and her length was 50 cm (0.1 SDS). Pregnancy, delivery, and the neonatal period were uncomplicated. At 2 mo of age, a developmental delay was found by regular physical examination. She received rehabilitation therapy for 4 mo intermittently. She started walking at 17 mo of age and spoke her first words at 12 mo. Her height was below the mean for age (less than the 3rd percentile). Ordinarily, she was quiet, short-tempered, and irritable.

Her past medical history was unremarkable except for developmental delay.

No specific personal history of disease was recorded. Her parents were healthy, with no significant family history. Her mother’s height was 160 cm, and his father’s height was 171 cm. The target height for the proband was 159.0 cm (-0.30 SDS).

Her bone age was 4.5 years. Bone age was estimated using the atlas of Greulinch-pyle. Pituitary magnetic resonance imaging (MRI) and echocardiography were normal.

She had a borderline intellectual disability with a total IQ of 79 (WISC-R).

A novel de novo mutation (c.2635 dupG, p.Glu879fs) was identified in the ANKRD11 gene. The variant was interpreted as pathogenic based upon the de novo variant in a family without a disease history (PS2) according to the guidelines of ACMG. KBG syndrome was confirmed. Sanger sequencing was employed for our girl and her parents (Figure 1). No mutation of the ANKRD11 gene was present in her parents. 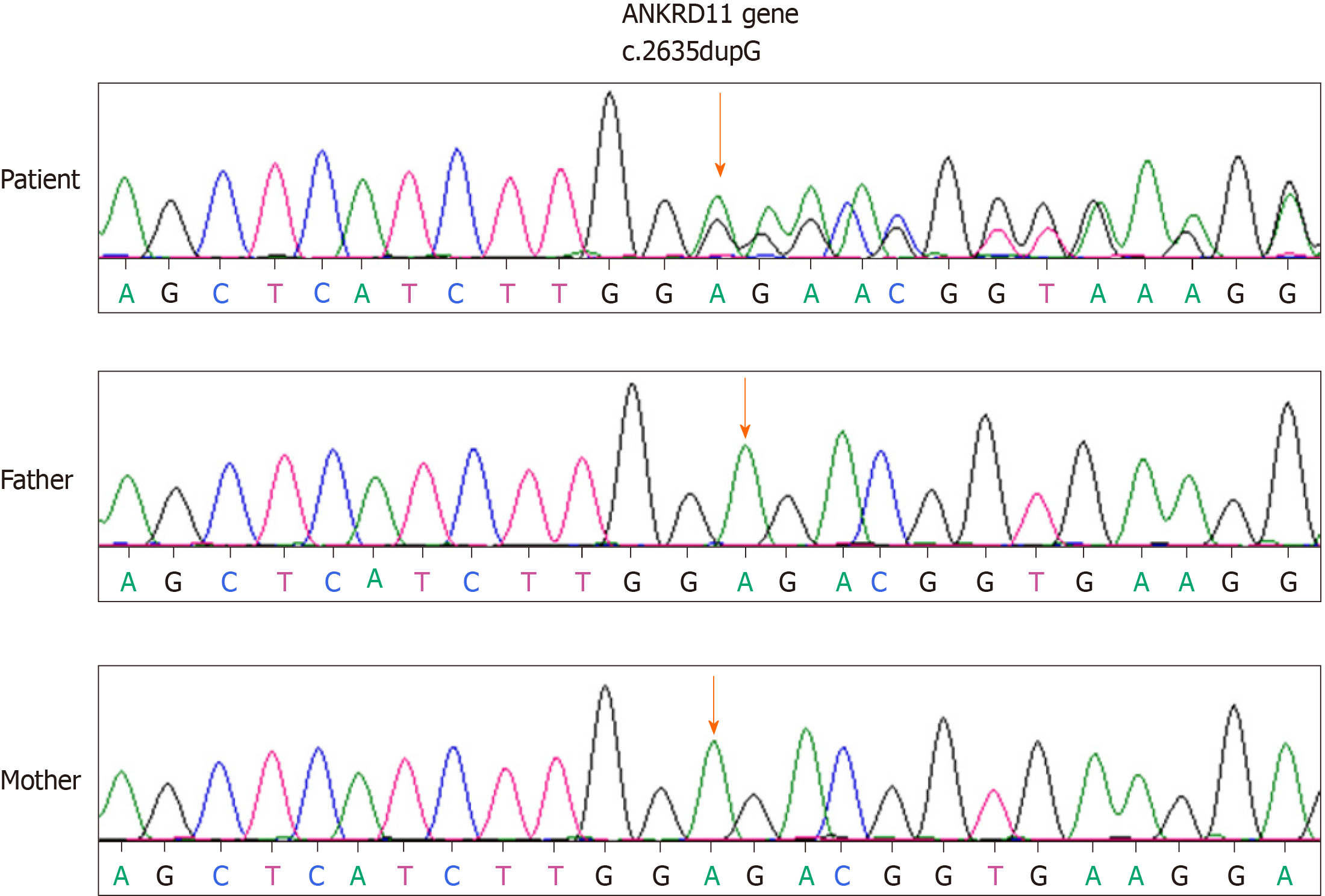 Figure 1 Electropherograms of the patient and her parents. A de novo heterozygous single base pair duplication at position 2635 (c.2635 dupG) in the ANKRD11 gene was found in the patient, and was not inherited from her parents.
TREATMENT 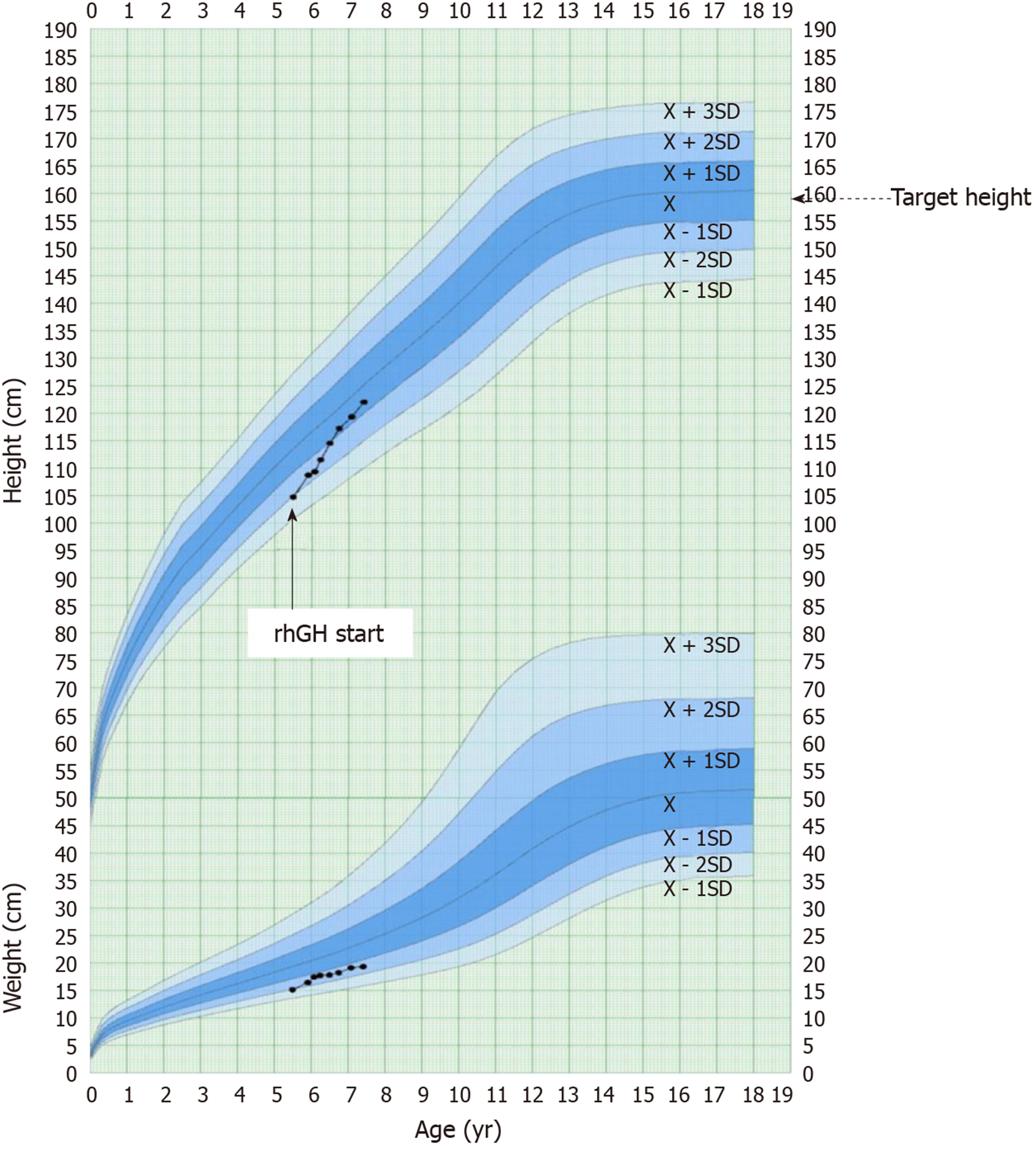 Figure 2 Changes of height and weight in our patient with KBG syndrome during 2 years of growth hormone therapy. GH: Growth hormone.
DISCUSSION

Clinical features of children with KBG syndrome accompanied by short stature who received GH therapy are shown in Table 1 (P1-P8). P8 is our patient. Two children (P9 and P10) without detailed clinical information are not shown in Table 1. The birth length in three (3/5) children was below the 50th percentile. Height SDS was below the 3rd percentile in all children (10/10). GH deficiency was suggested in four (4/6) children. Levels of IGF-1 were low in three (3/4) children. Delayed bone age was found in six (6/8) children. 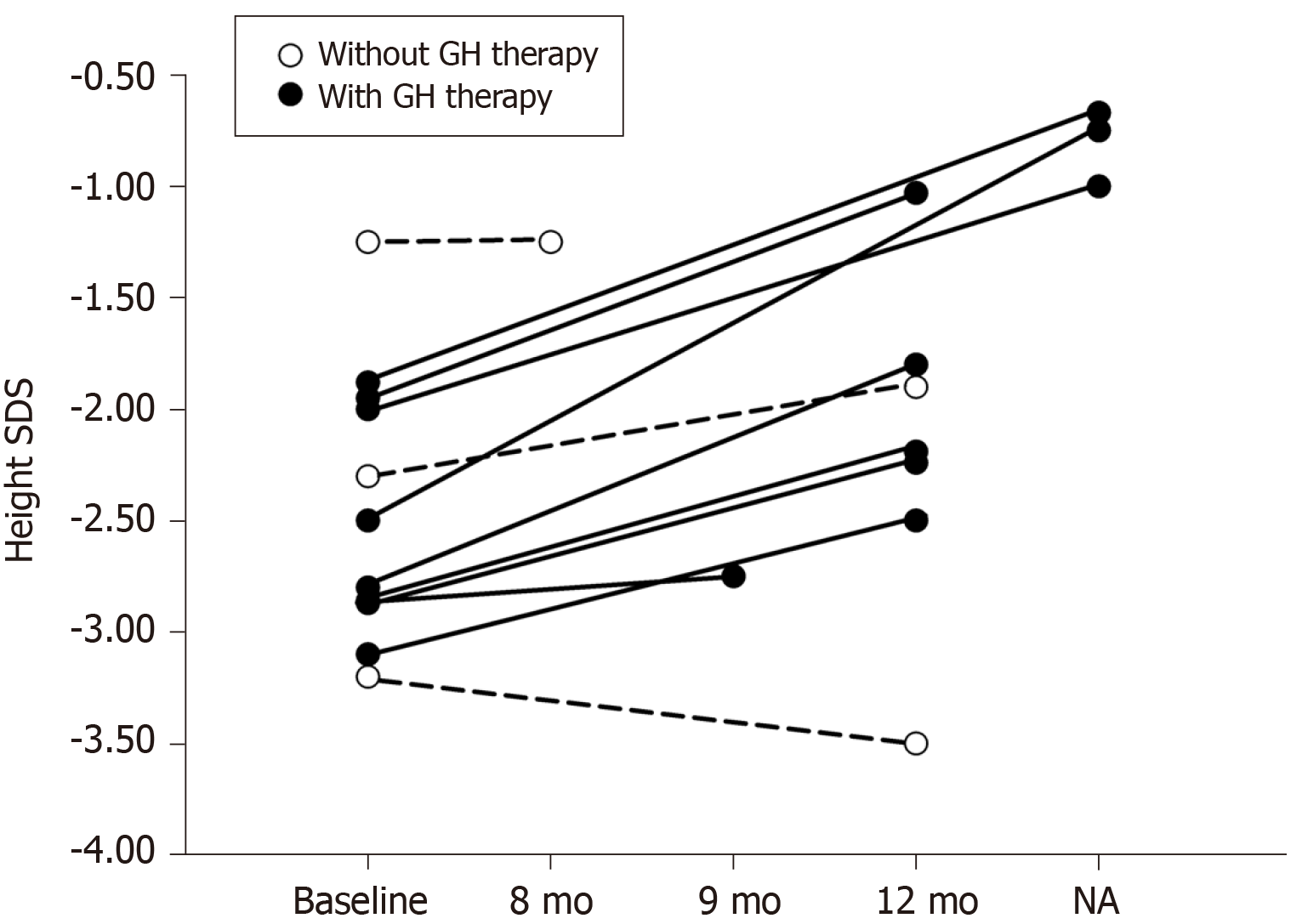 The use of GH therapy obviously promoted growth in the girl with KBG syndrome accompanied by short stature. There were no abnormalities in thyroid function or glycemic status during the two years of follow-up. In the previous literature, most children with KBG syndrome showed a good response to the first year of GH therapy compared with untreated children affected by KBG syndrome. Our results are consistent with other reported cases[6]. Based on the review of previously reported cases and the experience obtained from our KBG case, we conclude that GH treatment is effective in our girl and most children with KBG syndrome accompanied by short stature during the first year of therapy.

The authors are grateful to the patient and her parents for participating in the study.